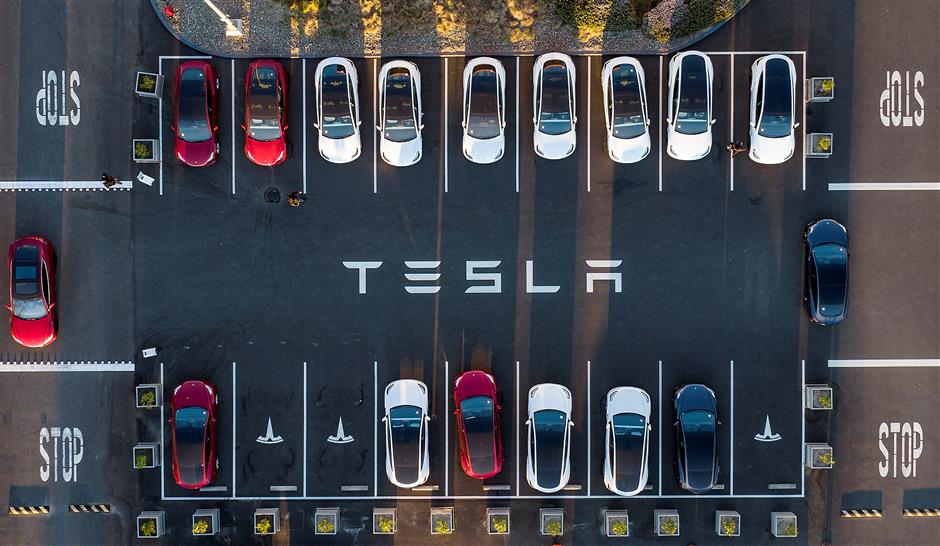 In this file photo taken on February 10, 2022, an aerial view shows cars parked at the Tesla Fremont Factory in Fremont, California.

Tesla reported another round of record quarterly profits on Wednesday while confirming its long-term growth outlook in spite of concerns about rising competition and macroeconomic headwinds.

Elon Musk's electric vehicle (EV) company reported fourth-quarter profits of US$3.7 billion, up 59 percent from the year-ago period as revenues jumped 37 percent to US$24.3 billion.

The results were fueled by a 31 percent rise in vehicle deliveries compared with the year-ago period.

The EV giant, which startled investors earlier this month by announcing vehicle price cuts in the United States and Europe, acknowledged challenges such as rising interest rates and an "uncertain macroeconomic environment."

Tesla said it was accelerating its "cost reduction roadmap," while working to ramp up production.

"In any scenario, we are prepared for short-term uncertainty," said Tesla, while adding that its "relentless cost control and cost innovation" will allow it to navigate 2023 better than rivals.

The recent US and European price cuts – which followed similar actions last year in China – have prompted debate among analysts on whether they are a sign of weakness, or a shrewd tactic to increase market share.

Musk touted the move in a conference call on Wednesday, saying Tesla has seen increased orders since it was announced.

The company has described its long-term plan as seeking to chalk up production growth of 50 percent per year, on average.

Tesla's earnings report on Wednesday reasserted that long-term forecast, but said it would likely only produce 1.8 million vehicles in 2023, about 31 percent above the 2022 production.

It also predicted a 37 percent growth in deliveries, at 1.3 million.

Musk has noted that Tesla's output has been constrained by economy-wide supply chain and raw material shortages, but said on Wednesday that output could reach two million in 2023 if there is a "smooth year" free of disruptive surprises.

Tesla confirmed plans to launch production of its Cybertruck in 2023 at its massive Texas plant.

Musk said the volumes of the Cybertruck would not be significant in 2023, but would be meaningful in 2024.

Shares of Tesla have fallen about 50 percent from their year-ago level, reflecting worries about the introduction of EVs from other automakers, the drag from a slowing economy and anxiety that Musk's other pursuits such as running Twitter are hindering the company.