Can Costco buck jinx of foreign retailers? Yes – on the first day! 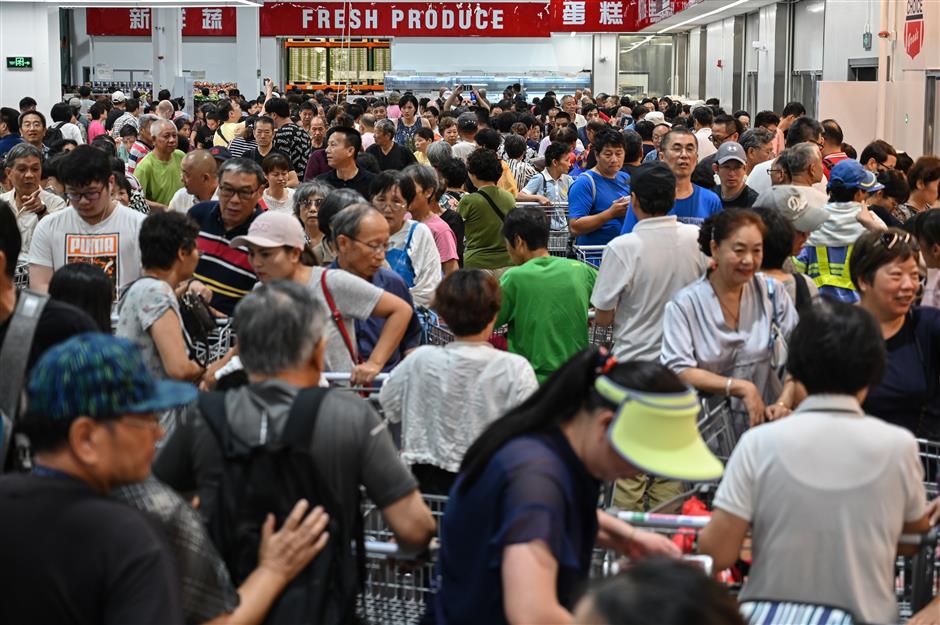 People visit the first Costco outlet in China, on the stores opening day in Shanghai on August 27, 2019.

The opening of Costco’s first store on the Chinese mainland has proved to be quite a spectacle — so many people swarmed into the store in Shanghai's remote Minhang District that people arriving at the store had to wait for up to three hours for a parking space and those lucky enough to get in needed to spend another two hours to pay for their purchase.

While Costco didn't reveal how many visitors were at the store on Tuesday, the US store said it will still open on Wednesday, but will control the number of shoppers in the store under 2,000.

Bulk purchasing often comes at bargain prices and many customers said they wanted to buy as much food and groceries as possible on their first visit.

Unlike other supermarkets that mostly sell fresh food and daily necessities, the new store also has jewelry and luxury handbags from big names such as Prada, Burberry and Chanel. It also has Fjällräve's Kanken and MCM backpacks.

Costco is also betting on its private label Kirkland, which covers a wide range of products such as fresh milk, nutritional supplements and hygiene products, to draw shoppers. 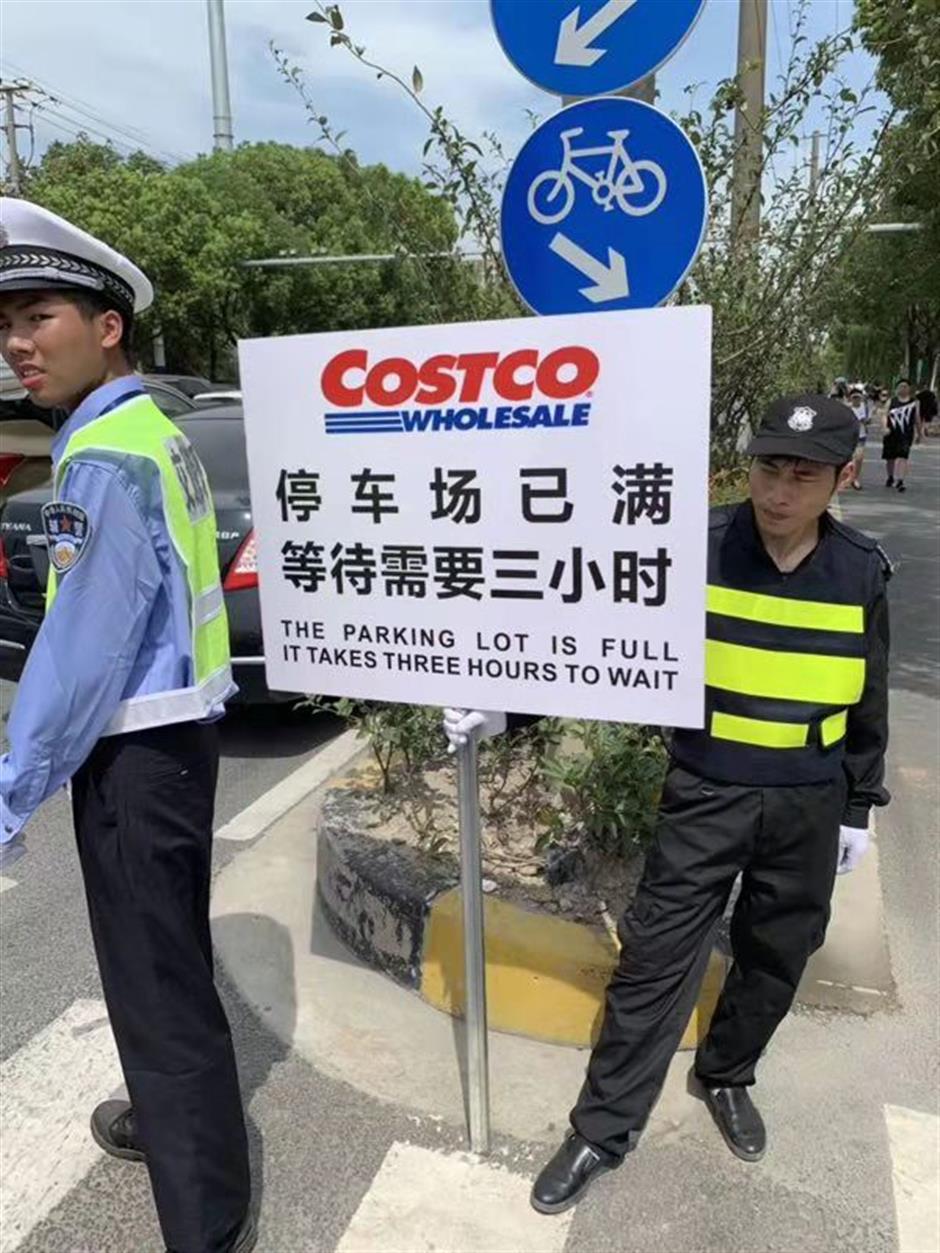 The store falls victim to its own popularity.

Costco is the latest in a long line of foreign retailers trying its luck in a fickle Shanghai consumer market.The bulk wholesaler is operating on a membership-only format. Shoppers will have to pay 199 yuan (US$28.4) a year for a membership. Initially at least, that’s a discount to the normal annual fee of 299 yuan.

“Chinese consumers are now more willing to paying for membership benefits, and Costco’s model is a good supplement to the existing retailing model,” commented Kantar Worldpanel China general manager Jason Yu. “It still needs to prove that the membership is of value to shoppers.”

Shanghai’s consumer market is littered with the dashed ambitions of multinational retailers who sought to cash in on China’s rising disposable income. Among those that have pulled out of the mainland market are UK-based Marks & Spencer and US-based Home Depot. French retail giant Carrefour announced in June that it is selling 80 percent of its China unit to domestic retailer Suning, and Germany’s Metro AG is trying to sell off its China business.

In China, Costco will be going head-to-head with US-based Walmart’s upmarket, membership arm Sam’s Club, which opened its first mainland store in Shenzhen in 1996 and has since expanded.

Sam’s charges an annual membership fee of 260 yuan and a premium option at 680 yuan that includes extra services such as dental care.

Costco didn’t reveal any expansion plans beyond Shanghai, except to say its focus will be on the Yangtze River Delta, a relatively wealthy region in China.

Costco said its goal is to sign up 100,000 members in the city, a critical point for sustainability of a physical outlet. It will be keeping a close eye on the membership renewal rate, which is around 90 percent globally.

Its major target are well-off families living within a 45-minute-drive radius from the store, said Richard Zhang, senior vice president of Costco Asia. The store’s bulk-purchase model will stock some 3,400 different bar codes.

Shanghai shoppers are spoiled for choices. They can pick up their smartphones and see a mind-boggling array of merchandise, compare prices and have purchases delivered to their doors.

Getting them into the Costco store and keeping them loyal will be the challenge for the US retailer, which operates 776 outlets worldwide. 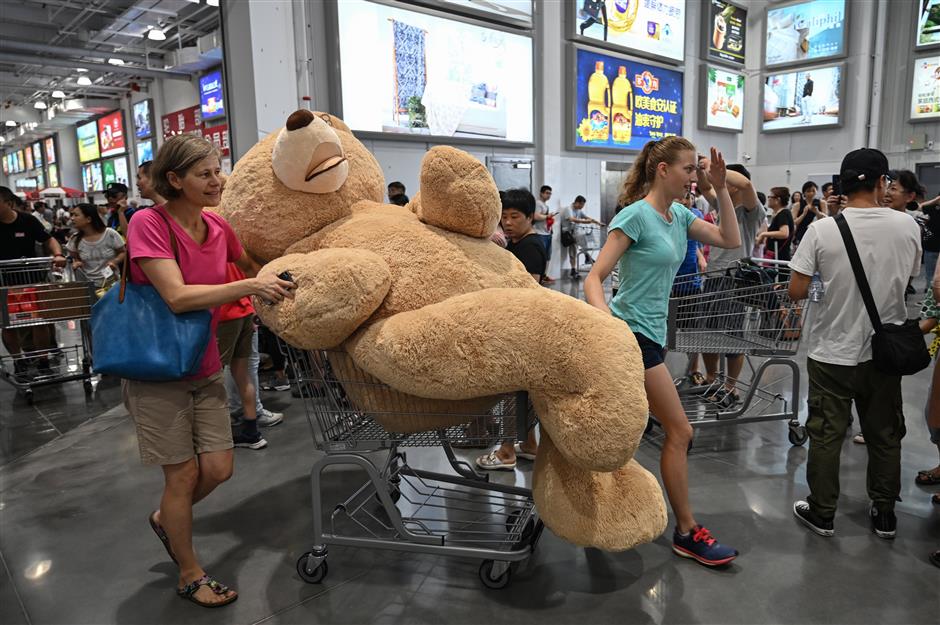 A woman pushes a trolley with a teddy bear at the first Costco outlet in China, on the stores opening day in Shanghai on August 27, 2019.

The store will have to win over doubters like Shanghai office worker Daisy Hu, who lives in Minhang District with her husband. She said she buys fresh goods and pet food from nearby supermarkets and from online platforms.

“Driving and carrying bulk purchases home could take at least two or three hours,” she said. “Waiting for the delivery is much easier.”

Costco said it is considering offering online orders and delivery service, but no timetable was given.

Chinese consumers have proven to be fickle shoppers. They are demanding higher-quality goods and competitive prices. Discount bulk purchases are already on offer, with Internet giants setting up logistics arms and linking up with existing supermarket chains.

To survive in such a market, foreign retailers are adopting new strategies to woo consumers. Aldi, a German discount supermarket chain, made its first physical presence in China with two outlets in Shanghai’s Jing’an and Minhang districts in June. The company is working with a number of domestic manufacturers to offer home care, clean wipes and hygiene products with private label brands in the Shanghai stores.

Aldi stores are smaller than Costco’s, fitting into community neighborhoods they seek to serve. The stores offer fresh fruit and vegetables, takeaway bento boxes, bakery goods and a variety of imported wines.

Home delivery within the Outer Ring Road is available for purchases of 299 yuan or more.

Sam’s Club expanded its offerings to include wine tasting, a pharmacy, a jewelry counter and an optical center after renovating its Pudong store last year.

People try to get a roast chicken at the first Costco outlet in China, on the stores opening day in Shanghai on August 27, 2019.

The company opened a second store in Shanghai in June, adding features such as home décor items. Its 8,000 different bar codes are still significantly lower than many supermarkets.

Sam’s has placed some of its best-selling items, such as fresh food and baby and maternity products, in warehouses around the urban area to facilitate home delivery within an hour after orders are placed.

The German wholesale retailer Metro hasn’t been quite so lucky. Its initial targets were grocery store owners and canteen businesses, but the response was lukewarm.

Its timing for wholesale, membership retailing in China was off. Automobile ownership wasn’t quite so prevalent when it first entered China in 1996, and many family shoppers were put off when they got to checkout counters and were told they needed a membership card. The bulk purchasing model didn’t really work well back then.

In March, Metro announced it was seeking buyers for its China business and hopes to conclude a deal by September.

Domestic retailers, too, have danced around the membership concept.

Costco claims that the “touch and taste” experience is a crucial part of consumer shopping. It said it will entice new buyers through endorsements by existing members. But without powerful domestic partners, that may prove difficult.

Consumers have accepted new models like Freshippo because of their long association and trust in parent group Alibaba.

Costco’s challenge is to build trust as the go-to place for almost every type of product. That is a slow, long-term process in a rapidly changing consumer market.