Japan’s economy braced for its worst postwar slump even as first-quarter GDP contracted less than initially thought, as the coronavirus crisis slams the brakes on global growth and raises pressure on Tokyo to cushion the blow to business and consumers.

Banks are doing their bit to help as lending rose at the fastest annual pace on record in May, a sign firms were tapping loans to meet immediate funding needs to survive slumping sales from the pandemic.

While US and European policymakers have shifted from crisis-response to efforts to prop up growth, Japan is struggling to do so as it continues to focus on preventing a second wave of infection.

But few analysts were hopeful about the outlook for the year since capital spending data used to calculate the revised figures lacked enough responses — most struggling firms appear not to have participated in the survey — and will be updated in July.

On the whole, yesterday’s revised gross domestic product estimate confirmed Japan had slipped into recession — defined as two straight quarters of contraction — for the first time in 4-1/2 years, even before lockdown steps to contain the virus were put in place in April.

“The upward revision to Q1 GDP displayed in the revised estimate is cold comfort given that output is plummeting this quarter,” said Tom Learmouth, economist at Capital Economics.

A series of recent data, including exports, factory output and jobs figures, suggested Japan is facing its worst postwar slump in the current quarter, a period when Prime Minister Shinzo Abe announced a state of emergency requesting citizens to stay home and businesses to close.

Although the emergency was lifted in late May, the economy is expected to recover only moderately in coming months, underlining the pandemic’s sweeping impact. 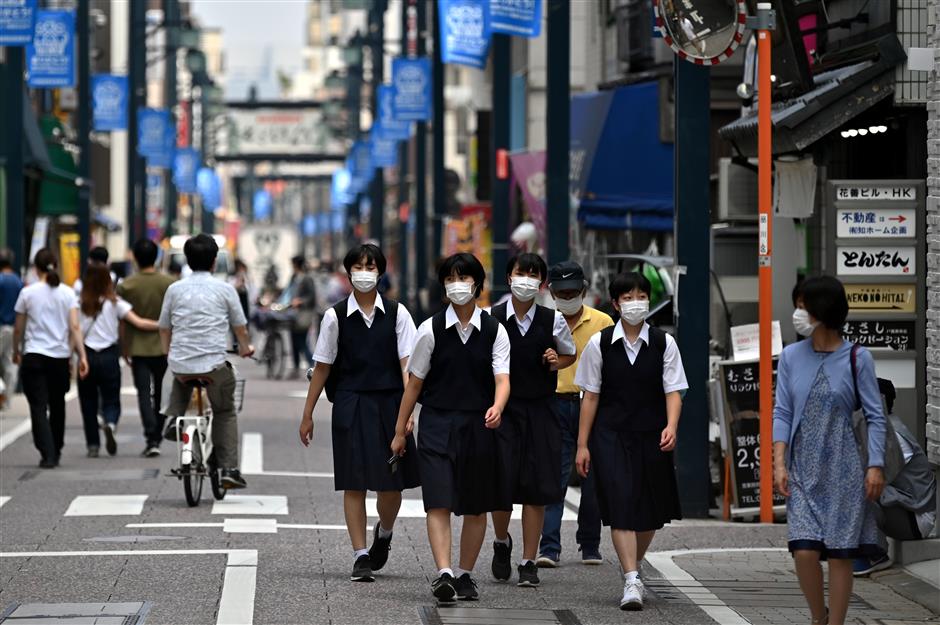 People walk on a street in Tokyo yesterday. Japan’s economy braced for its worst postwar slump even as first-quarter GDP contracted less than initially thought amid the COVID-19 crisis.