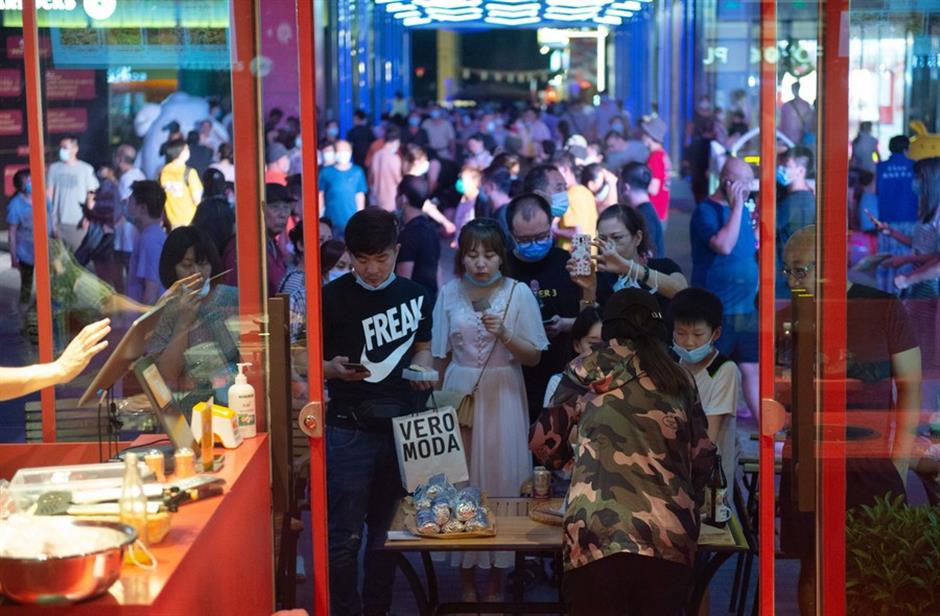 People buy snacks during a shopping carnival held in the Wangjing subdistrict as part of a consumption stimulus plan in Chaoyang District, Beijing, capital of China on August 8, 2020.

As the COVID-19 epidemic tapers off in the country and pent-up consumption demand gradually unleashes, China's economic recovery in the second half of the year will gain more momentum.

Data from the National Bureau of Statistics echoed with the trends. China's retail sales of consumer goods rose by 0.85 percent month on month in July, a moderate increase from 0.83 percent in June, maintaining a six-month streak of expansion after a contraction of 10.91 percent in January.

After suffering a blow from COVID-19, which temporarily shuttered many stores, restaurants and movie theaters, Chinese consumers are back into a spending spree.

As of Sunday morning, war epic film "The Eight Hundred" continued to smash records, with the total box office revenue hitting a new high of 1.8 billion yuan (about US$261 million). It is the first movie to make over 1 billion yuan in the world's second-largest box-office market since the COVID-19 outbreak.

Shake Shack, a New York burger brand, opened its first restaurant in Beijing this month. Despite downpours in the city on the opening day of the store, food lovers queued up and waited for hours to take a bite of the popular burgers, snacks and cold beverages.

Randy Garutti, CEO of Shake Shack said China is one of the most important markets for Shake Shack in the world, and Beijing, as China's capital and an international metropolis, represents the new frontier of consumption.

Alibaba Group reported year-on-year revenue growth of 34 percent to 153.8 billion yuan for the quarter that ended on June 30, 2020. The company's net profit attributable to shareholders was 47.59 billion yuan. The profit surge was mainly due to strong performances in online retailing and cloud computing.

"What's happening in China today is going to happen in other markets to a lesser or greater degree depending on the market," Kanaiya Parekh, expert partner at Bain, said in an interview with CNBC. "People need to be looking at China, especially with regards to the future of retail."

Buoyed by the recent boost in consumer sentiment, analysts believe that the country's consumption will continue to rebound. Favorable factors such as continued government policy support, new promotion measures by the enterprises and increasing consumer confidence will pave the way for a stronger recovery in the second half.

The National Consumption Promotion Month, jointly organized by the Ministry of Commerce and the China Media Group, will kick off on Sept. 9 and continue for the entire month to further bolster market sentiment, boost consumer confidence and promote replenishment of consumption.

During the promotional campaign, over 10,000 key enterprises and major e-commerce platforms in large and medium-sized cities of 31 provincial-level regions across the country will host a series of promotion activities, which will integrate online and offline modes, goods and services marketing, as well as sectors including commodity, travel, culture and entertainment.

Qu Hongbin, chief China economist at HSBC, said in a research note that the key to reviving consumption lies in keeping employment stable and improving residents' income, which will also act as the main policy focus in the second half of the year.