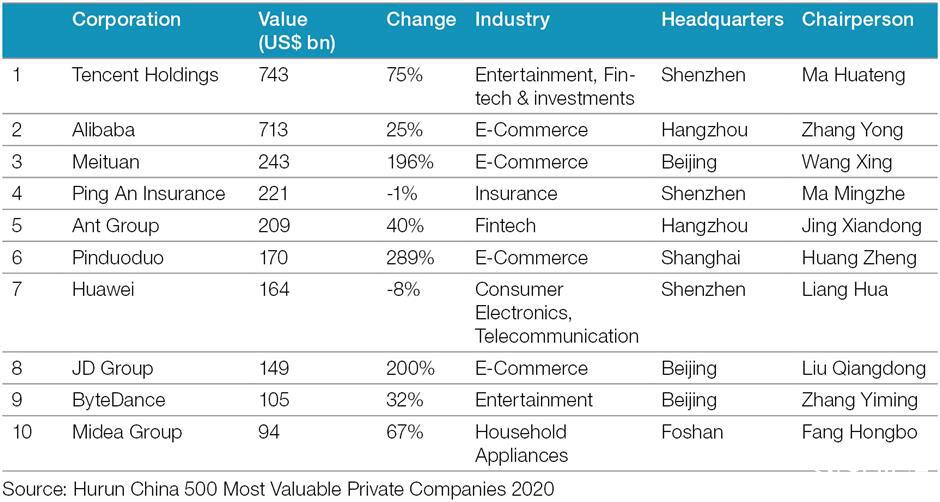 Top private Chinese enterprises proved to be resilient with the combined market value of the top 500 companies rising 55 percent from a year ago, according to the latest ranking by Hurun Research.

Hurun Research has calculated the market value of listed private firms based on their closing stock prices as of October 15 this year, with all of them non-state-controlled enterprises with headquarters on the Chinese mainland.

Tencent grew 75 percent, or US$300 billion in market valuation, to become the most valuable private company with a market cap of US$743 billion, knocking last year’s top ranked Alibaba to second place.

The rapid rise of the digital and new economies after the pandemic, sharp gains in the stock markets and a flurry of new listings contributed to the valuation increases.

As many as 120 companies are new to the list this year, with average value among the top 500 standing at US$16.5 billion, soaring 55 percent from a year ago.

The booming of the private economy in China is evident with the value of the top 10 private companies up 10 folds in the past decade.

"Some of the top enterprises made only relatively small revenue, but created massive shareholder value and the combined value of Tencent and Alibaba has exceeded the total value of the top five Chinese state-owned enterprises," commented Rupert Hoogewerf, chairman and chief researcher of Hurun Research.

Health care overtook advanced manufacturing and real estate to become the top industry on the ranking. As many as 93 health-care companies made it into the top 500 list, such as Hengrui Medicine, Mindray Bio-Medical Electronics and WuXi AppTec, bringing the total number up 46 percent from last year.

BYD and Nio both entered the top 20 amid the growing popularity of smart automobile manufacturers. E-car makers Li Auto and Xpeng Motors are also the fastest growing in terms of percentage change in market valuation.

The Shanghai Stock Exchange is the preferred listing exchange for the top 500 private firms with 121 listing, followed by the Hong Kong Stock Exchange and US bourses.