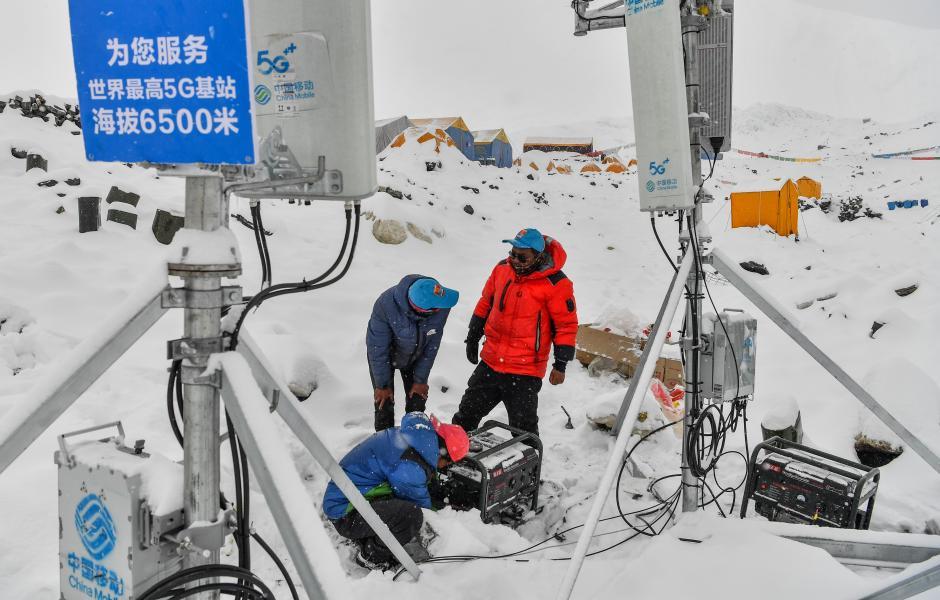 Staff members of China Mobile test the signals of the 5G base station built at an altitude of 6,500 meters at the advance camp of Mount Qomolangma in southwest China's Tibet Autonomous Region.

Four years ago, Peng Xiaobo, who had been engaged in the research, development and management of spacecraft technology for 25 years, established the Beijing Interstellar Glory Space Technology Co, to pursue his dream of commercial spaceflight.

The startup has successfully launched many sounding rockets. Peng, CEO of the company, believes the value of the aerospace industry has not been fully tapped. “Our goal is to become a global leader in commercial spaceflight,” he said.

Despite the limited scale of the company, its core competitiveness in the specific field has highlighted China’s emerging “industries of the future,” a new buzzword that points out the key direction of China’s most recent round of industrial revolution.

Although there is yet a clear definition, experts believe that industries of the future share the features of boasting leading-edge technologies and the prospect of explosive growth.

China has accelerated the layout of this major cause with provinces and cities such as Beijing, Hebei and Anhui gearing up for developing their “future industries” by making use of local advantages.

Origin Quantum, a 3-year-old startup focusing on quantum computers and related technologies, recently rolled out an operating system called Origin Pilot. The system will effectively improve the overall utilization of quantum chips and shorten the time it takes to put a new quantum computer into operation, experts said.

Some 150 kilometers east of Hefei, 10 5G-driven unmanned mining trucks rumble with full loads of iron ore in a mining field of Masteel (Group) Holding Co, one of China’s largest iron and steel complex in Ma’anshan, Anhui.

“Equipped with technologies such as laser radar, a satellite navigation system and 5G network, the truck can avoid obstacles and be operated remotely, improve mining safety and production efficiency,” said Yang Zhenyu, an on-site engineer with the Qingdao Huituo Intelligent Machine Co that develops the trucks.

Since China kicked off the commercialization of 5G services in 2019, 5G technology has been embedded in intelligently connected factories, ports, driverless cars and various aspects of people’s lives, with some 700,000 5G base stations in operation.

China will further build more than 600,000 5G base stations in 2021 while accelerating the 5G coverage in major cities and advance co-construction and sharing, Xiao Yaqing, minister of industry and information technology, told a work conference last December.

“The development of future industries offers a great opportunity for China to keep pace with the rapid global innovation,” said Pan Jiaofeng, president of the Institutes of Science and Development under the Chinese Academy of Sciences, adding that the emerging middle class and ground-breaking technologies will bring new opportunities for China’s future industries.

In the next 15 years, China will implement a number of forward-looking and strategic major national science and technology projects in the frontline fields of artificial intelligence, quantum information, integrated circuits, life and health, brain science, breeding, aerospace science and technology, and deep Earth and ocean exploration.

Provincial-level regions are taking advantage of their specific resources to cultivate future industries.