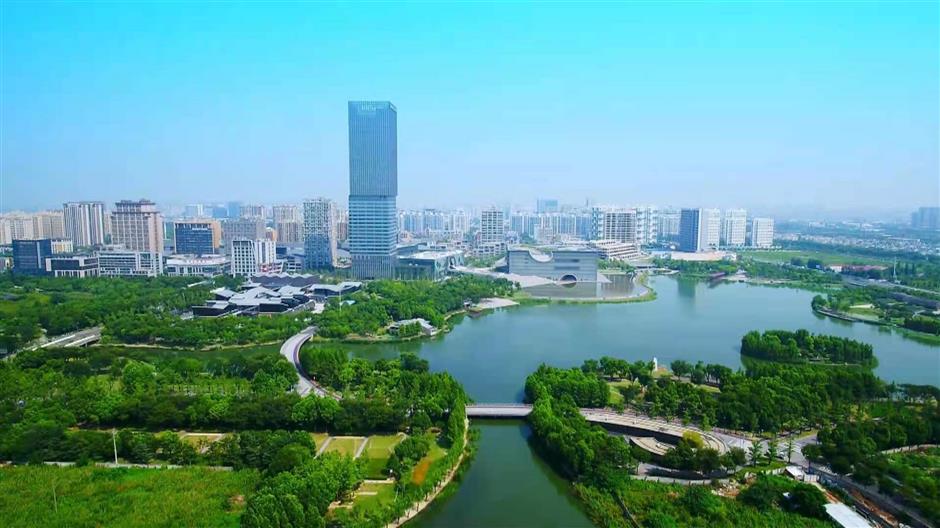 The Yuanxiang Lake Central Activity Zone, one of the five key zones of the Jiading New City.

Jiading New City, one of Shanghai's five new cities, is accelerating its development. This year, it aims to sign around 106 projects with planned investment of 140 billion yuan (US$21.64 billion).

Recently, eight foreign and domestic companies signed contracts with the Jiading government to invest 6.22 billion yuan, of which 4.82 billion yuan will come from abroad, during an investment promotion event held by the Shanghai Commission of Commerce and Shanghai Foreign Investment Development Board.

Five of the eight projects are related to new energy and the automotive industry, Jiading's strongest sectors.

"Business indicators show Shanghai's economy has resumed its pre-pandemic growth. Foreign investment in particular was strong in the first four months of this year, up 20.3 percent year on year and 25.2 percent higher than the same period in 2019," said Zhu Yi, vice chairwoman of the commerce commission.

In 2020, Jiading's three pillar emerging industries – auto manufacturing, intelligent sensors and the Internet of things and high-performance medical equipment and precision medicine sector – were valued at more than 100 billion yuan each and their total output jumped 29.7 percent year on year to 125.49 billion yuan.

Jiading will raise its industrial strength in the coming five years. By 2025, Jiading New City will generate an annual output of 1 trillion yuan, up from its current level of less than 600 billion yuan. The annual GDP of the entire northwest Shanghai district will reach 360 billion yuan, said Lu Fangzhou, Party secretary of the district.

Next-generation auto technologies, mainly connectivity, self-driving, car sharing and electrification, coupled with intelligent sensors and the Internet of Things, will be built into a 100-billion-yuan level industry, while the online new economy will generate overall output of around 400 billion yuan a year.

Two 100-billion-yuan-level science and technology parks have been planned by the local government, one in partnership with scientific research institutes and the other with universities and colleges, as Jiading continues to extend its innovation efforts to drive its economy. By 2025, the number of new and high-tech enterprises in the new city will exceed 1,400, according to its plan.

To promote industry-city integration, the district government is focusing on making the district more livable by enhancing its transportation and public services.

A comprehensive transportation network is planned to cut travel times within the new city to a maximum of 30 minutes, and a trip to downtown Shanghai to within 45 minutes.

A batch of high-grade educational and medical facilities will be built and put in use by 2025, and a number of cultural and sports events with national and global influence, such as the Formula One Chinese Grand Prix and F1 eSports China championship, will either remain in or be introduced to Jiading.

Construction of Jiading New City began in 2005, and after 15 years the urban framework has been formed. It has 486,000 permanent residents and is planning on doubling its population by 2035.