Strolling along the east bank of the Huangpu River, every kilometer you can find an elegant wooden hut with floor-to-ceiling windows as well as tables and chairs for walkers to take some repose.

Here you can read a book, watch a video and enjoy sunrises and sunsets over the river.

While walking around the corner in the Lujiazui Financial City, you will come across a solid white three-story small building, with a large terrace and open steps, where you can listen to a lecture, meet a few book friends, and enjoy your spare time.

Known as the River Viewing Service Stations and Rong book houses, they both are part of Pudong's public cultural spaces.

Determined to enhance its soft power, Shanghai's Pudong New Area is stepping up efforts in constructing a high-quality cultural urban area in the new age.

In recent years, Pudong has accelerated the planning, construction and use of a number of high-level public cultural spaces. The Shanghai Astronomy Museum, the Museum of Art Pudong and the Songcheng Performance Park, the city's newest cultural tourism landmarks, have all been inaugurated and are open to the public.

Construction of the east branch of the Shanghai Library and Pudong Football Stadium are expected to be completed in August. Other key cultural landmarks, such as the Shanghai Grand Opera House, Zhoupu Sports Center, Chuansha Stadium and the Shanghai Juss International Equestrian Center, are also speeding up.

The new Museum of Art Pudong (MAP), opened on July 8, has greeted around 3,500 visitors per day on average over the past month, with reservations having to be made one day ahead out of concern for the prevention and control of pandemic.

Designed by Ateliers Jean Nouvel, the 13,000-square-meter museum in the heart of the Lujiazui area is set to become a new landmark in Shanghai's cultural scene as well as a platform for international exchange, according to Xu Erjin, general manager of Lujiazui Group, who is in charge of the museum.

It will continue to seek deeper cooperation with the Tate Britain, with the latter offering three-year training and consultancy services and bringing exhibitions to Shanghai, according to Xu.

MAP is also talking to some other world's top museums to seek cooperation, Xu said. The museum is expected to put on display more artworks from outstanding art galleries, museums and artists, such as collections from the Musée d'Orsay in France and the Metropolitan Museum of Art in the US.

As a public art institution, the MAP shoulders the cultural mission and social responsibility of promoting art and accommodating audiences of different ages, backgrounds and levels, aspiring to become the first art museum "centering on the audience" in Shanghai and even the whole country, Xu said.

"We hope that the future MAP will become a museum where everyone can enjoy the world's art treasures without going out of Shanghai, giving full play to the cultural role of art museums in urban development," he said. 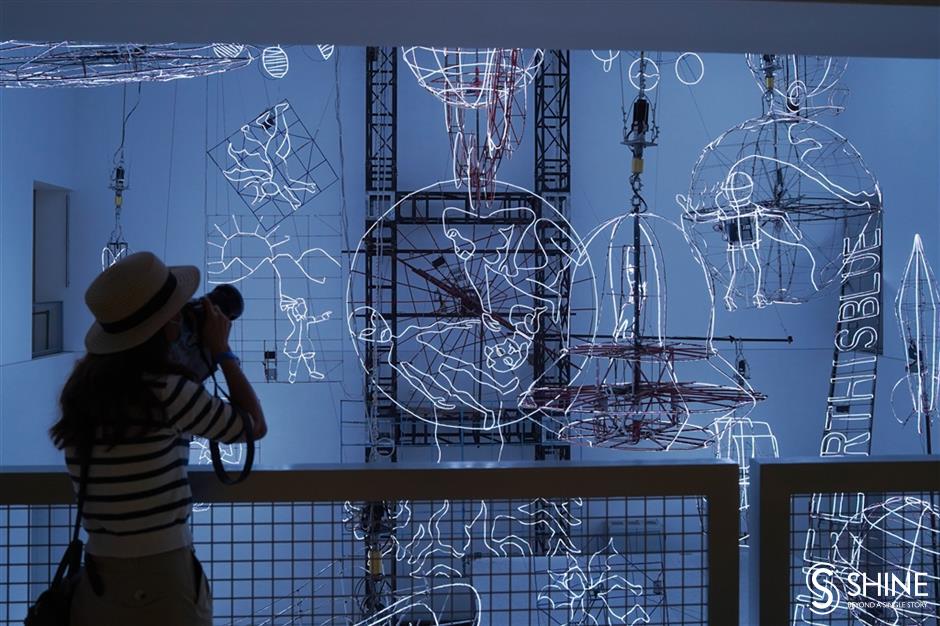 A woman takes a photo in the Museum of Art Pudong, which was opened in July and has greeted around 3,500 visitors per day on average over the past month.

Aside from the exhibitions and activities promoting public art, Pudong is also working to optimize the environment for the art industry with better services in aspects such as warehouse, logistics, demonstration and auction.

With an investment of over 1 billion yuan in its construction, the Shanghai International Artworks Bonded Service Center was put into use in Waigaoqiao Free Trade Zone in the Pudong New Area last year, to meet the growing demand for international artwork trading.

Covering a total area of 68,300 square meters, the exquisitely-designed building is the largest comprehensive art bonded warehouse in the world. It has six major operating areas including warehousing and logistics, exhibitions, auctions and purchasing, evaluations and appraisal, copyright services and financial services.

It has the world's largest area, the highest level of fire protection, and the most stringent security standards of its kind, according to Hu Huanzhong, chairman of the Shanghai Free Trade Zone International Culture Investment and Development Co Ltd, who is in charge of the center.

"What's more important is not just the material conditions, but the functions of the Free Trade Zone, especially the bonded area, in opening up to the outside world and allocating global resources," Hu said.

"Many measures and policies on opening up to the outside world and trade facilitation have been implemented and expanded on this platform, and then replicated in other free trade zones across the country."

Applicable during the China International Import Expo period, each participating exhibitor who sells artworks or antiques can enjoy tax incentives for up to five pieces with exemption of tariffs, import value-added tax as well as consumption tax.

Normally, overseas institutions cannot sell antiques to Chinese individual buyers in China but only display them.

The platform in the FTZ already allows overseas art pieces to be stored in bonded areas before they get through custom clearance, a move intended to safeguard "the value, privacy and security" unique to these delicate exhibits, Hu noted.

The bonded area of the Shanghai FTZ has become the fastest and most efficient channel for the import and export of art pieces, according to Hu. At present, more than 4,400 pieces/sets of imported artworks, including cultural relics, are operated through the zone, accounting for nearly 60 percent of the city's total.

Among them, the number of cultural relics has surged from 61 pieces in 2016 to 1,930 pieces/sets in 2020, accounting for 40 percent of the city's overall figure, ranking first in all the free trade zones in China.

As of the end of June, 2021, the cumulative value of artwork imports and exports had exceeded 55 billion yuan (US$8.48 billion).

In the first half of the year alone, the import and export value of artworks handled through the platform achieved 6 billion yuan, Hu said, creating a new half-year record, which "is a great achievement of the Shanghai free trade zone and the achievement of Pudong's reform and opening-up."