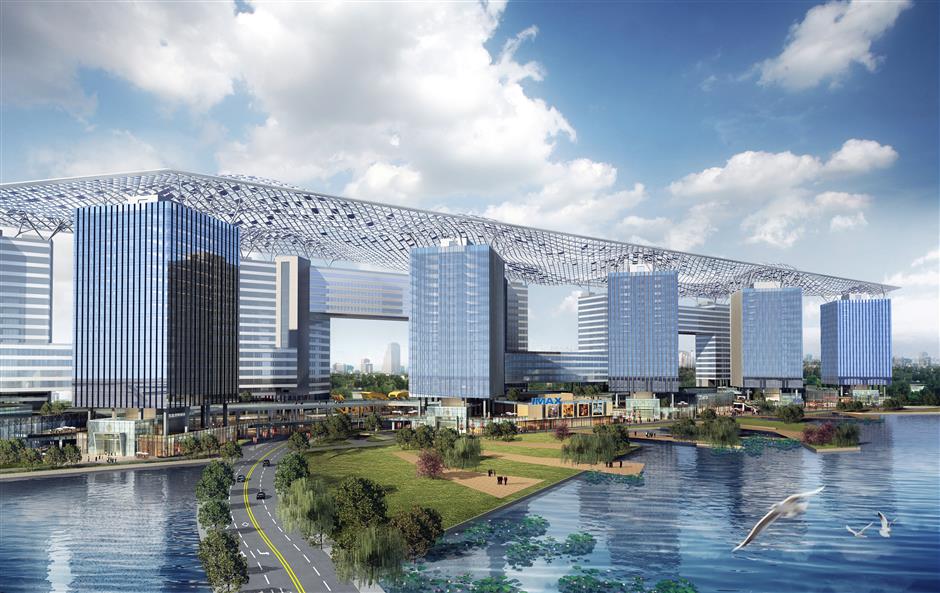 Suburban Songjiang District has been stepping up efforts to introduce more major industrial projects and leading enterprises to the district, as attracting investment is a top priority to help develop the new city, according to the Songjiang District Economic Committee.

The total number of foreign-invested companies in Songjiang stands at 6,180 from 128 countries and territories, among which more than 50 are Fortune 500 multinationals.

In addition to strengthening economic development, the district is trying to balance its social development and improve facilities to make life for people who live and work there more convenient.

Construction of Metro Line 12's western extension to the district will start within the year, and the western extension of Line 23 is also on the agenda to better connect Songjiang with downtown districts and Shanghai's four other new cities, according to Cheng Xiangmin, Songjiang's Party secretary.

The goal is to enable people to travel via public transportation from Songjiang to downtown Shanghai and other new cities within 45 minutes, according to the district government.

At least one sports center will be built in the new city in the next five years, and the district will be developed into a park city, with per-capita green space reaching 13.2 square meters and forest coverage 19.5 percent by 2025.

The Shanghai government is working to attract foreign investment for all five "new cities" in the city's suburbs – Songjiang, Jiading, Fengxian, Qingpu and Nanhui – by holding a series of diverse investment promotional events.

The first event was held in Sheshan, a scenic spot in southwest Songjiang, during which the district initiated the G60 Science and Technology Innovation Valley, an alliance of nine major cities in the Yangtze River Delta region including Jiaxing, Hangzhou, Jinhua, Suzhou, Huzhou, Xuancheng, Wuhu and Hefei.

The Shanghai Commission of Commerce and Shanghai Foreign Investment Development Board co-organized the event, which attracted more than 100 people from the government, the consulates general in Shanghai of a number of countries including the US, Canada, Japan, Singapore and South Korea, key foreign-invested enterprises and professional service institutions.

"The commission will focus on further promoting the investment environment in the new cities through diverse activities," said Li Hong, deputy director-general of the Shanghai Commission of Commerce.

In 2020, Songjiang's industrial output reached 447.7 billion yuan, the total value of imports and exports stood at 305.57 billion yuan and fixed-asset investment was 60.5 billion yuan, behind only the Pudong New Area in these three main economic indicators, according to Chen Rong, director of the Songjiang Commission of Commerce.