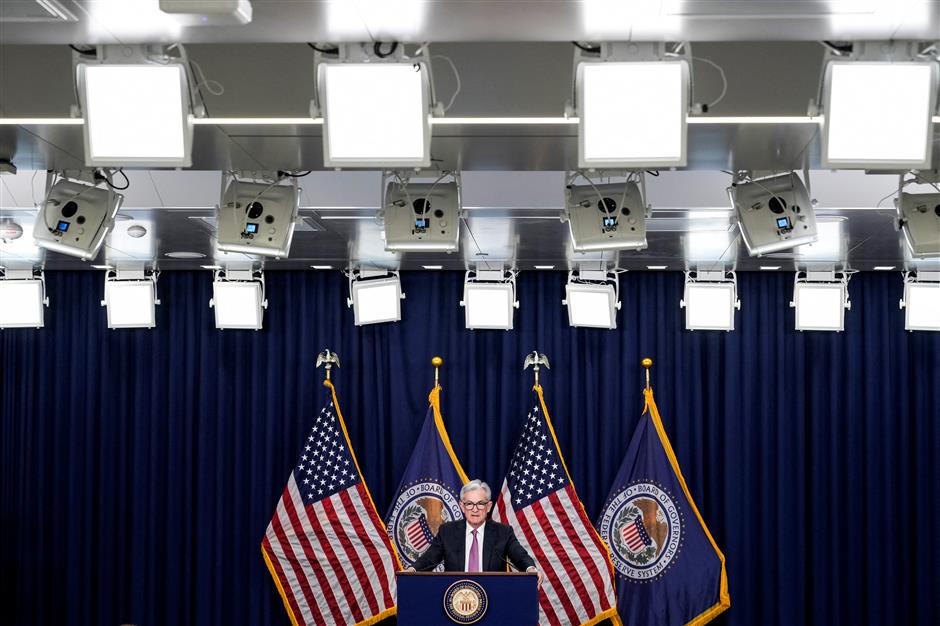 The US Federal Reserve on Wednesday raised its benchmark interest rate by 75 basis points, the second in a row of that magnitude, as elevated inflation showed no clear sign of easing.

"Inflation remains elevated, reflecting supply and demand imbalances related to the pandemic, higher food and energy prices, and broader price pressures," the Fed said in a statement after a two-day policy meeting, adding that the central bank is "highly attentive to inflation risks."

"The war (in Ukraine) and related events are creating additional upward pressure on inflation and are weighing on global economic activity," the Fed said.

The Federal Open Market Committee (FOMC), the Fed's policy-making body, decided to raise the target range for the federal funds rate to 2.25 to 2.5 percent and "anticipates that ongoing increases in the target range will be appropriate."

The statement showed that all 12 committee members voted for the decision.

The committee noted that it will also continue reducing its holdings of Treasury securities and agency debt and agency mortgage-backed securities.

Headline consumer price index (CPI) has remained over 8 percent since March this year, a stark reminder that the Fed has a long way to go to bring elevated inflation under control. CPI in June surged 9.1 percent from a year ago, hitting a fresh four-decade high.

"While another unusually large increase could be appropriate at our next meeting, that is a decision that will depend on the data we get between now and then," Fed Chair Jerome Powell said Wednesday afternoon at a press conference.

The Fed chief noted that the current range of 2.25 to 2.5 percent is what the FOMC considers as neutral level – meaning Fed's monetary policy is neither accommodative nor restrictive.

"I think the committee broadly feels, we need to get policy to a moderately restrictive level," Powell said, citing the latest quarterly economic projections released in June, which showed that the median FOMC projection for the federal funds rate at the end of this year is 3.4 percent.

The Fed chair dismissed the view that US economy is already in a recession, citing labor market strength.

"We're not trying to have a recession and we don't think we have to," he said, while acknowledging that the path to avoid recession has narrowed and may narrow further.

The US economy is estimated to have shrunk at an annual rate of 1.2 percent in the second quarter, according to the Federal Reserve Bank of Atlanta's GDPNow model updated Wednesday.

With a first-quarter decline of 1.6 percent, a second consecutive quarter of negative growth would meet the technical definition of a recession.

Powell told reporters that the Fed sees "two-sided risks" as it continues its fight against four-decade high inflation.

"Doing too much and imposing more of a downturn on the economy than was necessary, but the risk of doing too little and leaving the economy with this entrenched inflation, it only raises the cost (of dealing with it later)," he said.

"We're trying not to make a mistake," he said.