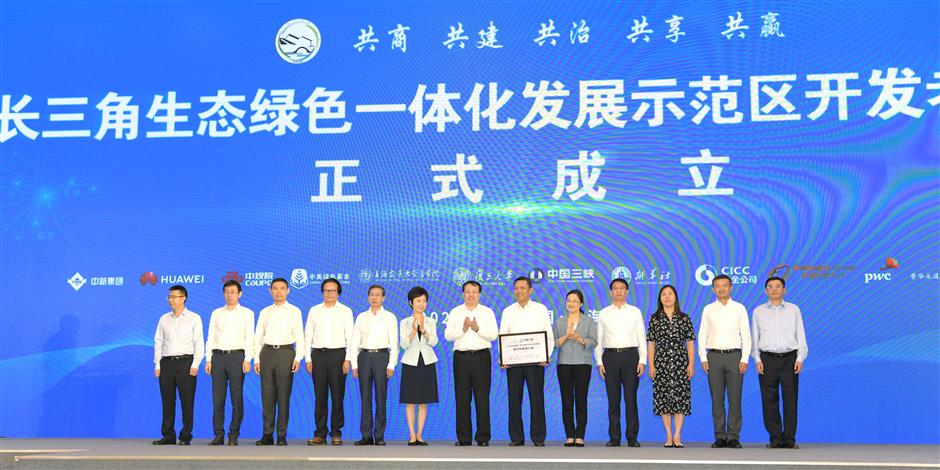 An alliance of market entities and professional organizations interested in the construction of a demonstration zone for green ecological integrated development in the Yangtze River Delta was formed at a meeting in Shanghai on Wednesday.

Shanghai Party Secretary Li Qiang said construction of the demonstration area would be the first step to promote integrated development of the area, actively exploring ways to boost institutional innovation, and strengthening reforms and system integration.

"We will unblock the regional economic circulation, and strive to make greater efforts in the new development pattern which takes the domestic market as the mainstay and allows the domestic and foreign markets to boost each other, to explore a replicable system model for the regional coordinated development throughout the country," Li said.

He stressed accelerating development of the demonstration zone into an area with a new benchmark for green ecology, a new high ground for innovative development, and an experimental field for institutional innovation.

Also during the meeting, a batch of major projects was signed to be launched in the demonstration area, including the scientific planning and high-standard design for high-quality development of the area, integrated construction of the health-care system, strategic cooperation of green insurance, and research into the index system for integrated development of the area.

Wang Kai, dean of the Chinese Academy of Urban Planning and Design, said the demonstration area for integrated development of the river delta and the Xiongan New Area were of different strategic significance and took different development paths, but they had the same development idea as they both emphasized green ecology, innovation-driven development, cultural promotion, quality of life, and resilience and security.

"To build a 'blue Yangtze River Delta,' we should attach more importance to shore cleaning, high-quality drainage and recycling," said Qu Jiuhui, an academician of the Chinese Academy of Engineering and a professor at Tsinghua University.

Cao Zejun, vice president of Huawei Technology China, highlighted the importance of the "iron triangle of digital technology" — 5G, artificial intelligence and the cloud, and that the derived "long chain of digital economy" will bring new experiences, new applications and new industries to the demonstration zone.

On August 22, President Xi Jinping stressed efforts to seek continuous results in the integrated development of the Yangtze River Delta through focusing on major work of integration and high-quality development.

"The integration mechanism and interconnected infrastructure have played a role in epidemic prevention and control as well as economic recovery," Xi said in a speech at a symposium in Hefei, capital of Anhui Province. "In general, a new development pattern for the integration of the Yangtze River Delta is taking shape."

Noting that the region should also assume the role of a trailblazer for China's technological and industrial innovations, Xi said Shanghai and the entire delta region should not only provide quality products but also serve as a source of high-level technologies to support China's high-quality development.