Shanghai launched its Autumn Shopping and Tourism Festival on Tuesday as well as its campaign for the national "Consumption Promotion Month."

The launch marked the beginning of a series of events and themed consumer activities to be held in the city ahead of the Spring Festival, with authorities determined to boost consumption and promote economic recovery.

During “consumption month,” 77 events held by over 2,000 enterprises, including Alibaba, Pinduoduo, Meituan, Bailian Group, New World Development Co and Suning, have been included in the country's list of key events.

At Tuesday’s ceremony, the "Shanghai Shopping" mobile app was released which aims to enhance the publicity, concentration and visibility of the “Shanghai shopping” brand and accelerate the city's development as an international consumption city.

It strives to serve as a one-stop, multi-functional and international public information service platform for the city's consumer market, with which consumers can easily find information on sales and promotion activities via their phone and enjoy a more convenient shopping experience. 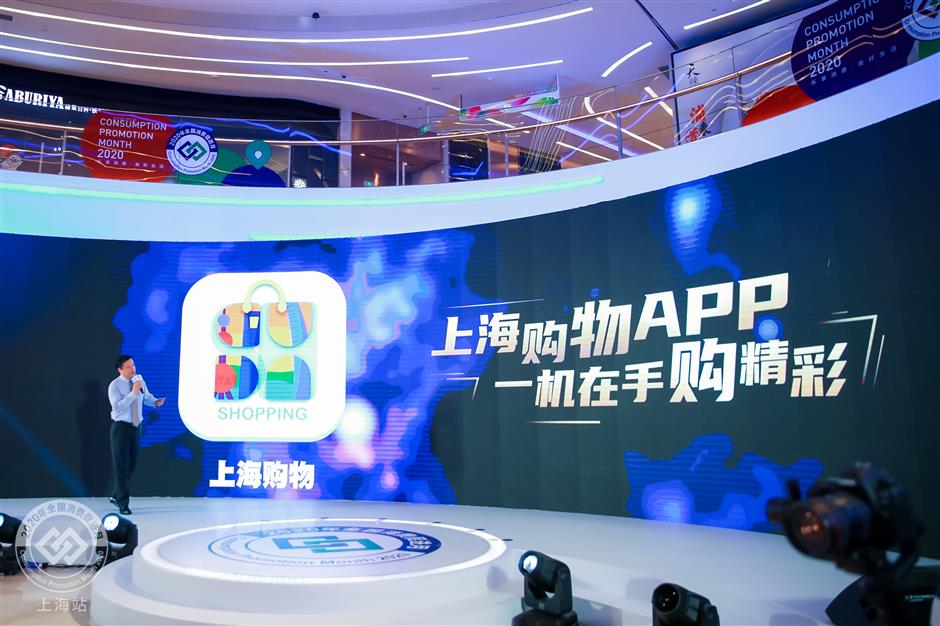 Shanghai launched a "Shanghai Shopping" mobile app, with which consumers can get information on promotional activities and enjoy shopping in the city.

Meanwhile, a consumer market big data lab was launched in the city, which aims to reflect the development and changes in the consumer market and the effectiveness of authorities' work in promoting consumption.

The lab will piece together information such as consumer payment, passenger flow in commercial districts, mobile phone signaling data and express delivery data, to establish a monitoring system with big data on both the consumer side and the supply side and conduct research, according to the city's commerce commission.

This is aimed at enhancing the influence, attractions and competitiveness of Shanghai as an international consumer city, and supporting the decision making process in promoting upgrading of the consumer market.

After the shopping festival, from mid-October to early November, with the third China International Import Expo from November 6 to 10, to turn more exhibits into commodities, Shanghai will launch a series of events on new product releases, as well as exhibitions and cultural weeks for featured goods from various countries.

From early November to mid-December, the city will focus on online shopping, offer more support and organize activities to give full play to the Double 11 and Double 12 online shopping sprees.

After that, there will be another shopping season around the New Year and before Spring Festival, with more sales promotions and discounts planned.