The 5050 Talent Plan Entrepreneurial Fund has been introduced in Hangzhou’s Binjiang District, offering incentives for talented workers and promising projects from universities and making the district a leading labor market and innovation center in the city.

Hangzhou’s Binjiang District has introduced a 5050 Talent Plan Entrepreneurial Fund which offers incentives for talented workers and promising projects from universities, making the district a leading labor market and innovation center in the city.

At the recent Fourth Hangzhou Binjiang International Talent Festival, local government unveiled the new measures and the details of the fund.

At the festival, Tongji University, Xi’an Jiaotong University and Nanjing University of Aeronautics and Astronautics have officially cooperated with Binjiang government to give an impetus to technological innovations among university talent.

The first phase of the fund raises 100 million yuan (US$15.55 million). Binjiang government’s investment agency will allocate money to universities according to the valuation of each project. A project can receive up to 2 million yuan, while a company that has other institutional investors can be granted up to 10 million yuan.

In the future, after new commercial investors joining in, the government will withdraw the investment to directly reward the start-up team with 30 percent of the profit, and the remaining part transfers to the 5050 Talent Plan Entrepreneurial Fund, investing in new projects.

“If institutional investors are unwilling to invest in startups, the government could be the first investor,” Lin said.

At the festival, local authorities also unveiled the 5151 Industrial Cooperation Plan, hoping to build an online and offline platform to integrate multiple resources and technologies.

“For pharmaceutical firms, talent is required in every facet, including market sales, quality control and clinical trials,” said Hua Shaobing, founder of Daltonbio Co. “I hope the 5151 Plan can help us recruit more prominent professionals.”

In the future, the online platform is about to help companies search for professionals, upstream suppliers, cooperation opportunities and carve out new markets. About 1,000 companies located in Binjiang will be digitalized on the artificial intelligence platform. Users can search for key words and find out potential partnership and opportunities. 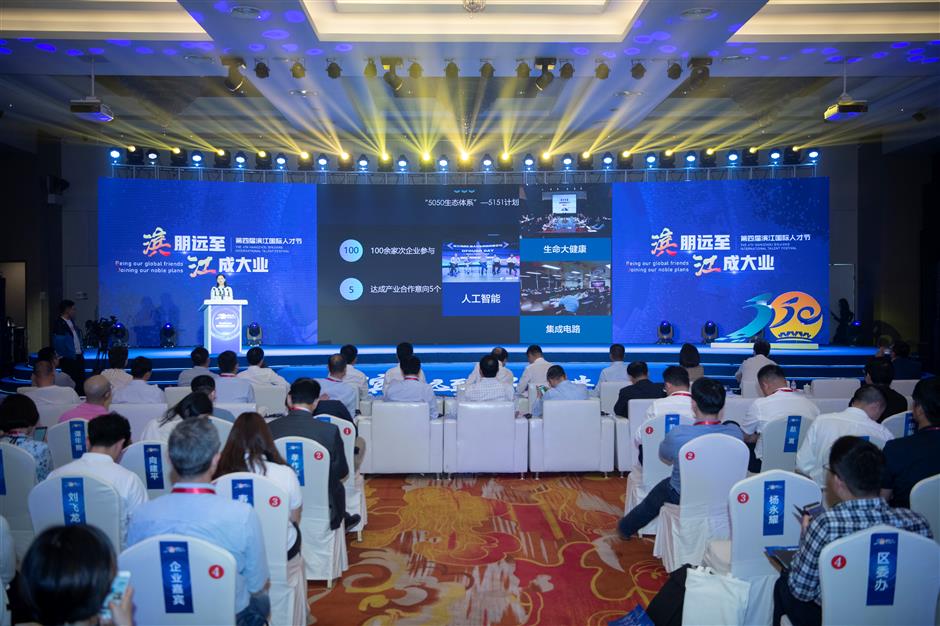 About 1,000 companies located in Binjiang will be digitalized on the AI platform, according to the 5151 Industrial Cooperation Plan which is published at the Fourth Hangzhou Binjiang International Talent Festival.

“The online platform is still under construction,” Lin said. “Now, different government departments have already coordinated with companies in efforts to help them integrate resources. As long as the online platform opens, the procedures will be streamlined, saving money and time for companies.”

Another highlight during the talent festival was the establishment of the Engineers Coordination and Innovation Center of Binjiang Xin Huo Base. It is expected to serve microchip firms at aspects of research and development, chip testing and talent cultivation.

In 2016, the Ministry of Industry and Information Technology initiated the Xin Huo plan to develop China’s microchip industry. Hangzhou was approved to build the “Xin Huo” Base in 2018.

The 5050 Talent Plan was officially launched in 2000 and is upgraded every five years. Now is the beginning of the third five-year cycle. Local authorities have announced the 3.0 version of the plan at the festival, including new measures and supportive policies.

Previously, Binjiang government supported projects for three to five-year period. In the upgraded version, the period is extended up to seven years to further support local companies.

The second new measure is to lower the threshold for academic talent. Postgraduates are qualified to apply for subsides from the 5050 plan. For years, local authorities have implemented preferential policies on rent and financial subsidies to attract talent. Formerly, these were exclusive to doctoral-degree holders.

The think tank is expected to help coordinate Binjiang’s development, especially in the digital and health-care industries. These luminaries can collaboratively recommend promising projects. If approved by Binjiang government, the 5050 Talent Plan will offer up to 15 million yuan for a project.