They emphsize the world of luxury should not be about waste – it should be eco-friendly.

Wandering the booths of these iconic brands at the Hall 5.2 for consumer goods, visitors can learn the environmentally friendly details behind these resplendent exhibits.

It is Richemont's second CIIE. Nine of its brands, such as Cartier, dunhill and Van Cleef & Arpels have been here before. This year, they are joined by Parisian couture name Maison Alaïa.

Cartier displays its new Tank Must watch soon to be in the China market, which boasts an environmentally friendly non-leather strap made partly from apple skin waste.

Compared with a traditional leather strap, production of the non-leather version saves up to 10 liters of water, with energy savings capable of powering 200 smartphone charges, and the process reduces carbon emissions by up to six-fold.

The Tank Must, equipped with a new photovoltaic movement, can be automatically charged by both sunlight and artificial light – running for up to 16 years without replacing the battery.

Last month Cartier, delegated by Richemont and Kering, launched in partnership with the Responsible Jewelry Council the Watch and Jewelry Initiative 2030.

It is driven by a common conviction that the UN Sustainable Development Goals and aspirations for a sustainable industry can only be achieved through collaborative initiatives.

The initiative welcomes all watch and jewelry brands with a national and international footprint willing to commit to a set of ambitious and common objectives in three areas: building climate resilience, preserving resources and fostering inclusiveness.

Richemont makes its second appearance at the CIIE this year with nine brands being here before, such as Cartier, dunhill and Van Cleef & Arpels, and a new friend, Parisian couture Maison Alaïa.

LVMH designed its more than 600-square-meter exhibition zone around the theme of alliance of nature and creativity, which well illustrates its LIFE 360 environmental strategy (LVMH Initiative For the Environment) that presents a bold new vision of luxury.

The first stage of this initiative is an in-depth review and precise measurement of the impact of the group's activities on biodiversity, water and the climate. Its targets include creating products in harmony with nature that respect and preserve biodiversity and the climate.

The products showcased by Louis Vuitton are testimony to its commitments toward preserving biodiversity.

The Charlie sneakers are composed of more than 90 percent recycled and bio-based raw materials. The LV Trainers are conceived through an upcycling process of the original sneakers launched in 2018 and the Felt line is designed by using eco-responsible materials such as organic cotton, recycled wool-based jacquard, recycled polyester derived from existing stocks, as well as recycled plastic for the chains. 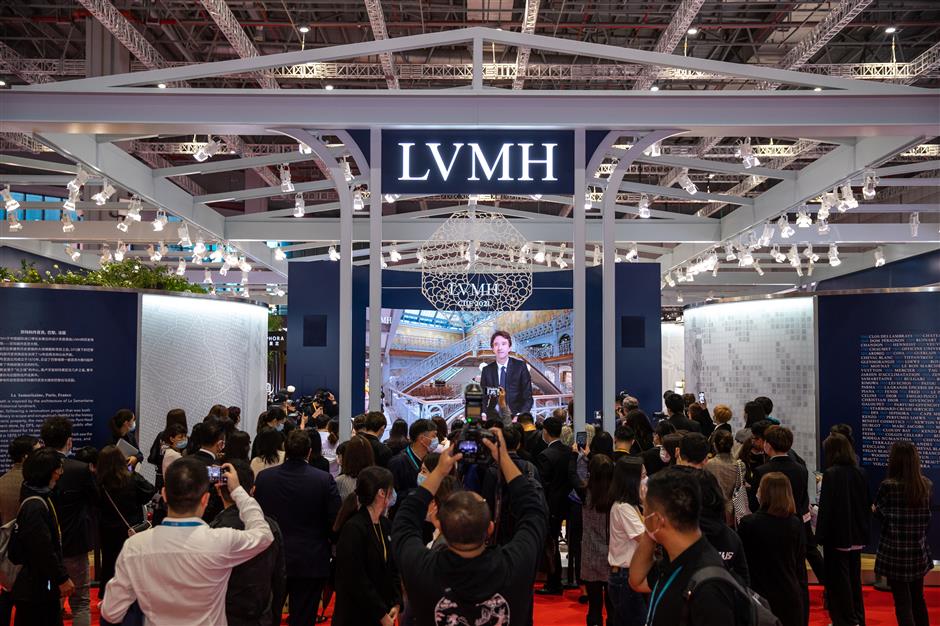 LVMH designs its more than 600-square-meter exhibition zone around the theme of alliance of nature and creativity. 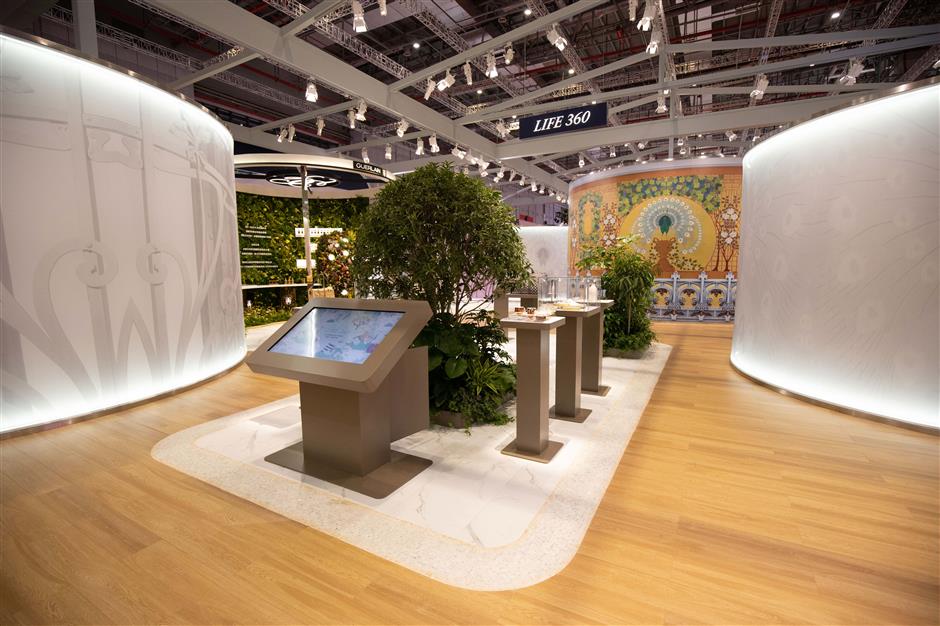 The first stage of this initiative is an in-depth review and precise measurement of the impact of the group's activities on biodiversity, water and the climate.

Kering and all its houses have engaged in the CIIE for three years. With a determination on depicting a grand universe of its own, the Kering Pavilion is named the Kering Galaxy.

Like the solar system, the Kering Galaxy is made up of a central pillar that is the group which each of its houses, like planets, live their history, their innovations and their own journey, both independent and interconnected by common ambitions of quality, inventiveness and know-how.

Gucci highlights its historical heritage through its classic bamboo bag. In the midst of a shortage of raw materials such as leather, the founder of the house came up with the idea of making the handle out of bamboo. From its beginnings, this bag has existed with immense success and accompanied many personalities, such as Ingrid Bergman and Vanessa Redgrave. 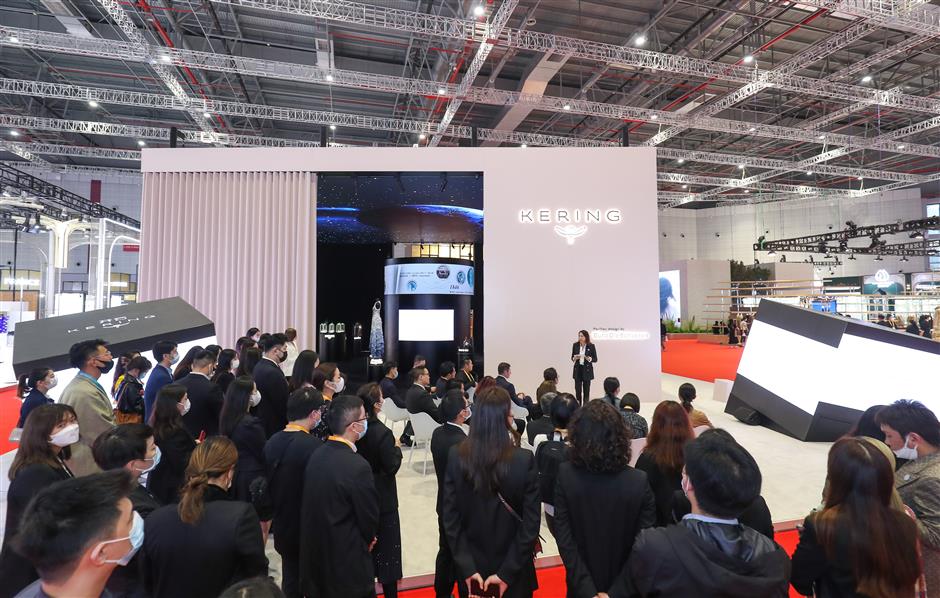 It's the third year for Kering and all its houses to engage in the CIIE. 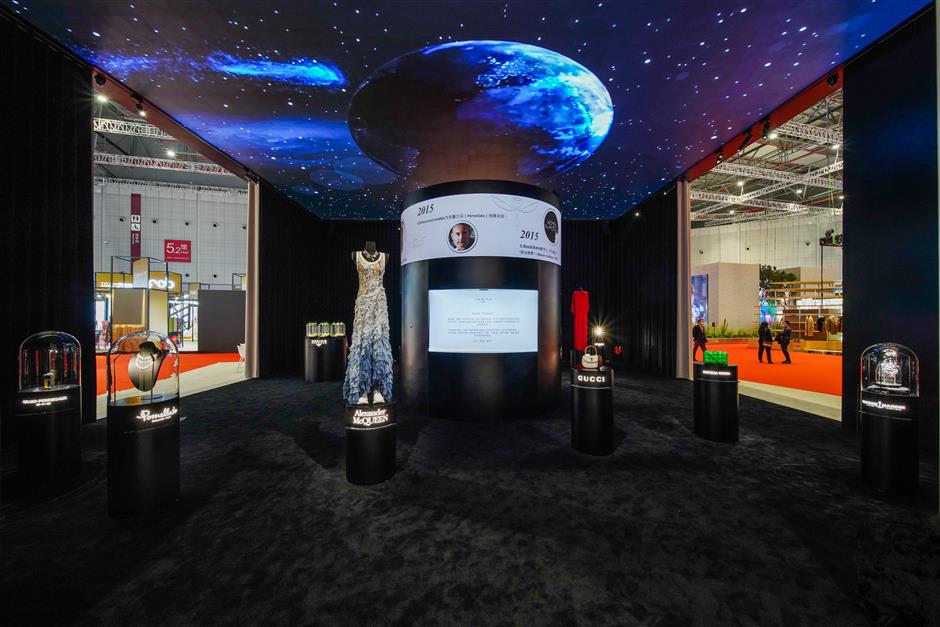 With a determination on depicting a grand universe of its own, the Kering Pavilion is named the Kering Galaxy.