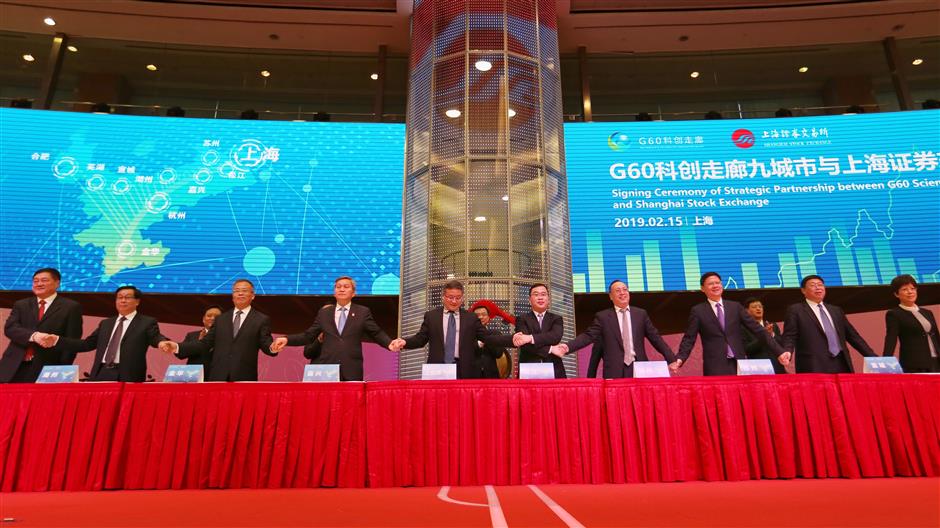 The G60 High-Tech Corridor, the Songjiang-initiated alliance of nine major cities in the Yangtze River Delta, signed a cooperation agreement with the Shanghai Stock Exchange on Friday to set up the G60 Comprehensive Index and G60 Component Index.

The component index, on the other hand, will choose 50 companies — both main board listed and those to be listed on the science and technology innovation board — in high-tech industries such as information technology, artificial intelligence and bio-pharmaceuticals.

So far, according to the list of sample stocks, the return on equity (ROE) of the companies is higher than the market average by 5.86 percent and 5.97 percent.

The comprehensive index has finished being compiled and is waiting for the approval of the China Securities Regulatory Commission, the information office of Songjiang District said.

The information office also said an exchange traded fund will be issued on the component index when the time is right.

Ma Chunlei, director of the Shanghai Development and Reform Commission, said the G60 indexes will provide more chances for high-tech companies in the Yangtze River Delta region in the secondary market.

“The Yangtze River Delta is the most economically vigorous region of China,” said Ma. “The promotion of high-tech industries in the G60 Corridor will be vital to the development of both the region and China as a whole.”

Lin Yi, a securities analyst from Great Wall Securities, said the ETF of the G60 Component Index will benefit both investors and companies.

“For those eager for a piece of the high-tech industries in the nine cities, they can invest in them by buying the ETF,” said Lin. “For the companies, they can also raise more funds from the ETF if it sells well.”