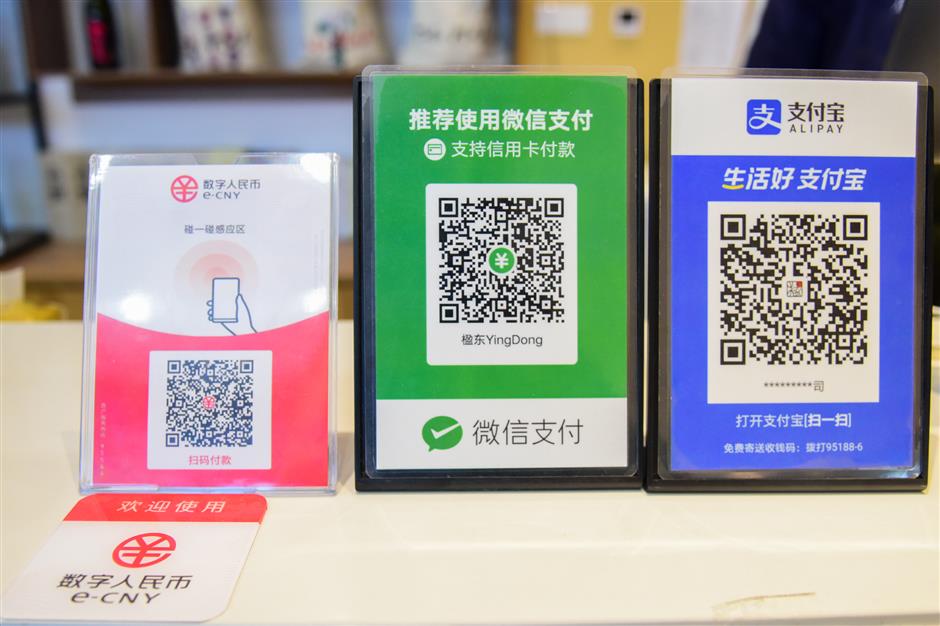 From hospitals and shopping malls to Metro stations and grocery stores, many citizens in Shanghai have used a new kind of payment method over the past few months — e-yuan, a virtual currency developed by the People’s Bank of China, the country’s central bank.

The most recent darling of the market was its digital currency payment system for its merchants, which was the first of its kind in the city.

A local resident surnamed Li bought a mobile phone last month at a store in Suning Mall. Unlike his previous shopping experiences, he paid for it with digital yuan, the first purchase he made after downloading the e-yuan app.

“I didn't expect to see that the new form of currency can be used at Suning Mall when I came here today, so I decided to give it a try," Li said. "This payment process is much more convenient than I imagined."

From internal trial runs within the participating six state-run banks for employees and invitation-only clients, the “digital yuan wallet” has been gradually expanded to the general public.

People in Shanghai can now apply at one of the six banks' branches to be "white-listed" for digital yuan tests, and their applications can be approved in as soon as three days at some banks.

The city, along with five other regions, was added to the list for China’s pilot program for the sovereign digital yuan last October, said Li Bin, head of the People’s Bank of China macroprudential policy bureau.

The first e-yuan test began in late 2019 in Shenzhen, Suzhou, Xiong’an and Chengdu.

“The scope of the pilot program is expanding in an orderly fashion, while its usage scenarios are gradually increasing,” Li said, adding that the operation of the system “is stable.”

At Shanghai Tongren Hospital, patients can now make e-yuan payments in the outpatient and emergency departments.

In January, the virtual yuan was tested at a canteen in the hospital, its first trial run in a smart-card format.

A tea shop in Lujiazui also piloted the use of digital yuan in early January.

Even farmers in suburban Qingpu District have used e-yuan to purchase chemical fertilizer and grain.

In addition to agriculture-related uses, Qingpu is exploring the use of digital yuan for the entire region. People will be able to use it during events like the Double Five Shopping Festival and China International Import Expo, an official from the district said.

He added that during the city’s second Double Five Shopping Festival in May, customers will receive extra discounts when paying with the digital yuan wallet.

China Construction Bank is offering discounts and cash bonus on public travel payments to local pilot program participants until the end of June.

What's more, around half the merchants at the Shanghai Village outlet, situated next to Shanghai Disneyland, have launched e-yuan payment services.