Shanghai's Grade A office market is off to a good start in 2021 amid continuously improving leasing demand, particularly in decentralized locations, major international property consultancies said in their latest research.

Net absorption, a barometer of market demand for office space, reached 288,000 square meters in the first three months of this year, the highest quarterly level since 2019, according to JLL's newly released quarterly report.

"We've continued to see office leasing sentiment recover in both the central business district (CBD) and decentralized markets, with most take-up driven by the latter," said Joseph Wang, head of tenant representation services for Pudong markets, JLL Shanghai. "Cost-saving and consolidations accounted for a large share of leasing, with companies seizing the opportunity presented by lower office rents to upgrade or expand to high-quality new locations."

Domestic companies seem to be more active than their international counterparts, as the negative impact from the coronavirus pandemic continues to wane and business activities steadily recover. Inquiries from domestic financial services firms, in particular mutual fund and securities companies, increased compared with late 2020.

On the rental side, CBD rents fell 0.6 percent quarter on quarter, extending their downward trajectory amid continuing competition from the decentralized market but narrowing from the 1.3-percent decline in the fourth quarter of last year. Decentralized rents edged up 0.6 percent from the previous three-month period, reversing a 0.9 percent dip registered in the last quarter of 2020.

Vacancies, meanwhile, fell in both CBD and decentralized markets, standing at 11.9 percent and 28.8 percent respectively, down 0.1 and 0.7 percent from the previous quarter, according to JLL research.

"Performance of the city's Grade A office market in the first quarter exceeded our expectations, and we expect this strong sentiment to extend through 2021," said Kevin Yuan, director of research, Colliers International, East China. "Professional services, TMT (technology, media and telecom) and finance firms were the top three demand drivers, accounting for 32, 24 and 22 percent respectively of total net absorption."

Decentralized areas were a noticeable bright spot, as they garnered the most robust demand for office leasing during the January-March period — with the Qiantan, North Bund, EXPO Yaohua and Xuhui Riverside areas particularly active. Net take-up in the above four submarkets totaled 96,000 square meters in the first quarter, accounting for more than 40 percent of the city's total, according to Colliers International data. 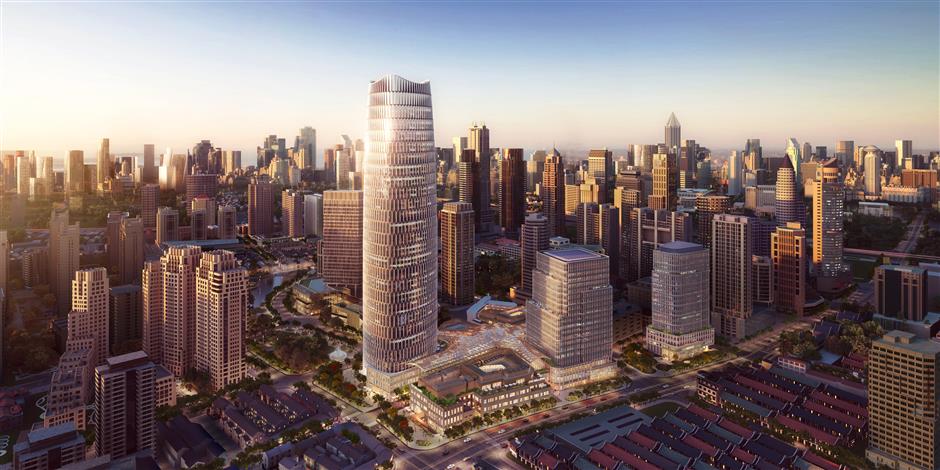 An artistic rendition of the CPIC Xintiandi Commercial Center, a 390,000-square-meter office and retail complex in downtown Huangpu District. Three office buildings totaling 200,000 square meters, including a 250-meter landmark tower, are scheduled to be rolled out starting next year.

Looking forward, vacancies in Shanghai's Grade A office buildings will be an issue due to abundant supply, while overall rentals could return to positive growth as early as 2023, Colliers International predicted.

In the next five years, the city will see an average of 1.3 million square meters of Grade A office space added to the market every year, with more than 2 million square meters in both 2022 and 2023. Of that new space, 70 percent will be in decentralized locations and the rest in CBDs, according to Colliers International data.