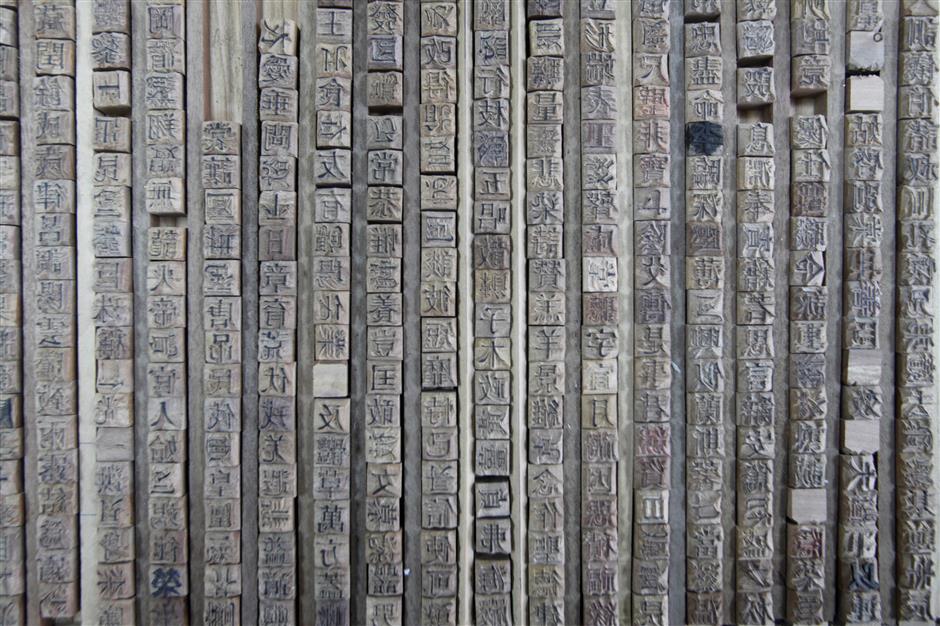 In 2009, the traditional Chinese engraved block printing technique was inscribed on the Representative List of the Intangible Cultural Heritage of Humanity by UNESCO.

Printing has long been hailed as one of the Four Great Inventions of ancient China, the other three being compass, gunpowder and papermaking. And the most notable parts of this invention are the woodblock printing and movable type printing.

As early as more than 2,200 years ago, Chinese people began to use seals, stamps and carved stones for printing. Ge Hong (AD 284-364), a renowned alchemist of the Eastern Jin Dynasty (AD 317-420), mentioned in his writings of a 13.5x13.5 cm wooden stamp with 120 Chinese characters used by Taoist monks of his time. This could be the predecessor of the woodblock printing in the country.

Despite the fact that woodblock printing of patterns on materials like silk appeared much earlier, the woodblock printing of text on paper was not used until the early Tang Dynasty (AD 618-907). By the 9th century, this technique became more mature and the first dated book printed with this method now still in existence is the Diamond Sutra, which was printed in AD 868 and discovered in 1907 in a walled-up cave at Dunhuang near the ancient Silk Road in northwest China. Now housed in the Museum of London, the 488cm-long scroll was created by pasting together seven pieces of paper printed with Buddha images and scripts.

For each page to be printed, a wood block, about 2 centimeters thick and cut out of fine-grained wood of pear or jujube trees, would be carved into a relief matrix. The unprinted part of the wood would be chipped away and the printed text and illustration would be carved into low relief of a mirror-image of the final result of printing on paper or other materials.

So, to print a thick book, it would take the artisans months or even years to carve numerous wood blocks. And, if the artisan made a single mistake in carving, he would have to throw away the wood block and started from scratch again. It was an unproductive way to make a printing, particularly when printing many different materials.

Then, the country brought forth a great inventor, Bi Sheng (970-1051), who created the world’s first movable type printing technology.

At first, Bi was an obscure commoner and artisan living in the Northern Song Dynasty (960-1127). Bi loved carving when he was a boy. Whenever he could find time, the boy would go to visit wood or stone carving shops to watch artisans there working. So when he was 15, his father sent him to a printing shop in Hangzhou to be an apprentice.

In the shop, Bi began to learn the skill of carving the woodcut, which was used then to prepare a wood block for printing text, pattern or illustration. Soon, the young Bi found the method rather laborious and ineffective.

But how to make printing easier and more efficient? He tried many ways, but all failed.

One day, Bi took his wife and their two young children to visit his home village. Bi sat under a tree watching his two children playing house. The two kids modeled clay into tables, chairs, cookers, pigs and other figurines and placed them into various combination to imitate different situations.

Suddenly, an idea flashed across Bi’s mind. He asked himself: “Why don’t I carve each character onto a piece of clay block and make as many such blocks as I need, so I can combine those pieces into any text that I want to print?” In addition, he thought, after one printing, those clay types can be used again for printing other books.

After returning to the printing shop, Bi immediately began his experiment. He first made many small clay blocks and then carved the mirror-image of Chinese characters on each block. He carved several clay types for one character and more for some common characters in case they would be repeated in the same page.

After finishing carving, he baked the clay types in the fire to make them hard. Then, he prepared an iron plate and covered it with a layer of a mixture of pine resin, wax and paper ash. To do the typesetting, he used an iron frame the size of the printed area on a page and placed the hardened clay types into the frame according to the original text.

When one frame was filled, he warmed the iron board to make the resin-wax layer partly melted and then used a flat board to press the clay types to make an even surface.

To make the typesetting easier, Bi arranged the ceramic types of about 3,000 most-used Chinese characters into dozens of wood plates according to their rhymes. In the following years, the clay was replaced by wood and metal in making the types. Then, the movable type printing became widely used in the country.

Shen Kuo (1031-95), a famous polymath scientist, statesman and writer, once pointed out that Bi’s methodical innovation was something completely revolutionary for his time.

Soon, the technology was exported to neighboring countries in Asia, such as Korea and Japan. And it was not until about 400 years later that German printer and publisher Johannes Gutenberg (1398-1468) developed the first movable type system in Europe.

In 2009, the traditional Chinese engraved block printing technique was inscribed on the Representative List of the Intangible Cultural Heritage of Humanity by UNESCO.