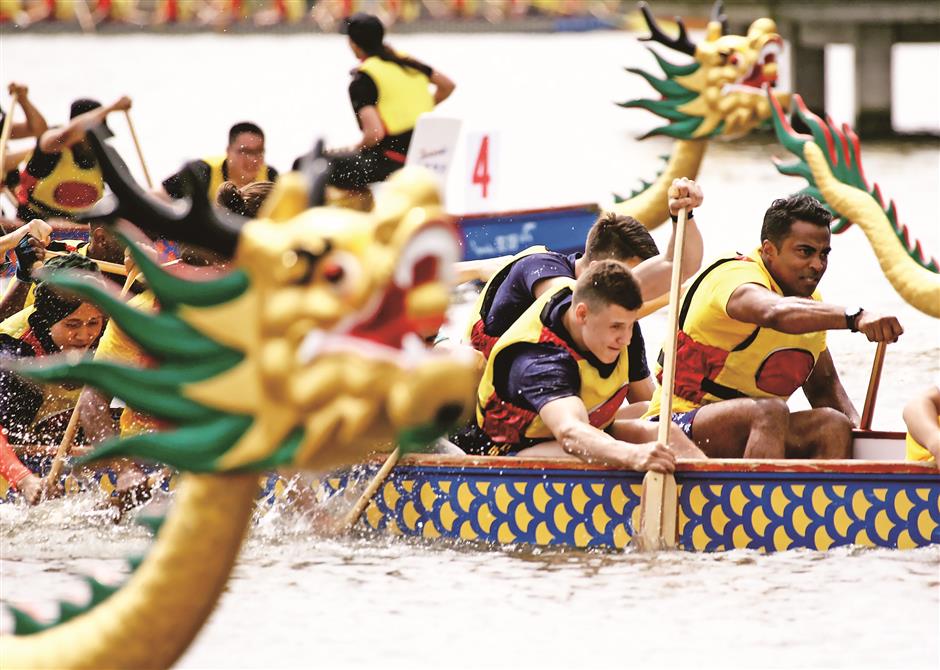 Dragon boat racing remains today the most important activity during the Dragon Boat Festival. In Shanghai, the race is held every year on Suzhou Creek in celebration of the festival.

The Dragon Boat Festival, called duanwujie or duanyangjie in Chinese, is an important date on the lunar Chinese calendar. With a history of more than 2,000 years, it falls on the fifth day of the fifth lunar month each year. There are various explanations about the origin of this festival.

Some scholars and historians claim that the festival originated from Chinese people’s worship of dragon, a mythical creature in the Chinese culture and the symbol of imperial power.

Others say the festival was first introduced to honor a young girl called Cao E (AD 130–143) for her filial piety. The story goes that after Cao E’s father drowned in a river in today’s Zhejiang Province in east China, his body was unable to be found. So, the girl searched along the river day and night. After losing the last hope of finding her father’s body, the girl jumped into the same river on the fifth day of the fifth lunar month. Five days later, the girl’s body was found on the shore of the river with her father’s body in her arms.

Also, some say the festival was created to remember Wu Zixu, an upright and wise general and politician of the State of Wu during the Spring and Autumn Period (770-475 BC). Despite his great contributions, the general failed to earn the trust of the last king of the state. His warning of an invasion plotted by the State of Yue was ignored by the king, who only listened to a minister who had be bribed by the enemy state.

Eventually, the king forced the general to commit suicide on the fifth day of the fifth lunar month in 484 BC and ordered his body be thrown into a river near Suzhou, now a city about 100 kilometers to the west of Shanghai. Ever since then, local people have carried on the tradition of holding various kinds of activities on that day in memory of the hero.

However, most people believe that the Dragon Boat Festival derived from commemoration of Qu Yuan (c. 340-278 BC), a great patriotic poet who has been widely regarded as the father of Chinese poetry and a symbol of patriotism. Qu was born into a noble family in the State of Chu during the Warring States Period (475-221 BC). He championed political loyalty and advocated alliance between the State of Chu and other states to fight against the hegemonic State of Qin.

He was once appointed a court minister. However, the king was then surrounded by corrupt and venal counselors who were jealous of Qu’s rise. They slandered Qu and intrigued against him, calling him a traitor. Gradually, Qu fell out of favor and eventually was banished. Although he was occasionally recalled to serve short stints in the court, each time he was again rebuffed and disgraced.

After his final banishment, Qu returned to his hometown in what is today’s western Hubei Province in central China. In exile, he traveled around the countryside and wrote many verses to express his profound love of his home state and his deep concerns about its future. Meanwhile, Qu created a new style of verse called “Sao” and he wrote lines of varying lengths instead of the classic four-character verses. For instance, “Li Sao” (“The Lament”), one of Qu’s most remarkable works, contains 372 lines and around 2,400 characters.

The long lyrical poem reflects the poet’s disillusionment and agony. The poem expresses Qu’s unrequited love for his country and his sadness for its inevitable decline.

Many lines from this poem are still quite popular in Chinese writings and speeches today. They include:

“The road ahead extends endlessly, yet I’ll go up and down in search of the truth relentlessly.”

“The sun and moon turn around hastily without a pause, so spring and autumn alternate as always; while imagining the falling leaves and withering grass, I’m afraid the charm of a beauty will also someday elapse.”

“My heart tells me it’s dear and right, so I won’t regret to cherish it even if for nine times I have to die.”

In 278 BC, when Qu learned that the capital of his home state was captured by the invading Qin forces, he threw himself into the Miluo River, holding a big rock in his arms.

When villagers learned the news, they rushed to the site in small boats in an unsuccessful attempt to save the poet. They threw bamboo tubes filled with rice into the river to distract fish and other creatures from the body of the poet. It was the fifth day of the fifth month of that lunar year. 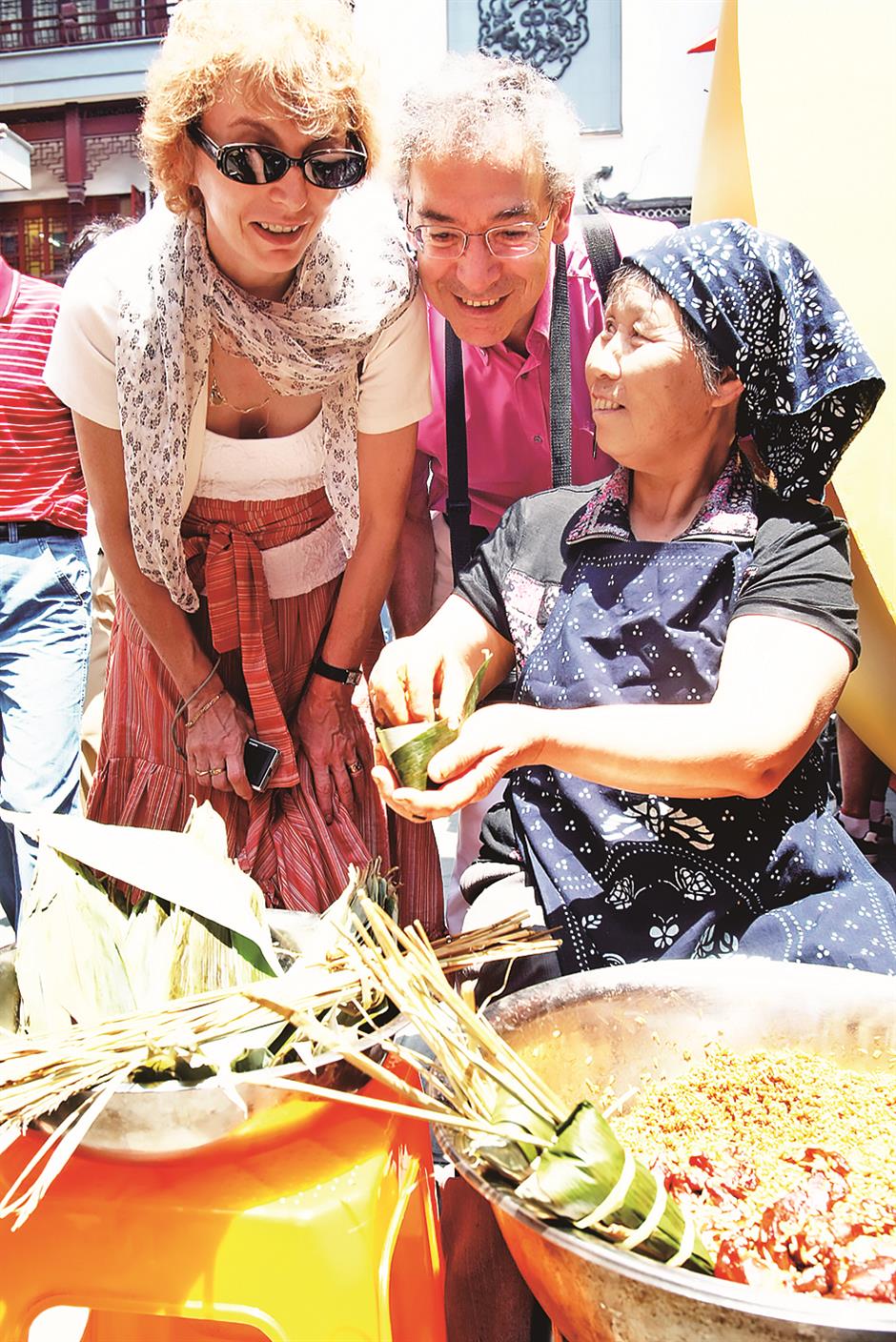 Zongzi, the traditional food for the festival, is wrapped in bamboo or reed leaves. In addition of sticky rice, they may also have fillings like date, red beans, meat and egg yolks.

Since then, every year on that day, Chinese people participate in dragon boat races and eat zongzi, now a traditional food made of sticky rice wrapped in reed leaves, to commemorate the great patriotic poet.

Starting in 2008, that day on the Chinese lunar calendar, now known as the Dragon Boat Festival, has been designated as a national holiday.

Dragon boat racing remains today the most important activity during the festival. The wooden boats appear in different designs and sizes, but they are invariably decorated with Chinese dragon heads and tails. There are usually 10-20 people in a single boat to paddle in synchronicity and according to the rhythms of a beating drum. To win a race, it calls for long-time training, great team work and a firm determination to succeed. According to old beliefs, winning a dragon boat race may bring good luck and happiness.

Zongzi, meanwhile, is the traditional food for the festival. They are usually of an adult fist’s size and wrapped in pyramidal or rectangle shapes in bamboo or reed leaves. In addition to sticky rice, they may have fillings like date, red beans, meat and egg yolks.

Also, during the festival, people hang Chinese mugwort and calamus on their doors to ward off evil spirits as well as bugs that appear in early summer.

In 2006, the festival was included into the first batch of national intangible cultural heritages in China and three years later, it was inscribed on the UNESCO’s Representative List of the Intangible Cultural Heritage of Humanity.

The world body describes the Dragon Boat Festival as a commemoration that “strengthens bonds within families and establishes a harmonious relationship between humanity and nature. It also encourages the expression of imagination and creativity, contributing to a vivid sense of cultural identity.”