A great sword with a great story 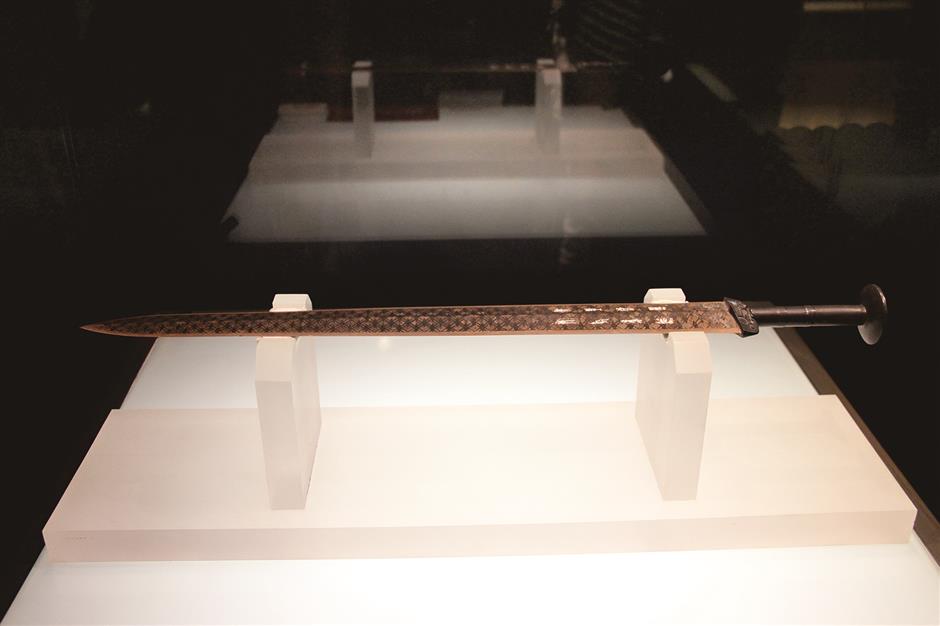 Even after more than 2,000 years, the Sword of Goujian, a bronze double-edged sword, can still easily cut through 20 layers of paper at once.

Uncovered in 1965, it is one of China’s national treasures and now rests in the Hubei Provincial Museum.

The earliest Chinese swords found so far date back to the Western Zhou period (1046-771 BC).

The early bronze swords served as a weapon and a symbol of power.

By the Tang Dynasty (AD 618-907), literati were wearing swords as well, as an ornament, a sign of standing or of ambition.

The sword also served a ritual role in burials.

Many were buried in tombs with the bodies of the ancient Chinese aristocracy.

And the most prominent example is the Sword of Goujian. The blade of the Goujian sword is patterned with repeating rhombus, or parallelograms, and the hilt is decorated with blue crystal and turquoise.

It was unearthed from the construction site of the Zhang River Reservoir in Jingzhou, Hubei Province in 1965. In the area, archeologists discovered more than 50 ancient tombs of the state of Chu (1115-223 BC).

The sword is one of around 400 artifacts including bronze vessels, jade and lacquerwares that were found in the Wangshan No.1 tomb.

But at first, it was not known who was lying in the tomb.

In December 1965, archeologists opened the coffin and found a sword with a wooden scabbard beside a human skeleton.

Those archeologists were thrilled at its gloss and the fact it had not tarnished over the centuries.

It is said the blade was still so sharp that an archeologist’s finger was cut.

Two columns of text were engraved on one side of the blade. These eight characters were written in an ancient script, called as bird-worm script, which evolved from seal characters, a style of Chinese calligraphy.

Among the eight characters, six were recognizable, translated as “King of the state of Yue (2023-222 BC),” “personally made” and “personal use.”

But it did not immediately identify the owner because there were nine monarchs in the history of the state of Yue, and the two characters that may have been the name of the owner were arcane.

In 1966, Tang Lan, a researcher at The Palace Museum, said these two Chinese characters were “Gou” and “Jian.” Goujian was one of the kings of the state of Yue, ruling during 496-465 BC.

In 494 BC, Goujian was captured by the state of Wu (12th century – 473 BC) and served as a servant to its king for three years before being released.

Returning home, Goujian resumed his reign. He slept on brushwood, forced himself to drink bile every day and said to himself “Goujian, do you forget the mortification that you experienced in the state of Wu?”

Appointing experienced politicians as advisers, such as Fan Li and Wen Zhong, Goujian determined to take his revenge. And that meant making weapons.

One day, he dreamed of an immortal who suggested going to Qinxi Mountain where magic water and gems were available.

It is said that Ouyezi cast five rare swords here — Zhanlu, Chunjun, Shengxie, Juque and Yuchang. By virtue of these superior weapons, Goujian defeated the state of Wu in 473 BC.

According to experts and descriptions in an ancient book, the Sword of Goujian is similar to the one called Chunjun.

A bamboo slip unearthed from the tomb indicates that the occupant was Hua.

Based on the discovery, some archeologists believe that the person was Shao Hua, a great noble during the reign of the King Huai of Chu.

He helped the king defeat the state of Yue. Therefore, the king awarded the sword as a trophy to him.

To highlight his illustrious war exploits to the following generations, Shao was buried with the famous sword.

But other experts think that the sword is not a trophy but a dowry. One of Goujian’s daughters married the King Zhao of Chu and thus the sword might have been sent by Goujian to the king of the state of Chu, who later gave it to Shao.

No matter which version is true, one thing is for sure that the casting of the sword is superb. It is made of alloy of copper, tin, lead, sulfur, aluminum and other metallic elements.

The ridge of the sword has a high concentration of copper, which makes it more malleable. The edge contains a large amount of tin, making it harder and sharper, and sulfur helps it resist tarnishing.

This national treasure echoes the history of China.

It is a story of great conflicts, power struggles and lasting craftsmanship.