Tall tale of a giant's quest to catch the sun

CHASING light and warmth may have been an ultimate pursuit for all humans, but there was a Chinese man who actually put it into practice. He chased the sun to where it set, and left a shelter there for his inheritors.

There was a vast mountain in the desolated plains of the north. And in the mountain forest lived a tribe of mighty giants. They were led by Kuafu, the grandson of the god of the netherworld, and named their tribe after the leader. The giants were strong but kind, leading simple lives.

The leader Kuafu was not only tall and muscular, but also had strong legs which enabled him to run faster than a rabbit. He often led his people to fight with beasts for survival. Thus he often wore yellow snakes he caught as earrings, and swung snakes in his hands with pride. 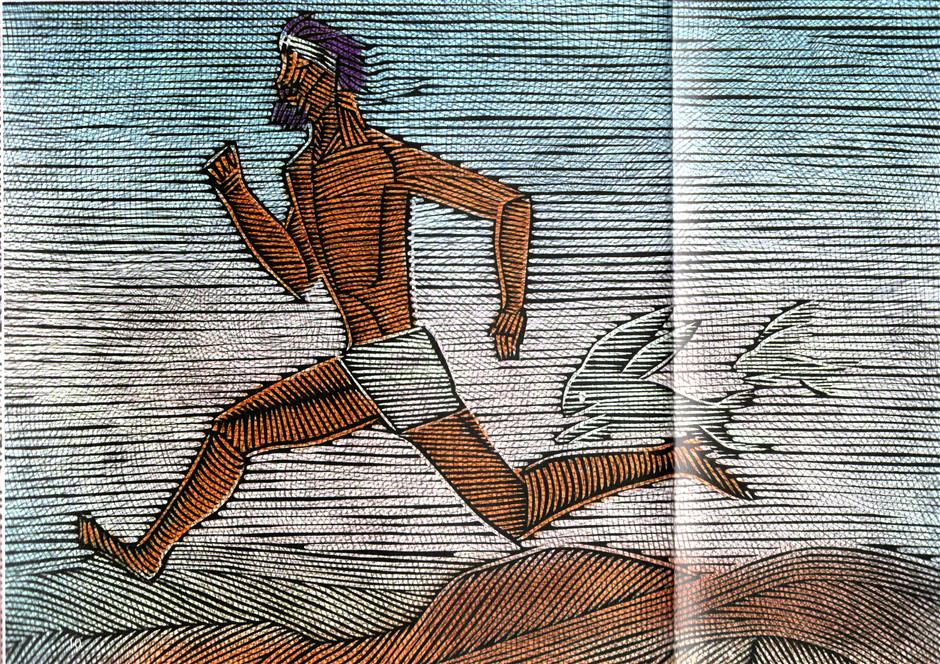 Kuafu was not only tall and muscular, but also had strong legs.

One day, Kuafu sat on a slope watching the sun slowly setting in the west. As the land was gradually covered in darkness, he suddenly came up with a wild idea. If he captured the sun, would he then bring bright light and warmth to the world forever?

Hearing his idea, many people tried to talk him out of it.

“Don’t even think about it,” one said. “The sun is too far way, and you will die from fatigue!”

“The sun is too hot. You will be burned alive,” another said.

But Kuafu was determined to complete with the sun and try to catch it.

As the sun rose the next morning, Kuafu bade farewell to his tribe and started chasing the sun with a cane in his hand.

The sun was just like a naughty child, prancing across the sky. Kuafu raced across the land like a gush of wind, chasing the sun relentlessly. He chased it over mountains and rivers, shaking the land with every step he took.

The sun rose higher and higher and yet Kuafu kept chasing it with sweat streaming down his face.

He was famished and extremely thirsty so he ran to a fruit tree to quench his thirst and relieve his hunger. When tired, Kuafu leaned against his cane and took a quick rest.

The chase continued and the sun began dropping in the west.

Kuafu got agitated and shouted, “You keep on running, and see if I don’t catch you!”

The sun didn’t seem to care at all and moved even faster into the western horizon. Kuafu twirled his cane, and scurried across the plains, racing thousands of miles toward the sun. It seemed that he was getting closer and closer. He chased it all the way to the Mount Yanzi. As Kuafu stretched forth his mighty arms in an attempt to catch the ball of fire, a wave of heat gushed in, blowing him far way. Fortunately, he regained balance with his cane. 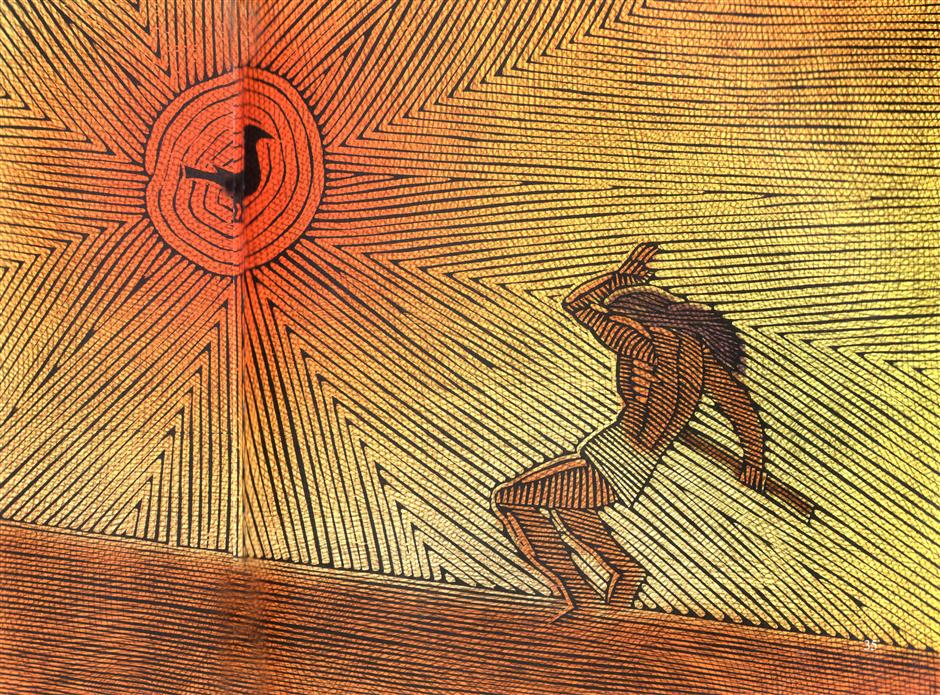 As Kuafu got close to the sun, a wave of heat gushed in, blowing him far way. Fortunately, he gained balance with his cane.

Kuafu kept his chin up and started chasing yet again. The closer he got to the sun, the hotter it got. His sweat drained profusely, leaving his clothes soaked. He took his clothes off and exposed his dark and strong chest.

As he kept running, Kuafu felt terribly thirsty. His throat was dry and sore. Suddenly, his eyes lit up with the Yellow River coming into his sight. He rushed over and leaned into the river, gulping up the water fiercely.

He was so thirsty that he drank up all the water in the Yellow River. Still thirsty, Kuafu ran to the Weihe River and started gulping again. The Weihe River got drunk dry as well. But Kuafu’s thirst was still not quenched. So he headed north to another big lake.

The big lake sat in the north of Mount Yanmen. The water was clean and clear, with birds flocking and flourishing around. Thinking all of the fresh water, Kuafu scurried over even faster. He tried to get there before the sun set, so that he could keep on chasing the sun again after quenching his thirst.

However, his footsteps got heavier and heavier. The intense thirst slowed him down immensely, and Kuafu fell down like a mountain with a large booming sound.

Just as he fell, Kuafu flung his cane over with all his strength. The cane made an arc in the air and then fell into the distance.

Just then, the sun set into the Yu Valley of Mountain Yanzi, leaving a golden afterglow on Kuafu’s face.

The sun rose again the next dawn, yet Kuafu had already turned into a huge mountain where he fell down.

On the northern side of the mountain, there was a lush peach orchard, which was turned from his cane. 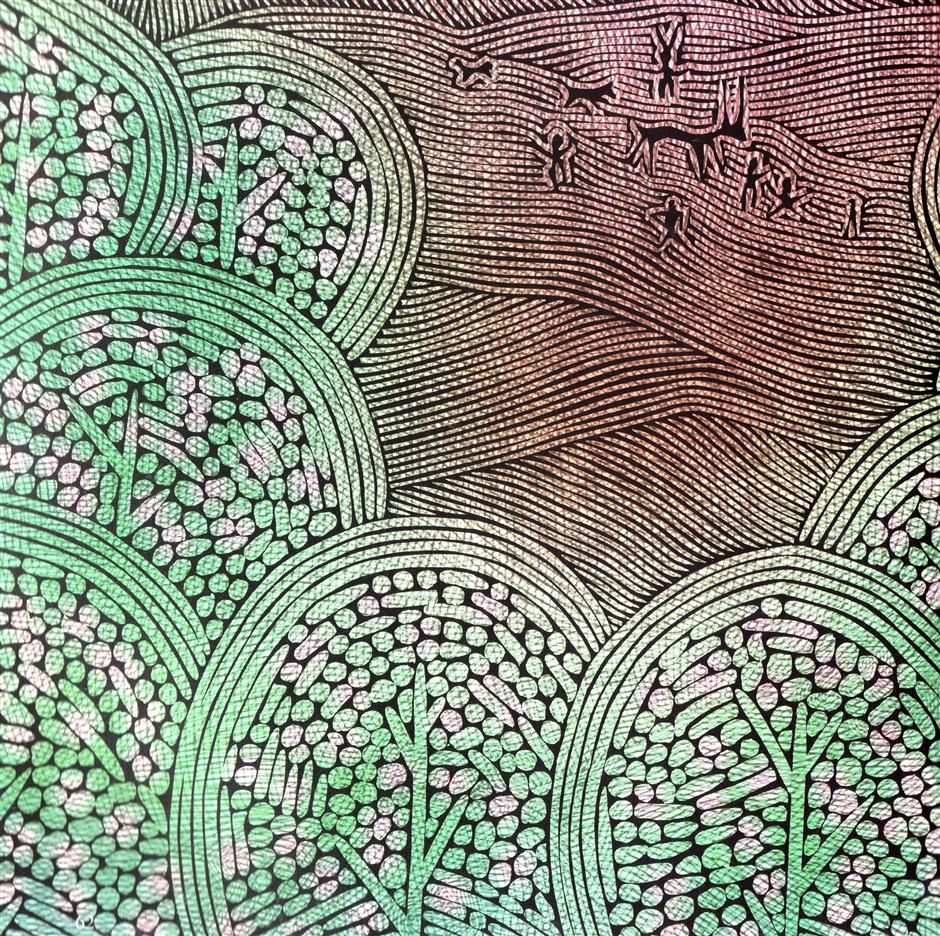 Kuafu believed that there would always be someone else trying to chase the sun like he did and the peach orchard he left would help them quench their thirst. Just as he planned, the orchard flourished, creating shelter and shade for passers-by and offering fruit to relieve their thirst and exhaust.

The Kuafu Mountain, which is said to be Kuafu’s body, is located in Lingbao City of Henan Province, linking with the Huashan Mountain in Shaanxi Province. The Lingbao city used to be called Taolin (Peach Forest) County, as commemoration of Kuafu’s deeds.

Though the myth suggested that Kuafu chased the sun individually on the spur of a moment, some scholars conjectured that it may have actually been a planned action for the whole tribe searching for water source in the draught. Chasing the sun indicated that the tribe tried migrating westward for water.