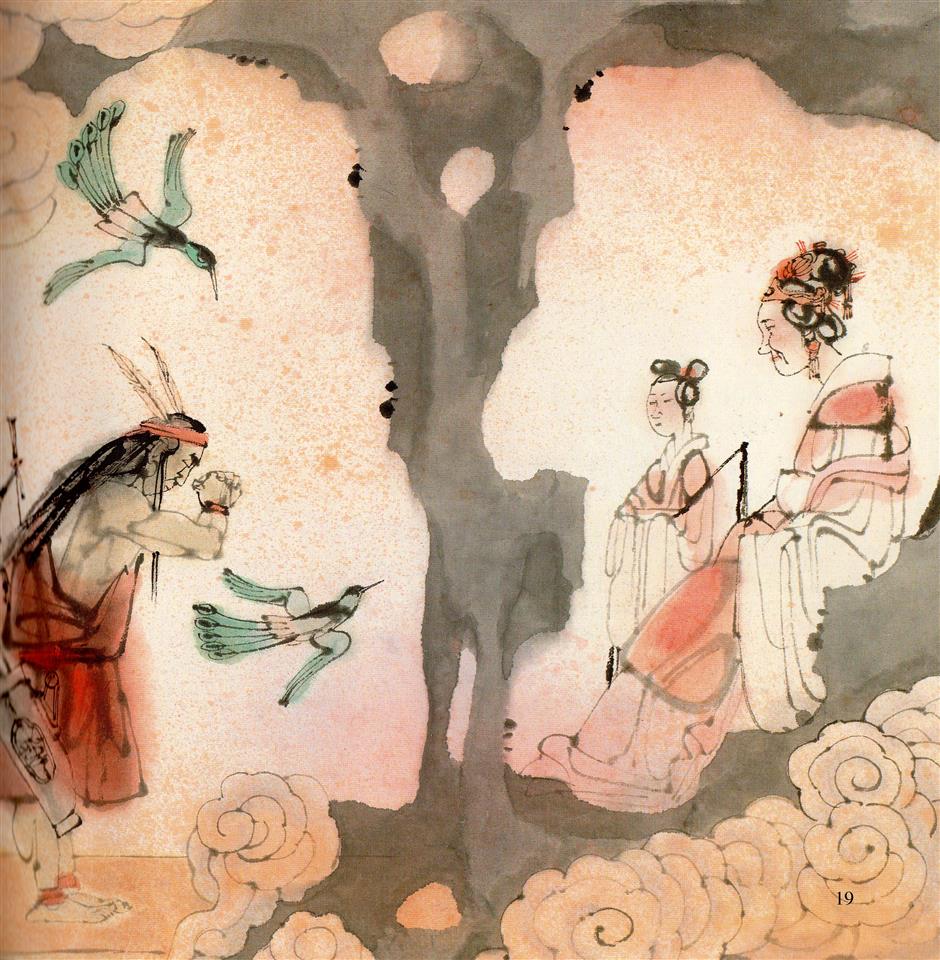 THE big moon of Mid-Autumn Festival not only witnessed countless family reunions in China, but also the tragic separation of a loving couple — Yi and Chang’e.

On the lofty Kunlun Mountains, embraced by the thousand-mile Ruoshui River and screened by the fire-roaring Yanshan Mountain, lived the immortals.

Yi went to the divine mountain, seeking Xi Wang Mu (Queen Mother of the West), who controlled all the disasters and evil monsters, to answer his puzzles.

The fires in the Yanshan Mountain forever burned while the Ruoshui River could not carry even a feather. How could Yi reach Xi Wang Mu’s stone house on the Kunlun Mountain?

Yi tied some silk to one end of his arrow, the other to his wrist, drew the bow with full strength and fired the arrow. Just as the silk tightened, Yi flew through the air and let himself fly with the arrow at full speed. He crossed the winding Ruoshui River and traversed the flame of the Yanshan Mountain. Three emerald green birds flew swiftly alongside Yi and sang lively in the fire clouds of the Yanshan Mountain. They were Xi Wang Mu’s messengers who guided Yi to the stone house.

Even though she was over 800 years old, the queen’s jade-white face still glowed.

Every morning and evening, she would show her tiger fangs and leopard tail, whistle on the top of the mountain with disheveled hair, to deter evil beasts and spirits.

Xi Wang Mu invited Yi to sit on a mat made of tiger’s whiskers and treated him to fairy jujubes and peaches.

Yi asked the queen, “Though the fierce monsters were killed and the nine suns were shot, disasters still prevailed in the world. How can we prevent the disasters and warn off evil spirits? How can mankind gain immortality like you?”

Xi Wang Mu replied, “Day in and day out, the sun rises from the East and descends to the West. Year in and year out, plants flourish in spring and wither in winter.

“Everything in the world is immortal  as long as your eyes aren’t confined to only the specific. It is also the case with humans. They are still prosperous on the Earth even though they experience all those disasters and hardships.”

Yi suddenly enlightened, said, “I got it!” 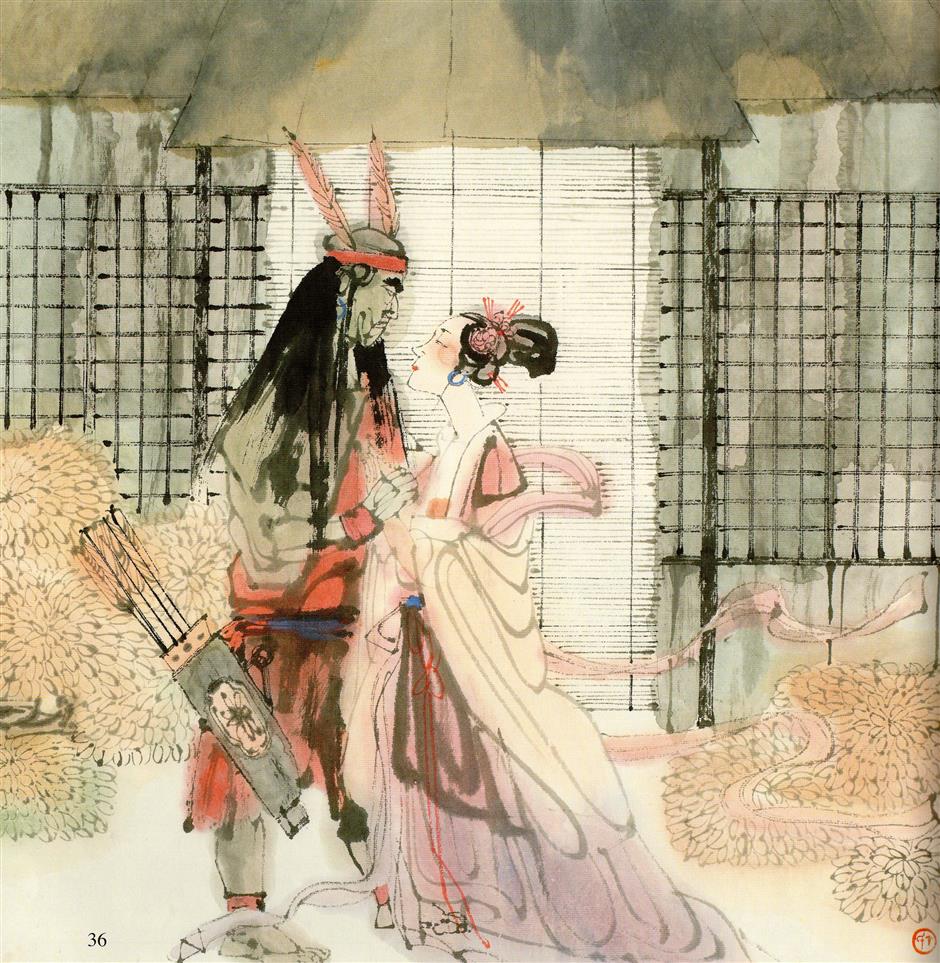 Yi decides to stay on Earth to be with his wife Chang’e.

“There are also ways for an individual life to keep immortal,” the queen added. “Take Fuxi, Nuwa, Shennong, the Yellow Emperor, Yao and Shun for example. Their deeds and contributions to  mankind are remembered forever, which makes them immortal.

“There is also a secret elixir. Considering your distinguished contribution and care for the people, I will make an exception by offering it to you,” said Xi Wang Mu, who then raised her hand gently, delivering three little pills to Yi through air.

Returning home, Yi looked up at the moon at midnight and recalled Xi Wang Mu’s words, “Take them on a full-moon night and you can get an eternal life.”

Who wouldn’t desire immortality? But Yi quickly dismissed the idea. If he went up to the heaven, who would fight for the people against evil? And how could he leave his wife Chang’e alone on Earth? Deciding to stay, he put the elixirs in a delicate wood box on the altar.

One of Yi’s men, Feng Meng, learnt about the elixirs and planned to steal them.

On the night of the 15th day of the eighth month in the Chinese lunar calendar, when Yi was out with his apprentices, Feng Meng broke into Yi’s house and threatened Chang’e to give him the elixirs. Just as Feng Meng rummaging through chests and cupboards, Chang’e rushed to the box on the altar and swallowed the pills so that they would not be taken by the greedy man.

Before figuring out what was going on, Chang’e found her body, floating like feather, flying out of the window and ascending directly to the moon.

When Yi returned, he could not find Chang’e anywhere, just the empty box on the altar. He rushed out of the house, and saw a big bright full moon hanging in the sky. He saw pavilions and trees in the moon and his wife looking at him sadly.

Yi attached the arrow to his bow and aimed at the moon, trying to save his wife. But, before releasing the arrow, Yi noticed the moon shivering, which restored him to reason. Would he really deprive the people of the moon’s radiance for taking back his love?

He put away his bow and arrow and stared at the misty figure of Chang’e in the moon above Guanghan Palace.

The palace was deserted. Chang’e only had a jade rabbit for company. The jade rabbit kept smashing herbs for Chang’e, hoping that one day they could work out an elixir which could help Chang’e return.

Some legends suggested for Chang’e to go to the huge laurel tree and talk to a man named Wu Gang living in Guanghan Palace.

As Wu made huge mistakes in his practicing immortality, he was punished so had to cut the laurel tree in the palace day and night.

He was promised immortality the day he cut down the laurel tree. But every cut Wu made on the laurel tree would heal immediately, which made all his effort in vain. Chang’e saw this and it made her sad. 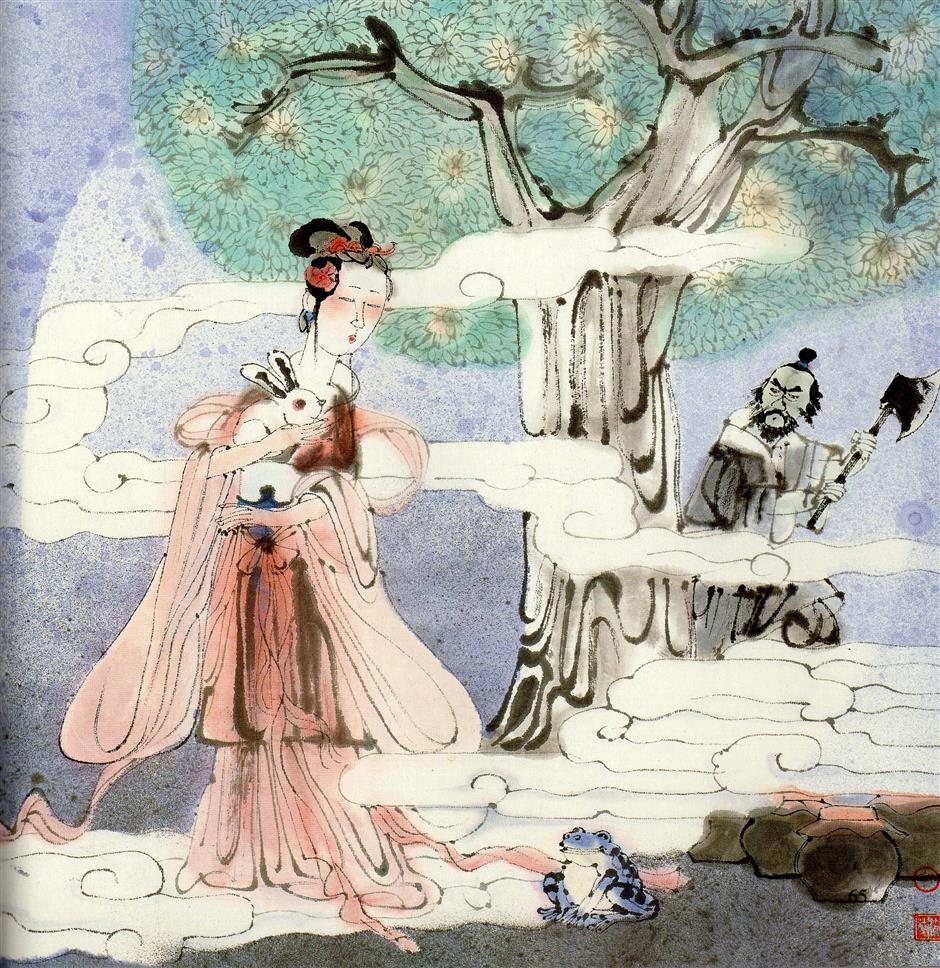 Chang’e swallowed three elixir pills to gain immortality and live on the moon.