Woodblock illustrations of 'Romance of the Western Chamber' 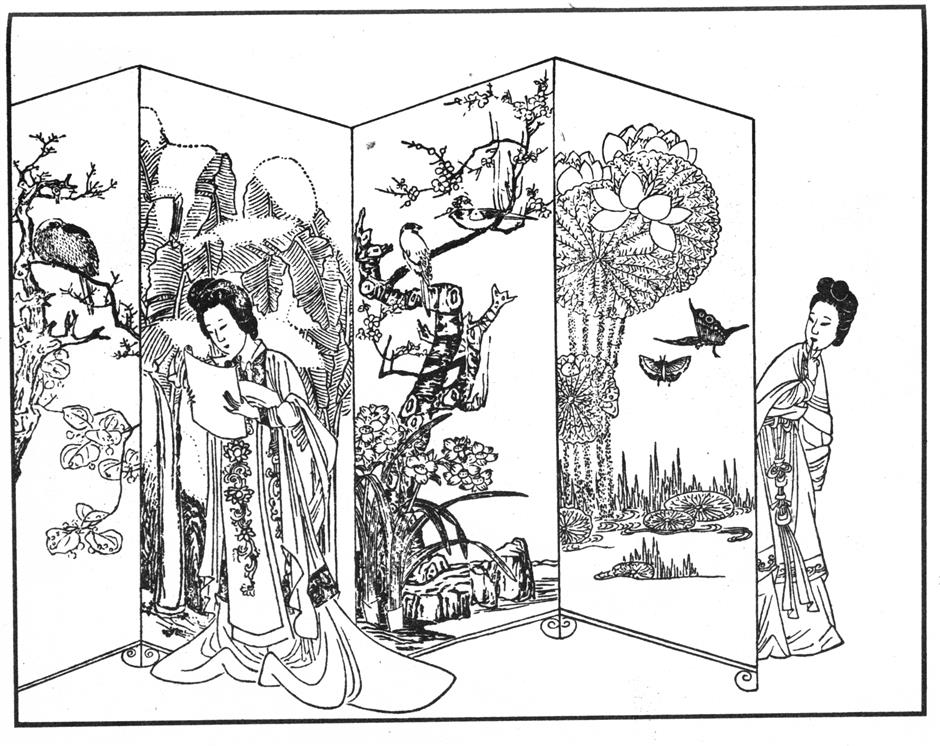 With the rising popularity of printed novels and plays in the Ming Dynasty, woodblock illustrations were in great demand. Chen Hongshou’s illustrations from “Romance of the Western Chamber” feature figurative, elegant contours and curvilinear drapery lines, which can be traced back to Chinese painting traditions.

Most scholars believe that woodblock printing technology originated in China about 2,000 years ago. The technology was first used mainly to print texts, but later it was also applied in creating artworks. And the oldest extant woodblock print images date back to China’s Han Dynasty (202 BC-AD 220).

However, some art historians claim that woodblock print art was first and mainly employed to spread Buddhism in China, and that it was not until the Song Dynasty (960-1279) that it became a popular art form.

They often cite a volume of woodblock prints, titled the “Diamond Sutra,” to support such assertions. The tome was found in 1900 in Dunhuang, Gansu Province, an important hub on the ancient Silk Road. Printed in AD 868, it features sophisticated Buddhist images on its head page. And it is also widely deemed as one of the earliest woodblock print books in the world.

Historical records and extant artworks provide backing to the argument that starting from the Song Dynasty, woodblock printing became a popular art form in the production of playing cards and illustrations of folk stories and popular novels.

This trend continued in the following dynasties and all the way down to 1930s and 40s in China.

When discussing the evolution of woodblock art in China, one can’t ignore the name Chen Hongshou, a renowned artist and scholar who was active during the late years of the Ming Dynasty (1368-1644).

In 1599, Chen was born into a government official’s family in Zhuji in east China’s Zhejiang Province. He was an art prodigy and according to legends, began to paint when he was only 4. By the time he was 9, his figure paintings had already earned him a high reputation.

However, despite repeated attempts, Chen wasn’t successful in the imperial civil service exams, a key channel for all intellectuals to pursue fame and wealth in China for more than 1,300 years.

He later became a Buddhist monk and supported himself by selling art. 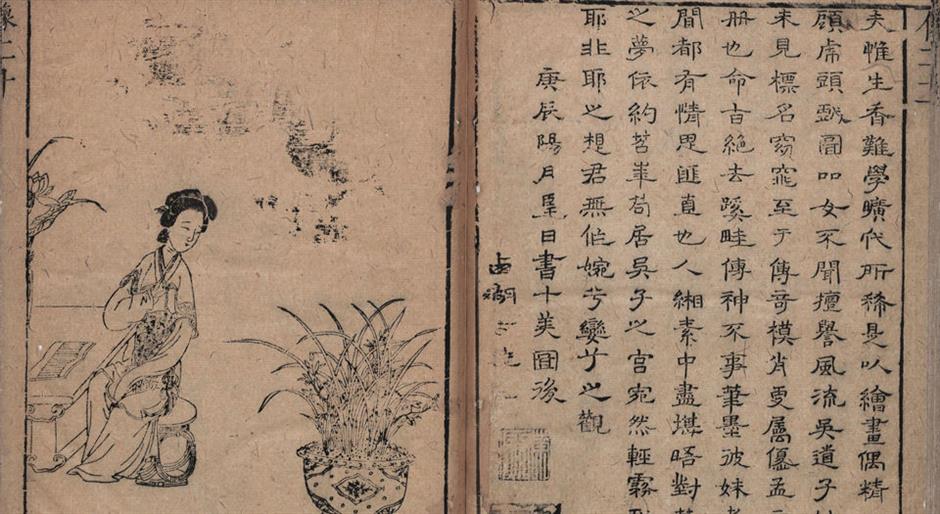 Another woodblock illustration printed in an edition of “Romance of the Western Chamber.”

In addition to figures, Chen was also highly gifted in painting other popular subjects such as birds-and-flowers, grasses-and-insects, and landscapes.

Known as a “transformation” artist of the late Ming Dynasty, Chen also did quite a few illustrations for woodblock prints, which are generally considered his greatest contribution to the development of this art form.

Chen’s woodblock illustrations were created mainly for playing cards, novels and plays. Among his best works of this genre are his most innovative and exquisite illustrations for a play entitled “Romance of the Western Chamber.”

Known to many as the “Lovers’ Bible,” the “Western Chamber” was written by Wang Shifu (1260-1316), a Yuan Dynasty playwright. The play was widely praised for spreading the deeply ingrained Chinese aspiration: “May all lovers in the world end up in wedlock.”

Chen illustrated at least three versions of the play, the first dating to 1630. In such illustrations, Chen again used his superb skills in figure painting, which usually features figurative, elegant contours and curvilinear drapery lines.

By employing theatric postures and costumes, Chen also endowed his figures with a dramatic effect.

The National Palace Museum in Taipei now has in its collection a complete set of 20 woodblock illustrations plus a portrait of the heroine from “Romance of the Western Chamber,” which were jointly created by Chen and several other artists of his time, including Zeng Jing (1568-1650), also a famed painter of the late Ming Dynasty best known for his portrait works.

The 20 illustrations, 20.3x13.8cm each, include 10 featuring beautiful women in various scenes and 10 featuring birds-and-flowers scenes.

They are widely praised today as among the most representative artworks of Chen, a great master of Chinese woodblock illustration.

Woodblock illustrations of ‘Romance of the Western Chamber’