A chamber music festival at the Shanghai Conservatory of Music this week drew musicians from Europe and the US, along with China’s top chamber music performers. It came after the conservatory set up its International Chamber Music Center last year.

“Chamber music entered China relatively late, while symphonies were introduced in the 1920s,” said Jensen Horn Sin Lam, artistic director of the center. “But a good symphony performer must have solid chamber music foundation. That’s why chamber music plays an important part in our education.”

Chamber music is composed for small ensembles of instruments, such as trios, quartets and octets. Each player plays his own part of the music, in contrast to orchestral music, where multiple performers, such as a string section, play the same part. Chamber music requires great precision and communication among a small number of players.

The great composers, such as Beethoven, Mozart and Schubert, all wrote chamber music that is perhaps less widely known than their famous orchestral works. At the same time, there are chamber music aficionados who prefer the richness and subtly of music that evolved from home performances beginning in the middle of the 15th century.

Ding Zhinuo, a Chinese string musician, said the development of Western-style chamber music in China has been slowed by a shortage of resources, including venues and teaching materials.

“Symphonies were better promoted after China opened up to the world, and concert halls were built to house large orchestras,” said Ding. “Those playing chamber music had to look for smaller venues or even borrow meeting rooms. Lack of musical scores was also a problem.”

Ding, a graduate of the Shanghai Conservatory of Music, joined the Shanghai Women’s Quartet in 1960, China’s oldest four-member ensemble.

“The situation has much improved,” she said, “though we still have some catching up to do.”

According to Lam, who has been a professor of chamber music and viola at the conservatory since 2006, chamber music is like synchronized swimming. Swimmers have to give full play to their individual skills while performing as a team.

“Our musical students tend to concentrate too much on polishing their personal skills rather than improving their interactive abilities,” said Lam. “Playing chamber music requires both musical and social skills that differ from playing solo or symphonic works. The performers must merge their personalities into the music through tacit understanding.” 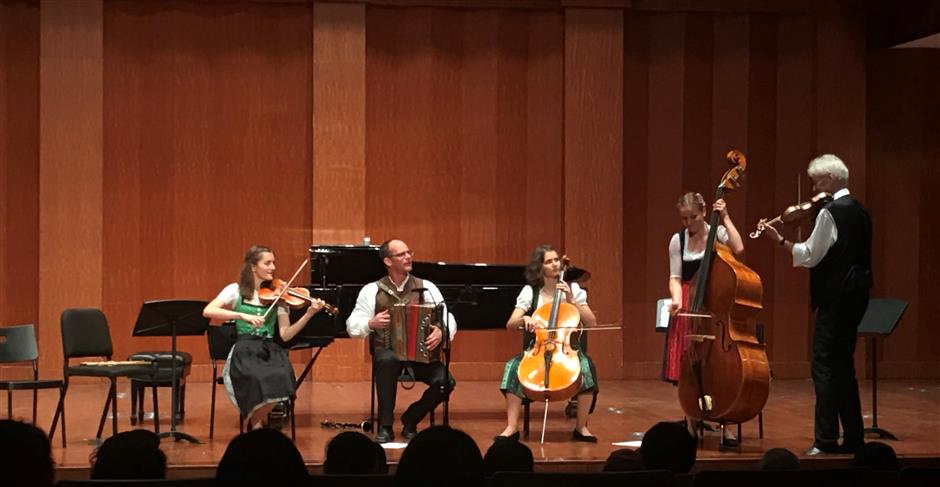 Artists perform Austrian folk music during a seminar at the festival.

Lam’s words were echoed by Austrian violinist Johannes Meissl, artistic director of the European Chamber Music Academy and a guest professor at the Shanghai conservatory. He joined Lam in a performance of Brahms’ “Piano Quintet in F Minor” at the closing concert of the chamber music festival. It is scored for piano, two violins, viola and cello.

“The core thing about music is communication between individuals who have their own understanding toward the music while having thoughts to share,” said Meissl. “They have to keep an open mind to accept and to exchange during the communication. For chamber musicians, the communication at various levels is both challenging and valuable.”

The concerts held during the chamber music festival featured the Kebyart Ensemble, a saxophone quartet from Barcelona, and the Trio Vitruvi from Denmark, as well as renowned Chinese trios and quartets.

Chinese traditional music also involves ensembles, even if they aren’t generally called chamber groups in the classic sense of the term. This ancient musical form was also represented at the festival.

The Nanyin Performance Group of the Shanghai Conservatory of Music, established in 2018, performed the work “Fujian Nanguan Gallop.”

The Chinese Traditional Ensemble of the Shanghai conservatory also performed, playing instruments that included the erhu, the suona, the liuqin (a willow-shaped plucked instrument), the dulcimer and the guzheng, or Chinese zither.

Apart from seminars and workshops, 10 masterclasses were held during the festival.