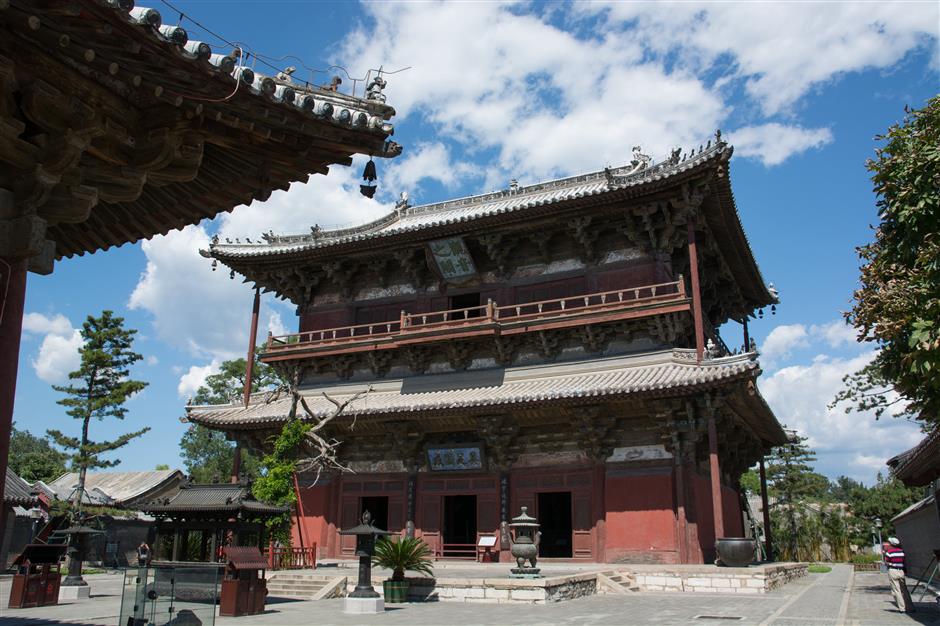 The Dule Temple is one of only three temples of its kind and boasts the oldest gate in China today.

The Dule Temple (Temple of Solitary Joy) caught the eyes of Japanese scholar Sekino Tadashi in 1931 on a trip to Hebei Province when passing through Jixian County in Tianjin.

The lonely temple stood by the road, run-down and dilapidated. Sekino identified it as a traditional compound of the Liao Dynasty (907-1125).

One year later, Chinese architectural historian Liang Sicheng (1901-72) made a field trip to the Dule Temple based on the Japanese expert’s findings.

Liang took it upon himself to highlight how the over 1,000-year-old temple had been ignored, neglected and damaged by wars and wrote a detailed report bringing it to the attention of the public.

The temple, which covers an area about 16,000 square meters, is one of only three temples of its kind and boasts the oldest gate in China today.

The Shan Gate, also known as Hill Gate, has a complex of three rooms. It is supported by 12 wooden posts, each 50 centimeters in diameter.

Aligned in four columns and three rows, the post formation is typical of religious architectural shines of that era.

The gate’s roof, built in five ridges and four slopes, was called a “Wu Dian roof,” which is reserved for the most distinguished hall or shrine with the highest level.

Also, there are a couple of chi wen (bird-shaped ornaments with a long tail on a ridge roof), which have their mouths wide open as if they are about to swallow the ridges.

In the gate complex, two ferocious-looking clay-colored sculptures of “heng” and “ha” generals have been guarding the temple for centuries. Topless and barefoot, the two muscular warriors, about 4.5 meters tall, lean forward and glower down at people with a sword in their right hands.

Past the gate stands the Guanyin Hall. It is about 23 meters high and China’s oldest wooden pagoda-style structure.

The hall has three stories, though from the outside, it looks as if it is a two-story building as there are no eaves separating the hidden second floor and the third one.

The hall’s giant roof, extending out 5.2 meters, is supported by 152 dougong (a unique structural element of interlocking wooden brackets), which made the hall strong enough to withstand numerous earthquakes over centuries.

The temple’s biggest highlight is the 16-meter-tall colored clay Guanyin Buddha statue, whose head almost reaches the top of the third floor. The status is the biggest of its kind in ancient China. 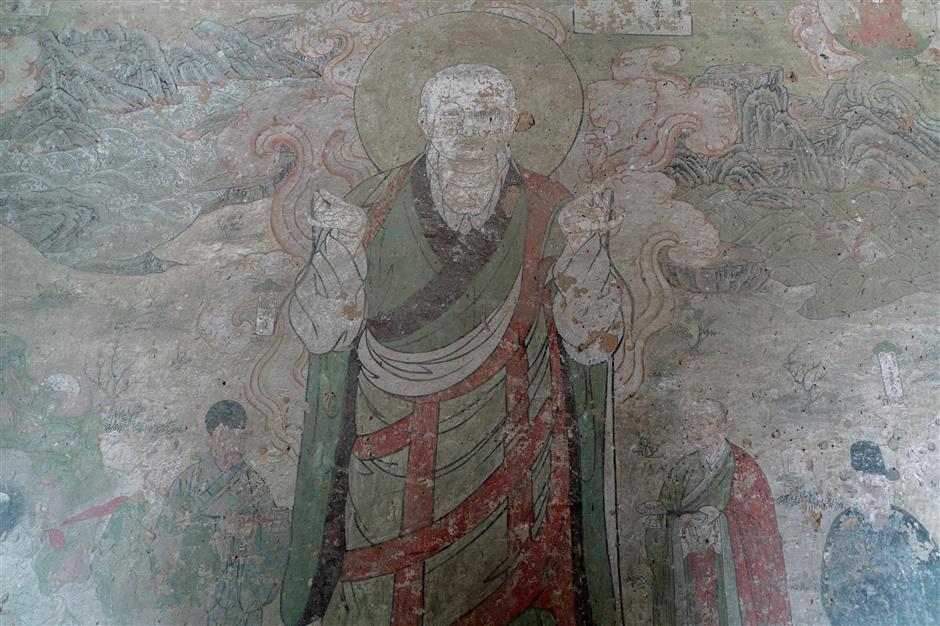 The Guanyin Hall’s four walls are painted with beautiful murals.

At 45 meters long and 3 meters tall, the magnificent Buddhism-themed murals depict the religious events of the arhats with their names, addresses and words of praise.

Each painting can be enjoyed separately with a story, as well as linked together to be a unified piece of artwork.

They were originally hidden under a thick layer of white paint for more than 200 years. They were discovered in 1972 during a renovation project, which shocked the country’s art world.

The surface of the walls for the mural were specially made.

A mixture of fine sandy soil, straw, mud and clay was applied, pressed flat and smoothed, before the surface was painted with a white powder. Ancient artists used various mineral pigments of red, white, green, purple, blue, yellow, pink and black, which is still vivid today.

Emperor Qianlong (1711-99) ordered a palace to be built at the temple for his short stay in 1753. The emperors after Emperor Qianlong all came to the palace and left a large number of poems to eulogize the temple.

The architecture had escaped damage in several major conflicts but, in 1966 when the “cultural revolution” broke out, “four olds” (old customs, traditions, cultures and ideologies) were demolished.

Liang arrived at the temple and applied to the Ministry of Culture to install a lightning rod and iron wire net over the big Buddha statue. Liang thought it was the only way to protect the temple from being destroyed.

In 1976, a 7.5-magnitude earthquake in Tangshan resulted in 250,000 casualties and caused the temple wall to collapse.

The Guanyin Hall, however, stood firm and escaped with only a few minor scrapes such as cracked plaster work on the walls.