Li Bin, who turns 70 soon, has been working 15 hours a day lately, making adjustments to his latest painting. He has been working on it for nearly five years, and has exhibited it three times, but adjustments were needed for its recent fourth exhibition in Nanjing, Jiangsu Province, that kicked off on September 18 and lasts until March next year.

“It’s a piece about historic events, and just like history, you keep getting new discoveries,” Li said.

Standing 4 meters tall by 172 meters long, the piece depicts the two-and-half-year Tokyo Trial, in which 28 Japanese political and military leaders were charged with war crimes by judges and prosecutors from 11 countries, including China.

It includes around 450 historic figures involved in the trials — prosecutors and judges from the 11 countries, the defense team comprised of American and Japanese lawyers, witnesses, defendants and more. Finding exactly how each of them looks like was already a big challenge. 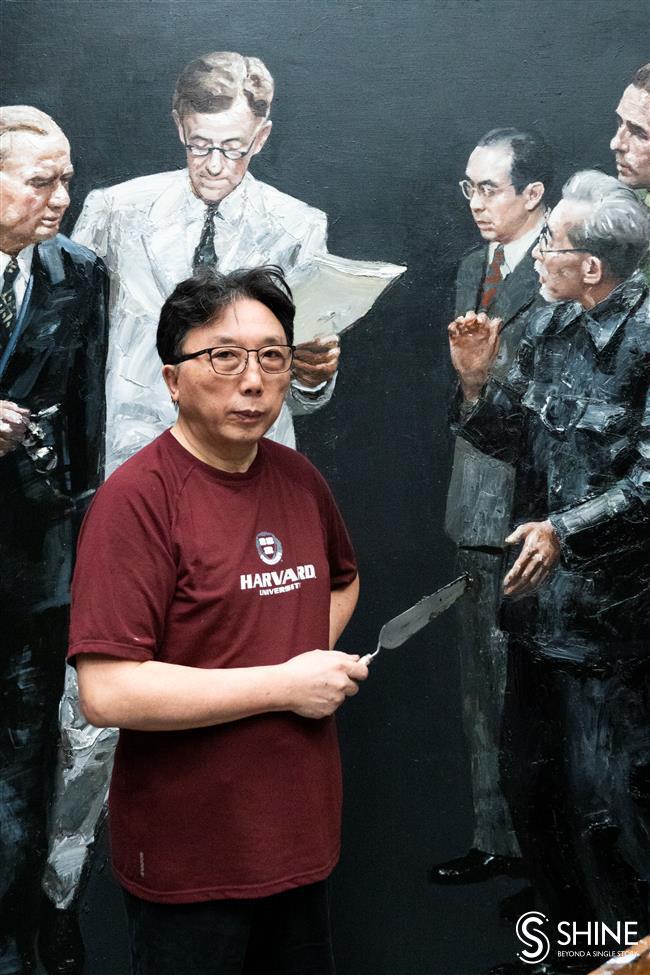 With the help of experts from Shanghai Jiao Tong University’s Center for the Tokyo Trial Studies, Li and his students and assistants spent years researching the subject, including multiple trips to archives in Taiwan, Tokyo and the United States. Aiming to provide a comprehensive context, Li prints some of the archived arguments and proofs presented at the court on the painting, in Chinese, English and Japanese.

Li calls himself “a painter with great interest in history, particularly modern Chinese history.” He further says it is his responsibility to illustrate history as a portrait painter, in a time when many young people may not even know their family history.

“The purpose of looking at history and having memorials is to let our children and grandchildren know the cause of sufferings so that similar ones can be prevented in the future,” he said.

“You can’t just look at today. If you don’t even understand the history of your grandparents, how can you tell that to your children and grandchildren?”

In a career of more than 50 years, Li has delved into many moments of modern Chinese history, including his propaganda works such as many Chairman Mao portraits in the 1960s and 1970s, reflections on the “cultural revolution” (1966-76) and its effects on the entire generation and nation in the 1980s, new life of China’s last emperor, and many other unique events.

His interest in modern Chinese history was a major factor in his return to Shanghai, his birthplace, in 2001, after living in the US for 12 years. Another factor, he laughed, was food. His daughter, an associate professor at Harvard University, complains every time they travel together and Li tries to find red lanterns, often hung outside Chinese restaurants in foreign countries.

“You know what I realized,” he laughed. “Cultural shock is all encapsulated in your stomach.”

His parents were also growing old — Li hadn’t spent much time with them since he left home after volunteering to be sent to the wilderness in northeast China’s Heilongjiang Province during the “cultural revolution.” Later, he was enrolled in a master workshop in Central Academy of Fine Arts in Beijing, before studying in Japan in 1987 and setting off for the US two years later.

Friends were another factor. Many of his classmates and fellow painters, including famed contemporary painter Chen Danqing, who had similar paths of going abroad, returned around the same time. Li spends a lot of time chatting with them about the country’s past, present and future.

“My generation, somehow,   feels a natural and authentic responsibility concerning the destiny of our home country. Wherever I was, I was always interested in and painting subject matter about modern Chinese history,” he said.

“We were born shortly after the long turbulence in the country, and grew up as it went through all those dramatic events, then went abroad to a completely different system, reflecting on what really happened from the outside looking in. So much is happening here, which makes living in the US, not changing so much, quite boring.”

Since childhood, Li aspired to become a stage actor, shortly before he was drawn to painting, and spent most of his youth doing propaganda work. In the 1980s, he took a sharp turn, like many at the time, to reflect on the 10 years. He co-painted two comics adapted from highly influential novels that won national prizes and established his fame.

It is also human nature that draws him to subjects like the Tokyo Trial, despite the challenge of combining history and his aesthetics, trying to capture history on his canvas by studying and depicting the state of mind of every participant, in addition to his efforts in historic research.

“I didn’t work on this for the past five years without pay just to criticize Japan as a country or to encourage anyone to hate Japan or Japanese people,” Li said, adding that he hopes to exhibit the piece around the world in the future, especially in Japan.

“It was a moment in the history of righteous power against evil, and the Japanese people, not those provoking military expansion, were also on the righteous side. It’s intended to become a platform and material in the future so that we can have dialogue with Japanese intellectuals, or even right-wing leaders, on this issue that was never really resolved.”

He also cited the trial’s similarity and difference to the Nuremberg Trials, adding that only by understanding history can we prevent such atrocities in the future.

“Like the Nuremberg Trials, it showed the darkest of human nature, of how horrible things human beings can do to each other when that dark side is provoked. Only by truthfully depicting what it was to provide a comprehensive understanding can we prevent it from happening in the future,” he said.

“It was also much more complex than the Nuremberg Trials in terms of the parties involved and its influence, which makes it all more meaningful to do a project like this.”