Metacollage: where East and West intertwine

Through the guidance of poetic extracts, on-site improvisation and Yu’s original music on demand, it invites visitors to experience a unique audio-visual journey that explores the mind and self, reality and imagination.

Born in Shanghai in 1989, Yu, also known as NISKY, has always explored in both realms of painting and nature. In fact, his English name, NISKY, is an alias forged from the last letters of Federico Fellini and Krzysztof Kieslowski as an homage to his favorite filmmakers.

“Metacollage” is a notion the artist has created since his 2017 exhibition, “Phosphenes.”

It’s a new concept evolved from the artist’s practice on paper and canvas — an attempt to “surpass the limits of collage” and form a “superior unit” between painting and other art forms.

Frankly speaking, it is very difficult to achieve a harmonious visual effect on the same tableau, especially when a variety of art forms with different cultural backgrounds collide through a chain of chemical reactions.

Take “Our Ancestors: Landscape Ensemble 1” as an example. The work is guided by black-figure, red-figure and white-figure techniques during the three periods of the ancient Greek pottery painting from 1050 BC to 750 BC.

However, the specific characters are created by inspirations from Han Dynasty (206 BC-AD 220) figurines, Peking opera masks and African woodcarvings. At the same time, the narrative of the picture is established with the help of mountain shapes in landscape paintings. The artist opts for materials rich in contradictions and struggles, thus revisiting traditions while moving forward.

For instance, the “Surfer Rococo” series embraces the idea of cultural fusion under retro tones. “Surfer” represents his fascination with popular culture in the 1950s and 1960s, while “Rococo” — aside from the misunderstandings and prejudices caused by its grandiose and extravagant visual presentation — is considered by Yu a critical source of fusion’s beauty.

In addition to “Metacollage,” music is also a critical element of Yu’s exhibition. During the exhibition’s run through June 13, visitors are welcome to ask the gallery staff to play one or more songs on the list.

Over the past two decades, Yu carried out his painting and something similar to music creations simultaneously. The insights gained through music production have influenced and reshaped his understanding of visual art. An accidental composition experience enabled him to obtain a more relaxed creative state. Later, he applied this kind of “following the beats” production method to his paintings, empowering him to experiment more freely with different painting techniques.

The musical influence also brings about a change in dimensions along with composition arrangements. The artist disregarded his preference for large-scale works and turned to combinations of smaller pieces.

“The truly memorable part of a song often tries to repeat its chorus of part of the verses — a small part of the whole song, so I want to try something similar to my paintings,” he explained. “It is an exchange with your inner self, quite like the string quarter, in which players sit in a half-circle, and the strings respond to each other.”

An example of this approach is the three sets of works on paper on the left-side wall by the entrance, composed of a set of overtures, symphonies, and variations with the theme “Alcheringa.” 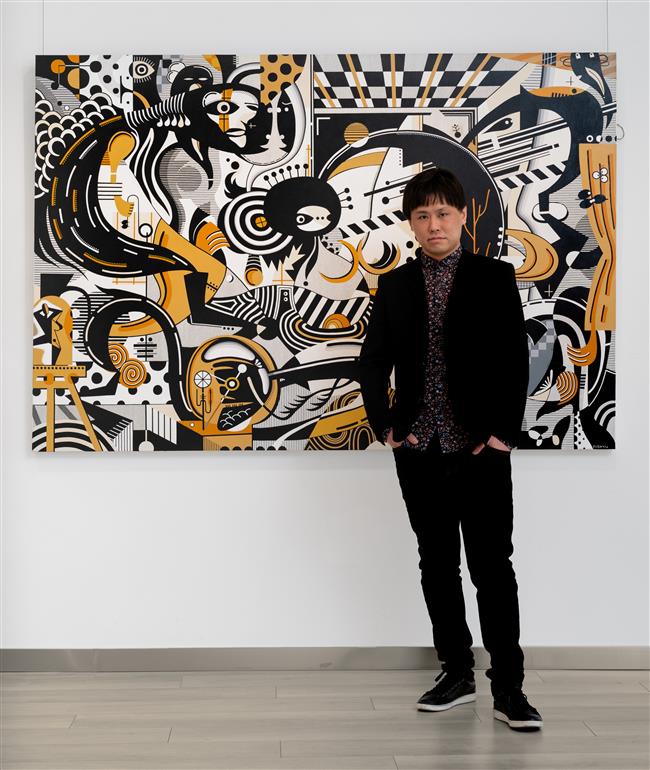 Q: It is said that you formed a band in college. What does music mean to you?

A: I was the lead singer, and the name of our band was “Utopia.” The first song we performed was “Supersonic” by Oasis.

Compared to art, music seems to be more abstract, which gives a deeper dialogue to my inner side. In fact, I don’t think that music and art are contradictory.

My inspirations in music often come out while walking, having a chat with friends or painting on canvas. I don’t think there is any bondage in creation. Perhaps I am a very greedy person who wants to try as much as possible during my life.

Q: What’s the difference in creating artworks during the coronavirus lockdown?

A: Mainly the materials, as I had to use whatever was available. For example, I started to work on paper which I hadn’t done since my university days. And guess what? It made me feel like I had rewound the clock 10 years.

Q: You mentioned that poetry is very important to you and the title of each of your works. Why does that matter?

A: Poetry greatly inspires my artistic path. For me, poetry captures something fleeting yet permanent. Sometimes reading a good poem is superior to reading a novel, because poetry gives us a new way and angle to see this world.

I always remember the experience of buying a tape cassette when I was a little boy. When I hesitated in front of many unfamiliar albums, I often bought the ones with interesting song titles in the track list. Even today, I actually miss the kind of excitement and anticipation of the unknown, which is why I am so keen on the title of each work.

Q: You often try to blur your signature in your work, guiding the viewers to look for it themselves. Is it a visual game?

A: Might be but not completely. Because I think signature is the soul which culminates each work. An ideal signature, for me, is to emerge immediately when you want to find it, but to integrate itself into the whole work when you appreciate the painting.