Tilling and weaving a fabric of life 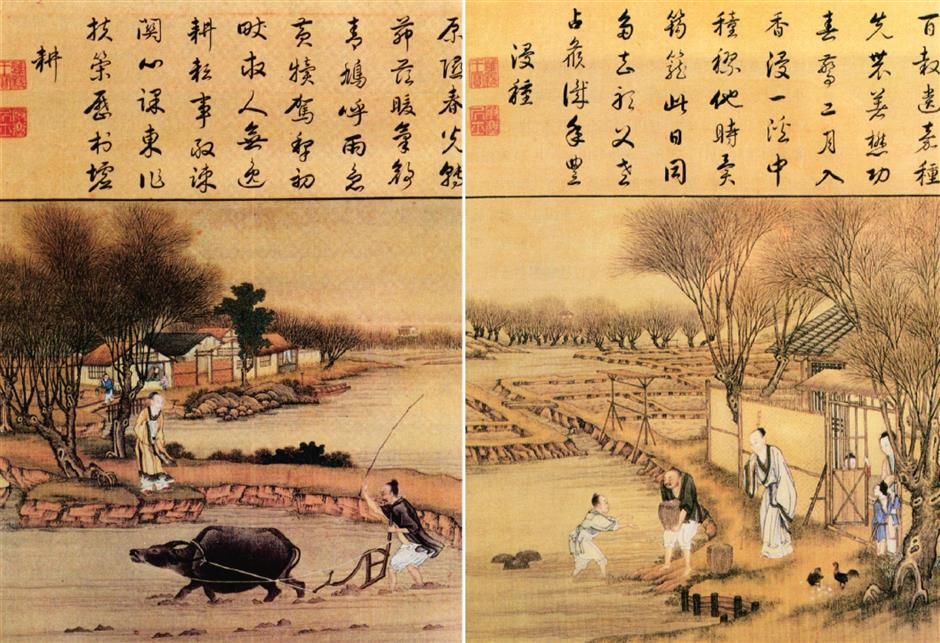 Different from other versions, the main characters such as male farmers and female weavers were created into the images of Yinzhen himself and his wives in his “Tilling and Weaving.”

Agriculture and handcraft industries always played a significant part in the fabric of society, especially in ancient China. Known as the world’s first agricultural popular science painting album, “Gengzhi Tu,” a series of paintings created in the Southern Song Dynasty (1127-1279), reveals all you need to know about the traditional ways of tilling and weaving.

Among the 45 works, 21 of them show steps of grain cultivation while 24 portray the manufacture of silk fabric. In his paintings, men are mainly responsible for agriculture whilst women work on sericulture.

In terms of growing rice, Lou portrayed several scenes of soaking seeds, such as ox-ploughing, weeding, leveling, planting seeds, fertilizing, irrigating the field, reaping the ears of the paddy when they are ripe and golden, piling them up and airing them, threshing, husking, sieving, winnowing, grinding and finally placing them in the storehouse.

There are 24 steps to the weaving process, including bathing the silkworm eggs, feeding larva, larva going through three molts, placing silkworms into different bamboo trays in order to give them more room to grow, men picking mulberry leaves, feeding silkworms, the insects spinning themselves into a silk cocoon, building trellises, putting silkworms on trellises and heating trays, taking cocoons off trellises, storing cocoons in crocks, reeling silk from cocoons, worshipping the Silkworm Goddess, winding silk threads, preparing for warp and weft, weaving, brocading and finally cutting the fabric and folding the clothes.

The album was presented to Emperor Gaozong of Song (1107-87). Adorning the paintings, the emperor invited Lou to the palace. He showed the works to his concubines and asked court painters to copy them. Lou’s “Tilling and Weaving” work was soon on everyone’s lips.

In the Southern Song Dynasty, copies of Lou’s educational scrolls were glued on the walls of all government offices, which aimed to encourage people to do farm work and popularize agricultural knowledge.

People of various dynasties copied or revised it. And the theme was also seen in stone-carvings, wood-carvings and porcelains. Serving as a county magistrate, Lou stayed close to the people. He often went to the farmlands and discussed with local people the techniques used in agriculture, sericulture and weaving.

Lou then depicted the procedures as well as the equipment on canvas. The images provide valuable evidence for later generations of historians.

Lou’s original album is lost but facsimiles remain. One surviving version was created during the reign of Emperor Kangxi (1654-1722).

In 1689, the emperor made a grand tour to consolidate his authority over southern China. During his inspection tour, local scholars presented a collection of their books and paintings to the emperor. Among the collection, the album “Tilling and Weaving” thrilled the emperor and he asked the court painter Jiao Bingzhen to copy it.

Emperor Kangxi wrote a preface for the album, and each painting is accompanied by his seven-character poem.

Compared to Lou’s version, Kangxi’s “Tilling and Weaving” made some changes in content. In the tilling part, he added two stages: waiting for seeds to grow as the seventh step and worshipping gods as the final step.

In the weaving part, the stages of eggs hatching, feeding larva and silkworms’ first molt were removed, while adding the steps of dyeing and tailoring.

Learning from Giuseppe Castiglione, widely known as Lang Shining in China, Jiao adopts the technique of linear perspective in “Tilling and Weaving.”

Emperor Kangxi’s son Yinzhen (1678-1735) also asked court painters to paint the same work before ascending to the throne. Different from other versions, the main characters such as male farmers and female weavers were created into the images of Yinzhen himself and his wives in his “Tilling and Weaving.”

During the reign of Emperor Kangxi, the struggle between various princes over the inheritance of the throne continued for a long time.

Presenting his version of “Tilling and Weaving,” Yinzhen intended to show that he paid attention to agriculture and had no interest in the contest of the throne but instead pursue an idyllic life.

The qualities were exactly what his father Kangxi believed a successor should have. Yinzhen ascended to the throne and became known as Emperor Yongzheng in 1722.

Both Emperor Kangxi’s version and Yinzhen’s version of “Tilling and Weaving” are on display in the Palace Museum in Beijing.

﻿
Special Reports
﻿
61864
,
Tilling and weaving a fabric of life
For precious art in poor health, the doctor is in
Metacollage: where East and West intertwine
Iconic red-brick facade reminiscent of former glory of innovative hospital in city
Women wear their hearts on their sleeves
Only surviving 'safe' held empires' top secrets
Chinese filmmaker gets teeth into new series
Art gallery weaves a tale of cultural history
Gritty documentary focuses on miners with black lung disease
Meteorite hunters in the quest for space debris
EXPLORE SHINE