Fresco opens window into past 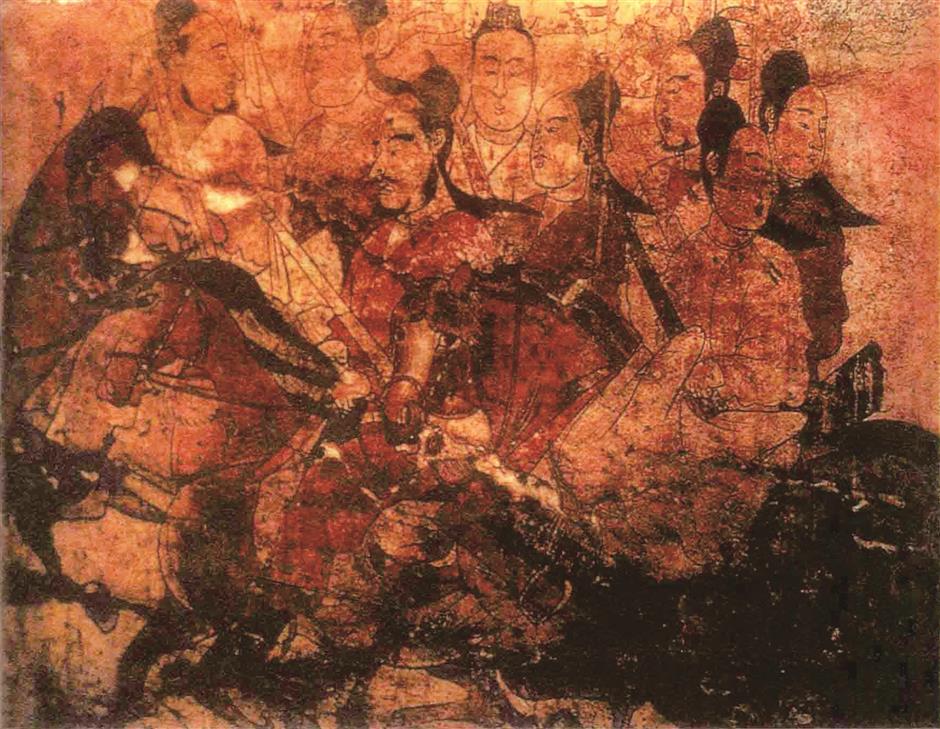 A fresco discovered in a tomb in Wangguo Village, in Taiyuan of Shanxi Province, has opened an intriguing window into the history of the Northern Qi Dynasty (AD 550-577). The colorful murals, which show Lou Rui’s extravagant life, occupied over 400 square meters in total but only around 200-square-meter murals remain.

A fresco discovered in a tomb in Wangguo Village, in Taiyuan of Shanxi Province, has opened an intriguing window into the history of the Northern Qi Dynasty (AD 550-577).

The Northern Qi lasted only 27 years, and there was very little art, from that short epoch in Chinese history, to reveal the social, political or cultural time — until recently.

The fresco was discovered accidently by an archeological team tasked with uncovering the tomb of Shu Yu of Tang near the village in 1979. Shu Yu was the founder of the State of Tang during the early Zhou Dynasty (1046-256 BC).

His son renamed the state Jin. However, after digging for several days, they realized that the mound was fake and there was nothing underground.

An elderly man of Wangguo Village came to the disappointed archeologists and said that there was a huge mound in their farmland and he believed it was the tomb of Hulu Jin. Hulu was a famous general of the Northern Dynasty (AD 386-581).

Back in 1953, a well-sinking team went to Wangguo Village to excavate a well but failed to find water underground. However, while drilling the exploratory well, the team discovered a hole excavated by ancient grave robbers. Some of the brave teammates crawled into the hole and faintly saw some colors on the walls. But they gave up their dig and reported the finding to the local government.

In autumn of 1971, locals flattened this mound in order to extend their farmland. They were aware of the buried treasure beneath their feet and planned a dig, until the local department of cultural relics administration stepped in to prevent them. It wasn’t until April 1979 that an archeological team went to the village to do some research on the area and the tomb excavation project was officially launched.

To reduce damage to the relics, the archeologists decided to enter the grave through the original hole dug by the ancient grave robbers. The hole was about 1 meter in diameter.

They found the grave was filled with water. They had to pump it before they witnessed the exquisite murals. A tombstone was also unearthed and the identity of the occupant was not Hulu Jin but Lou Rui (AD 531-570), who was Prince Dong’an of the Northern Qi Dynasty.

The aristocrat was the nephew of Lou Zhaojun, who was empress dowager of the Norther Qi. He held the highest official governing ranking in today’s Taiyuan, which was the second most prosperous city in the dynasty.

The noble status of Lou implied there would be an abundance of treasures. The tomb had been robbed of antiquity, but archeologists still unearthed more than 800 artifacts, including pottery figurines and porcelains, during the three-year excavation.

The colorful murals, which show Lou’s extravagant life, occupied over 400 square meters in total but only around 200-square-meter murals remain. The murals sprawling on two sides of the slope aisle toward the tomb are well preserved. They feature the outing and return of Lou.

He is accompanied by musicians, armed soldiers, a caravan with muscled camels and over 200 horses of various postures. Some horses gallop, others seem to be scared and balk, while one of them poops while running.

The Northern Qi Dynasty strongly asserted their Xianbei ethnic cultural identity. The Xianbei were one of the major nomadic groups that lived in and around today’s northern China.

For nomadic people, horses were vital in their daily lives. The animal not only helped people do physical labor but was used in warfare. More importantly, a horse was a symbol of wealth for the Xianbei.

The murals on the walls of the passage, leading to the main chamber, illustrate the afterlife of Lou.

The chamber door features a qinglong, or azure dragon, and baihu, or white tiger. The two holy creatures represent the West and East respectively. The ceiling of the chamber reveals a mural painting of astrology.

Red, yellow, cyan, brown and green-colors reveal the murals’ splendor. According to historical experts, painters drew an outline before filling in colors. However, the identity of the painters is unknown. But based on the skillful painting techniques, experts believe that one of them was Yang Zihua, who was a famous painter who excelled in portraying horses.

The murals are currently exhibited at Shanxi Museum.