Lacquer art is a craft developed in China known for its difficulty and beauty with a history that dates back more than 7,000 years. It involves dauntingly precise work repeated many times over.

Wensen Qi, a French artist who works and lives in China, believes lacquer chose him by fate. He is surnamed Qi to resemble the pronunciation of lacquer in Chinese.

His solo exhibition, “Wandering,” which features 15 pieces of his lacquerware created over the past year, is on display at Dumonteil Shanghai through August 29.

Covering his latest experimentations with lacquer art and composite materials, the exhibition attempts to reflect the rich material-based experience and touches embedded in his simple aesthetics.

Born Vincent Cazeneuve in 1977 in Toulouse, France, Qi completed his studies at Ecole des Metiers d’Art in Revel before opening his first studio that specialized in restoring Western and Asian lacquerwares.

It was during this time he was introduced to Asian lacquer, which aroused great interest. In 2009, Qi moved to Chongqing where the world’s best lacquer can be found in abundance.

One of his favorite pieces in the exhibition, “Untitled (WQ1070),” features seven gold, foil-covered lacquer pieces arranged in a pattern of three rows and three columns, connected by lacquer pieces inlaid with eggshells and engraved with abstract symbols.

Initially, visitors may see it as an ancient totem, but for Qi these symbols have no cultural or historical significance. Instead, they merely carry abstract beauty.

“In my work, I try to disconnect any historical context,” he said. “I am planning to move in with lacquer farmers in the deep forest of the Chongqing suburbs to further my research.

“When creating my works, I often think of them, their trees, their homes and their forest. My work is a bit like creating fossils.”

“Humans have lost touch with materials, which becomes a big problem, but I don’t think art can do much,” he said. “However I want to feel vibrant materials, which opens another door for me to see the world.”

To Qi, lacquer is a powerful allergen, a natural defense for trees.

“Traditionally, it is said you must face seven major allergic reactions to become immune,” he said.

The artist is also fascinated with integrating unusual materials into lacquer art. For the exhibition, his creations include more than 20 different materials, ranging from ramie fabric, gold leaves and old rice bags to iron powder and bamboo.

In “Untitled (WQ1080),” one plane alone is decorated with a combination of six materials, including lacquer, wood, bamboo, oxidized silver leaves, gold leaves and graphite. Using such a diverse range of materials gives it a multi-dimensional feel.

As Qi sees it, all materials are the same other than temperament and style. The textures of these materials are translated into visual works with a series of layering, grinding and polishing.

In fact, old rice bags have been a common theme in his creations and the most commonly used material.

“This rice bag has traveled around the country, so to speak; a wandering journey completed in the human world.” 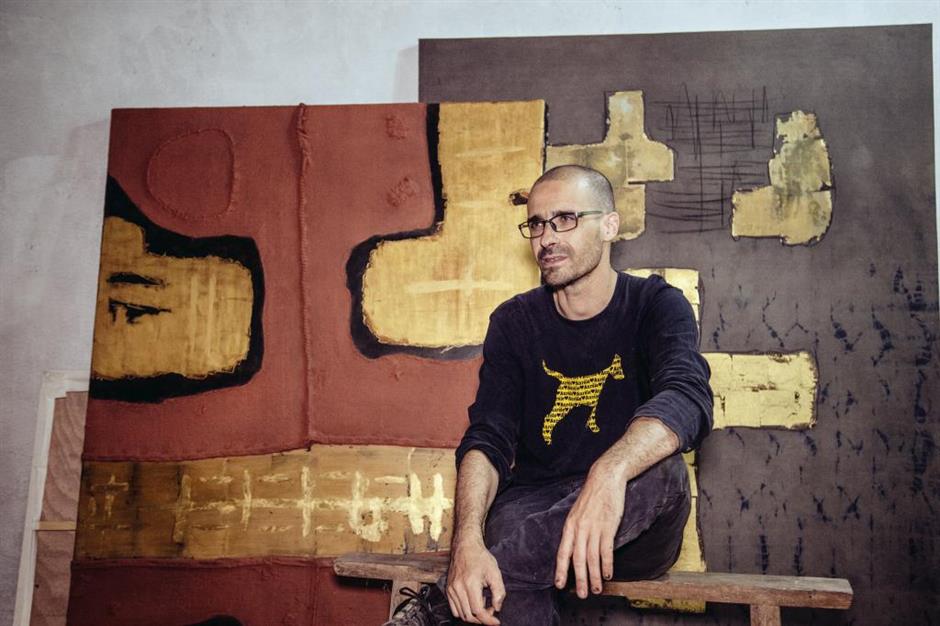 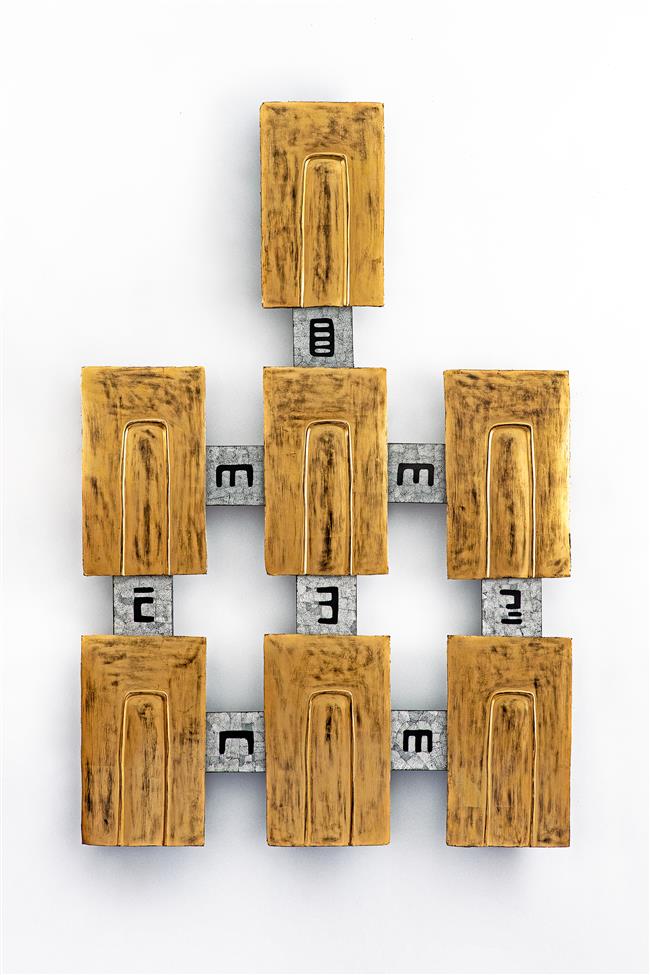