Spending eight years on a canvas sounds like the work of a masochist, especially if this work is still unfinished when it begins a tour around the country.

The 30-meter-long work, “Stories of Minguo: Liao Zhenwu’s Works,” unfolding a panoramic view of the Republic of China (1912-1949), is on display at Shanghai Marie’s Art Museum through September 17.

“I asked myself countless times, why would I create such a large-scale oil work?” Liao said. “What’s the meaning or value of it?”

The Republic of China was established in 1912, replacing the Qing Dynasty and ending more than 2,000 years of feudal rule. This period ushered in dramatic changes in culture, art and society from which emerged a cluster of heavyweight, modern intellectuals, artists and politicians.

“I was enamored of this special historical period,” Liao said. “My intention was simple — I wanted to translate written historical materials into a visualized context with my imagination.”

Since 2011, Liao delved into a sea of materials to search for inspiration.

“It is a rather systematic study of the architectural and sociocultural factors of an era,” Liao said. “The mission was so challenging that I nearly gave up.”

Suffering both back pain and insurmountable painting difficulties, Liao took a break in 2015. After much consideration, he decided to further his studies for a year in the oil department at China Central Academy of Fine Arts.

“Thanks to that one year of study, I solved many problems in my creations,” he said. “It enabled me to open a new vision in the application of oil.”

The work reflects the artist’s profound thinking and serious attitude toward history.

He precisely depicts a variety of transportation modes common during the 30-year development of the Republic of China, ranging from carriages and rickshaws to steam trains and sedans.

The seemingly blurred background coupled with the use of semi-realistic and semi-abstract images balance the senses of reality and illusion.

“Every detail should be considered, such as hairstyles, clothes and building designs,” Liao said. “This provides a glimpse into how Chinese society evolved in the first half of the 20th century.”

“The spirit of the work unwittingly echoes the ongoing status of modernity,” said Xia Kejun, the exhibition’s curator. “Indeed, how can a chapter of history be stagnant with no new discoveries?” 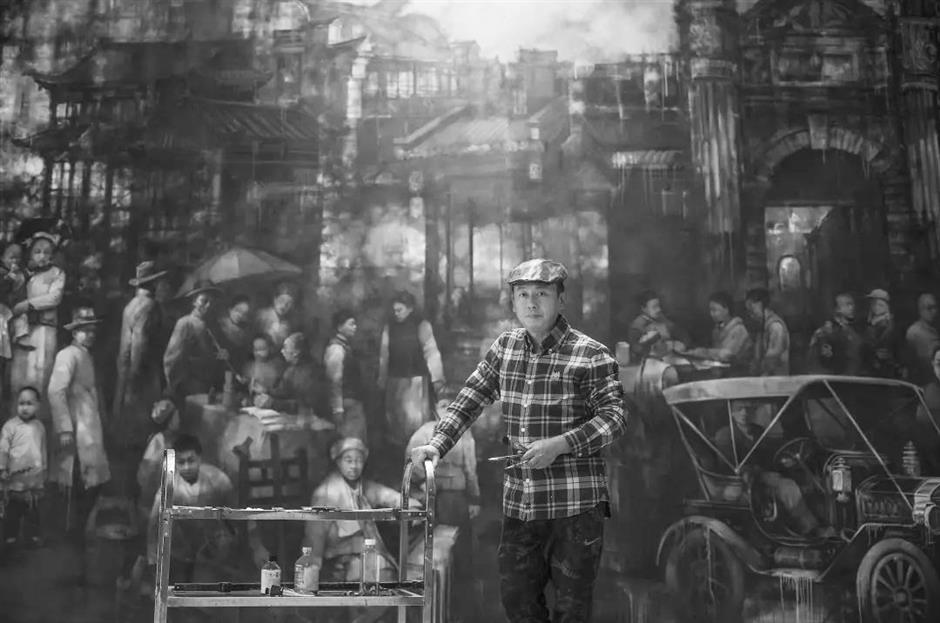 Artist Liao Zhenwu poses in front of his unfinished work “Stories of Minguo.”