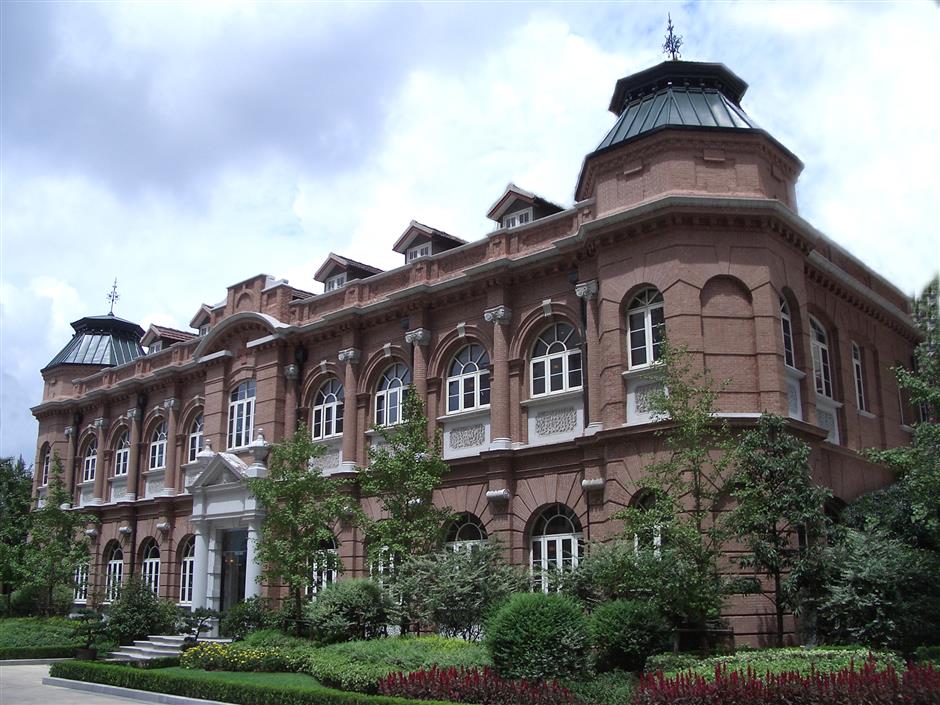 The “Harvard Building,” a brick-and-wood structure, which has been used as a medical ward, was constructed upon the founding of the hospital.

The architectural scene mirrors the history of the century-old hospital. The predecessor of Huashan Hospital was the Chinese Red Cross General Hospital, the first Chinese-run Western hospital in Shanghai.

“It was Shen Dunhe who among others founded Shanghai International Red Cross Society in 1904 and his application for founding a red cross hospital was granted by the Qing government in 1907. That kicked off the history of Huashan Hospital,” former Huashan Hospital president Xu Jianguang wrote in an article in the now-defunct Oriental Morning Post on December 21, 2006.

An influential official and successful merchant of the late Qing Dynasty, Shen had studied law and politics at Cambridge University in the United Kingdom and took many important prominent positions after returning to China.

According to Huashan Hospital archives, Shen purchased a 9,338-square-meter plot of land at No. 7 Siccawei Road (now Huashan Road) for building the hospital in 1909. The construction was completed in 1910. A file photo of the “Harvard Building”

In 1913, the hospital signed a five-year contract with Harvard University for founding the Harvard Medical School at Shanghai. In 1921, the hospital was fully operated by Chinese  nationals with Dr. Niu Huilin (Way-ling New) as its president.

In 1928, the hospital became a teaching hospital affiliated to the College of Medicine of the National Central University, which later became Shanghai Medical College. It was under the charge of Dr. Yan Fuqing (F. C. Yen).

At the beginning, the hospital merely had 50 beds. As a Red Cross hospital, it charged only a clinic fee and poor patients were treated free of charge.

“To begin with, the hospital was small in size and lacking medical equipment. But as most Western hospitals in old Shanghai were founded by churches, such a hospital built with Chinese funds was significant,” said Lu Ming, a medical historian from Shanghai No. 4 People’s Hospital.

The “Harvard Building,” also called “the Red Cross Old Building,” is featured on the hospital logo today and regarded as a symbol of the famous medical institution. A nameplate in front of the building is engraved with the spirit of the Red Cross Society — “humanity, fraternity and dedication.”

The building, a brick-and-wood structure, which has been used as a medical ward, was constructed upon the founding of the hospital. The red-brick facade is vividly graced by classic architectural details, from white-framed arched windows with key stones, Ionic columns between windows and small dormer windows over the top. The entrance is flanked with two Doric columns and topped by a grand gable. The facade is half shaded by green trees. 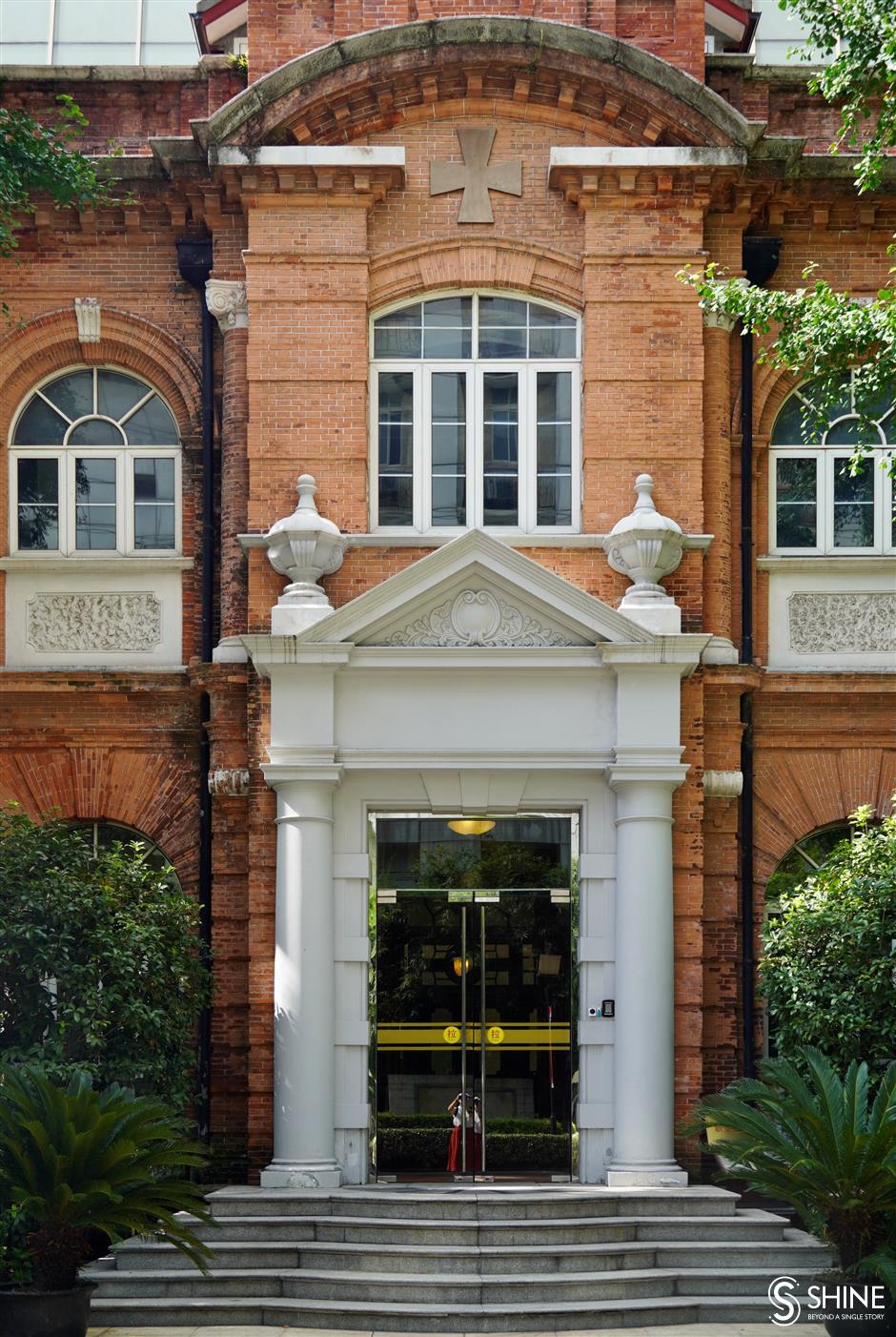 The entrance is flanked with two Doric columns and topped by a grand gable.

The structure is widely called “Harvard Building” due to the “Harvard Medical School at Shanghai” project.
According to an article, named “Medical Education in Shanghai” in the Chinese Recorder on November 1, 1915, there were 13 instructors with five classes and about 25 students for this project in the academic year.

The purposes of this institution was “to give instruction in medicine and surgery to young men of the Orient, to give training in preventive medicine and public health to graduates of medicine desiring to become public health officers and to develop departments of research, where the disease of China and the Orient may be studied.” And Shanghai was recommended as a location for the institution for the interest in medical work in the city, the number of English-speaking students about Shanghai as a center, the ready touch of the city with other Oriental ports and the efficient organization of the Shanghai Department of Public Health.

“Under the terms of an agreement with the Red Cross Society of China, the school occupies the large and well-equipped school buildings, hospital and dormitories of the society situated at No. 7 Siccawei Road. In the main building there are fully equipped laboratories for class work in physics, chemistry, physiology, bio-chemistry and bacteriology, etc., a large research laboratory and a well equipped X-ray room. Classrooms, a reading room and a library were in the same building. The second floor of the main building is made up of private wards and contains an excellent operating suite, where surgical clinics are held,” the 1915 report revealed.

During a renovation years ago, the two-story “Harvard Building” added another floor. The interior is now decorated in a classic Western style. The walls of the ground floor are graced by portraits of the hospital’s presidents and lifetime tenured professors. 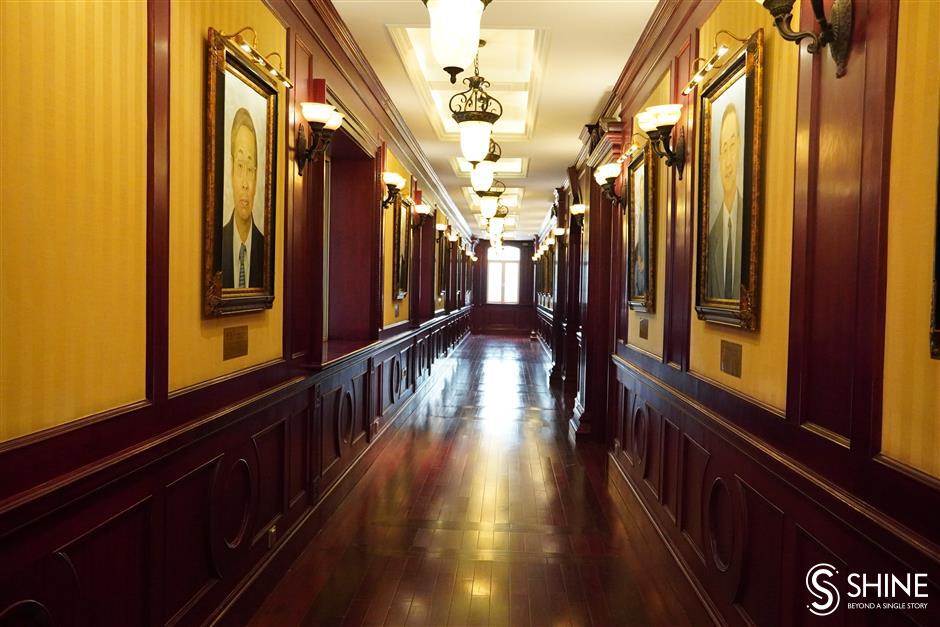 The interior is now decorated in a classic Western style. The walls of the ground floor are graced by portraits of the hospital’s presidents and lifetime tenured professors.

The two ground floors are used as a hospital history museum and conference rooms. The top floor serves as offices for lifetime professors.

“We estimated that Huashan Hospital has treated 40 million patients within a century. This amazing figure is written with ‘humanity’ for 100 years. Today it is not a large hospital in terms of the size, but it’s been a hospital with pride in terms of medical skills. We have maintained the same ‘circle center’ 100 years ago, to adhere to the spirit of the ‘Red Cross old building,’” former president Xu said.

Huashan Hospital sits on a prominent location between Huashan Road and Wulumuqi Road. The not-so-big hospital compound has a 26,680-square-meter Chinese garden, which is elegantly designed and open to patients.

“The garden in the west of Huashan Hospital is widely called Zhou Family Garden because it belonged to Chinese merchant Zhou Chunqin before 1945. The garden named ‘Chun Lu’ features flowers and wood of the four seasons, a small bridge, flowing water and pavilions. The lotus pond was planted with water chestnuts and lotus roots. The Zhou family spent summer days here,” Song Luxia, a historian/writer, writes in her book “The Prominent Shanghai Families.”

The garden was later sold to the family of another Shanghai tycoon Yu Yaqing. It was Dr. Yan Fuqing who tried to get this garden for the hospital to use.

The Zhou Family Garden features flowers and wood of the four seasons, a small bridge, flowing water and pavilions.

“Huashan Hospital has been a golden brand for the China Red Cross Society. The special skills of the hospital can be described as ‘big head, thick skin and long hand,’ which means they have a superb nerve unit, dermatology unit and unit of hand surgery,” said Yang Zheng, a medical historian from Shanghai Zhongshan Hospital.

Today Huashan Hospital has developed into a large comprehensive hospital with 2,092 beds. As a designated medical institution of 10 foreign consulates in Shanghai, it has received more than 600,000 foreign patients from more than 100 countries.

“During the Japan earthquake in 1923, the then president Dr. New led a China Red Cross medical team to aid Japan. It was China’s first overseas medical aid,” he added.

Huashan Hospital’s most recent mission was to treat COVIC-19 patients in Hubei Province and in Shanghai. On January 24 the red-brick building witnessed the departure of Huashan Hospital’s first medical team to Wuhan.

Back in Shanghai, professor Zhang Wenhong, director of Huashan Hospital’s Department of Infectious Diseases, headed the city’s medical treatment and prevention of epidemics. His expertise of introducing COVIC-19 epidemic knowledge in a simple and often humorous way has relieved many citizens’ fears.

Recently the hospital showcased the names of its 273 medical workers who joined the Wuhan mission on a huge billboard right in front of the red-brick building. 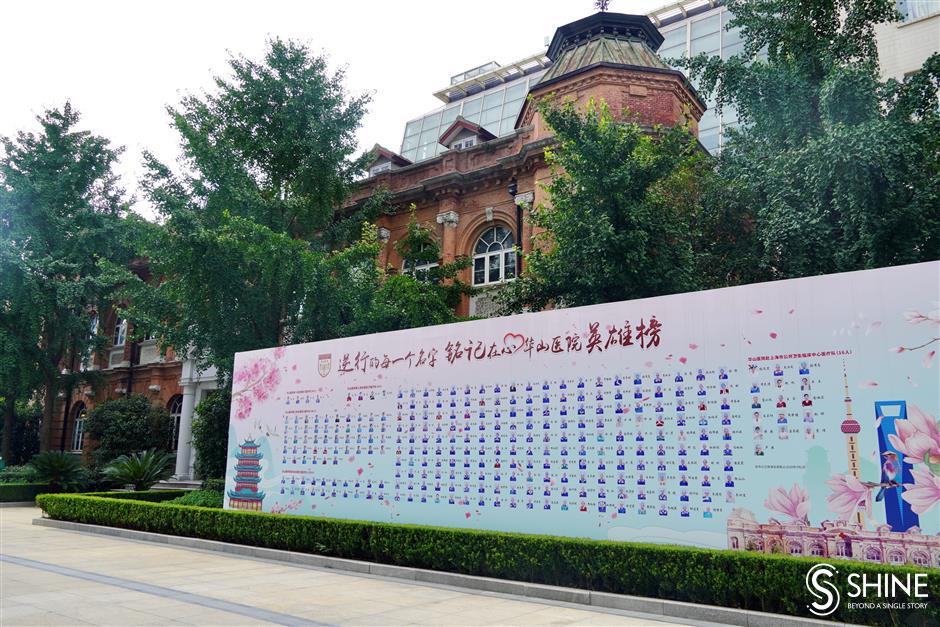 Recently the hospital proudly showcased the names of its 273 medical workers, who joined the Wuhan mission, on a huge billboard right in front of the “Harvard Building.”

Yesterday: Chinese Red Cross General Hospital
Today: Huashan Hospital, Fudan University
Architectural style: classic style
Built in: 1910
Address: 12 Wulumuqi Road M.
Tips: For now, you are required to show the health code to enter the hospital. The “Harvard Building” is not open to the public but the facade can be admired. The garden is open and it’s really nice for a walk.