A lasting legacy of when Shanghai gave refuge to the Jews

The gray-hued Building No. 10 of the Eye & ENT Hospital of Fudan University, on Fenyang Road was the Shanghai Jewish hospital in the 1940s. 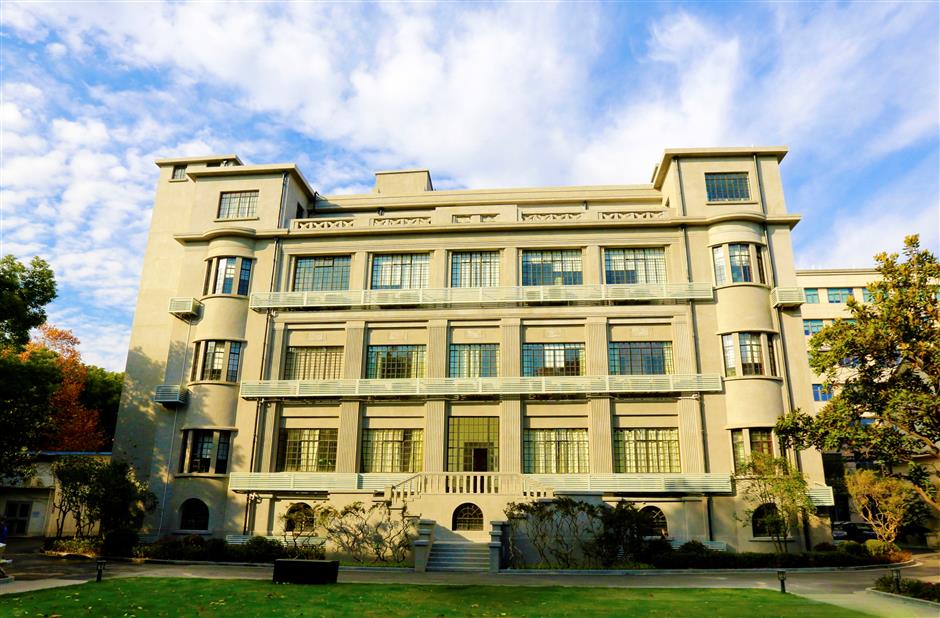 The gray-hued building was the Shanghai Jewish hospital in the 1940s. 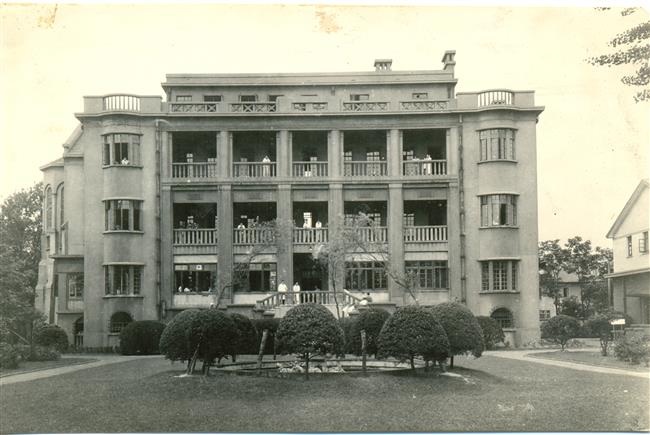 A file photo of the Shanghai Jewish Hospital

According to Shanghai local annals, in 1929, the city’s Sephardie Jews founded the Shanghai lodge of B’nai B’rith, a religious organization to conduct charity and relief work in the Jewish community with D. E. J. Abraham as the leader. They opened the B’nai B’rith Polyclinic and Hospital on Rue Bourgeat (today’s Changle Road) in February 1934 with funds donated by the prominent Jewish businessman Elly Kadoorie. Dr I. M. Steinman served as the director.

After the outbreak of World War II, the Russian Jewish community in the city took over the clinic in 1942, moved it to the current site on Route Pichon (now Fenyang Road) and expanded it to become the Shanghai Jewish Hospital.

According to Shanghai Jewish Hospital’s former manager Israel Kipen’s autobiography “A Life to Live”, the new hospital building on Route Pichon belonged to the Catholic Church and was occupied by the Polish diplomatic mission which vacated it as a result of the war. The Jewish community took out a lease and established a hospital with 60 beds, an operating theater and other support facilities.

Today, the hospital still preserves copies of original drawings of the gray building which was designed in 1931 by Goldenstaedt.

In the new edition of “The Evolution of Shanghai Architecture in Modern Times” published months ago, Tongji University professor Zheng Shiling praised Goldenstaedt as “the most prolific Russian architect in old Shanghai” who won an honorary prize of the design competition for Sun Yat-sen’s Mausoleum in Nanjing in 1925.

Most of Livin’s works were Art Deco “with lines and patterns in the part,” Professor Zheng writes in the book.

The gray building on Route Pichon was originally built for “Missions Etrangeres de Paris,” a Catholic church founded in Paris in 1659. 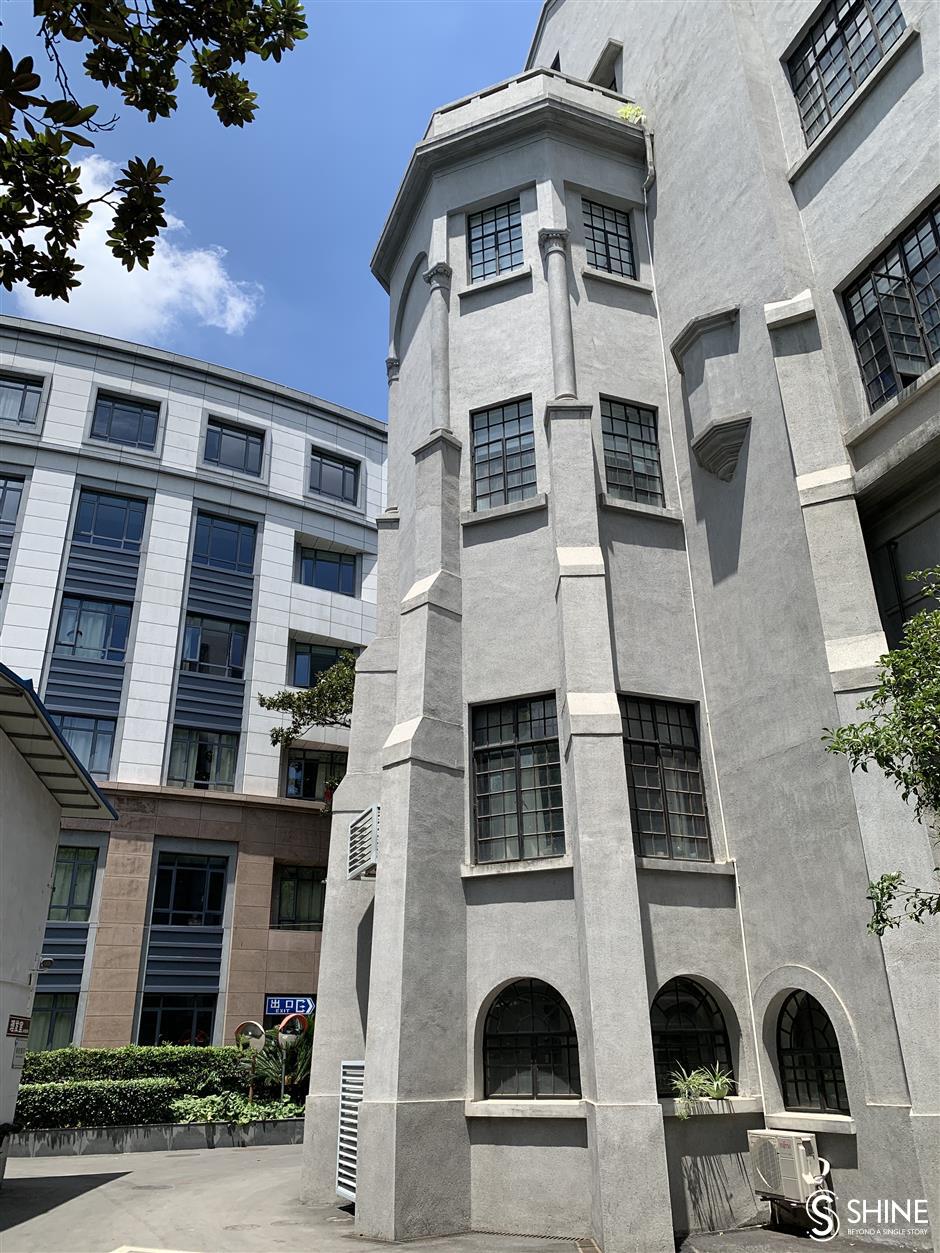 The former chapel of the gray building which was designed in 1931 for the Catholic Church. The architect’s drawing of the former chapel of the building

It was a modern, functional building of three major floors.

According to the original drawings for the Catholic church, the ground floor featured reception room, office, billiards room, parlor, dining room and pantry while the first floor housed a library, chapel and bedrooms.

The building had an attic and a water tower in a large garden.

When the building was converted into the hospital, the large garden was retained. 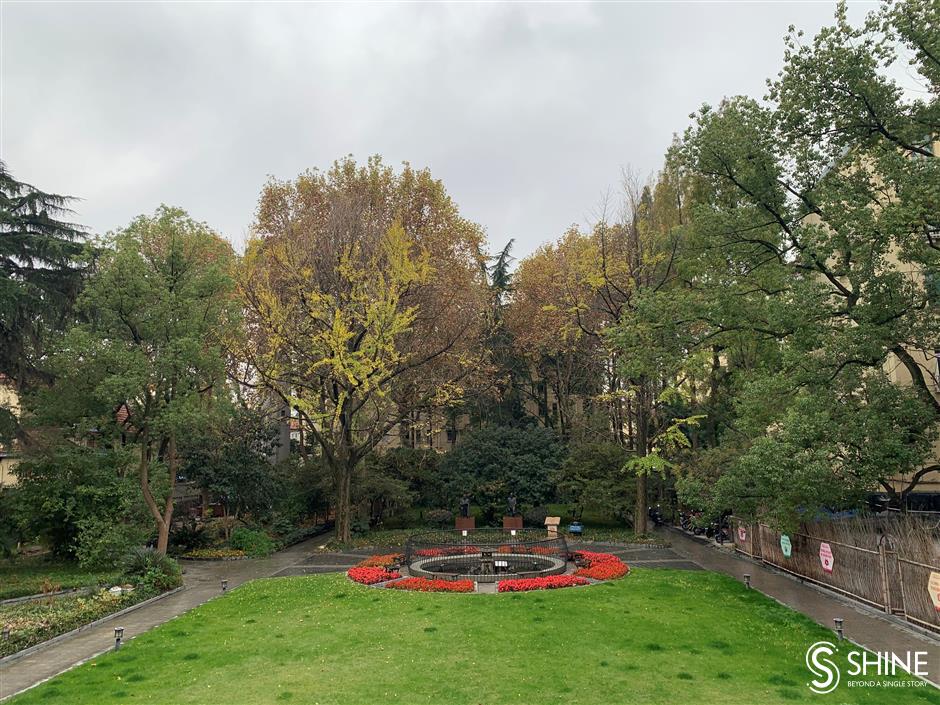 The building is still fronted with the spacious lush garden today.

The main building was surrounded by beautiful gardens, and the environment was very elegant.

“The hospital is led by a board of directors composed of honorary directors. The chairman is Isak Kirilovich Kagan originally from Riga. Vice Chairman Simion Liberman was formerly a professional accountant. Dr Steinman, a Russian Jew with Polish ancestry, served as the director. Most of the medical staff in the hospital were Russian or German Jews,” Professor Wang says.

With this new job in 1942, Israel Kipen, a young refugee arriving in Shanghai in 1941 from Poland, was provided with a room, full board and some payment in cash.

At that time, people working in hospitals with quarters on the premises were exempted from the general regulations for Jewish refugees by the Japanese and permitted to remain at their place of work.

“When most people moved into the restricted and overcrowded conditions of Hong-Kew (Hongkou), I moved to the gardens of Route Pichon, settled into my room and threw myself into the new task with enthusiasm,” Kipen writes in the autobiography.

According to his narration, the doctors who worked at the hospital represented a microcosm of European settlement in Shanghai.

“A number of outstanding German Jewish surgeons operated there. The name of Dr Marcuse comes readily to mind. He was a short man, always in good humor and forever whistling a tune from the classics. Being a musician of note and an orchestral conductor, he gave the impression that music was his first love while surgery served as a means of making a living. Another excellent surgeon was Dr Heilborn, tall, thin, taciturn and withdrawn. He never spoke above a whisper but he had the staff hanging on to his every word and responding to every twitch of a muscle” he recalls. 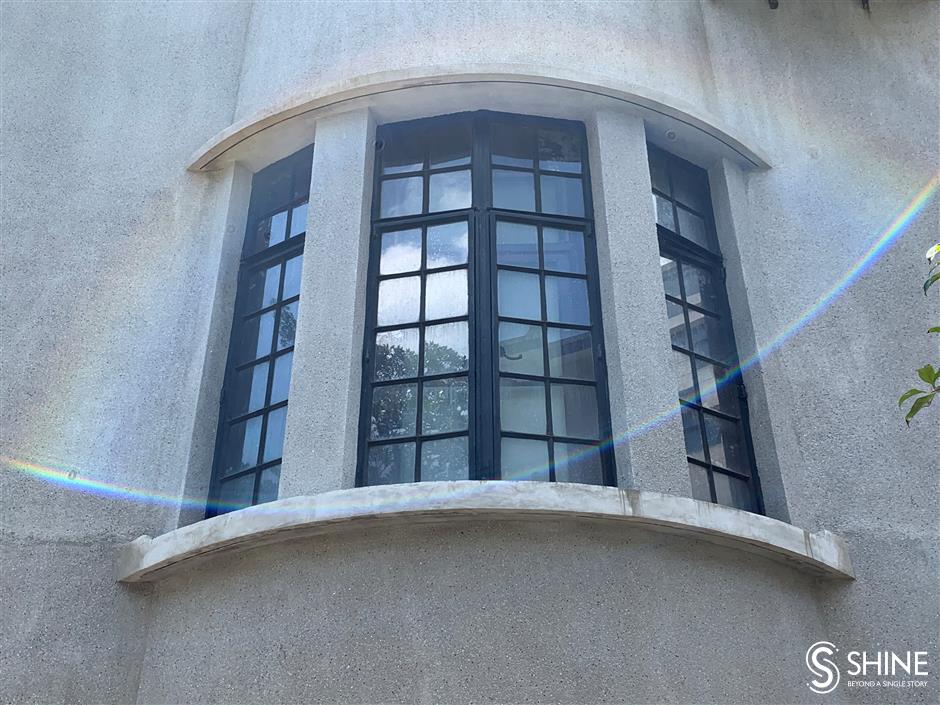 A curved window of the building

Kipen outlined the reasons for establishing a Jewish hospital.

“For one, the general Shanghai Hospital was far from the French Concession where the Jews lived. The difference in standards of living between Europeans and Chinese was another factor. In addition, a considerable number of Jewish families could not afford medical or hospital care; consequently, a hospital was needed which could waive feeds for the indigent. At bottom, perhaps, was the whole concept of communal self-help that gave impetus to those who brought the hospital and other service institutions into being,” he writes.

“The Jewish people in Shanghai also established a research institute to research on the prevention of skin disease for Zhongshan Hospital and sponsored medical educator Yan Fuqing to found Shanghai’s first chest hospital — Chengzhong Hospital. During World War II, Jewish people in Shanghai set up clinics in every ghetto and opened three refugee hospitals. Though these clinics and hospitals for refugees were poorly equipped, the doctors worked enthusiastically. There were few pandemics in the crammed ghettos,” Professor Wang adds.

In 1952, the hospital became the Shanghai Eye and ENT Hospital, Shanghai Medical College and today it’s attached to the Fudan University. After changes over the years, it has developed to be one of China’s leading hospitals that integrates medical care, education, and research, providing patient care for the health of eye, ear, nose, throat, head, and neck, with more than 1,400 employees. In addition to the Fenyang Road site, the hospital has two branches on Baoqing Road in Xuhui District and on Jiangyue Road in Minhang District.

The gray building is now used for administration.

The building is still fronted with the spacious lush garden, graced by a tall, historic water tower and statues of Eye and ENT professors Hu Maolian and Guo Bingkuan, early founders of the hospital. 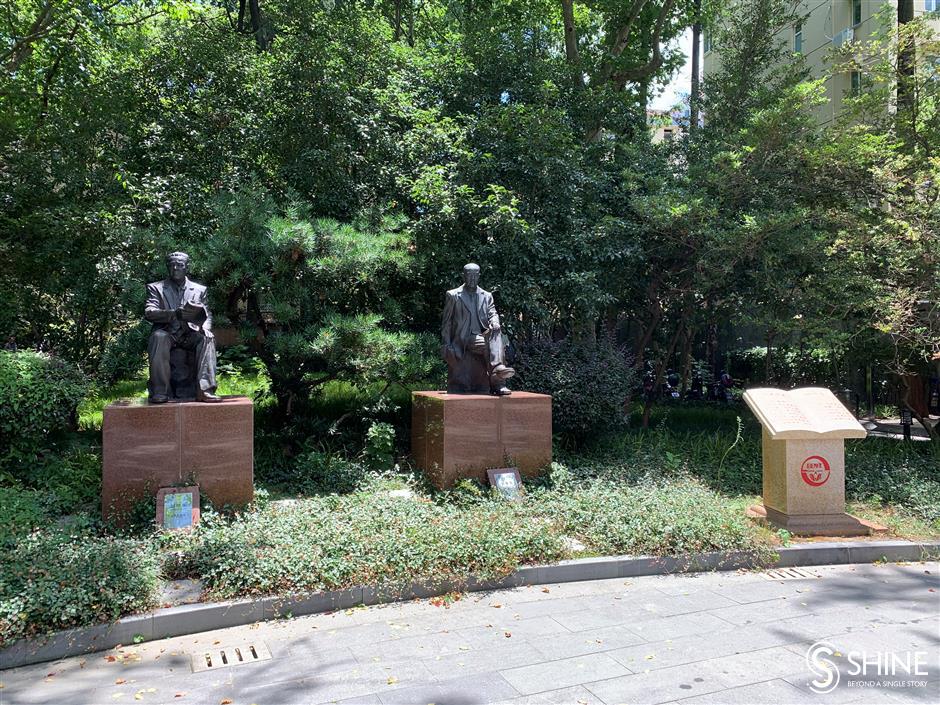 It’s also one of the city’s major Jewish sites along with Sassoon House on the Bund, the Hardoon Building on Nanjing Road and several surviving synagogues.

According to a Wenhui Daily news report published on April 23, 1994, Shanghai invited former Jewish refugees to revisit the city. During the event, the Jewish people visited many synagogues, clubs, and chambers as well as the hospital.

A mission to help all, no matter who

The B’nai:B’rith Polyclinic and Hospital, founded by the Shanghai Lodge in 1933, has been rendering medical assistance and, where needed helpful advice, to Shanghai’s local poor without any discrimination whatsover, for eight years. The hospital itself possesses a very unostentatious entrance on Rue Bourgeat but inside there is silent, intense activity as doctors and nurses seek to alleviate pain and restore good health to the sick and the weak. The dental room, the surgical room where minor operations are performed, and the pharmaceutical and electro-therapy departments are equal to those of any first-class hospital, although on a smaller scale. One speciality and a boon to those, whose religion will not permit them to partake of any ordinary food, is the Kosher diet which is prepared by a Jewish cook.

Dr I.M. Steinman, who is the medical superintendent, has devoted his time and knowledge to the hospital for the last seven years and has continued enthusiasm and cooperation has contributed in no small way, to the steady progress and smooth running of this institution. There is a staff of qualified specialists including Dr A. Korosi, eye, nose and throat; Dr A.M. Peisahoff, skin; Dr A. Mandel, nervous and mental; Dr T. Kunfi, midwifery and gynecology; Dr L. Karpel, lung diseases; and Dr M. Madorsky, internal diseases.

During the year 1940, 15,635 visits were made by out-patients to the Polyclinic, an increase of 637 visits over the previous year, 35 per cent of these visits were by non-Jewish patients. Visits to the dental clinic showed an increase over the previous year of 140, the total for 1940 being 3,460. In the hospital there was also a substantial increase, 268 patients were taken care of, making a total of 4,778 days, which is 767 days more than the year before. The hospital beds were practically never empty. Not only in the past year, but in each year since the polyclinic has been opened, there has been decided increase in the number of patients treated.