A lake, a creek and a solo exhibition at a tycoon's ancient villa

In his practice, Wang, 41, uses systems that operate on a global scale as media for art: climate change, species distribution, resource allocation and the global economy.

For this project, he has created a series of works that look to the natural and cultural heritage of Taihu Lake, or Lake Tai, region in Wuxi City of neighboring Jiangsu Province, and engage the history of Chinese landscape arts.

The Taihu region is home to many of China's most celebrated historic gardens. It is a spiritual center for Chinese landscape traditions that celebrate the harmonious relationship between humans and the natural world.

This connection has changed dramatically in recent times, as revealed by global phenomena like climate change, mass extinction and the extraction of natural resources at an unprecedented scale. The Taihu area is a testament to this radical transformation. From the late 1990s, algal blooms turned the lake's transparent waters green, but intensive remediation efforts have largely cleared the waters in the past few years.

The lake is connected to Shanghai and the sea by Suzhou Creek, a river that passes through the city's center and forms one of China's most vital water routes.

The history of this waterway is linked to the personal destiny of the former owner of Rong Zhai, the successful entrepreneur, Rong Zongjing. Born in Wuxi, on the shores of Taihu Lake, he established factories and mills along Suzhou Creek. 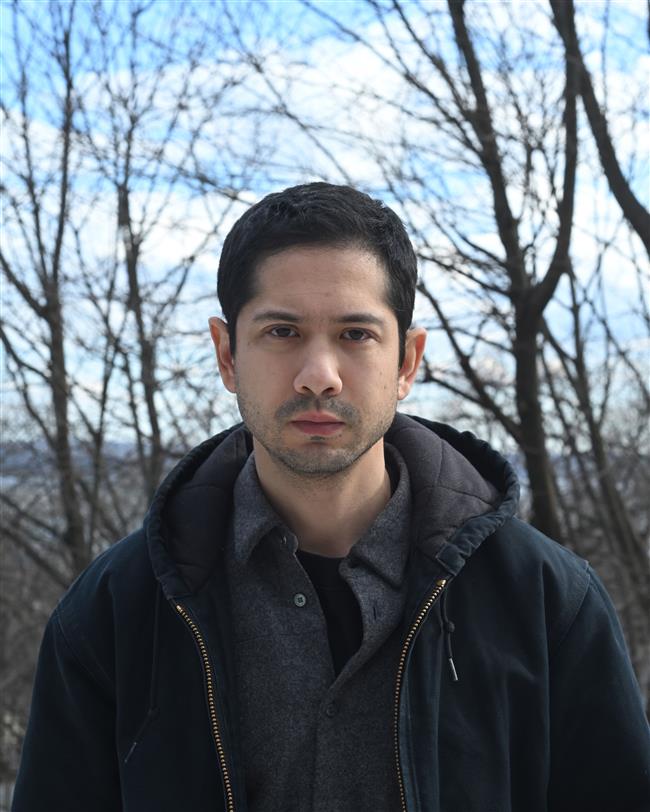 "During my visit to Rong Zhai last year, I saw the stained-glass panels in the Sun Room that show the lake and Suzhou Creek as they were in Rong's time," Wang recalled. "I immediately thought about the watery connections between the Taihu Lake and Shanghai."

"Along the creek, Rong maintained factories and warehouses. I saw the story of Rong (and his business) as part of the deep historical, cultural, economic and hydrological relations that tie Taihu Lake to Shanghai," the artist said.

The large figured panels on the Sun Room windows in Rong Zhai greatly inspired Wang to develop this artistic project. They preserve the memory of a distant past as they depict legendary episodes in the life of this businessman, including scenes of Taihu Lake and Suzhou Creek.

In the exhibition, Wang presents a series of sculptures and installations on the first floor and in the back garden. 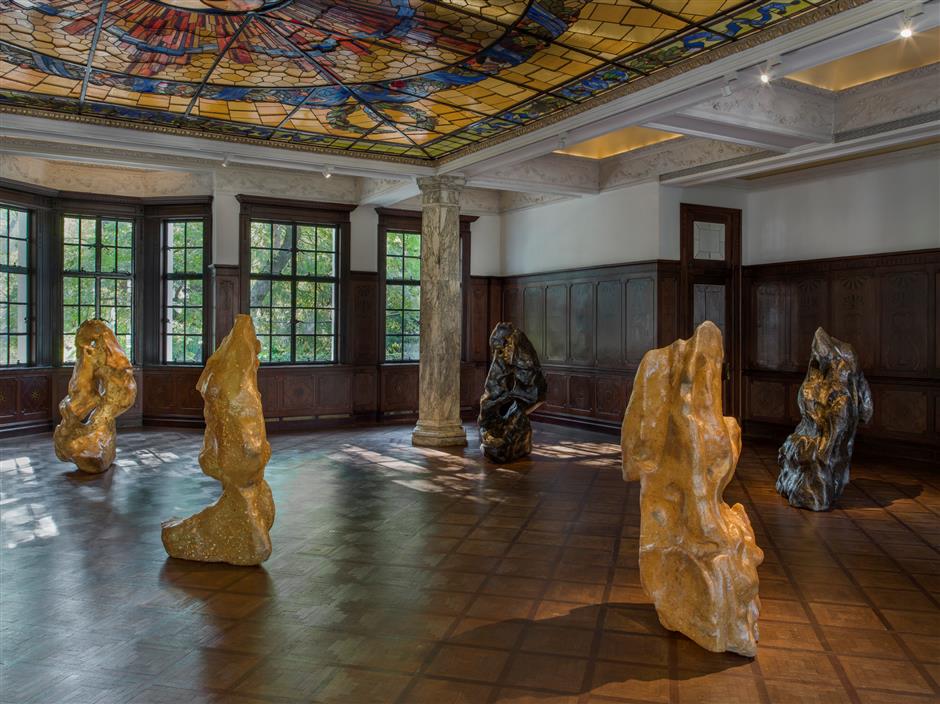 The "Taihu (Stones)" series displayed in the Ballroom is an artistic practice and biological research in collaboration with students from Tongji. They supported Wang in site exploration, collecting material, testing and fabrication.

Taihu stones has been long admired in China since the Tang Dynasty (AD 618-907) as classical garden stones, but Wang's Taihu stones are made with a different approach.

They have been created out of organic wastes – algae, cellulose and chitin, sourced from Taihu Lake itself. Algal blooms here provide materials with aesthetic and sculptural possibilities. The discarded shells from the lake's celebrated hairy crab (consumed by tourists in tens of thousands) provide chitin, a key element in novel bioplastics. Invasive plant species – water hyacinth and smooth cordgrass – are reduced to cellulose, hemicellulose and lignin, and integrated into a resin matrix.

Milling technology and 3D-scanning facilitated in shaping these biogenic materials into complex forms that maintain a very close resemblance to Taihu stones. 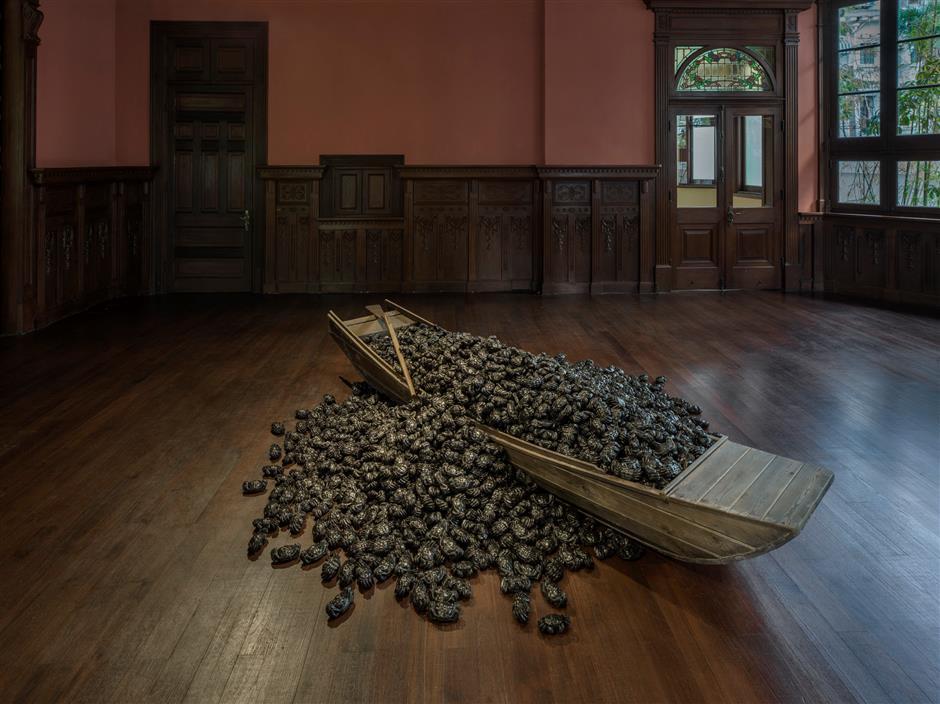 The exhibition's biggest highlight might be the 3,500 hairy crabs in the Meeting Room. Taihu Lake's most famous natural product has, at times, been threatened by the changing chemistry of the water. Here, an old fishing boat, also recycled from the lake, is overloaded with facsimiles of the hairy crabs – all produced from algae drawn from the lake.

The algae was collected by a Wuxi-based company actively involved in cleaning the lake. Capturing this carbon biomass as a durable, long-lasting artwork, the production of the sculptures itself assists in the lake's cleanup.

Sculptures in the "Suzhou Creek (Piles)" series in the Sun Room evoke the construction techniques of both the ancient settlements and modern warehouses along the creek.

In ancient times, the rot-resistant wood of Chinese fir held back the river and allowed villages to grow up along its banks. Later, factories and warehouses sprung up along the river (including those built by the Rong family). Concrete replaced wood. Today, the concrete buildings of Suzhou Creek are disappearing too, as the waterfront is deindustrialized.

In these sculptures, salvaged rebar and recycled concrete, rescued from the demolition of industrial buildings, take the form of fir tree trunks that were once used to fight flood and allowed human habitation of the riverfront. Wang revives them to memorialize the lost built landscapes of the creek. 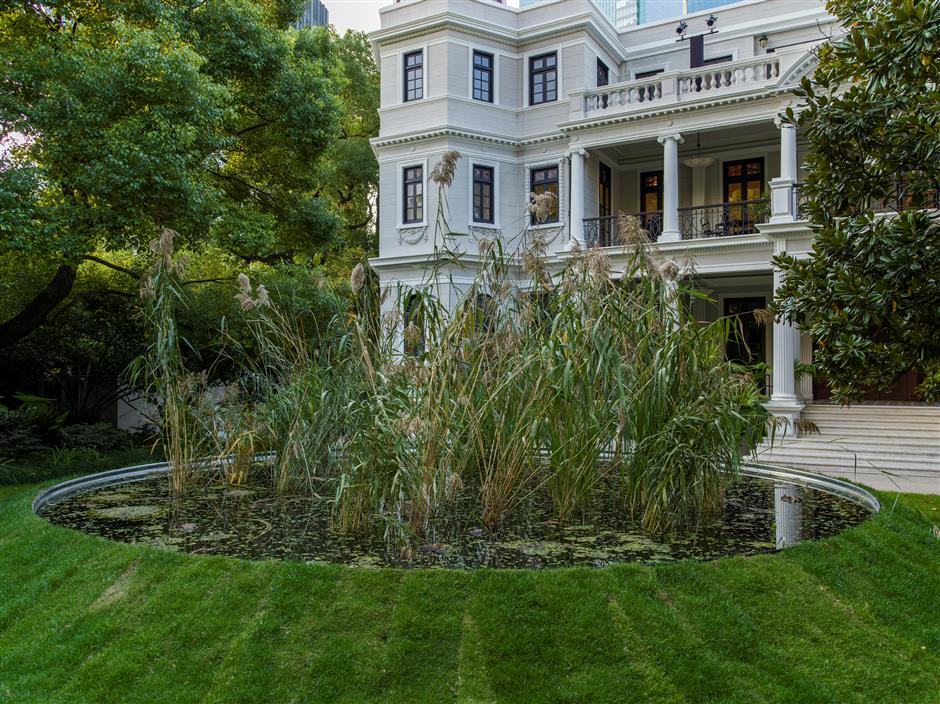 The "Shanghai Swamp" installation in the back garden recreates a fragment of the swamp ecosystem that extended into the Shanghai area before the city's development. Before Shanghai was built up and dredged, the banks of Suzhou Creek, flowing from Taihu Lake, extended into vast swamplands. The site of Rong Zhai, too, was within the marsh.

A shallow pool supports wetland species that once grew across much of what is now Shanghai, linking the region to the freshwater systems of Taihu Lake. They include Phragmites australis – a wild grass that once blanketed Shanghai but is now threatened by the invasive Sporobolus alterniflorus.

﻿
Special Reports
﻿
61829
,
A lake, a creek and a solo exhibition at a tycoon's ancient villa
Exhibition on Notre-Dame de Paris to open in Shanghai
Game On with exhibition by Spanish artist
Development of Chinese art songs recorded in book series
International artist and integrated shows light up shikumen alley
Exhibition featuring city's heritage of modern art opens
Dual art exhibition gains power from nature
Not a piece of cake but molding traditions get new lease of life
Dual exhibition with an attitude toward living the moment
Ceramic exhibition explores invisible connections of the world
EXPLORE SHINE