Spanish-based illustrator Canizales was new to the children’s book fair in Shanghai, and the Chinese kids and parents behind the huge market. He was invited by his Chinese publisher to take part in a book signing.

The Shenzhen-based publisher discovered his fun picture books, full of magic cut-outs that turn into different shapes on the next page, and published six of them in English, with another 20 planned.

Shanghai Daily talked with the first-comer about his magic books, Chinese kids and his next drawings. 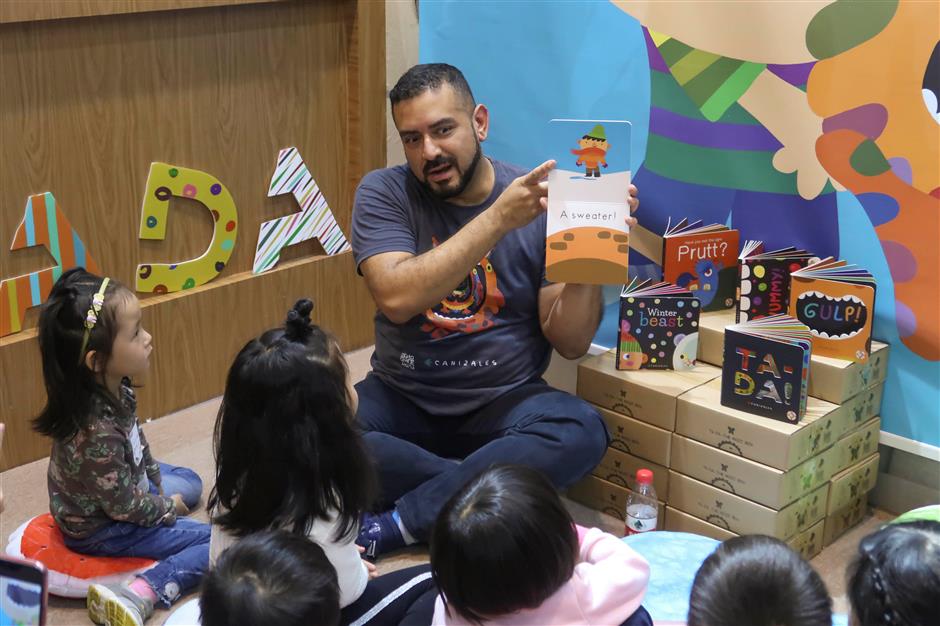 Canizales shows Chinese kids how to play with his books, which are packed with cut-outs that turn into different shapes and subjects on the following page.

SD: How many books have your Chinese publishers bought rights from you for?

Canizales: They saw a poster of one of my books last year at Bologna, and bought six, already published, which is what I’m presenting to the Chinese children today. So I brought more books here to this fair trying to sell the rights here, and we closed a deal just now, for another 20 books, from two series.

SD: Seems like your style is quite in demand here!

Canizales: I think so. I made this new collection of books that can be pieced together as puzzles. It seems fun books like such, and especially in collections, are quite popular in this market.

Originally I was trying to sell them as one book, but they don’t want one book, they want a collection!

SD: Is it different in Europe?

Canizales: Collections of books are also sold, but not such big collections of ten books like they sell here.

SD: How has the trade fair been so far? How is it different from Bologna?

Canizales: It’s quite different. There is no public area in Bologna, it’s more like a trade fair, a children’s fair without children. Here, there are professional sections and public activities.

Also, I hope to see even more Chinese publishers here so that I can talk to them about selling rights of my books, because I can meet all the European publishers in Bologna.

SD: What are some of the books you brought here that haven’t been published in China?

Canizales: This one is called “Pretty,” about how a witch comes across various animals telling her that she’s not pretty enough and needs to change different parts of her face and body.

This is a topic not covered in many children’s books, but one that I’m very concerned about.

I’m originally from Colombia, and I get worried whenever I go back seeing all the plastic surgery results on the streets.

I’m concerned that children in the future might think plastic surgery is normal, like going to the dentist.