Shanghai's cultural heritage through the eyes of shifu

Shifu in Chinese is an accomplished worker in their own trade, be it a kung fu master, bowl repairer or bamboo-weaving craftsman. In Zhou Qi’s book “Shanghai Shifu: Memories of Vanishing Handicrafts,” it refers to those who are skilled at working with their hands.

Recently published by the Shanghai People’s Fine Arts Publishing House, the book records the memories of 60 handicraft shifu in Shanghai. Many of them have been making bamboo baskets, wooden buckets, rattan chairs, zodiac lanterns or cotton shoes their entire lives.

“In Shanghai, most handicrafts for daily use come from towns and villages in the suburbs of Jading, Qingpu, Fengxian and Minhang districts,” said Zhou, who started her research in Zhujiajiao Town, Qingpu District, in 2012 and completed it last year in Xuhang Town, Jading District. “They bring with them a green and simple lifestyle.”

A native of Shanghai, Zhou is a writer and designer at Shanghai View Studio. Established in 2009, the studio mainly chronicles changes in Shanghai, mostly from visual angles most people don’t notice, such as old newspapers, periodicals, books, movie posters, advertisements, calendars, match boxes, theater tickets and concert programs from second-hand bookstores, markets and collectors. Zhou, 34, has curated many cultural exhibitions and events to promote the city’s heritage.

“Shanghai Shifu” is her second book about Shanghai housewares, published in both Chinese and English. The book sketches the landscape of everyday housewares in Shanghai, and a lifestyle that is slowly vanishing as modern technology quickly changes the way we live. 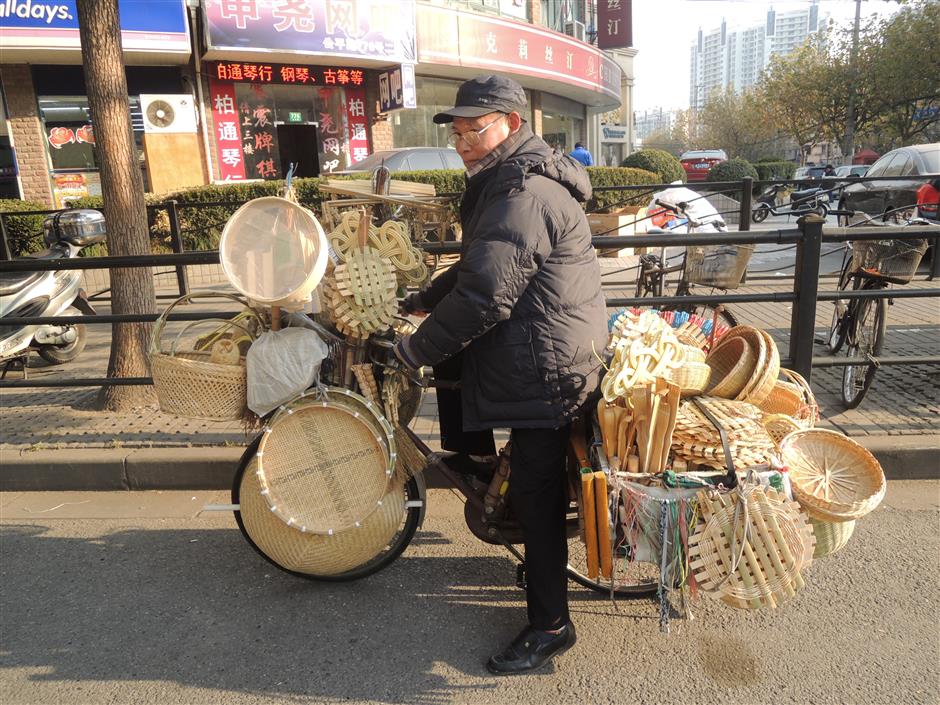 A shifu on a bicycle loaded with bamboo-weaving housewares comes in handy.

Wu Dehua, 71, is a bamboo-weaving craftsman from Hongqiao Town, Pudong New Area. He learned the craft from a shifu when he was 10 years old, and can create virtually anything with bamboo strips.

“To learn bamboo weaving, you should be younger than 15 years old,” Wu said. “Otherwise, your hands get stiff and lose their agility.”

Xu Wenming, 79, is a carpenter from Chengqiao Town, Chongming District. He started helping his father in the family workshop at the age of 12, and later worked in a local furniture factory where he made stools and different kinds of tables. Since retiring, he passes the time making shengluo, a rice-cup measuring tool that comes in sets of five.

“Few people use wooden shengluo nowadays,” Xu said. “I just make them to give to people on their birthdays for good luck, as shengluo in Chinese sounds like ‘get rich.’”

Yang Shenxi, 83, runs a family shoe shop called “Yang Rui Ji” in Zhuanghang Town, Fengxian District. He recalled there were once four shoe shops in town, but now his is the only one that sells traditional cloth shoes.

“In the old days, without overboots, we would make a kind of spike shoes with the vamp covered with waterproof oil that were good for rainy days,” Yang said. “The cloth shoes with two wool bobbles on top were specially made for weddings, and cotton-padded shoes were made for winter.” 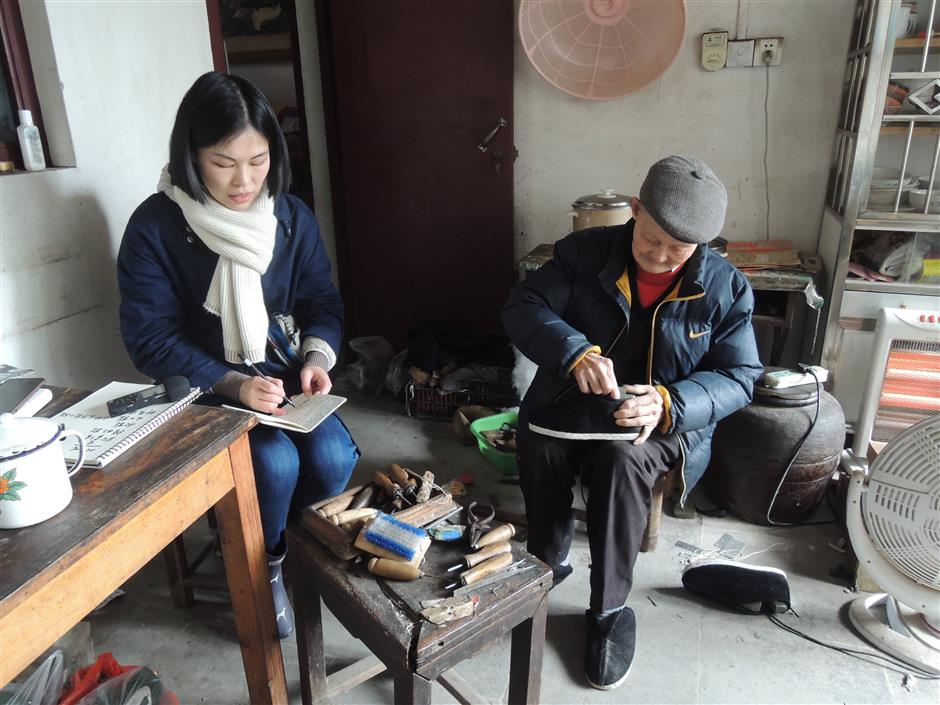 In Liantang Town, Qingpu District, Shen Muyun, 64, makes fanke, a container that keeps cooked rice warm, with field straws. Years ago, people in Shanghai used coal stoves to cook, and every household had a fanke to keep their cooked rice warm while preparing other food.

“As life has improved, we now use electric cookers and microwave ovens instead of fanke,” said Shen. “These days, there’s no more straw in the fields, so it’s difficult to find a fanke in markets.”

“Zhou Qi began writing this book independently in 2012, and I have followed her to keep track of her whereabouts,” Jiang said. “It took eight years, and it’s the result of her hard work.

“Generally speaking, rather than providing guidance to what we present in the book, readers need to feel it by themselves. Everyone in Shanghai comes from a different place. Thus, everyone’s experience is different.”

According to Jiang, handmade products in the cities and regions around Shanghai, such as Suzhou, Wuxi, Hangzhou, Nanjing and Anhui, are much richer than those in Shanghai.

“I hope the book ‘Shanghai Shifu’ will inspire young people in other cities to start recording the mundane of everyday life from a local perspective,” Jiang said. “What’s more deserving of praise than the meticulous, calm way of recording your own life?” 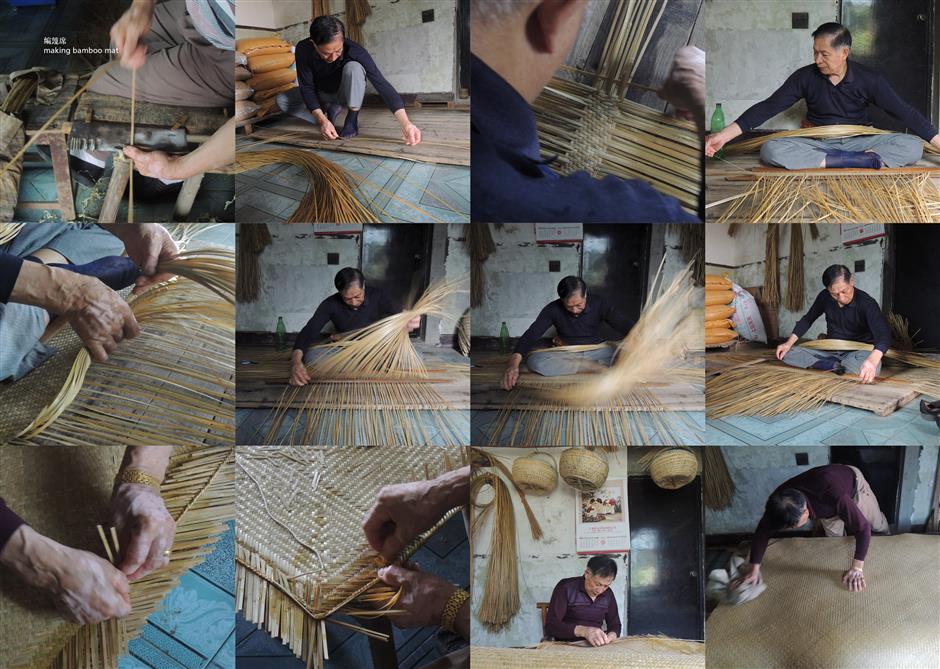 The procedures of making a traditional bamboo mat for keeping cool and comfortable on warm spring, summer and fall nights.

Q: When and how did you join Shanghai View Studio?

A: After graduating from university, I worked at a foreign company. Many foreign colleagues wanted to learn about the city through us Shanghai natives. Only then did I realize how little I knew about Shanghai. There were so many places I hadn’t seen. Later, when I was asked to write a feature story on “the most Shanghai for a magazine from Beijing, I interviewed Shanghai native designer Jiang Qinggong. The article was completed but the interview felt incomplete. I became intrigued about what the Shanghai he knew was like before I was born.

In 2011, I formally joined Jiang’s Shanghai View Studio to focus on what makes modern Shanghai tick by exploring the city’s suburbs and getting familiar with indigenous handmade products and the people who make them. Like a shifu, Jiang gave me a lot of guidance on where to find them.

Q: Where does your interest in handmade products come from?

A: Handmade products were part of my life when I was a child, and I still like them. When I was studying graphic design at the Shanghai School of Arts and Crafts, I learned crafting and carpentry at the school workshop. Understanding the production process influenced my concept of consumption. I used to live next to Nanjing Road where there are many shopping malls. However, families still needed to figure out what were and weren’t daily necessities, such as fixing a broken basket or a zongbeng mattress, buying new clothing pegs or sharpening scissors. A shifu on a bicycle came in handy.

Q: The book has surprised many, as it inspires authentic nostalgia that goes back decades when people had no choice but to make things with whatever was at hand.

A: Many people ask me how I could be so nostalgic at such a young age. I tell them my sense of nostalgia isn’t based on a distant memory — older generations lived a simpler life for a long time. Lifestyle is not something that can be formed just by flipping through magazines and watching movies. Everyone’s life has a root. It’s like my granny is more likely to sit in a rattan chair the older she gets. Industrial products are very convenient and fashionable, but some handmade products cannot be replaced, because they are tailor-made, inexpensive and eco-friendly.

Q: Through the eight years it took to create the book, what was the biggest problem you encountered?

A: The idea of giving up. Haha. Anyone can give up; it’s the easiest thing in the world to do. Interviewing every shifu wasn’t easy, because of the different dialects they speak and their reluctance to talk before knowing my intentions. I revisited some of them five or six times before we were comfortable with one another. Considering many shifu are in their 70s and 80s, they likely won’t be able to work much longer.

“Shanghai Shifu In Your Neighborhood” is currently on display at the Xuhui Art Museum, featuring more than 60 household items made from bamboo, cloth and straw. The exhibition also includes Zhou’s sketches of each shifu at work with all the fine details in the daily life, as well as a video of her field research in Shanghai’s suburban districts. 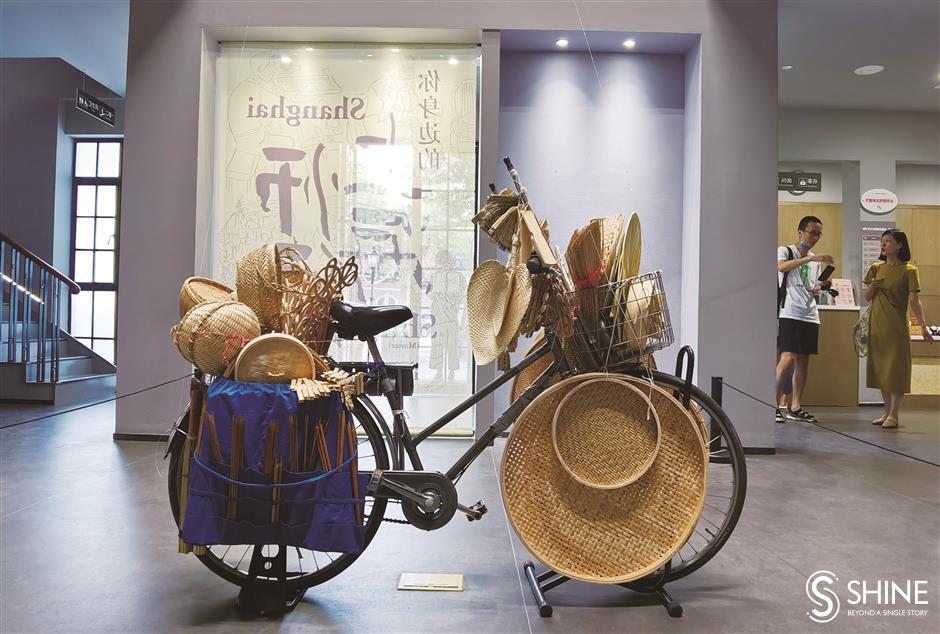 Special Reports
﻿
Sci-fi writer experiments with the effects of AI
Vibe of a 'world city' captured over 20 years
100-volume book series on ancient Chinese printing issued in Shanghai
Lensman captures the innocence of the 80s
'The Enchanted Knight' who rode into literary folklore
The men and brands that gave Shanghai its identity
Testing times for post-pandemic publishers
Did Snow White deal with midlife crisis?
Shanghai's cultural heritage through the eyes of shifu
Grasping ancient culture: It's fun and easy!
EXPLORE SHINE