'The Enchanted Knight' who rode into literary folklore

In 1922, when The Commercial Press in Shanghai published “History of the Enchanted Knight,” a Chinese translation of Don Quixote, there was no mention of the ingenious nobleman from the region of La Mancha in central Spain in the title of the book.

The Spanish classic was translated into classical Chinese by Lin Shu, who was then 70, and Chen Jialin, 30 years his junior, from the English version of Miguel de Cervantes’s novel “Don Quixote.”

But Chen Kaixian, a Cervantes expert and a professor at the Nanjing University Jingling College, is not surprised that the legendary character from one of the world’s most widely translated books was missing from the Chinese title.

“Most Chinese had never heard of Don Quixote, except probably the elites who had traveled abroad or had mastered some of the foreign languages,” says Chen Kaixian.

He cites the example of Lin’s translation of Alexandre Dumas fils’s “La Dame aux Camélias” in 1898, which was published as “The Legacy of the Parisian Lady of the Camellias” in Chinese. 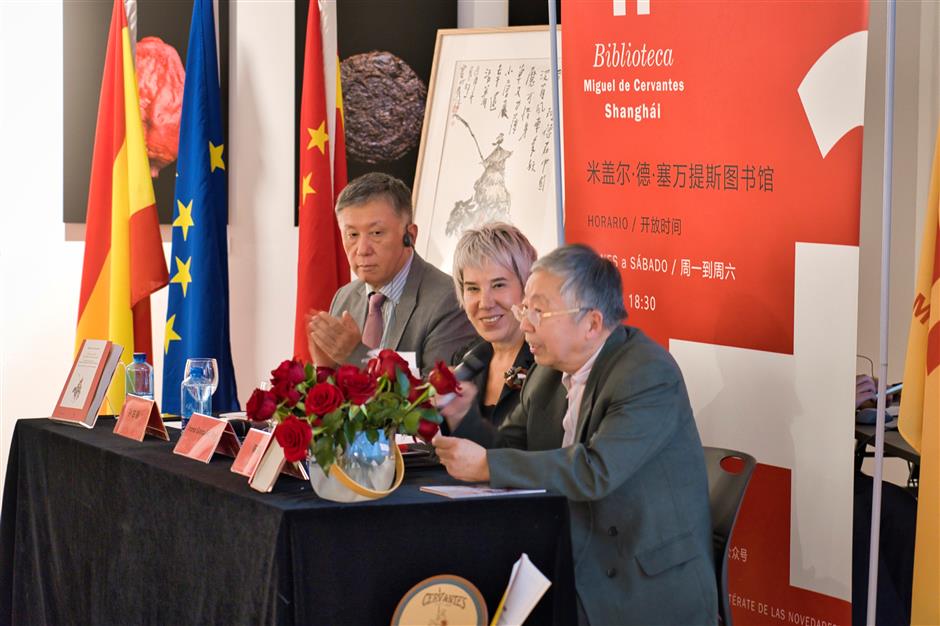 Chinese writer Sun Ganlu, Inma González Puy, director of the Instituto Cervantes in Shanghai, and Chen Kaixian, a Cervantes expert, at the book launch of Relinque’s translation of Don Quixote in Shanghai recently

Lin, born in 1852, was a self-taught scholar from Fujian Province in southeast China and rose from relative obscurity to become one of the leading translators of foreign fiction at the beginning of the 20th century. Working with his assistants, Lin translated, or more accurately, rewrote close to 180 Western novels from English, Spanish and Japanese, into classical Chinese.

When Inma González Puy, director of the Instituto Cervantes in Shanghai, discovered Lin’s “History of the Enchanted Knight” in 2013, she called it “a little jewel even though it looked like an ordinary notebook.”

González Puy sought the help of Alicia Relinque, a professor of classical Chinese literature at the University of Granada, to translate Lin’s book back into Spanish — a project she said was “double homecoming” with Don Quixote trotting back to Spain after a century in China. The book was recently published by The Commercial Press with Lin’s text (in classical Chinese) and Relinque’s translation (in Spanish) in a bilingual edition.

“We intended to give a glimpse of how Don Quixote’s image was accepted in China almost 100 years ago,” said Relinque.

“Probably the difference is that the character created by Cervantes is a bit absurd and a madman, but Lin gives him dignity, bringing him closer to an educated man — more literate than a warrior — disappointed with the world in which he lives, but very honest and generous.”

Lin was accused of “mistranslation” and omitting key aspects in his translations by Chinese critics, but according to writer Sun Ganlu, vice chairman of the Shanghai Writers’ Association, Lin’s works closely related to the tradition, culture, and social environment prevalent at the time. In short, Sun says, it was a conversion of different cultures. 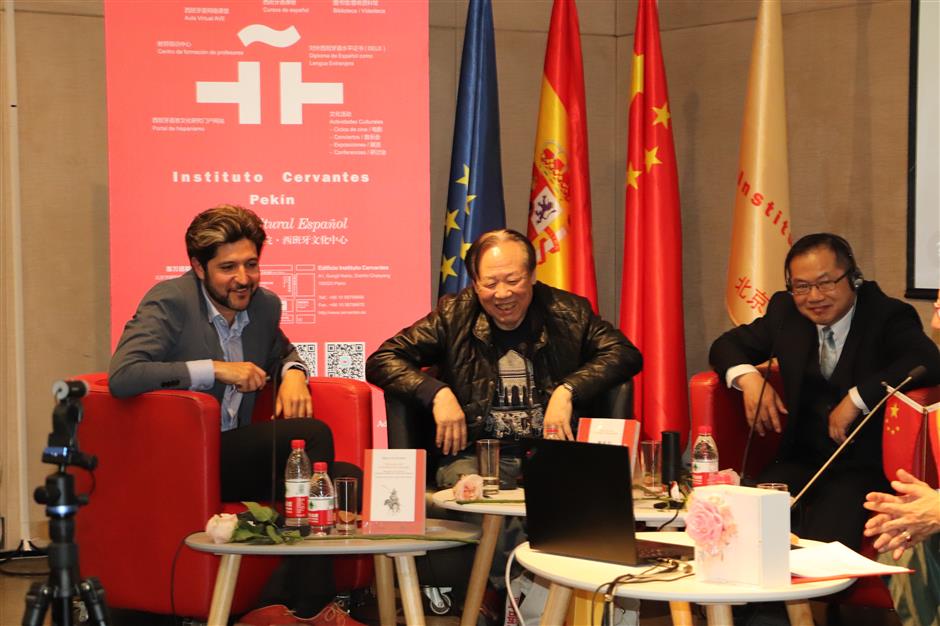 For example, Lin removed all references to God and upgraded the lean old nag Rocinante to a “fast horse.” Don Quixote, known in the book as Quesada, is less deluded and more learned, while Sancho Panza is more of a disciple to a cultured master than a squire to a mad knight.

The priest who tries to cure the nobleman of his delusions becomes a doctor while Dulcinea, the peasant woman whom Don Quixote idealizes, is described with the beautiful Chinese epithet of “Jade Lady.”

“Lin lost readers, partly because his works were published in classical Chinese, which fell out of favor with the May Fourth Movement’s advocacy of baihua literature (vernacular literature) in the 1920s,” says Sun.

For Relinque, Lin’s work is almost like a translation manual, “where you can check all the processes that translators of literary works go through.”

The Spaniard has been studying Chinese since 1976, first in Spain and then in France, before getting into Peking University for further studies from 1985-89.

She has translated several classical Chinese texts into Spanish, such as “Wen Xin Diao Long” (Literary Mind and the Carving of Dragons), literary criticism by the 5th Century Chinese scholar Liu Xie; and “The Peony Pavilion,” a masterpiece by Ming Dynasty playwright Tang Xianzu (1550-1616). 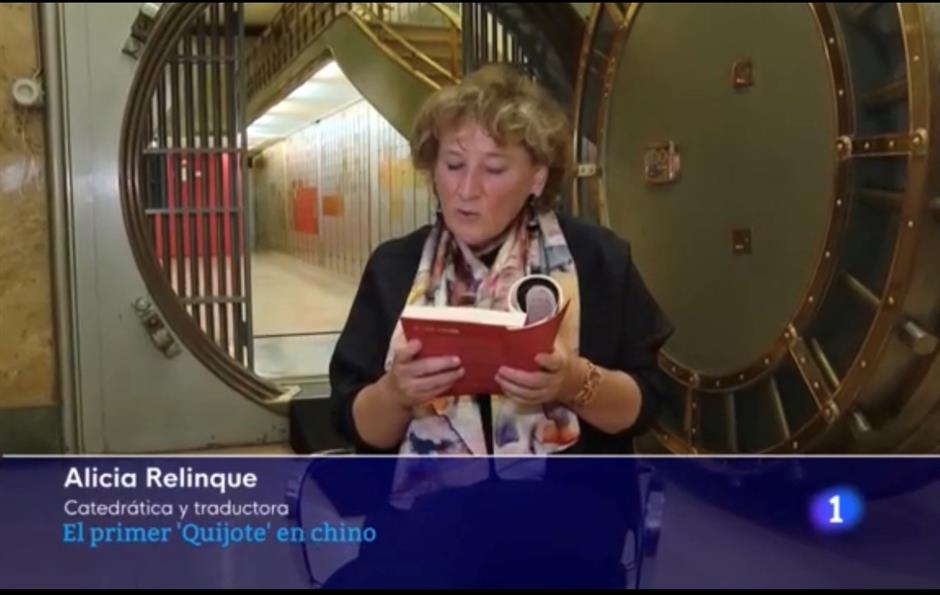 Q: How did the Spanish react when Cervantes’s “Don Quixote” was first published in Spain?

A: “Don Quixote” has been a resounding success since it first hit the stores. Accompanied by his faithful Sancho, he embarks on his travels and we see his clumsiness, his madness, but also his enthusiasm, his deep love for his beloved Dulcinea, which awakens sympathy in all of us. This, together with the command of Cervantes’s language, wit, grace, and sagacity, make reading Don Quixote an intense pleasure.

Q: Did Lin translate from the original book by Miguel de Cervantes?

A: Lin translated the first part of “Don Quixote,” the one that Cervantes published in 1605. The second part, which was published in 1615, was not included in Lin’s translation.

From that first part, I would say that Lin translated between 90 percent and 95 percent of the original, in two volumes and 132,912 characters in total. The story is complete, practically all the adventures of Don Quixote from the original appear in the translation. The only thing that he left out was the prologue and the reference to the character Cide Hamete Benengeli. This fictitious character was created by Cervantes as if Cide Hamete was the true author of “Don Quixote,” and Cervantes, just the man who narrated the novel. In some fragments, Lin abbreviates some speeches but never eliminates them completely.

Q: What is the academic value of translating Lin’s “History of the Enchanted Knight” back into Spanish?

A: From the point of view of comparative literature, I think the book’s translation back into Spanish is a perfect example of how literature has traveled from one country to another. Lin used at least two English versions written in the 18th century, the one by Pierre Motteux and the other by Charles Jarvis, in which there were already some alterations to the original.

For example, Motteux, who was a Protestant, had eliminated some references to the Catholic God that appears in Don Quixote — deletions that Lin would reproduce. This type of elimination is a treasure because it allows us to understand the evolution of a literary work in different historical contexts, in different countries.

On the other hand, from the point of view of translation studies, you can see how Lin and Chen worked together, how they were adapting popular Spanish expressions into classical Chinese, which had become English expressions to end up becoming Chinese chengyu (the four-character idioms).

Q: As for general readers?

A: I think for a Spanish-speaking reader it may be fascinating to see this Don Quixote, whose history they are familiar with, tinged with some Chinese nuances. For example, on several occasions, their attention will be drawn to the paternal-filial relationship, something that does not appear in Cervantes’ original or in the English versions.

In the version published in Spain and Argentina, there are more than 650 footnotes that carry information on curious aspects that may be of interest to get a little closer to China. We read of a man who sticks to traditional customs, holds a shield, rides a fast horse, and leads a hunting dog — someone who was more familiar to the Chinese readers of Chinese literature.

(This interview with Alicia Relinque has been abridged by Shanghai Daily.)