New book chronicles the lives of Hungarians in old Shanghai

Between the two world wars, old Shanghai was a magnet for youngsters and old hands alike from all over the world who flocked to the faraway land in the hope of striking a fortune.

Among them, Slovak-Hungarian architect Laszlo Hudec left a lasting impact on the city.

Between 1918 and 1947, the architect from Besztercebanya was involved in over 50 building projects, and designed more than 100 structures in what has been described as the golden age of construction in Shanghai. More than 30 of his works, including the Park Hotel and Grand Theater, are recognized today as heritage structures.

With Hudec's meteoric success and the ongoing building boom, it was inevitable that other architectural firms would be drawn to the city as well.

Bela Matrai, from Budapest, began as an assistant to Hudec and worked with him on projects of such importance as the Park Hotel, Grand Theater and the Aurora College for Women. He later struck out on his own, establishing his own design company, and left his imprints on Bauhaus-style structures like the Culty Apartments and the Marguerite Apartments on today's Hunan Road.

Marguerite was the name of his eldest daughter.

Also, Karoly Gonda and his assistant Rudolf Somjen designed over 60 buildings in Shanghai, including the Sun Sun Department Store, Capitol Building, Cathay Theater and the Bank of East Asia on the Bund.

Janos Komor designed and supervised the construction of the Lester Institute in Hongkou District and the Mitsubishi Bank near the Bund. Archive records from 1920 show that he was involved in the planning of the Shanghai Foreign YMCA Building.

The incredible achievements of the Hungarians, who made Shanghai their home, are documented in the book "We Hungarians of Shanghai." Records show that approximately 800 Hungarians lived and worked in the city from 1890 to 1949.

"My heart would leap every time I turned a corner and found traces of Hungarian heritage in this city," said Szilard Bolla, consul general of Hungary in Shanghai. "I did not believe that I would truly find my second home here."

"We Hungarians of Shanghai" is the third installment of a book series published by the consulate. The previous two feature architects Hudec, in 2017, and Gonda, in 2019.

The latest book weaves together the lives of 60 Hungarians who lived and worked in Shanghai over a span of 60 years. Besides architects, there were bankers, engineers, restaurant owners, painters, musicians and dancers.

"While researching Hudec and Gonda, we came across some Hungarian names we were unfamiliar with. So we decided to dig out stories of them, who lived in Shanghai between 1890 and 1949," said Livia Szentmártoni, former consul for culture and education who edited the book.

Szentmártoni is fluent in Chinese. The senior diplomat, who had been posted in Shanghai for eight years, spent time at the National Archives of Hungary, and approached other Hungarian and Chinese bureaus, institutions and individuals while compiling the book.

"Szentmártoni consulted us many times on details, as well as the Chinese translation of the content, and humbly accepted revisions that we had suggested," said Dai Yichen, a Shanghai Academy of Social Sciences researcher.

"She has spent a lot of time and efforts sorting and digesting all of the documents, and is familiar with the Hungarian community from the past," Dai said. "Those graphic details, as well as the carefully chosen photographs of old Shanghai, reveal her true love for the city."

Szentmártoni wrote the historical introduction to Shanghai as well as the biographies of the 19 Hungarians in the book, in addition to editing it.

"The most difficult part was locating the relatives of those Hungarians who once lived in Shanghai," Szentmártoni explained. "We were fortunate to find some of them, allowing us to complete the book with reliable information and stunning photographs."

Five other diplomats – including the former consul general of Hungary in Shanghai – three archivists, the director of the Hopp Ferenc Museum of Asiatic Arts and a Hungarian coach-author in the city contributed to the book. 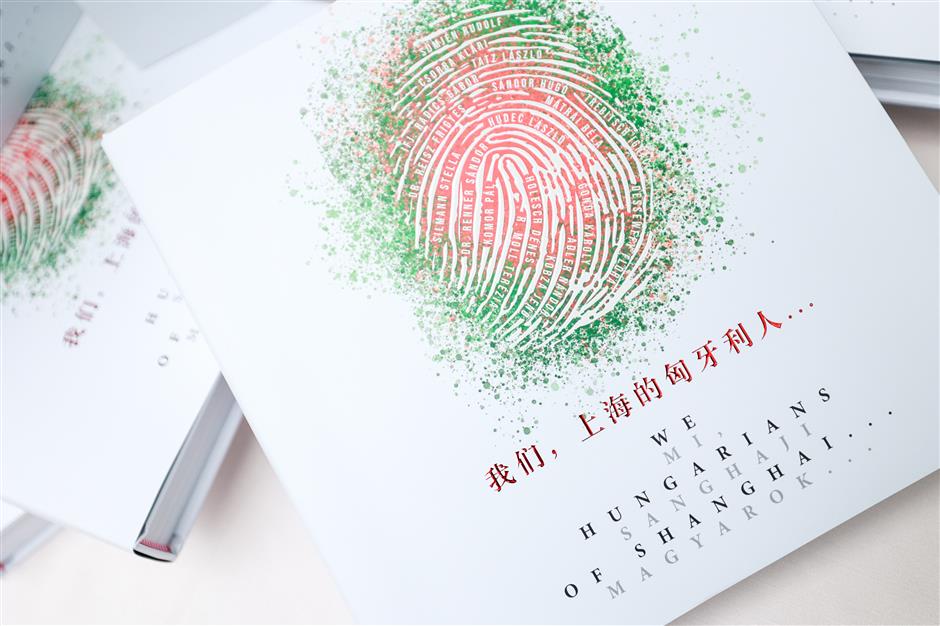 Courtesy of the Consulate General of Hungary in Shanghai

"We Hungarians of Shanghai" is written in Hungarian, with English and Chinese translations.

"The yearbook shows Shanghai had a population of around 60,000 registered foreign residents in 1931. The number remained unchanged for a couple of years," Dai said.

Told from a Hungarian perspective, the book captures the upbringing, marriage and careers of 60 Hungarian men and women and their unique contributions to the city's development.

"For a Hungarian community that accounted for less than 0.01 percent of the total number of foreigners in the city at that time, not much work has been done from the Chinese side," said Wang Jian, another SASS researcher. "That is primarily due to the lack of firsthand materials or sufficient language skills."

Thanks to the book, we now know the Komor family were the first Hungarian merchants to set foot in Shanghai from Yokohama, Japan. John Komor led the Hungarian Relief Foundation from 1923, overseeing the settlements of his fellow countrymen freed from captivity in Siberia after World War I and Jewish refugees fleeing Nazi persecution during World War II.

Other offbeat stories include that of Gyula Szamwald, who was a friend of poet Sandor Petofi in Pest, a general for Abraham Lincoln in Washington, and the US consul general in Shanghai in 1884-85. He finds pride of place among the US consuls general whose portraits adorn the walls of the US consulate in Shanghai.

"The Hungarians contributed the most to Shanghai's modern architecture," said Wang. "The other notable contribution was in the field of art."

Denes Holesch was a painter-architect best known for his horse paintings. His paintings frequently feature Asian motifs, and he is said to have been heavily influenced by Chinese master Xu Beihong, known for his ink-wash paintings of horses.

Gyorgy Roman, an art student, arrived in Shanghai in 1928 to join his sister and father. During his time here, he mastered the art of making chocolate and was pre-occupied with boxing. He returned home at the end of 1936, but his time in the Far East was a recurring theme in his writing and painting.

Little-known Klari Csorbra sang hundreds of chansons and folk songs for the local radio station. There was also theater director Gottfried Ferenc Gmehling. Known as "Shanghai's Reinhardt," he directed and produced nearly 30 plays between 1929 and 1940 for amateur German and English theater troupes in Shanghai.

"It was the openness and the inclusiveness of the local population that provided a platform for foreigners to showcase their talents. In return, they injected much vitality into the city and created diversity for further development," said Wang.

In recent years, an increasing number of foreigners have become interested in their countrymen's history in the city. In 2001, journalists Stein Seeberg and Gunnar Filseth published the book "In the Kingdom of Yangtze: Norwegians in Shanghai for 150 years."

The Miguel de Cervantes Library in Shanghai hosted an exhibition titled "Spain's China Dream" last year. There were several documents, images and texts from the Spain-China Archive on display.

"Haipai (Shanghai style) is a unique East-meets-West culture in Shanghai that blends tradition with fashion. Since the opening of the Shanghai Port, tens of thousands of foreign nationals have worked and lived here. They have left their footprints in the city and have had a wide and profound impact on the evolution of Shanghai," said Wang.

﻿
Special Reports
﻿
New book chronicles the lives of Hungarians in old Shanghai
Sci-fi writer experiments with the effects of AI
Vibe of a 'world city' captured over 20 years
100-volume book series on ancient Chinese printing issued in Shanghai
Lensman captures the innocence of the 80s
'The Enchanted Knight' who rode into literary folklore
The men and brands that gave Shanghai its identity
Testing times for post-pandemic publishers
Did Snow White deal with midlife crisis?
Shanghai's cultural heritage through the eyes of shifu
EXPLORE SHINE