Chinese writer Chen Danyan recently launched her new experimental novel on the Rose Island in the Shanghai Chenshan Botanical Garden. Invitees to the book launch were told to scan QR codes to listen to Chen’s stories about the roses that she associates with popular folk characters like Snow White, Cinderella, Romeo and Juliet, Madame Butterfly and The Lady of the Camellias.

The unusual setting surprised the gathered folks. Chen said that “when the coronavirus put a stop on all her travel plans,” the roses at the botanical garden provided her the inspiration for her new book, “Snow White’s Resume.”

Her latest work incorporates three stories — all unrelated — about midlife crisis but brought together under the theme of love and pain.

“Marionette” is a novella based on Chen’s research on puppet plays. As an art form, puppetry is believed to have its roots in ancient cultures. The story centers around a Chinese puppeteer Li Ping, who has “played” the central role of Snow White all her life. Now, nearing 50, she sees the end of her role — and career — as puppets are gradually replaced by animation. In the twilight of her career, she makes an effort to visit all the puppet theaters and museums in the world.

“True Words” deals with a cross-national marriage. May Peterson returns to her childhood home in Shanghai for TCM treatment after being diagnosed with cancer. But it isn’t until her death that her husband flies in and regrets never visiting his wife’s hometown earlier. May is fascinated by the ephemeral beauty of clouds. Bed-ridden for months as she faces death, her mind is the sky and the clouds her thoughts.

“Red Delicious Apple” is a short story dealing with long-distance relationship, and the struggles to keep it alive as age takes a toll on the body. The decaying roses of cold winter days is a metaphor for the slow death of romance.

As the name suggests, “Snow White’s Resume” is influenced by Grimm’s Fairy Tales, a subject Chen researched for her graduation paper. 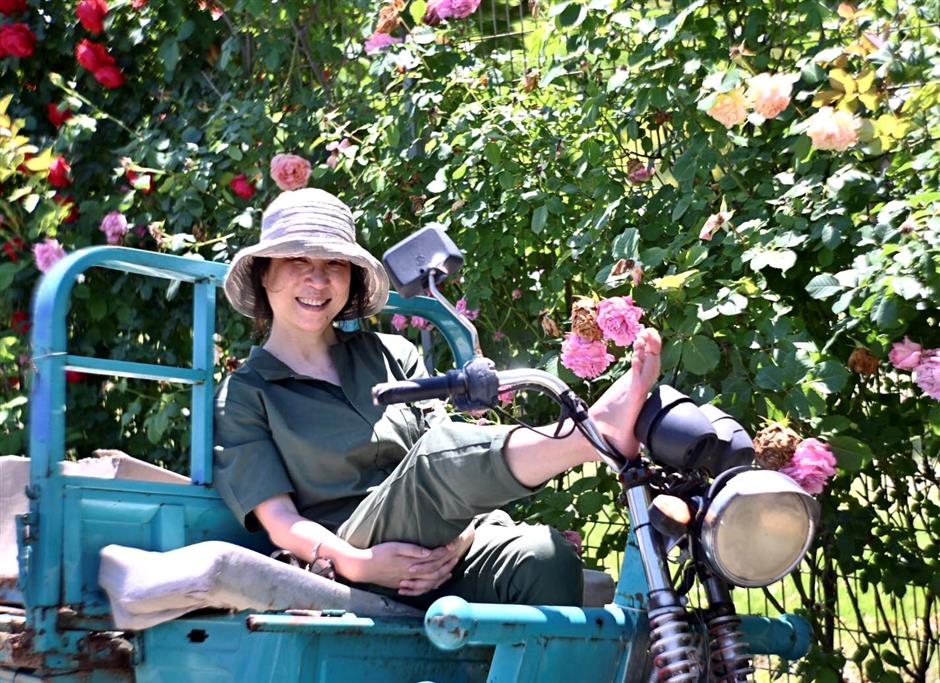 Chinese author Chen Danyan has been named the “cultural president” of the Shanghai Chenshan Botanical Garden.

“Fairy tales are always associated with childhood. They remind us that love rules the world and the Good will always defeat the Evil. We are almost sure that everybody has his or her favorite fairy tale,” says Chen. “Mine is the ‘Snow White and the Seven Dwarfs.’”

A fairy tale it may be, but Chen’s Snow White has grown with her, watched the world and experienced the vicissitudes of life. She is among the earliest backpackers to seek out adventure from China. Her wanderlust has taken her to hundreds of cities across the world, culminating in the publication of 12 travel books spanning over three decades.

In her middle age, she is no longer the “fairest of the day” as her resume lengthens, her mind opens and her heart strengthens. She said the puppets, the clouds and the roses are her metaphors of middle-aged women — their conditions, spirits and fantasies.

“For women, turning 50 is a milestone. Society tells you it is a crossroad. Your body underscores the point. Every woman over 50 feels it. The kids are going to college; parents are aging... It is never easy to cope with life’s changes, and the way to deal with them is to let them be,” says Chen.

The Shanghai-based writer acknowledges the fact that young readers may find it difficult to comprehend her characters, “because they have yet to experience the complexities of love and life. They are unable to grasp the bitterness of grief and the sweetness of joy that make up the middle age.”

Chen spoke to Shanghai Daily on her latest work and the inspiration behind the book. 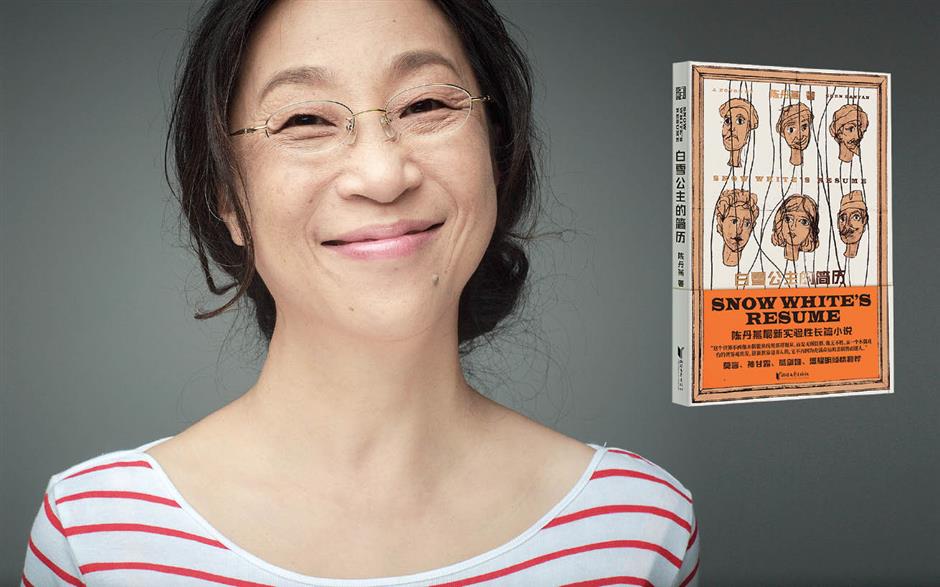 Q: As an experimental fiction, the book “Snow White’s Resume” is full of ideas and fueled by inspiration. How does your idea materialize?

A: It took me nine years to finish the book. I felt as if I was back in the years when I first started writing. I wasn’t sure what the book would eventually turn out to be, but the story itself compelled me to put words on the page.

It was not until all the three stories had been written that I thought they might be well-woven into one novel. All the characters go through similar crisis despite coming from different strata of society and upbringing. Their struggles, it seems, are universal.

Q: Snow White is a character from the 19th century German fairy tale by the Brothers Grimm. Who is the Snow White in your novel?

A: The Brothers Grimm published “Snow White” in 1812 in the first edition of their collection “Grimms’ Fairy Tales.” Over the years, modern adaptations of the tale have twisted much of its original version to suit the needs of young readers. Perhaps the most interesting is this: in the 1812 version, the Evil Queen, also known as the Wicked Witch, is Snow White’s mother. In most cultures, the image of a woman often swings between Snow White and the Wicked Witch. Snow White sees the world in a simple, unguarded way. However, as she grows up, she will eventually become a Wicked Witch.

I think this is the condition of many middle-aged women — when you are no longer young but not old enough. They always see things in a negative way, become very suspicious and cynical. However, being the Witch not only means a certain freedom that is denied to Snow White, but also means that you’ve developed your own abilities that Snow White doesn’t have, which is increasingly attractive. This is the topic that I explore.

Q: What is the message you want to convey through your characters?

A: The novel is my understanding of the character of Snow White as I age. Each character attempts to bring about a change in his or her own life. It is not easy. When you are nearing 50, send your kid off to college, or after you’ve been married 25 years and see the reality around, you get the realization that all fairy tales are lies or are fantasies. I wish readers would be encouraged, rather than feel despair and sad, after reading my book.

The world is not perfect, but then neither are we. That’s life.

Q: The book “Snow White’s Resume” includes nearly 70 pictures. How does that work in a novel?

A: I take a lot of pictures during my travels. After I published 12 travel books, I wanted to further explore the relationship between words and images. Most people are uncomfortable with it and see it as something inferior about using images to express ideas in novels. In fact, for text-heavy books like novels, if well played, it can free up space for more imagination while reading. 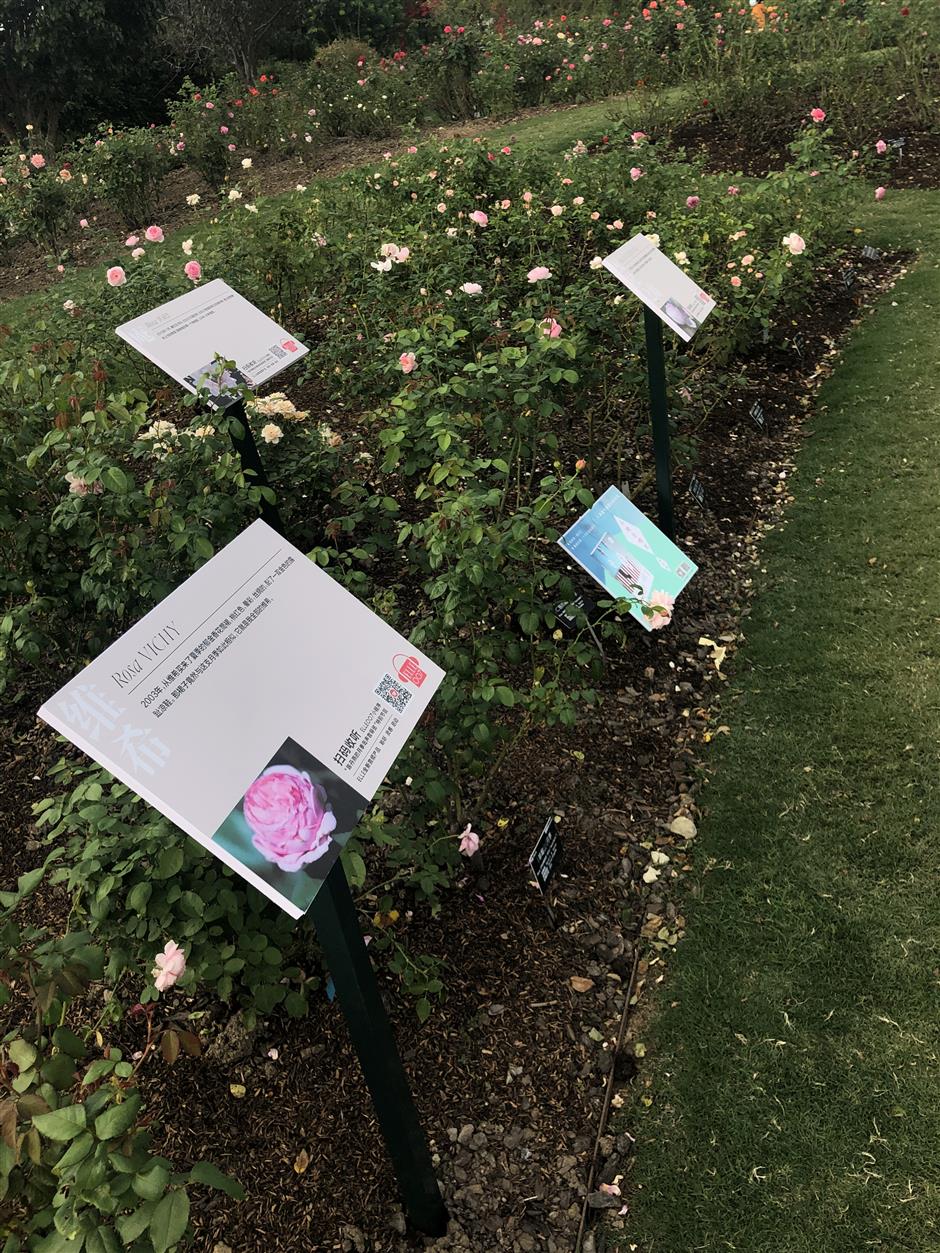 Visitors can scan QR codes to listen to Chen’s stories about the roses that she associates with popular folk characters like Snow White, Cinderella, Romeo and Juliet, Madame Butterfly and The Lady of the Camellias.

About the Rose Island in Shanghai Chenshan Botanical Garden

The Rose Island covers an area of 6,000 square meters near the south gate of the garden. There are about 500 varieties of modern rose among the 5,000 plants, which are highly resilient and can grow in any type of environment. Boasting the richest collection of rose species in east China, the garden also serves as a research and educational base for rose plantation and cultivation in the country. The best period to enjoy the roses at the Chenshan Botanical Garden is from May to November.