After all, we are what we eat

When marine expert Shen Hong secured a paddy field on suburban Chongming Island in 2004 and began to farm it, sustainable agriculture was still a little-known concept in Shanghai.

The micro-ecological system he built, which included farming crayfish, crab and turtles alongside rice, was so successful that he pretty much gave up the urban life downtown to spend time on the land. His sustainable methods have since extended to more than 67 hectares across several villages on the island.

Some of his friends are still puzzling over the fact that Shen gave up a successful office career to become a professional farmer.

“I am a happy farmer,” says Shen, who used to work for the city’s oceanic bureau. “I have a place nearby, inside the forest, where I can enjoy nature, do field work and go fishing in my leisure time. I only go back downtown when I have to.”

About halfway between Chongming and the city is Changxing Island, known to all Shanghai residents for its orchards of oranges and tangerines. It was on this island that urban planner Huang Guili started an eco-farm in 2013 and introduced a new variety of tangerine with an edible peel.

“Farming doesn’t have to be painstaking labor anymore. It can be romantic,” says Huang, who is originally from a fishing village in Hainan Province. “I am a romantic farmer and I want to promote this idea to change the stereotypical image of Chinese farmers, which is that they are old, uneducated and poor.” 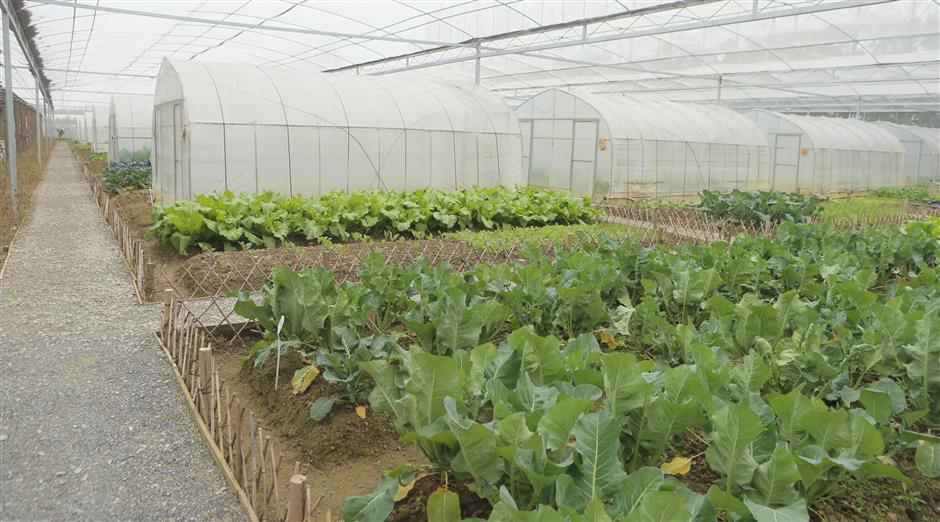 The vegetable patch in a greenhouse on Huang Guili’s tangerine farm on Changxing Island of Chongming District. 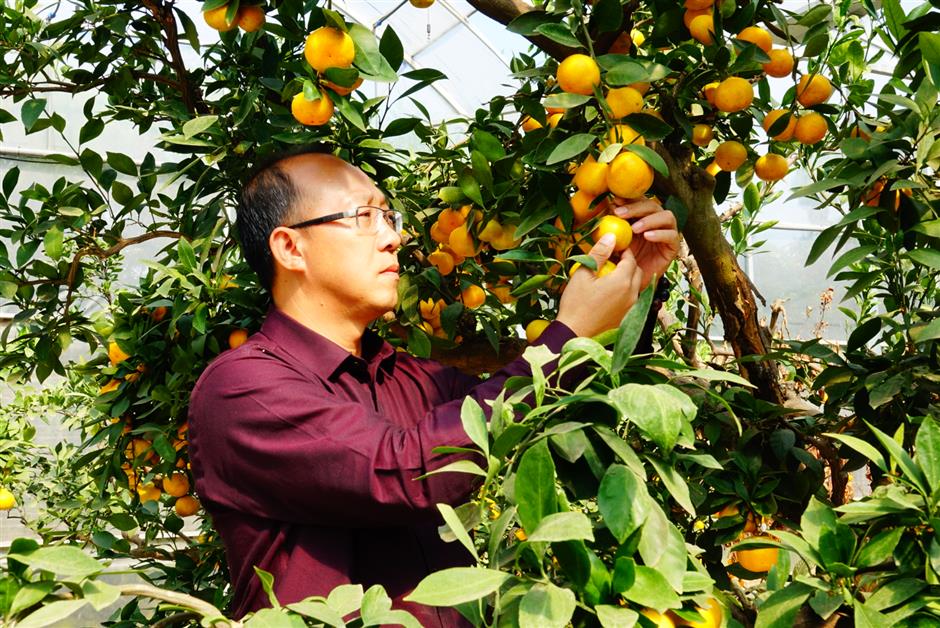 Huang Guili works in his orchard. 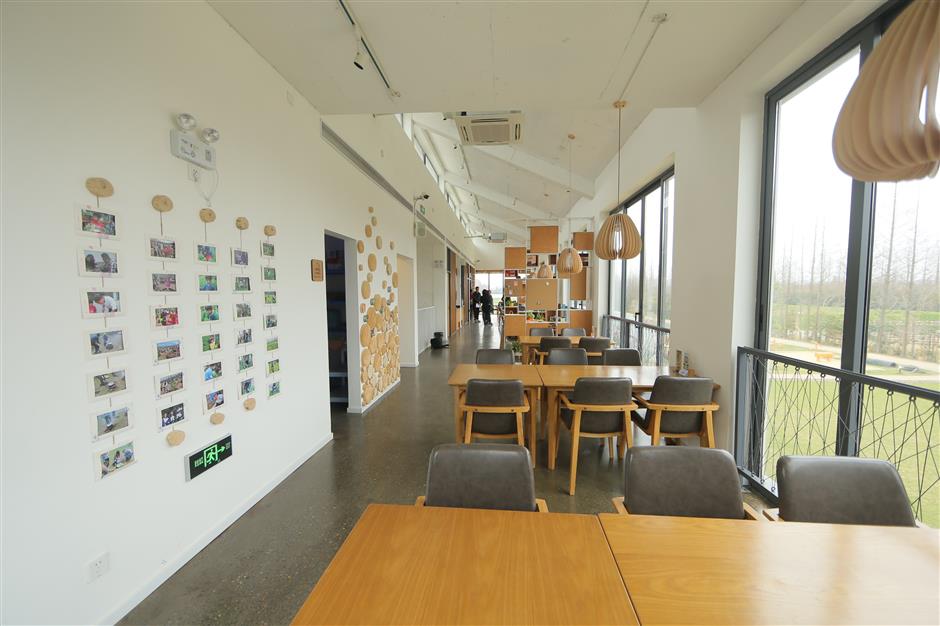 Huang’s tangerine farm is hardly stereotypical. With large glass windows everywhere, it is equipped with modern facilities to mesh comfortably with surrounding nature.

Shen and Huang share a hope that the application of modern technology will attract more young people to modern agriculture. “For a long time, we had ‘industrialized agriculture,’ which meant quantity over quality,” Shen says.

“So farmers used whatever methods they could to boost production. Now it’s different. New technologies can be easily applied by farmers, and consumers are starting to care about the safety and quality of food. Things are changing but not fast enough,” he adds.

In its 13th Five-Year Plan (2016-20), Shanghai government spelled out its ambition to turn Chongming into a “world-class eco-island.” According to the plan, Chongming will become a showcase of “green development, culture, intelligence and sustainability” by 2020. It may well accelerate the transformations Shen, Huang and many others are hoping to see.

“Urban agriculture, like farming in suburban areas in big cities like Shanghai, is different from the traditional way of farming,” says Huang, an urban planner for more than 20 years. “It is aimed not only at fulfilling the need for food production, but also at providing local residents and urban consumers with a deeper understanding of how our daily lives relate to nature.”

Like many modern farms in suburban Shanghai, Huang hosts workshops that are especially popular among families with children. Visitors can see how crops are grown organically and come to understand how somewhat higher costs of food are worth the knowledge that what we eat is safe and nutritious.

“The idea of sustainable farming depends heavily on consumers becoming more eco-minded,” Shen says. “We have forgotten the nature of agriculture. It is to supply nutrition and make you healthy. But consumers are typically driven by taste and price. For many years, most consumers have placed a higher priority on taste and low price than on quality and nutrition.”

He cites the example of rice. Its taste depends on its variety. Consumers can’t detect chemical fertilizers or pesticides used to produce the food they eat. Rice may taste better when harvested at its first signs of maturity, but it will have higher nutritional value if the harvest is delayed a week or 10 days, he says.

“We try our best to balance both considerations,” Shen tells Shanghai Daily. “Demand dictates supply. The more consumers choose quality and nutrition, the more farmers will be willing to use organic and sustainable farm methods.” 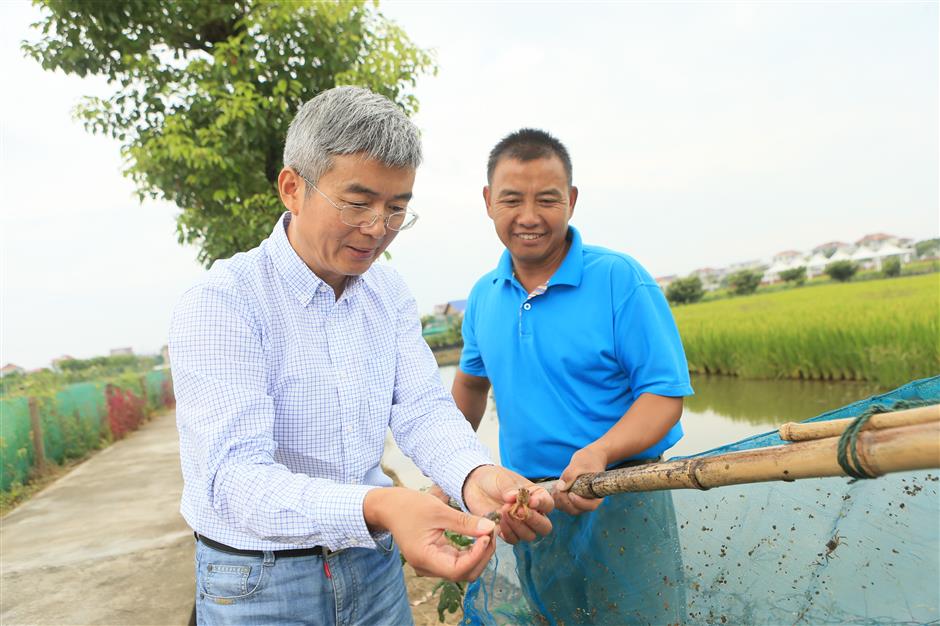 Shen Hong (left) works with a local farmer who wants to learn eco-agricultural methods that benefit the land and also his pocketbook. 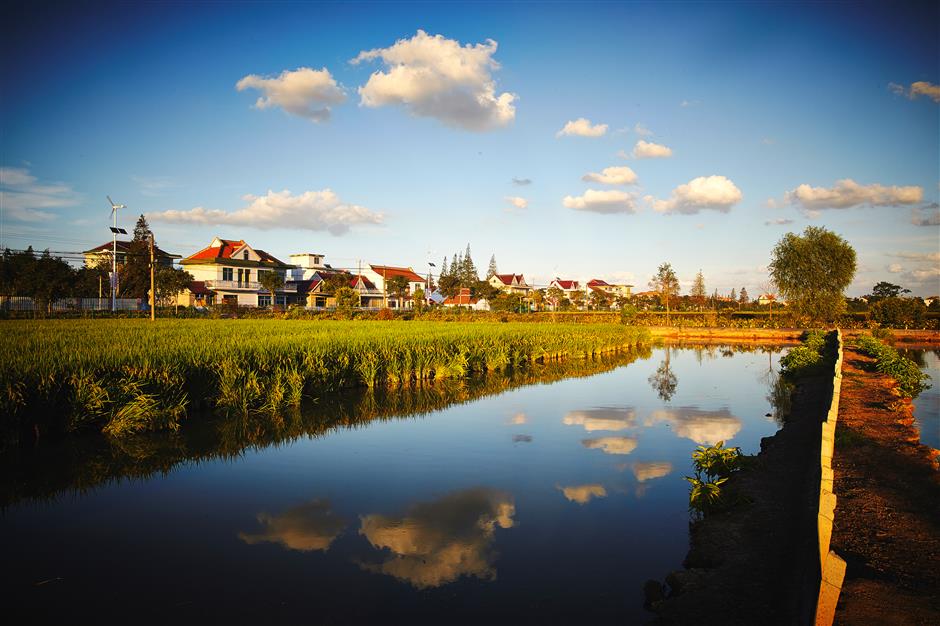 One of Shen Hong's farms, located in Xianqiao Town on Chongming Island, presents a bucolic scene of man and nature existing in harmony.

Shen’s rice paddy-cum-turtle farm is adopted from a traditional old method popular in rice terraces in areas like Zhejiang and Yunnan provinces since the Han Dynasty (206 BC-AD 220). Ancient farmers fully utilized the natural environment to save space and produce better fish and rice.

Shen chose to farm crayfish, crabs and turtles for several reasons, including the need to detect chemical fertilizers and pesticides.

“Crayfish and crab are super-sensitive to chemical fertilizers and pesticides, especially when breeding, so if crayfish can breed in this rice paddy, it means no pesticide is used at all,” he explains.

“It is a great micro-ecological system because what drops from rice plants are natural fertilizers,” he adds. “The fish, crayfish and crab are food for pancake turtles, the farm’s most profitable product.”

In addition to his own farms, Shen has partnered with local Chongming farmers who are willing to adopt sustainable methods. In the beginning, it took a lot of effort to persuade them to try a new approach. His partners now include veteran Chongming farmers and young urban talent.

“They were so used to the idea that the more, the better,” he says. “But now, many local farmers are discovering that sustainable agriculture produces higher-quality crops and turtles, and they can actually make more money.”

Over the past 14 years, Shen says the environment on Chongming Island has improved a lot, especially water quality and forestation.

“The key is to have everyone understand the ecological environment,” he says. “It is not only about having many trees. It is about biodiversity — how many species you have in the environment. Biodiversity provides a natural cycle. To take care of one aspect, you have to take good care of all aspects.” 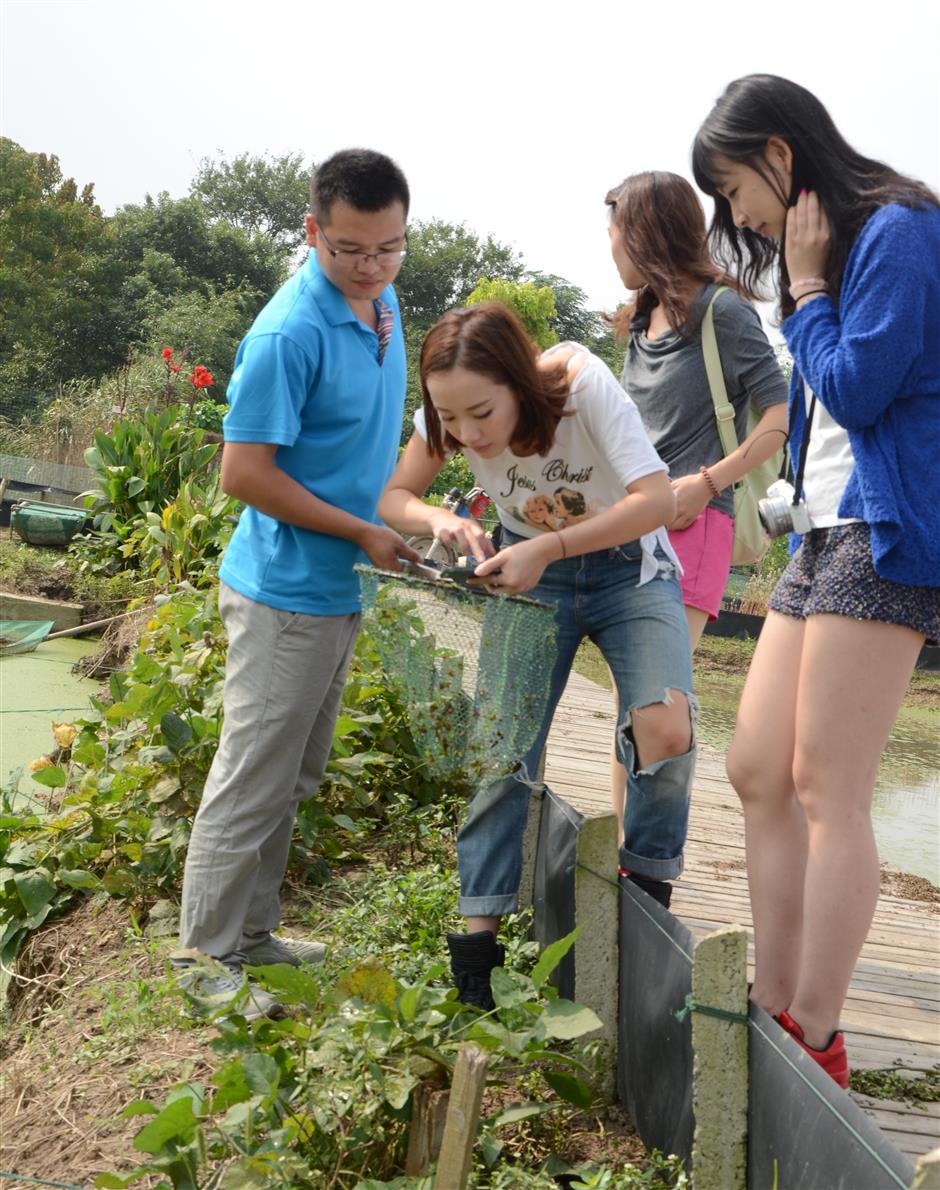 Organic farms are popping up in villages on the outskirts of Shanghai, as both consumers and farmers begin to appreciate the benefits of healthier, more nutritious food grown without pesticides and chemical fertilizers.

Huang Guili’s tangerine farm on Changxing Island in Chongming District has not only bred a new variety of tangerine with an edible peel, but it has also created a bucolic, romantic environment that dispels the stereotyped image of traditional farms.

The farm itself is inside a nature reserve. It is abundant with tangerine groves, colorful vegetable gardens, natural fishponds and an array of native, wild plants. Birdsong and the fragrance of flowers greet people at dawn, and a chorus of frogs caps the day at dusk.

The farm has a restaurant with large glass windows that look out over the area. The atmosphere resembles a chic café in downtown Shanghai. All dishes are made with food grown on the farm. Workshops are regularly held to demonstrate organic cultivation and even give visitors the chance to make tomato juice and tangerine jam.

The farm’s shop sell products produced there, with the tangerines the star attraction. Also popular is homemade soap made with tangerine oils.

Shen Hong’s rice paddy-cum-turtle farm adopts a simplistic style of returning to nature. Located in Xianqiao Town on Chongming Island, the farm is surrounded by local houses and land and doesn’t stand out at all.

Visitors can enjoy dishes made from the farm’s own produce, including rice, seasonal vegetables, fish, crayfish, crab and pancake turtles. The farm also offers cabins for overnight stays. They are basic but neat and well-equipped.

The farm holds workshops for the public, which are popular with families. Children can learn about vegetables, rice growing and aquaculture.

Heping Village in Jinshan District has forged a different route to eco-farming by revamping existing farms instead of creating new ones. The village, famous for its peaches, now embraces green cultivation methods in its orchards.

In 2012, the town was honored as “exemplary” village. Its Jinshan peaches and Yangchuan noodles, watermelons, figs and onions are so prized that many Shanghai residents drive out to the village on weekends to buy produce and enjoy an outing in the countryside.

In an effort to attract more visitors, the village has opened a 24-hour food market and created a shopping street.

How to get there: Take Metro Line 1 to Lianhua Road Station and transfer to bus Lianzhu Line (Lianhua Road to Zhujing) and then Zhuqianwei Line. 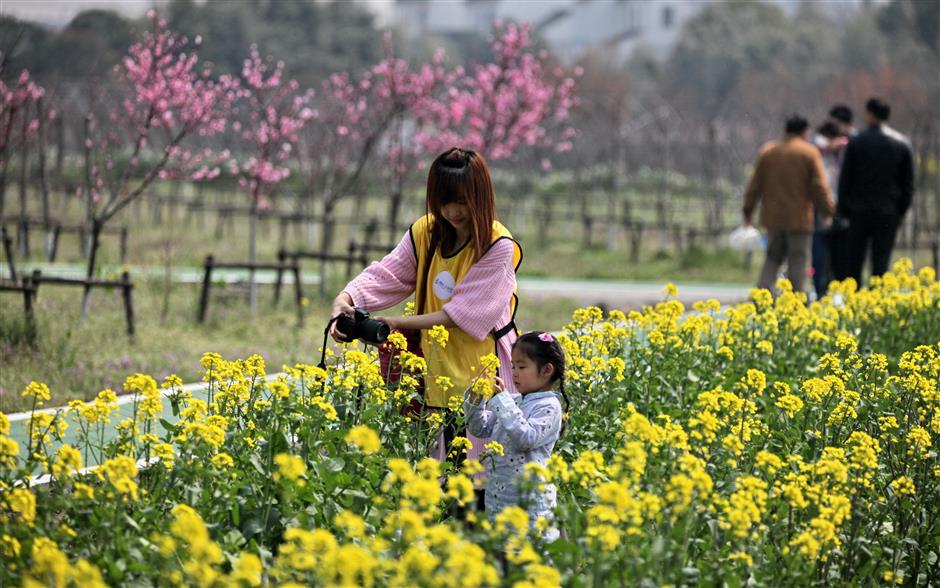 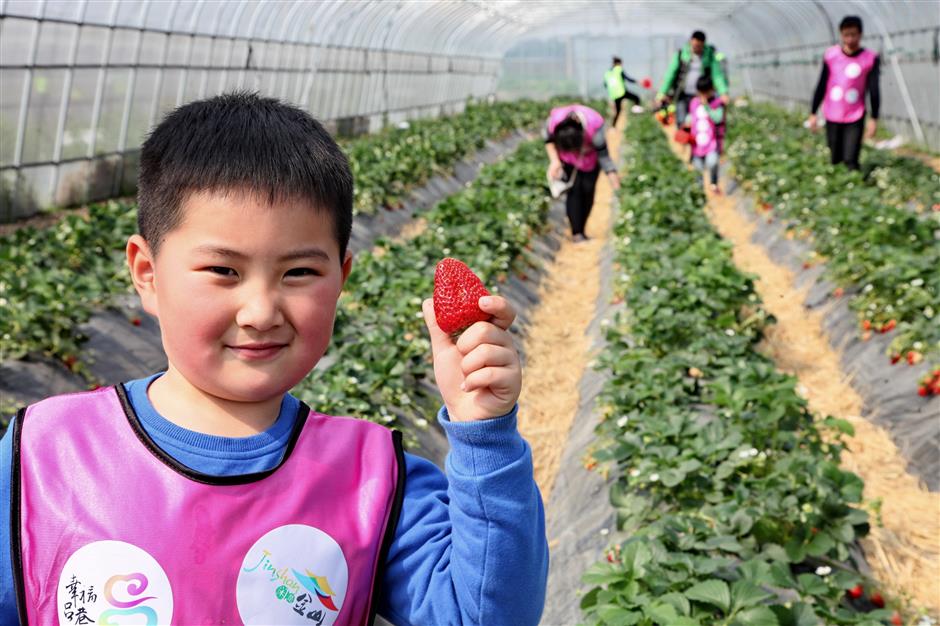 Heping Village is one of many becoming more ecologically aware. 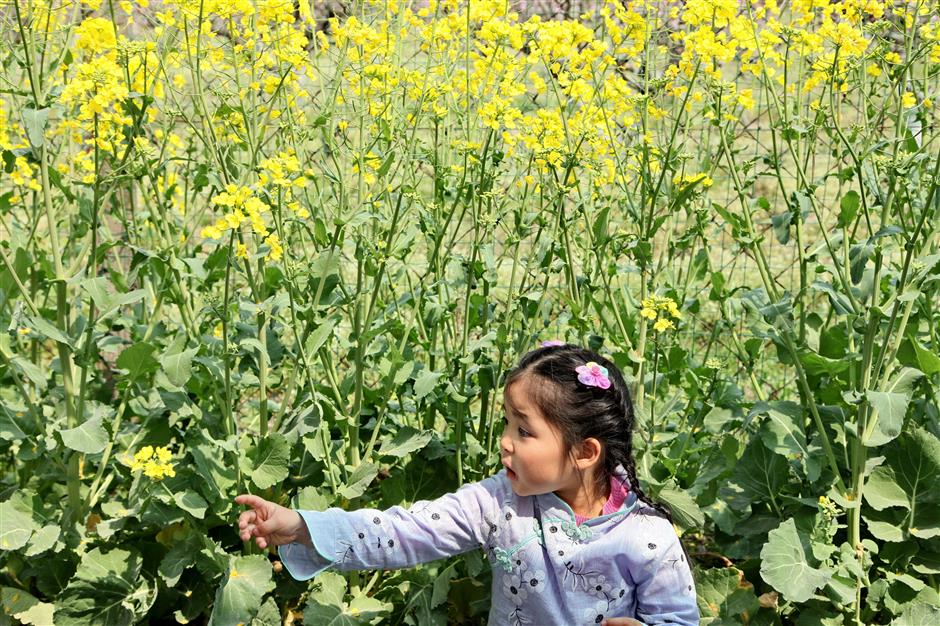 Special Reports
ADVERTISEMENT
61798
,
Guide for overseas Chinese students during COVID-19 pandemic
A cemetery that celebrates life and death
Nile threatened by waste, warming, dam
Enchanting abode in idyllic tranquility
Connecting nature, culture and people with design
Fancy footwork: An embroiderer finds her niche
How overseas Shanghainese go through outbreak
Counseling eases psychological toll of outbreak
'Support troops' guard the doors to the city
A guardian of the light ... and of hope for Wuhan
EXPLORE SHINE