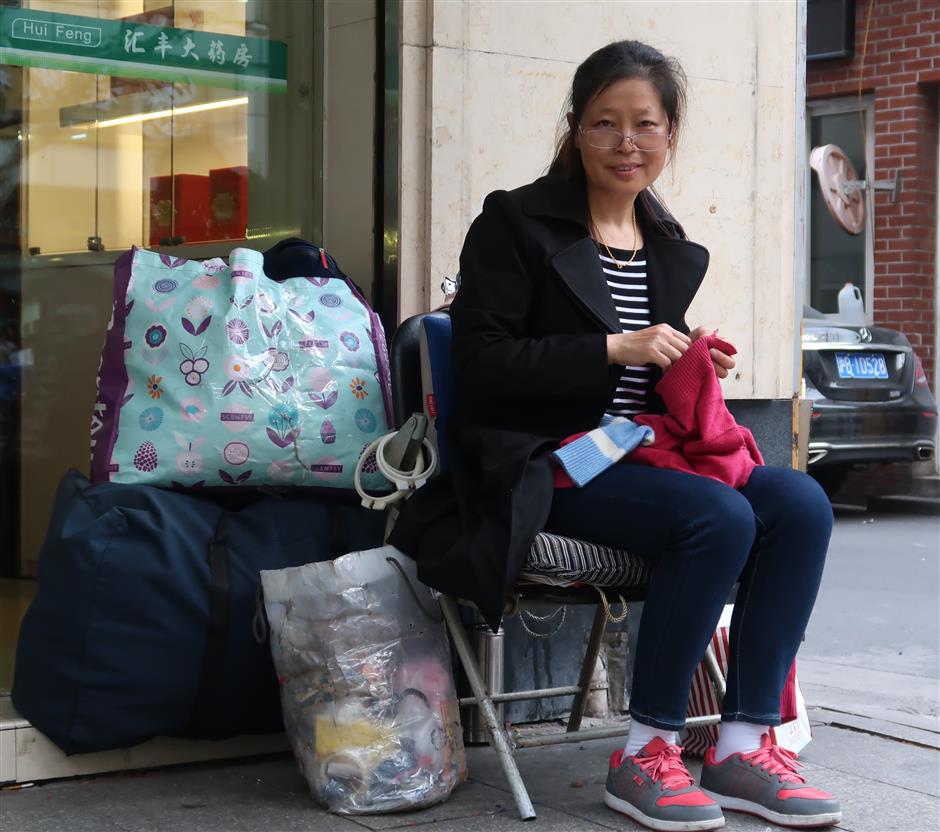 Cao Shuhua, a native of Anhui Province, has been patching clothing for people for 26 years in Shanghai's Xuhui District.

Every day for the past 26 years, Cao Shuhua has been patching clothing for people from a small stall on Tianyaoqiao Road in Xuhui District, weather permitting.

Her booth, which consists of a chair amid bags of clothes, is opposite the Huilian Department Store (40 Tianyaoqiao Road). Cao, 47, a native of Anhui Province, works from 9am to about 6pm every day.

She can repair nearly everything seamlessly — sweaters, shirts, suits and fabric purses. She learned sewing and crocheting from her mother.

“The seamless repair of clothes is a skill passed down from generation to generation in my family,” Cao says. “My grandmother learned it from her mother and then taught it to my mom. My mother had a similar booth to mine back in our hometown before she retired.”

Most of Cao’s customers are regulars who have been patronizing her booth for years. Many have become friends. They take clothing to Cao, and she phones them when the work is done.

Dealing with dozens of garments a day, she sometimes makes mistakes, like forgetting orders until customers call to ask about them. Customers, however, are quite willing to overlook such lapses because Cao is always so kind and cheerful. Even when she fails to get repairs done at the time promised, they forgive her.

“I have known many of them for more than a decade,” Cao says. “We often joke with one another, and no one takes anything too seriously. But I do the best work I can for them.” 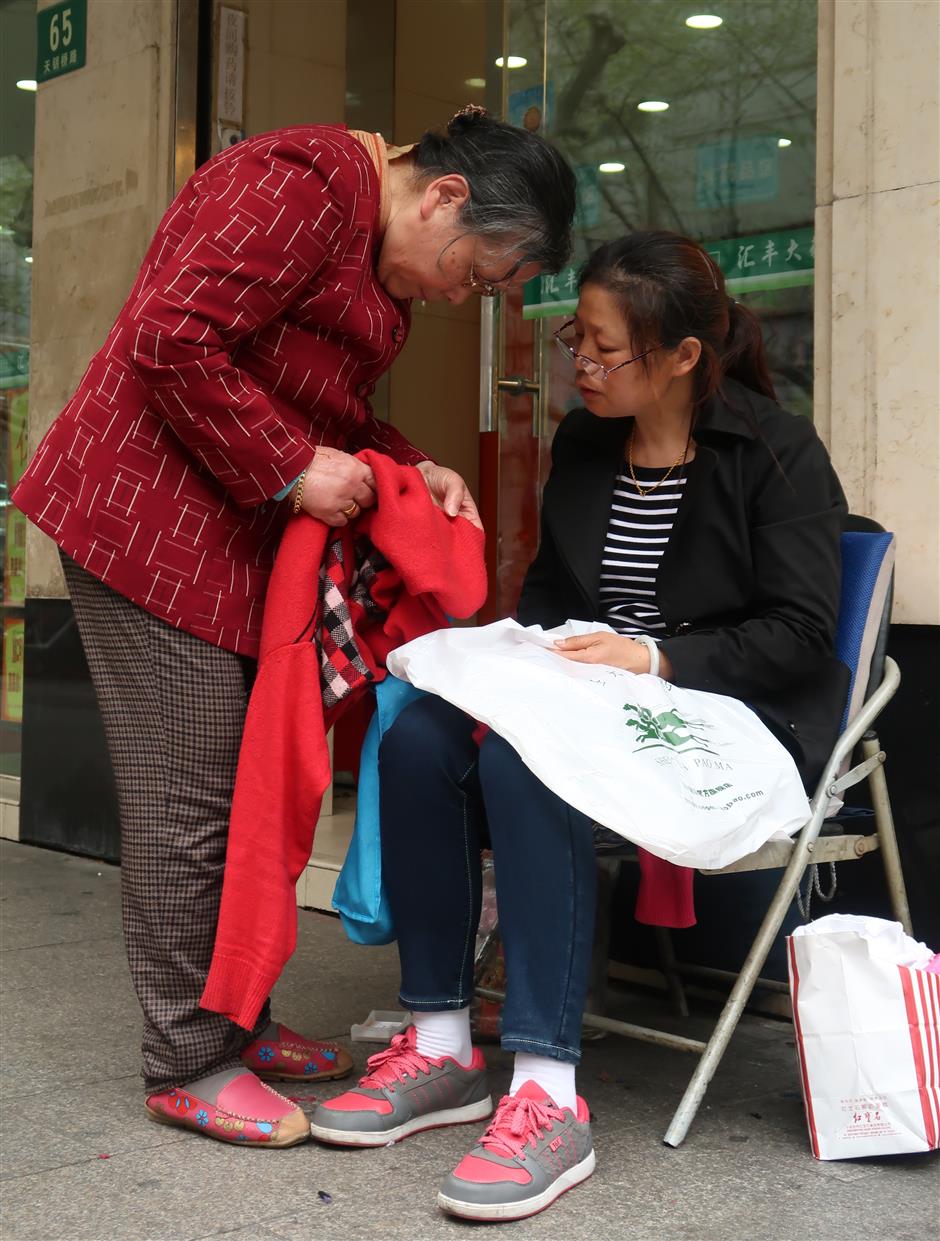 The secret to seamless repairing is in extracting threads from a garment to use in its repair. Cao mends the holes with adept crocheting skills. Wool sweaters are the easiest to repair, while silk shirts are the most difficult because “the threads are too thin,” she says.

Cao’s expertise has built a reputation far beyond her small booth. Her skills have been so highly praised by customers online that she has received orders from overseas.

“Some people send their clothes and handbags, many of them luxury brands, from as far away as the United States. I send them back when the work is done,” Cao says.

Customers are always amazed when they receive the repaired garments. It’s impossible to find where the holes were.

“I bought a knitwear garment and found that it had a hole in it even before I wore it for the first time,” said a user calling herself “Meowing Cat” on Dianping.com, a Yelp-like website in China.

“I went to the store to complain, and the staff there said they couldn’t do anything about it,” said Meowing Cat. “They recommended I take the garment to a lady surnamed Cao on Tianyaoqiao Road. I went there and she got the hole mended without a trace within five minutes. It was magical!”

Cao says her career began in a rather boring way. She is the youngest of seven daughters in her family.

“My sisters were either unwilling or unable to master the skill,” she says. “So when I was around 11 years old, my mother started to teach me how to repair clothes, whether I wanted to or not.” 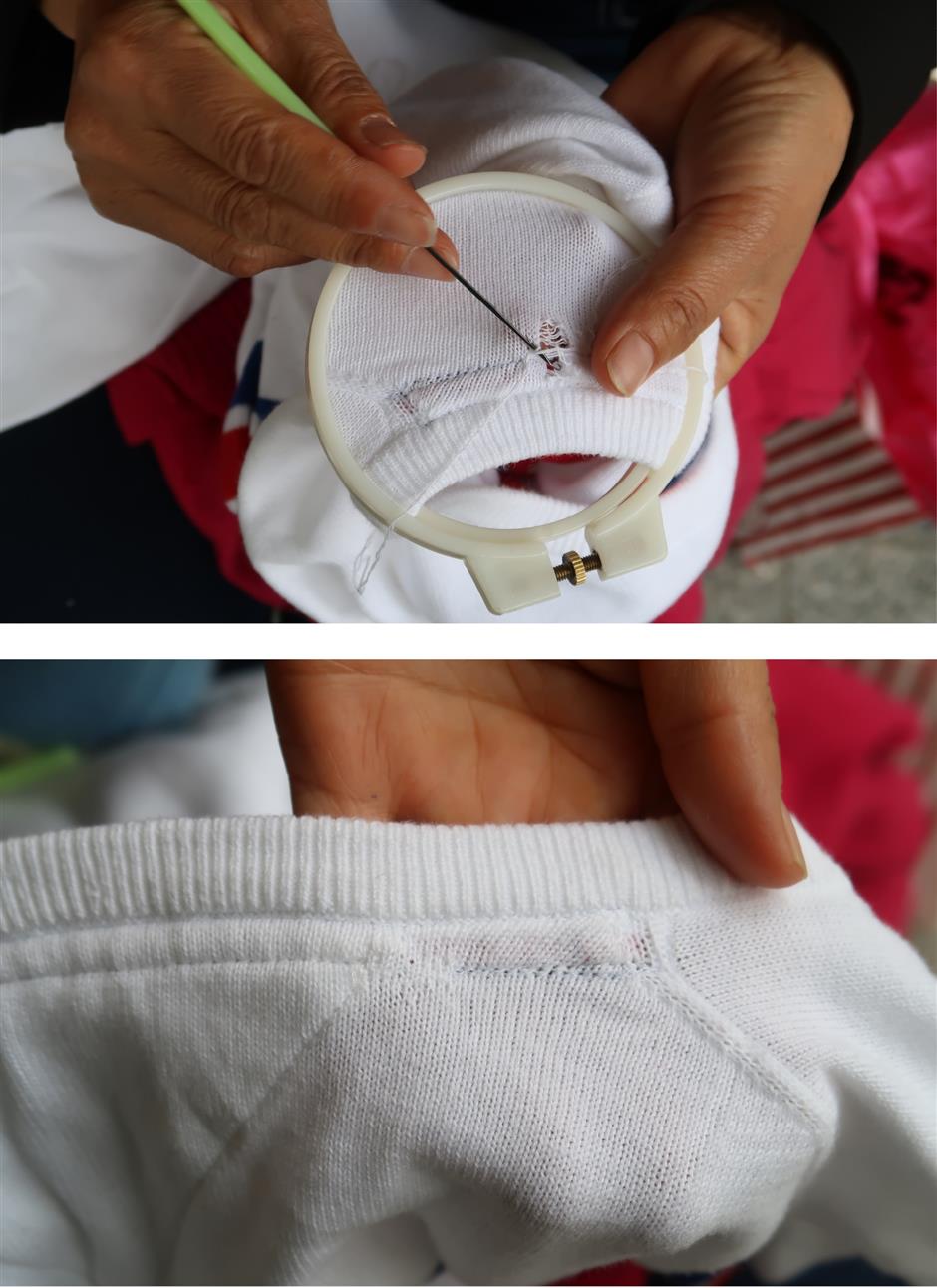 Cao spent three years practicing before she could do the work all on her own. She says it helped that she learned the skill when she was young.

“At that time, I didn’t have much to do other than going to school,” she rcalls. “If I had been older, I might have been distracted by other things.”

At the age of 21, Cao decided to come to Shanghai to make a living.

“Repairing clothes is a business more needed in big cities than in small towns,” she says. “And there is no better place than Shanghai.”

For the same reason, she picked the Xujiahui area to work.

“I heard that this is the best area in the city, so I thought its popularity would help me get ahead in business,” she says.

But it wasn’t easy at the start. For the first year, business was slack. Cao worried that she wouldn’t be able to support herself and would have to find some other work. Fortunately, she stuck it out. Business began improving in the second year.

Cao has witnessed many changes in Xujiahui. Avenues got wider. Numbers of stores increased. People grew up, left and then later came back with children.

“One day a little girl of about 9 years old, whose mother was a long-term customer, came to me and said, ‘Auntie, why are you still here’?” Cao recalls. “It made me realize just how long I had been here.” 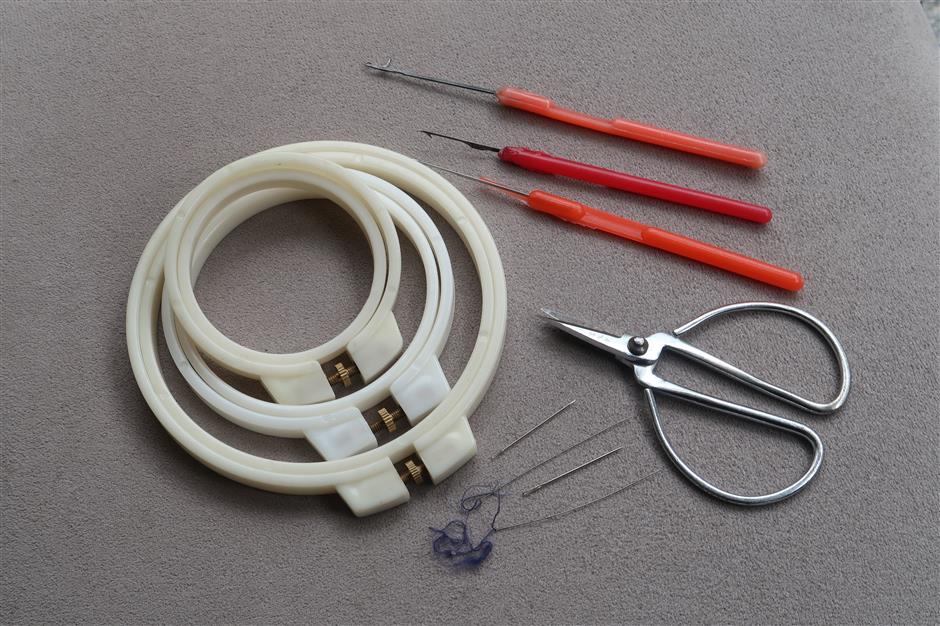 But Cao has no complaints. Her business has created a social circle around her. Urban management officials are lenient about her business, though booths such as hers are technically illegal in the area.

“When they come here, I simply stuff all the clothes in bags and just sit here on my chair,” she says. “They know what I’m doing, but they don’t chase me away. Some of them are even my customers.”

Cao has developed her work into a family business. She has taught repairing skills to her husband, her eldest sister and her niece. The three of them have also set up booths in different corners in the city: one in Huangpu District, one in Jing’an District and one in the Pudong New Area.

Cao’s son, however, shows no interest in the family business.

“He is in university, and I never have assumed he would be willing to take up crochet needles,” she says.

Cao says she expects to work for another 10 years before retiring. The work hurts her eyes and strains her neck, and she fears her eyesight will worsen as she ages. 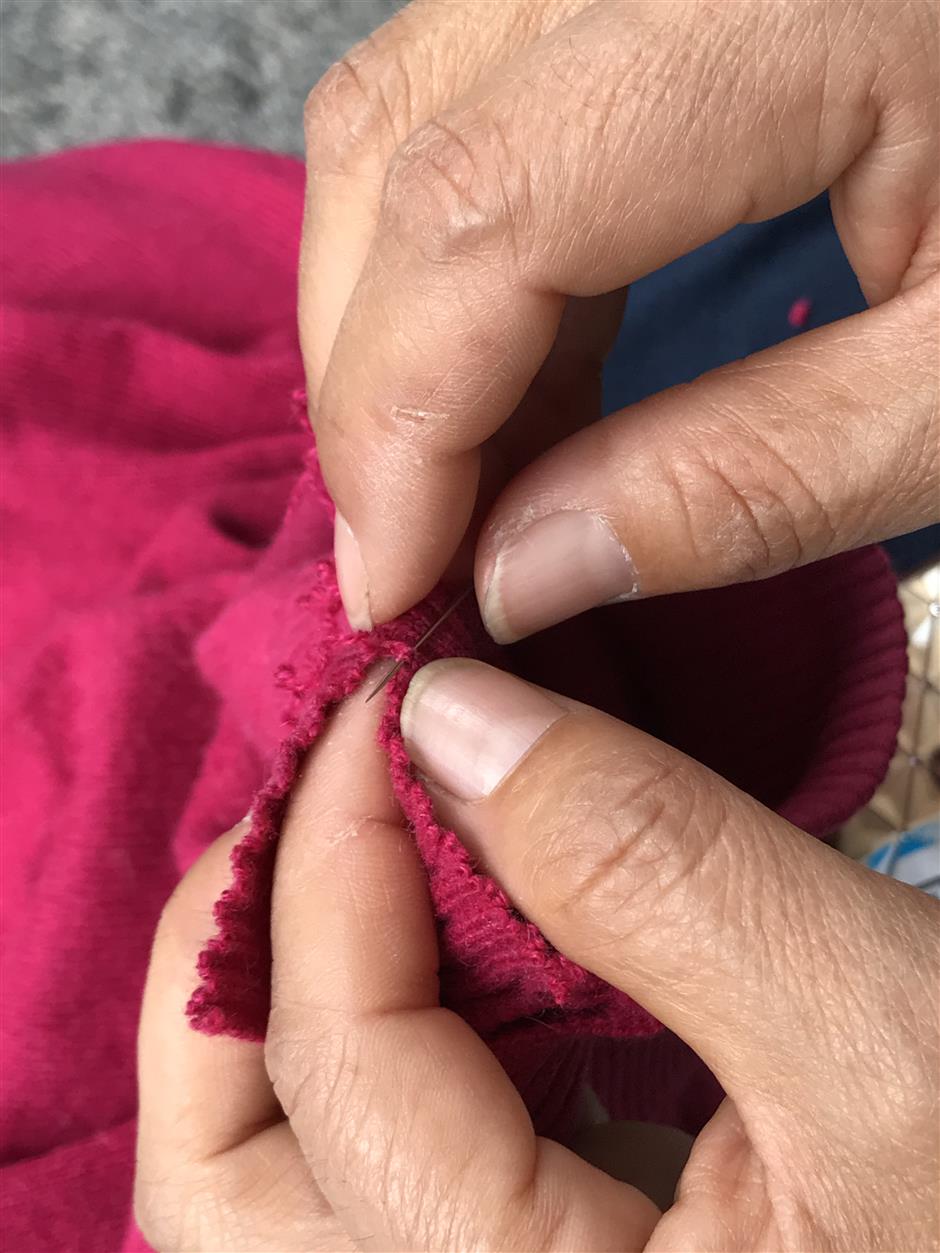