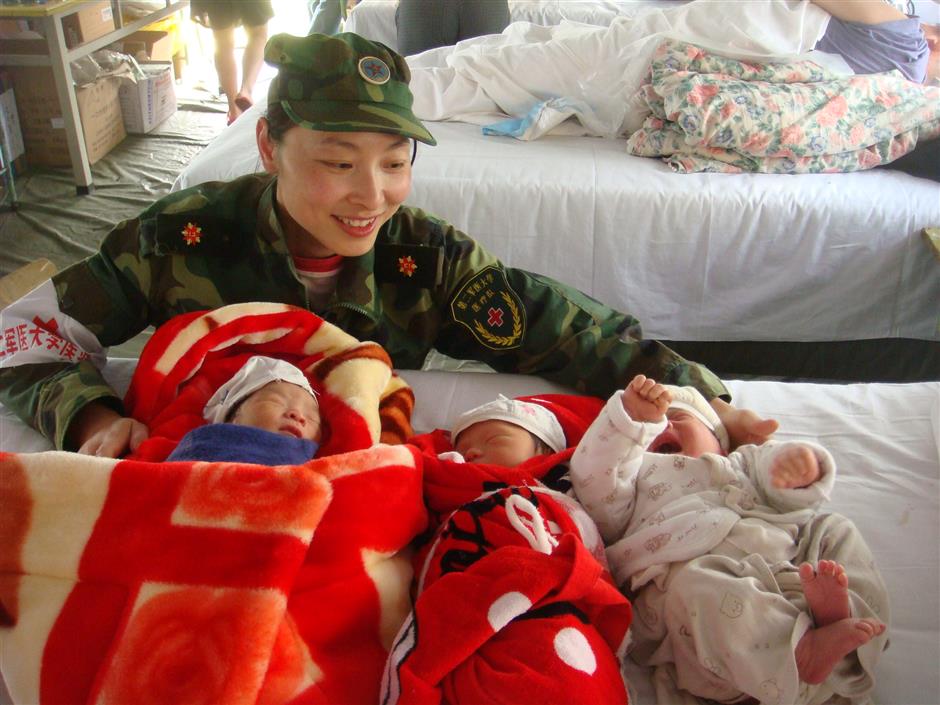 Liu Xiaojun, associate chief physician from the department of gynecology and obstetrics at Changzheng Hospital, delivered seven babies during her two months in Wenchuan.

Medical teams that responded with haste to the 2008 earthquake in Sichuan Province were among the heroes of the day. Even 10 years on, their efforts and dedication are honored with gratitude.

One of those volunteers was Liu Xiaojun, associate chief physician from the department of gynecology and obstetrics at Changzheng Hospital, which is affiliated to the Shanghai Second Military Medical University.

Liu spent two months in quake-devastated Wenchuan County, where, among other feats, she delivered seven babies. All the newborns were called “Changzheng baobao (babies).”

“Though it was 10 years ago, we still have clear memories of the disaster,” Liu tells Shanghai Daily. “The earthquake was tragic. But amid all the death and destruction, new lives began.”

“We delivered six boys and a girl,” she says. “Previously, our work would have ended with the births, but under the circumstances, we had to do more post-natal care.”

One of the boys was delivered by Caesarean section after the mother was unable to do a natural birth.

The mother was only 20 years old and had no idea what to do. She and her equally young husband had lost everything in the earthquake. The medics used their own towels to wrap the newborn and then taught the couple how to feed the baby and change diapers.

The most breathtaking arrival was the last baby, a newborn girl. The medics nicknamed her Qixiannu, or “seventh nymph.”

“I remember the day,” Liu recalls. “It was raining heavily, and there was a risk of a levee failure on a nearby lake.”

When the mother and her husband arrived at the medical station, they were anxious because amniotic fluid had been flowing out for two hours and the baby was still.

Liu says she has kept in touch with the parents and organized help for the family when the father was later severely injured in a car accident in 2016.

“We donated money and household goods to them,” she says.

Liu is humble about her role in rescue efforts. “It was our duty,” she says. “We are soldiers and also the medics, which brings us a stronger sense of mission.” 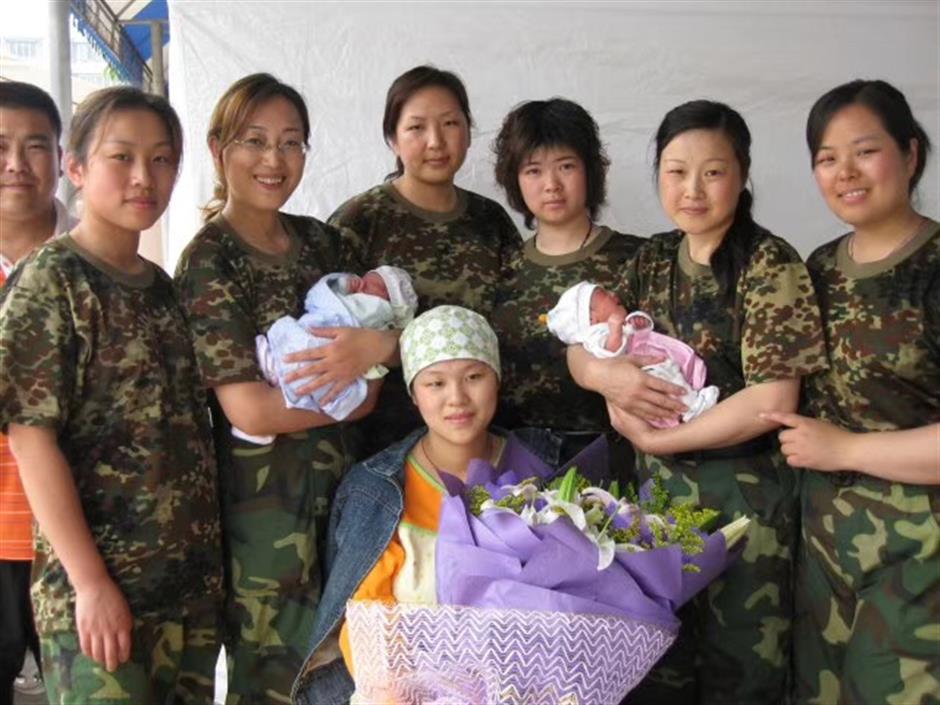 Hu Dian (second from right), an obstetrician and gynecologist at Changzheng Hospital, helped with the delivery of several "Changzheng babies" in the earthquake. Two of the newborns were twin boys named Ning Jun and Ning Zheng.

“When we were aboard the air freighter taking us to the scene, there were concerns about landslides, and there were risks associated with landing,” she says. “I had a feeling that my life was uncertain for the whole time I was there. For example, if the levee broke, we could have been washed away by flooding.”

However, the warm welcome of the Sichuan survivors lifted their spirits. Local people brought them eggs and millet congee.

Ren Yusheng, a chief physician of cardiovascular medicine at the hospital, recorded his experiences in texts sent to friends, which were later compiled into a blog entitled “Diary of a Disaster Relief Military Surgeon.”

Besides providing medical services, Ren’s team made routine visits to elderly survivors to ensure their health and safety. One team of eight medics even climbed over a mountain to rescue an injured person.

“The people in Sichuan had strong minds and a positive attitude toward life, even amid such disaster,” he says. 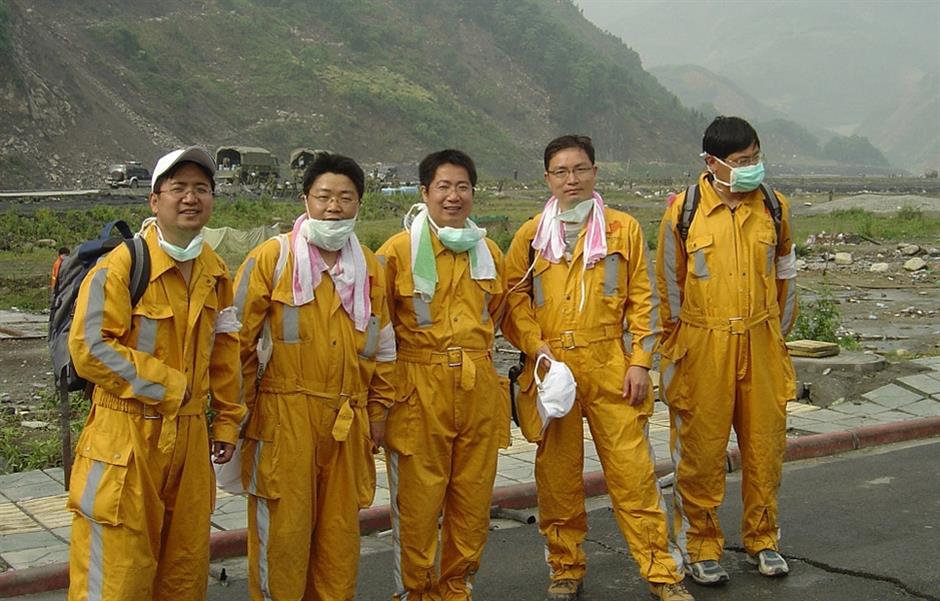 Shanghai No. 6 People’s Hospital, renowned for their orthopedics department, dispatched teams to Wenchuan to tend to survivors who suffered fractures.

Besides Changzheng Hospital, the Shanghai No. 6 People’s Hospital also dispatched teams to Wenchuan after the earthquake. Renowned for their orthopedics department, hospital staff primarily tended to survivors who suffered fractures.

The hospital set up special wards in Shanghai to receive some of the more severely injured from Sichuan and tapped staff who could speak Sichuan dialect.

A 46-year-old woman surnamed Yan, who suffered rib and pelvis fractures, was pulled from the rubble and later transferred to the hospital for surgery.

The Shanghai hospital also worked in cooperation with the Hefei No. 1 People’s Hospital in treating patients.

The disastrous Wenchuan earthquake in 2008 touched hearts around the world, with many countries offering aid to China. Germany was one of them.

The supplies and materials for the mobile hospital were delivered by cargo plane with 11 professionals sent by the German Red Cross.

It was up and running within 52 hours thanks to the German experts and the medical teams from Shanghai’s Huashan Hospital, Obstetrics and Gynecology Hospital and the Children’s Hospital of Fudan University as well as local medics and volunteers.

Consisting of 25 tents and 120 beds, it provided most of the essential medical facilities, such as an emergency room, an X-ray theater, a laboratory, a pharmacy and departments of internal medicine and surgery. The hospital could be moved anywhere as needed.

The facilities included high-tech machines, such as an oxygen generator which replaced traditional oxygen bottles, transforming air to oxygen directly and adjusting the concentration.

Ding Qiang, president of the Huashan Hospital, says the mobile hospital treated more than 70,000 people and was like a “Noah’s Ark” in the disaster area.

Huashan Hospital’s Li Yanfei, who worked at the mobile operation, recalls some details of the medics she worked with.

After working at the hospital for several days, a young man who was sent there coordinating disaster relief issues told them that his hometown was Shifang, an area which was badly hit by the quake.

Although he really wanted to return home to see his family, he decided to stay. 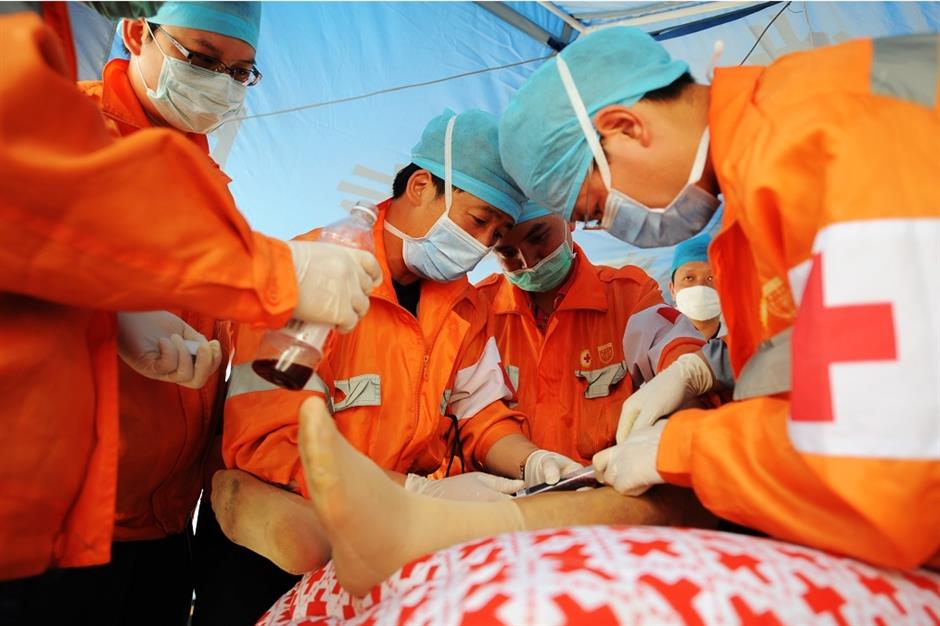 Doctors of the Huashan Hospital Rescue Team performed a surgery on a patient in the quake-hit area.

And a doctor from the Dujiangyan People’s Hospital jumped up from his chair every time there was a vehicle passing by.

He said any shake reminded him of the afternoon when he lost his house and a family member.

Despite that, he set aside his own grief and continued treating patients.

Several college students from Chengdu volunteered to be translators to help the medics communicate with the German experts, and each single trip took them nearly two hours.

Li says for those at the scene, these are not only a few sentences on paper but a history they all experienced and are proud of.

One touching story from the hospital’s operation is about the first baby delivered there.

When the mother was sent to the hospital, her amniotic fluid was flowing out and she required a Caesarean.

Due to the shortage of blood, the medics lined up outside the operating room and were ready to donate blood at any time. Her son was finally delivered safely, and his father named him Zhongde, which means “Chinese-German.”

Liao Shuyi from Huashan Hospital, who witnessed this incident, tells another part of the story. The surgeon performing the operation was a mother of a young girl. Before performing the C-section, she received a call from her daughter, saying she wanted to spend the next day — Children’s Day — with her mother.

The mobile hospital treated about 72,000 patients in the three months after the earthquake, forging strong bonds with the people of Sichuan.

Although a decade has passed, for all the medics who left their families and risked their lives to help in the earthquake-stricken area, this memory is unforgettable and the experiences live on strong in their lives. 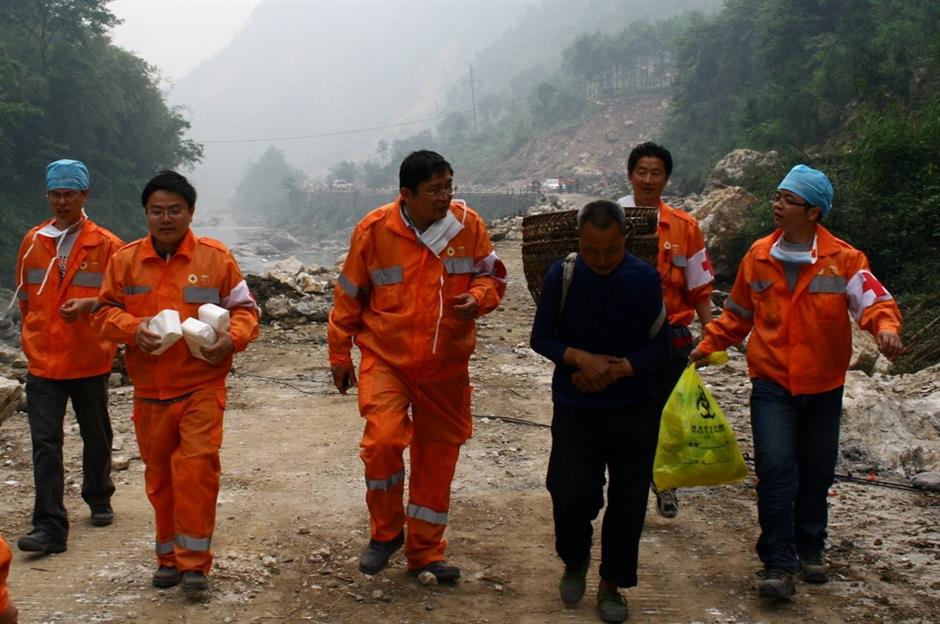 Staff of the Huashan Hospital were never tired of treating the injured in the disaster zone.