Cao Xiuwen, a woman in her 60s, scrolls out her latest painting capturing the highlights of the nearby Fengjing ancient town, as another piece depicting a young girl who picks herbs hangs behind.

Cao’s most famous piece won first prize at a national competition in 1977, shortly after the high school graduate returned to her hometown in Zhonghong Village in Shanghai’s rural Jinshan District, working on the farm to pick herbs and drawing during short breaks.

That was when Cao and dozens of others in her village became known as “farmer painters” — they were all from families who had worked on the land for generations and painted in their leisure time.

Today, hundreds of farmer painters, also known as “farmer Picassos” for their bold use of colors, are among the district’s most famous attractions. Many reside in the same village as their families had lived in and farmed for generations, like Cao. The village and county have changed dramatically, and so have their lives as farmer painters.

Cao no longer works on the land.

She leased it out in the late 1980s and early 1990s when she was determined to make a living by painting. She is now a famous “farmer Picasso” who has returning clients, holds workshops and is invited to seminars around the world. But it hasn’t always been easy.

In the 1970s, the artwork by farmers and workers was promoted as art for the masses, and many villages around the country tried to find talented farmers after farmer paintings from Shaanxi Province’s Huxian County earned national and international fame at an exhibition in Paris. Many professional artists were sent to rural areas to experience life and learn from farmers so that they could create works that resonated more with the people. 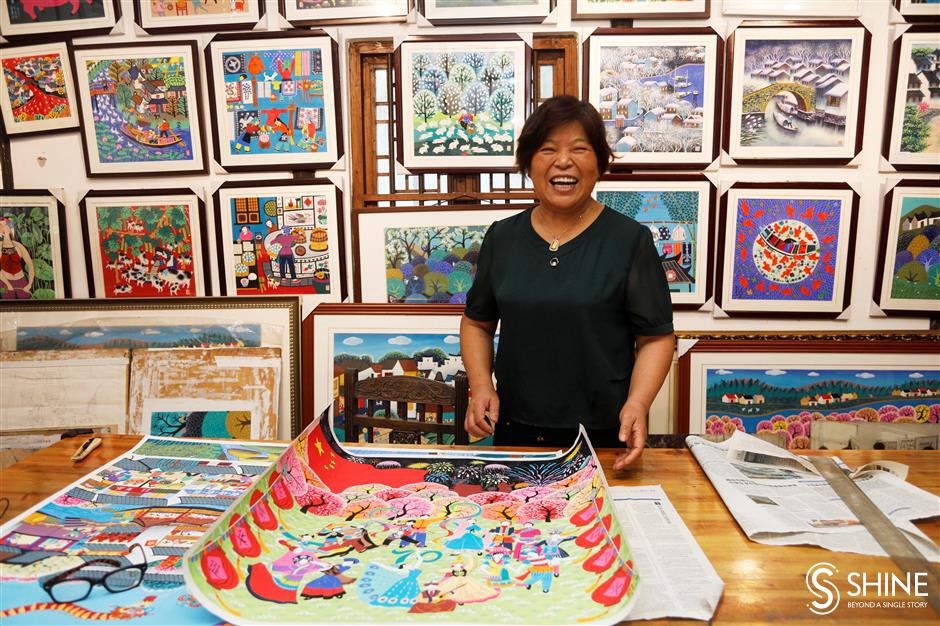 Cao Xiuwen with her paintings

“In a farmer’s family back then, most women did some embroidery on the side to increase the household income, so did my mother, and I probably got my art gene from that. I loved drawing since I was a child, but we were poor, so I drew on the floor and on the walls with bricks,” Cao recalled.

“When these great masters were sent to our village, the villagers who already liked painting were even more motivated. The masters saw our paintings, which were amateur, unskilled, but different and more vivid from what they usually saw from trained students.”

One of these painters was Wu Tongzhang, who took Cao as his student and asked her to find more talent from among her villagers. Cao immediately thought of all those women who were good at embroidery and passed on what she had learned from Wu.

Most of the time, they were still working as farmers for the community, and the talented ones took turns to paint at government-supported workshops, where their creative works were also counted as the community’s achievements. Even when she was not painting in the workshops, Cao took a notebook with her to the farmland, and did many drawings during breaks — putting on paper what she saw on the land such as her neighbors farming, harvesting, enjoying a break or learning from books in the field. 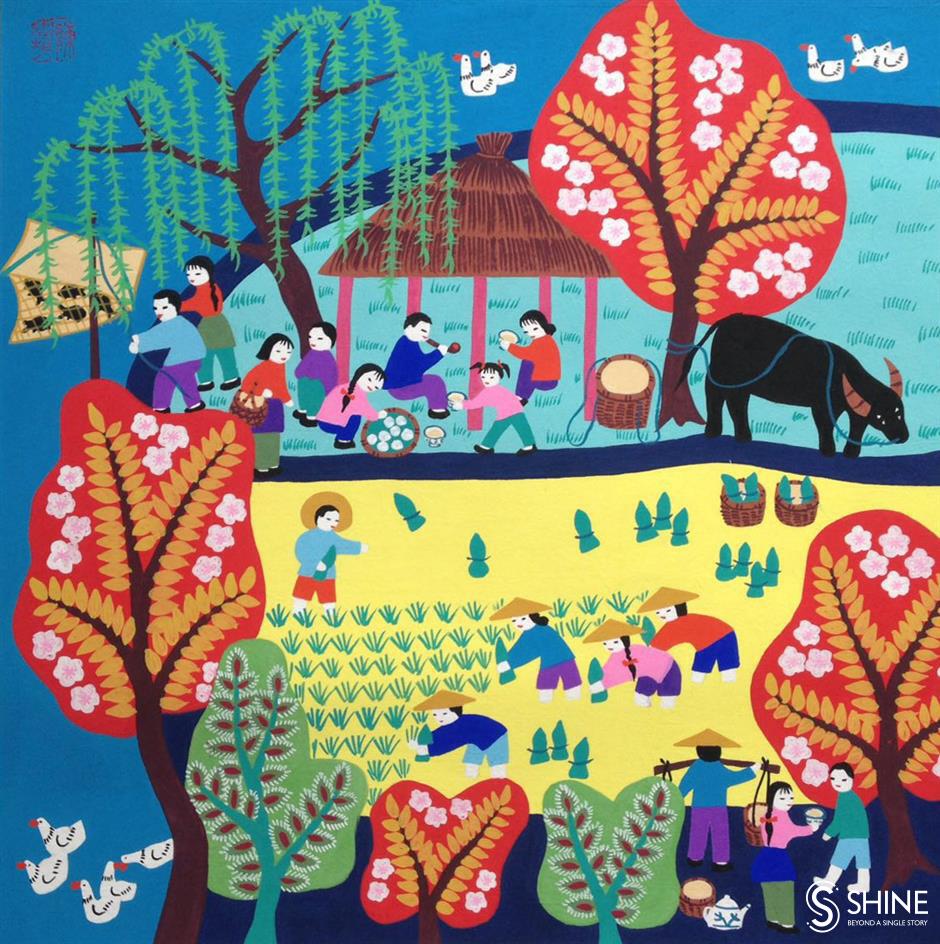 A piece of painting by Cao Xiuwen, one of the farmer painters, also known as “farmer Picassos” for their bold use of colors

Cao still remembers when she was awarded 50 yuan (US$7) for the piece depicting a young girl who picks herbs. In 1977, the annual income of her entire family was less than 300 yuan. She also vividly remembers her first visit to Beijing to receive the award.

“I passed by the restaurant that sold Peking duck. It smelt so nice but back then, all I could afford was eating pancakes every day,” said Cao. “I said to myself that I would eat Peking duck every day if I could sell my paintings one day.”

It didn’t take too long. Cao’s paintings, with other farmer paintings from her fellow villagers, were subsequently exhibited around the country and sold — initially mostly to foreigners who came to visit in the 1980s. In 1991, Cao visited Beijing again for a cultural and art conference, and ate Peking duck every day.

“It sounds silly now,” Cao laughed. “But I was so happy — dream realized.”

By then, she was no longer working on the farm but still had stories to tell.

“I drew what I saw and what I was familiar with — that used to be farm work,” Cao said. “Now I no longer work on the land, I still draw what I’m familiar with. The scenic views in the much-changed town or other places I visited, the village life that is much different from before, and the tourists who enjoy our rural life. Since the beginning, each of my paintings has a story. I keep a notebook of all the subjects I want to draw, and it’s been filled with ideas — I only wish I had more time.” 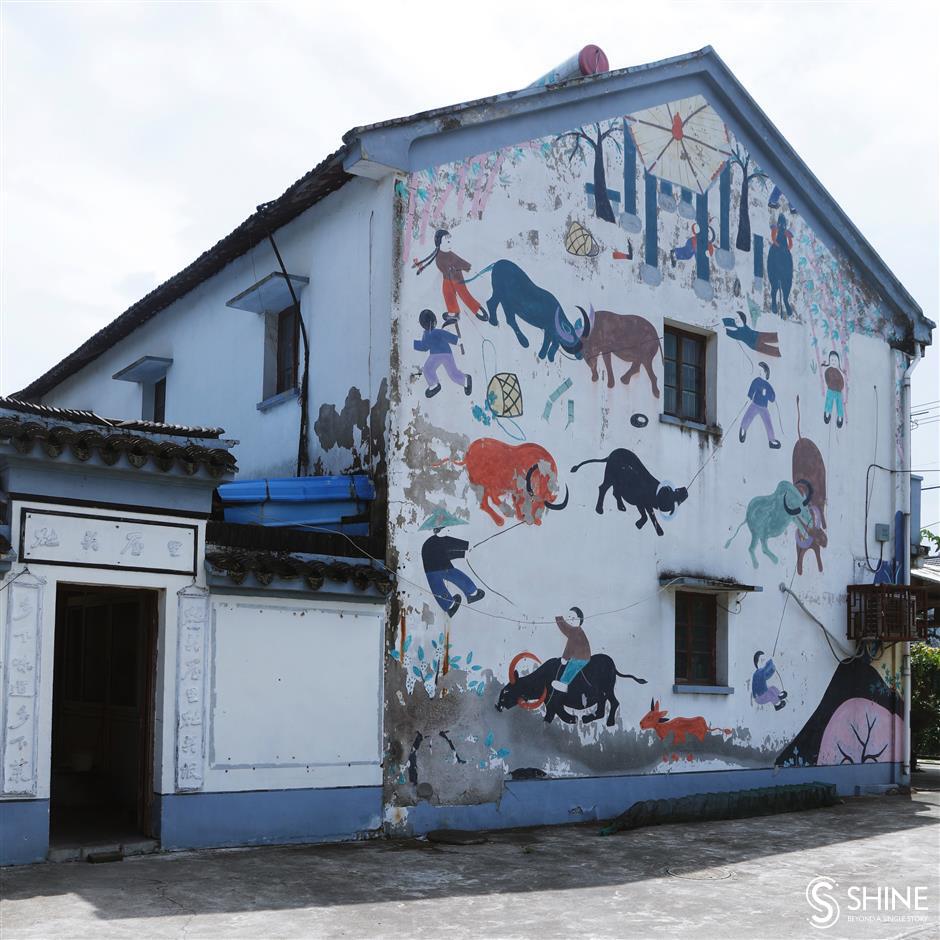 By the late 1980s, Cao was determined to make a living as a full-time painter, but it didn’t go as well as she had anticipated. As the country’s economy developed rapidly, many from the workshops left for more profitable work. At one time, Cao’s husband suggested they open a restaurant together — she wasn’t making much money from painting by the mid-1990s.

“We opened a restaurant for three months. It was more money, but I was very unhappy,” Cao said. “I think I’m not the kind of person who can do the same work every day. I like creating something new every day. If I only wanted to make money, I would have given up on painting long time ago.”

So she went back to painting even though she was selling small pieces for less than 50 yuan and making less than 20,000 for a year — little compared with many in other areas whose personal wealth rocketed during the 1990s.

Fortunately, the government built a scenic China Farmer Painting Village in 2005 and picked Cao’s hometown, where it had all begun. The park includes workshops for artists, both from the local village and from other parts of the country. Cao was among the first to apply, and she has since been painting in the workshop every day.

“Things got upward again after the government built this site. The price of my paintings is now 10 times what it used to be. I’m not making a huge amount of money, but I can make a living by doing something I love,” she said. “I can’t think of retirement now. I would probably get sick if I just stayed home and not paint.” 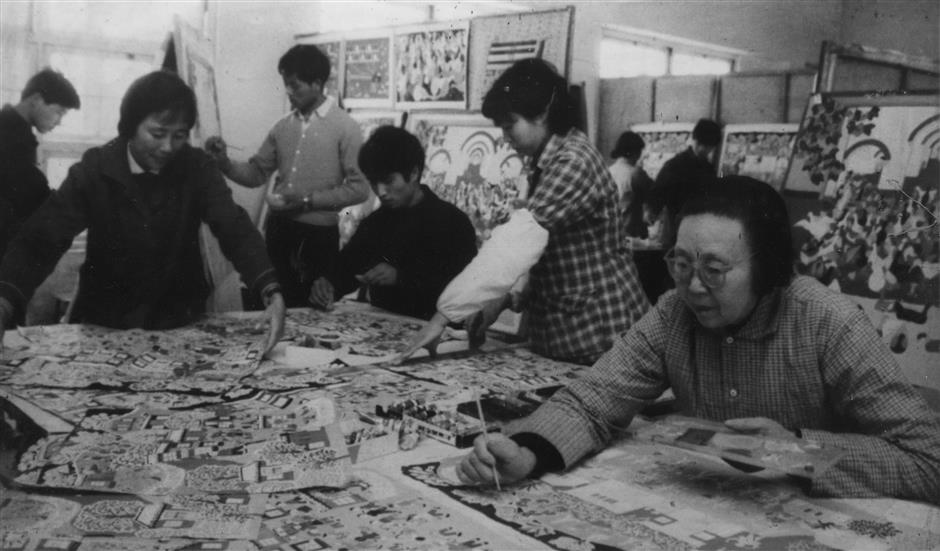 A farmer painting training session is held by Jinshan Culture Hall in this 1980s file photo. The artwork by farmers and workers was promoted as art for the masses.