When Betty Barr flew from Scotland to Shanghai to marry George Wang in 1984, the British teacher was not only undertaking the daring decision of a cross-cultural marriage, but she was also returning to her birthplace.

Born in the Shanghai in 1933, Barr’s Scottish missionary father and American mother met and married in the city, before the family was interned by the Japanese in 1943. In 1950, she left for the US to attend college, and in 1973, jumped at the first opportunity to return to Shanghai under a two-year teaching contract.

It was during that stay that she befriended Wang Jincai. The son of a poor blacksmith was born in 1927. His family struggled to make ends meet. Despite graduating top in his class in primary school, he had to forgo further education to get a job and help the family.

Self-taught in English and typing, he turned from a newspaper delivery boy to a typist at the English newspaper “The China Weekly Review.” Wang later became an English teacher.

The pair continued to correspond after Barr’s contract expired and she returned to the UK. Then, one day in 1984, Wang sent a letter proposing marriage. Barr replied with a telegram, all in capital letters: “YES LOVE BETTY.” 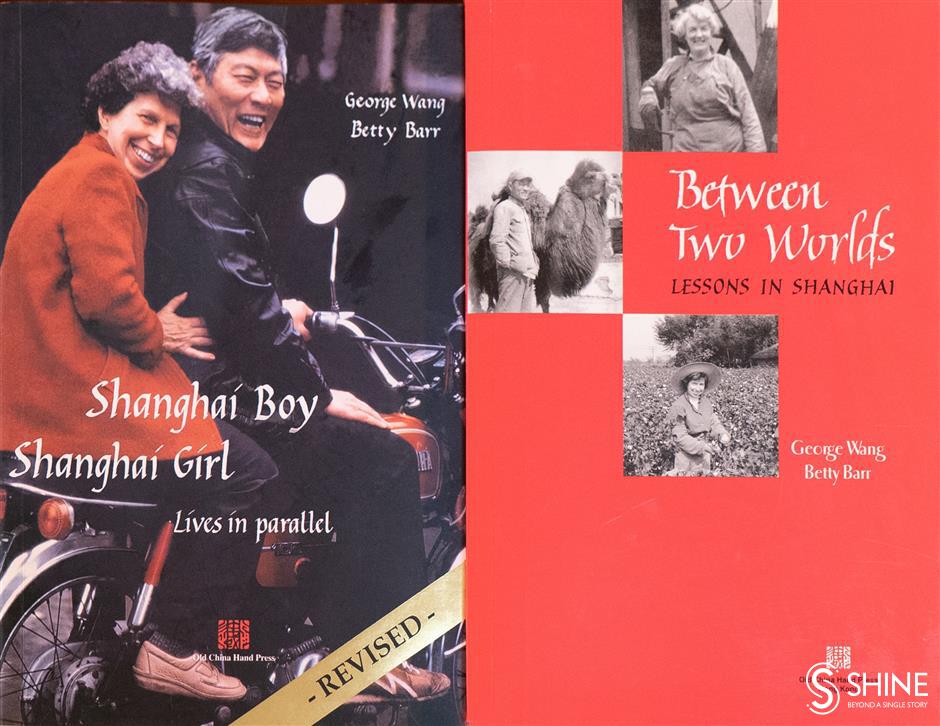 The front and back cover of the book written by George Wang and Betty Barr.

“And now it’s been 35 years,” said Barr, 86, as she flips through a photo album chronicling her years in China. “We have stayed in the same apartment, but the city has changed so much.”

She has witnessed that change from the bottom up.

“In 1984, in the courtyard of our block, lots of little boys were playing football,” she said. “Now, seven cars are parked there. The standard of living has risen. So many people can afford cars. And another thing. Our neighborhood used to be quite noisy, mainly because of car horns. Now the whole city is quieter because of the traffic campaign against horns.”

Foreign friends, most of them living in the former French Concession, used to complain that her residence in the Hongkou District was too far away.

“But now I’m only a 10-minute walk from the Metro, and it’s four strops to People’s Square,” Barr explained.

Locals nowadays rarely raise eyebrows at seeing expatriates taking the Metro or buses to get around the city. That wasn’t the case in the late 1980s and early 1990s, when foreigners using public transit stood out.

Wang, on the other hand, sees the city’s changes through a Chinese lens.

“I tell people I live in heaven now, and it’s not only me, but almost everyone in Shanghai,” he said. “You need only look at all the people singing and dancing every Saturday and Sunday in nearby Luxun park. My mother had no time for things like that. She had to get up at 2:30 every morning to go buy cheap wholesale food from very far away.”

He points at a photo in the album showing a handful of children playing in dirty water in front of decrepit housing in what was once a slum area on Zhaojiabang Road.

“This is where the poor of the poorest lived in old Shanghai,” he explained. “Whenever my mum saw a family that didn’t appear to worry about how to afford to food or clothes, she would call it ‘a good family.’ If you were to say that today, people would be shocked. I’m not saying there is nothing to complain about today. -- we still don’t have an elevator -- but many people just don’t know how bad it was and just keep complaining.”

Most people have seen the ‘bad old days” only through photos or movies. Wang has experienced it personally, survived and thrived.

“They used to say Shanghai is the Paris of the East,” he said. “They didn’t see my side of Shanghai in those times. But today, Shanghai is much better than Paris.” 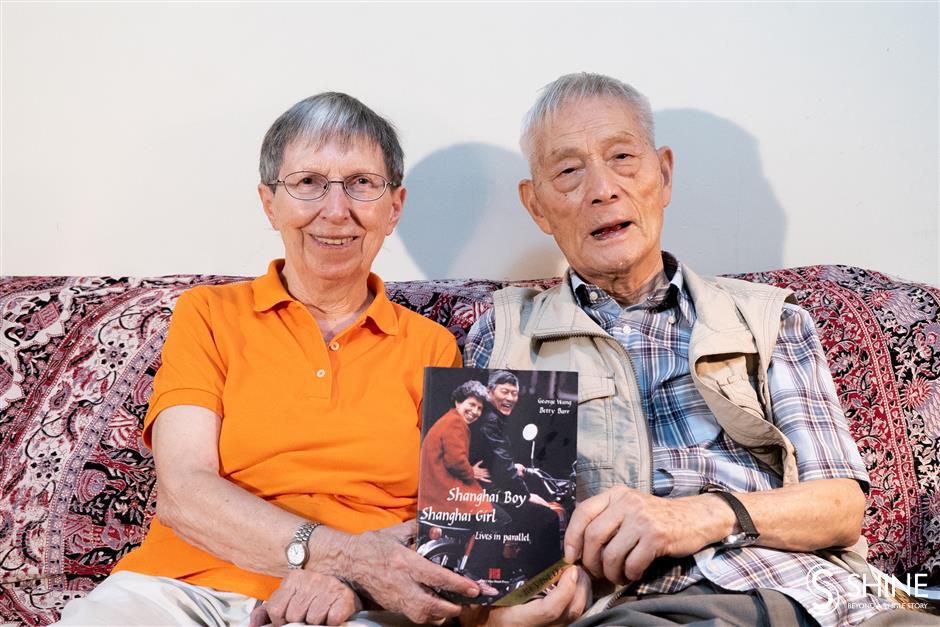 Betty Barr and George Wang hold the book they wrote together.

Every summer, the couple travels, either in China or abroad. Barr remembers the countless arguments Wang often has gotten into with foreign friends over the changes in China.

It often surprises her how little many foreigners know about the real China, possibly because of the way news is presented abroad. The couple said they have often been interviewed by foreign media and sometimes their positive comments about China are edited out.

They cite a recent news report out of the UK that stated Chinese rural life hasn’t changed at all over the decades.

“I just don’t understand how you can say that,” Wang complained. “We have visited a lot of rural areas. There are tremendous changes.”

Barr said an increasing number of friends have come to visit Shanghai and are surprised by what they see when they actually set foot in the city.

She has been a loyal reader of Shanghai Daily since the paper was founded in 1999.

“It gives me not only world news, but also Shanghai news,” Barr explained, adding that the weekend edition is her favorite because of the coverage about culture, books and films.