To Wang Songyin, a cemetery is like a huge library of autobiographies, and he is the man who edited the life stories of those in a condensed, artistic way.

A former sculptor from Harbin, northeast China’s Heilongjiang Province, Wang started his career as a tomb designer at Shanghai Fushouyuan Cemetery in Qingpu District at the late age of 64. Having constructed more than 100 tomb sculptures over the past two decades, the 87-year-old still works there as an art consultant.

Almost every day after breakfast, he patrols the serene ground for a couple hours, usually with his favorite dog, a brown chihuahua, following behind.

“First, I look at the newcomers — who are they?” said Wang. “Second, I see the tomb designs one by one, calmly and objectively, and think ‘what could I do to make them better?’”

In the 132-acre cemetery, there are more than 60,000 tombs. Wang has made only a small fraction of them but can tell stories about the deceased even after many years. 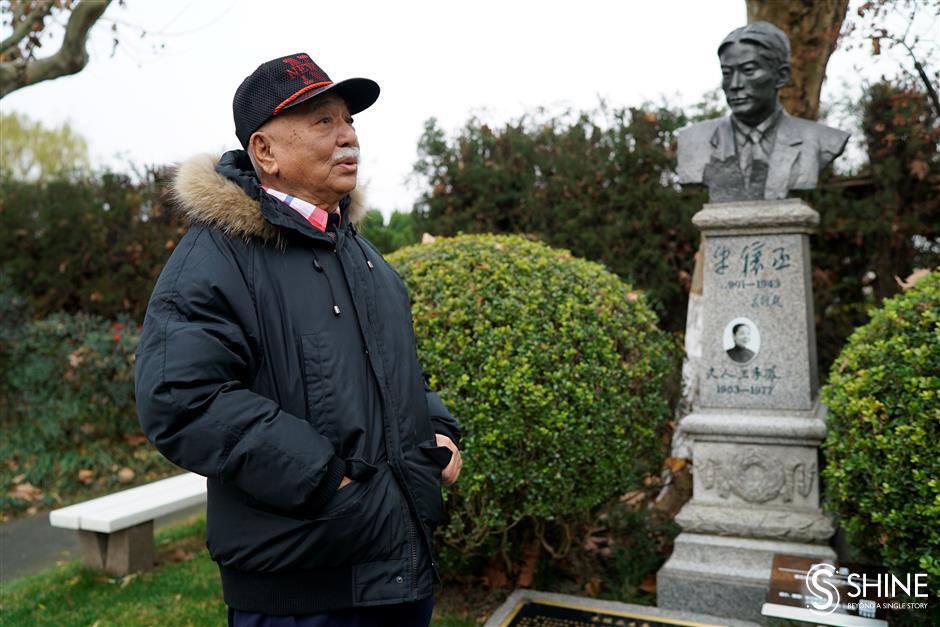 The first sculpture Wang designed is for Zhu Rangcheng.

The first sculpture he designed was for Zhu Rangcheng in 1997, the year he started working at Fushouyuan. Zhu was a famous stage actor in the early 1930s. One of the left-wing writers, he was arrested at a train station for engaging in revolutionary activities and later died in a Siberian labor camp in 1943.

“When he was arrested, he must have been worried about his future,” Wang said. “So I moulded him a melancholy expression. Zhu had acted as females in some stage plays, so I added some feminine qualities, such as more arched eyebrows and a slimmer jawline. When he died he left behind an unfinished memoir, which is why I made him an incomplete statue base.”

It took him more than one month to finish Zhu’s sculpture.

Wang was one of the first batch of 20 professional artists in the People’s Republic after its founding in 1949. He graduated from Lu Xun Academy of Fine Arts in 1956 and became a professional sculptor the next year in a sculpture workshop affiliated with the local cultural bureau.

Next to his workplace, there was a cemetery where Jews and Russians were buried. Hanging around the park was a way for Wang to spend his leisure time. Sometimes he would join in and watch the funerals, which gave him some contemplation of life after death.

In 1996, he saw a piece of news in the local newspaper — Shanghai Fushouyuan was planning to rebuild a monument to pay tribute to Ruan Lingyu, the most celebrated actress of Chinese cinema in the 1930s. Sculpture design ideas were solicited from the public.

Wang submitted four designs for the monument. Although he didn’t win, the project provided a chance to explore the profession more deeply.

He was eventually hired by Fushouyuan Cemetery as a sculptor in 1997.

“It was easy to make such a big decision to leave Harbin and settle in Shanghai, because our only son died when he was 17,” he said. “After I retired, I needed to find a new source of motivation.” 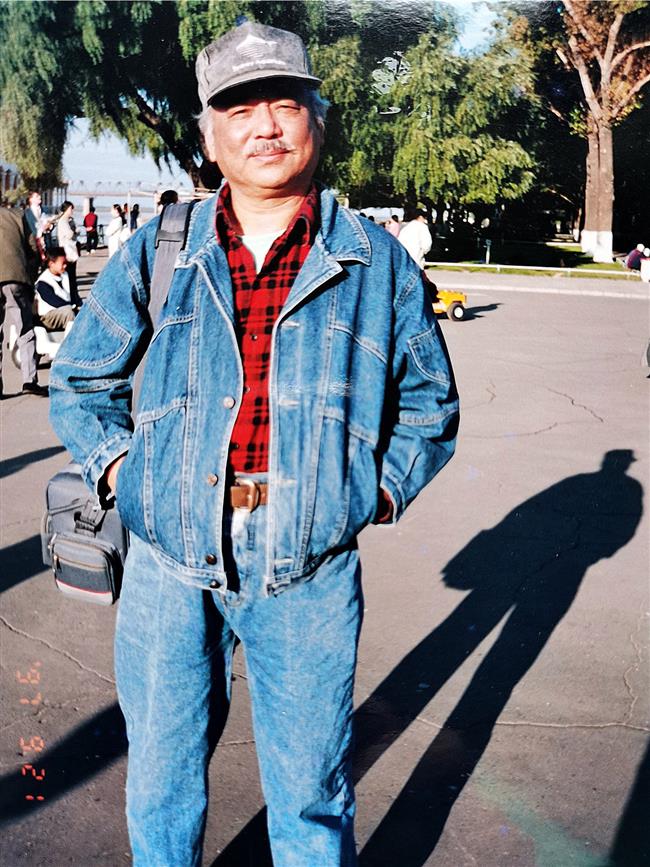 At the beginning of a project, Wang would research the person about to be buried, chatting with the deceased’s relatives to learn more about his or her personality, habits and unique qualities he could incorporate into the sculpture to make it visually appealing.

“We just have one chance to make it right, because the dead will not die again to give us a second chance,” Wang said. “Only diligence and hard work can make it beautiful; otherwise, it’s a waste of resources.”

For the sculpture of Sun Dayu, Wang used a large stone as part of the tomb. Sun was a prominent translator known for his translation of William Shakespeare’s works into Chinese.

“His family told me he had a fiery temper,” he said. “So I used the big stone to showcase the heaviness of his contribution to the public, as well as the negative influence of his anger on his near and dear.”

For the sculpture of Liu Xiao, Wang weaved traditional embroidered portrait skills into tombstone carving. Liu, a former ambassador and deputy minister of foreign affairs, lived and worked in Shanghai for many years. He loved the city and made considerable contributions to its liberation and construction. 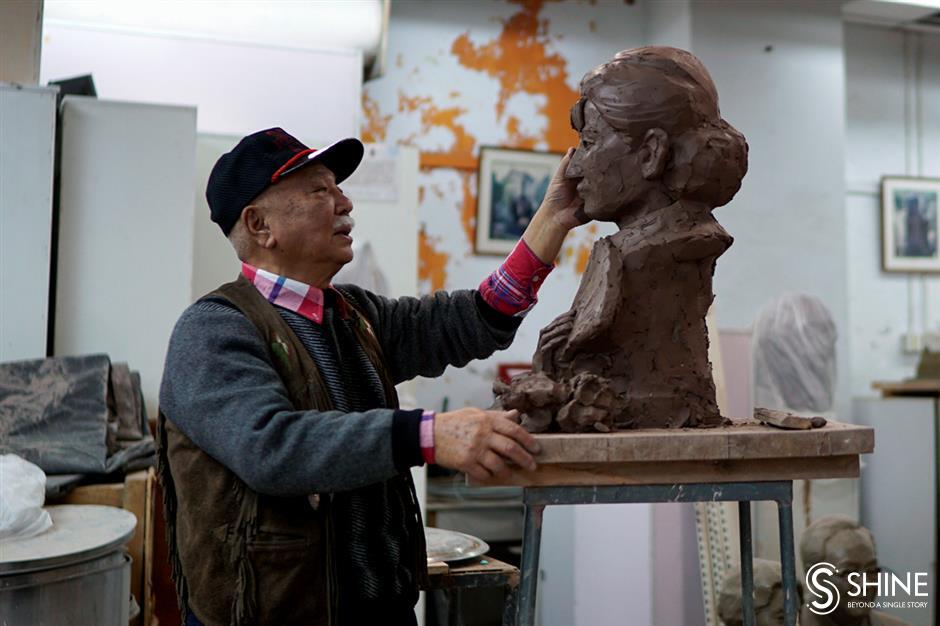 Wang Songyin smooths the surface of a sculpture at the workshop.

Usually, relatives of the deceased examine the sculpture when it’s almost completed. Some customers think the sculptures are “not quite alike” and require many revisions. Once, a man came to watch Wang mould his father’s sculpture for an entire day.

“At first, I thought I was the professional, and those who were highly demanding didn’t understand sculpture art,” Wang said.

But gradually he realized he should sculpt with the deceased’s loved ones in mind, not the image he had in his mind.

“If you put your feet in others’ shoes, you can do the job well with due respect,” Wang always told his successors.

Sometimes people approached Wang to request a sculpture before they died, like Shanghai-born novelist Zhou Li.

Zhou came several times to check on her sculpture at the workshop.

“The last time she came, she requested I add a necklace to her statue,” said Wang. “I only feel fulfilled if my customers are satisfied.”

Reliable and trustworthy, Wang made many commissioned sculptures in the cemetery.

The sculpture of Chen Duxiu, a leading figure in the anti-feudal May 4th Movement (1917-23), features a tattered long gown from that period, reflective of Chen’s strong opposition to old culture and ethics. 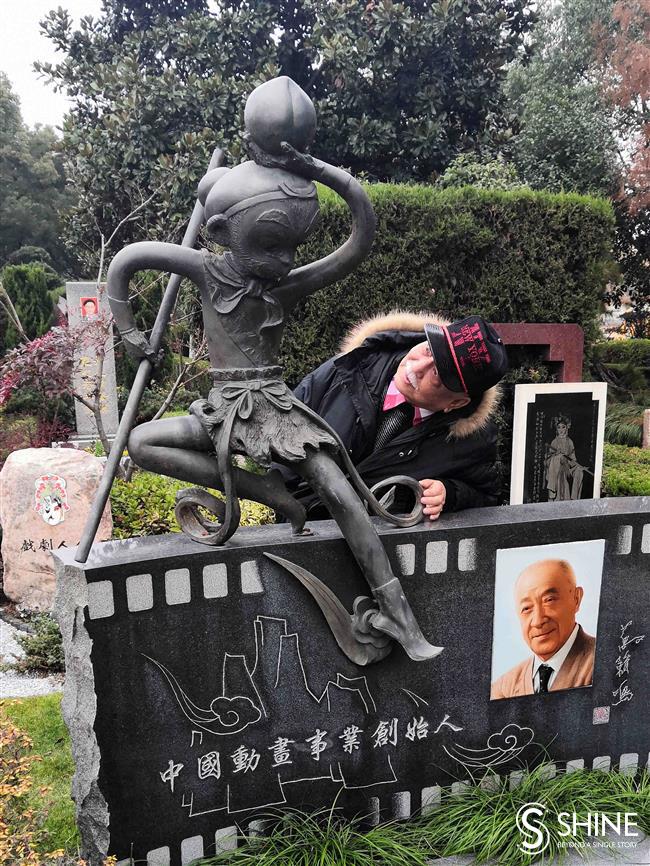 Wang looks at the copper-made monkey king on the tomb of Wan Laiming.

A vivid, copper-made monkey king sits on the tomb of Wan Laiming. Wan, known as China’s first animator, created “The Monkey King” — a classic Chinese animated film from the 1960s.

The statue of Qiao Guanhua sits casually on a cane chair. A cheerful smile on his face represents the confidence of China’s first generation of diplomats who helped launch a new era in Sino-American relations in the 1970s.

Although Wang seldom accepts projects anymore, he stays active in the profession by giving advice to young cemetery sculptors.

He knows the profession will eventually move online, along with the funeral and death-care industry.

“I’m pretty happy about what I do today,” he said. “I will do what I can to give the dead a long-lasting place to rest. Nothing else.”

Q: You've been working in the cemetery for 23 years. Can you share the biggest change before and after?

A: At first, I was very vain. I wanted to be a famous master sculptor, publishing albums of my work. Now, I feel that former aspiration is nonsense. Once I received an offer from Beijing to publish an album of my works and I refused. I feel satisfied if my customers are satisfied with my tailor-made sculptures.

A: Actually, I do not want to think about a future plan at my age. I just do what I can and think less about the future. What I’m doing now is to leave something for my company and the funeral industry.

As such, I give myself an assignment every day, finishing tomb design plans and thinking about questions like how to transform a headstone into a novel shape and how to break through the bottleneck of our current productions. I’m also doing some theoretical research on eco-friendly tomb materials.

I don’t think headstones should appear dark and gloomy all the time, so I think about how to make them interesting and colorful.

Q: What’s the most important thing in your life?

A: I think everyone should use their lives doing useful things. Nobody knows how long his or her life span will be. Your wisdom, skills and achievements are not inherent, and you cannot take them to your afterlife. Life only gives you a limited amount of time. How should you use it? Just use it well.

Q: Are you happy now?

A: Of course I’m happy. For example, when I walk around the cemetery, I see many who passed away at an age younger than mine. I’m 87 and I’m still here and I’m still useful to society, which makes me feel satisfied and happy.

If you are in a cemetery, you can feel how fragile, short and precious life is.