Check out Yuyuan Garden delights on a budget

Yuyuan Garden is holding a special summer bazaar with lots of new summer options such as fermented glutinous rice balls with shaved ice and the newest White Rabbit ice cream. Fiona and Shirlene have a mission: to enjoy the most Yuyuan Garden has to offer, including tasty treats and fun events, on a budget of just 100 yuan (US$14.12).

Lu Bo Lang was originally a teahouse that opened in 1924. It was only in the 1970s that the space was transformed into a restaurant, which grew in fame after hosting several important state guests, including King Norodom Sihanouk of Cambodia in 1973, the UK’s Queen Elizabeth II in 1986 and former US president Bill Clinton in 1998.

As a restaurant in the Michelin Guide, a meal usually costs more than 200 yuan per person.

If you don’t have an adequate budget or enough time, the take-out counter is a better choice. It provides all kinds of the signature dim sum, such as xiehuangsu, shaomai, peanut pastry and walnut pastry (referring to both the shape and filling).

On a budget, the best choice will be xiehuangsu (30 yuan for three), also known as xiekehuang. It literally means crab shell, referring to the shape of the flaky pastry, which is usually filled with crab meat.

It’s best tried when still hot and the filling of crab roe and spring onion, with a flaky pastry crust, provides a flavorful taste. 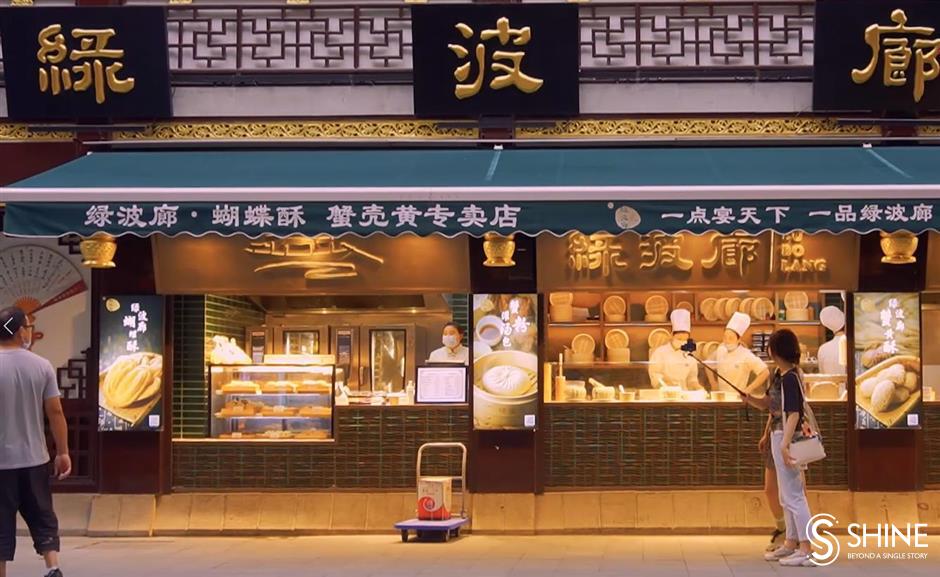 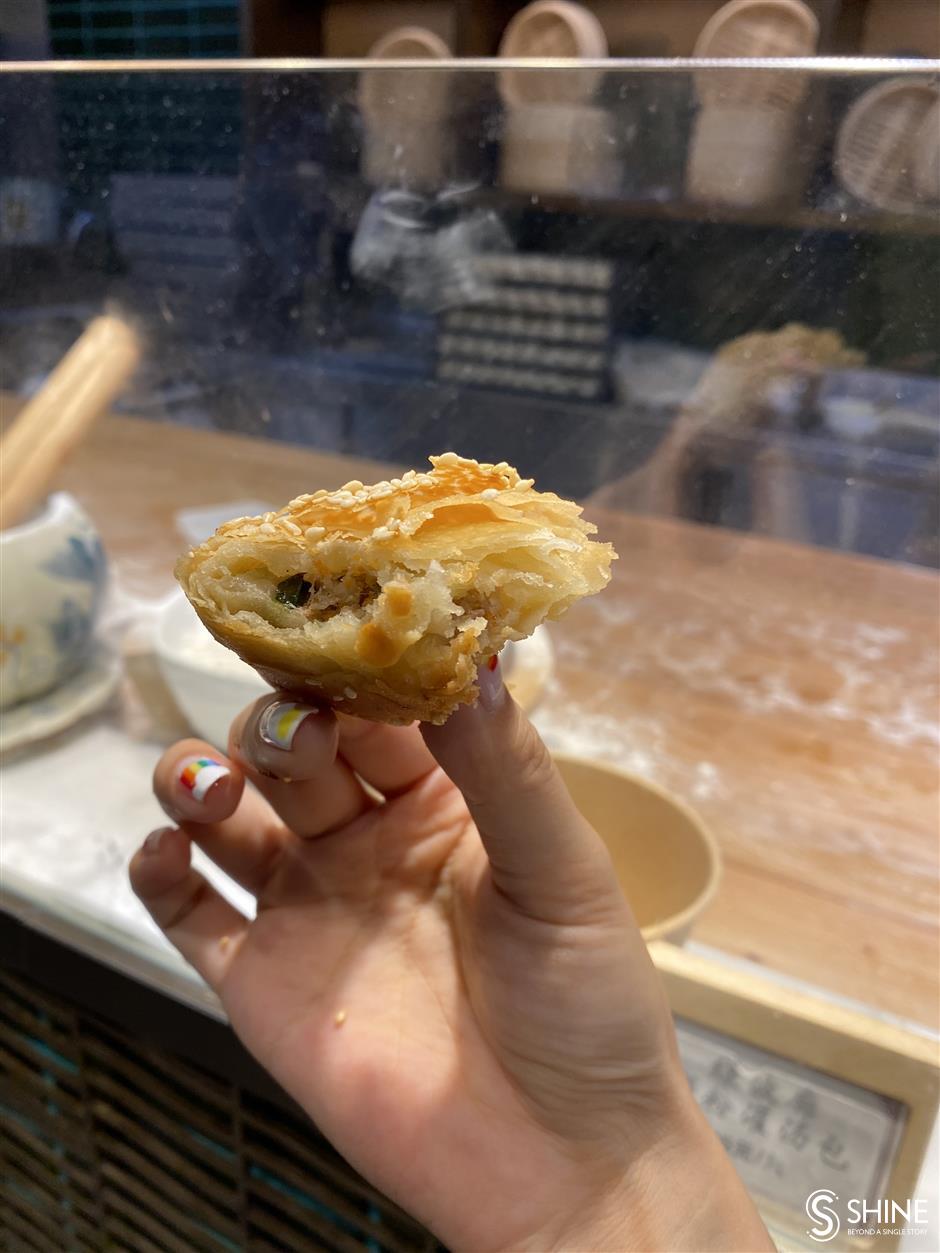 On our budget, we tried fermented glutinous rice balls with shaved ice and goji berries.

Compared to the original sweet dumplings, it is a better choice for summer and really worth a try. 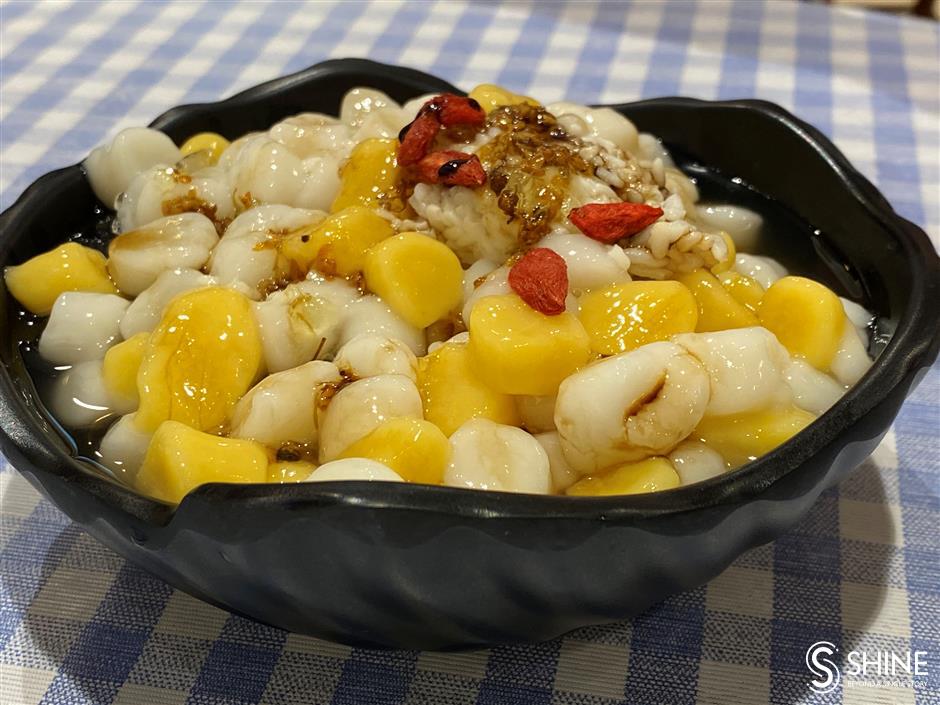 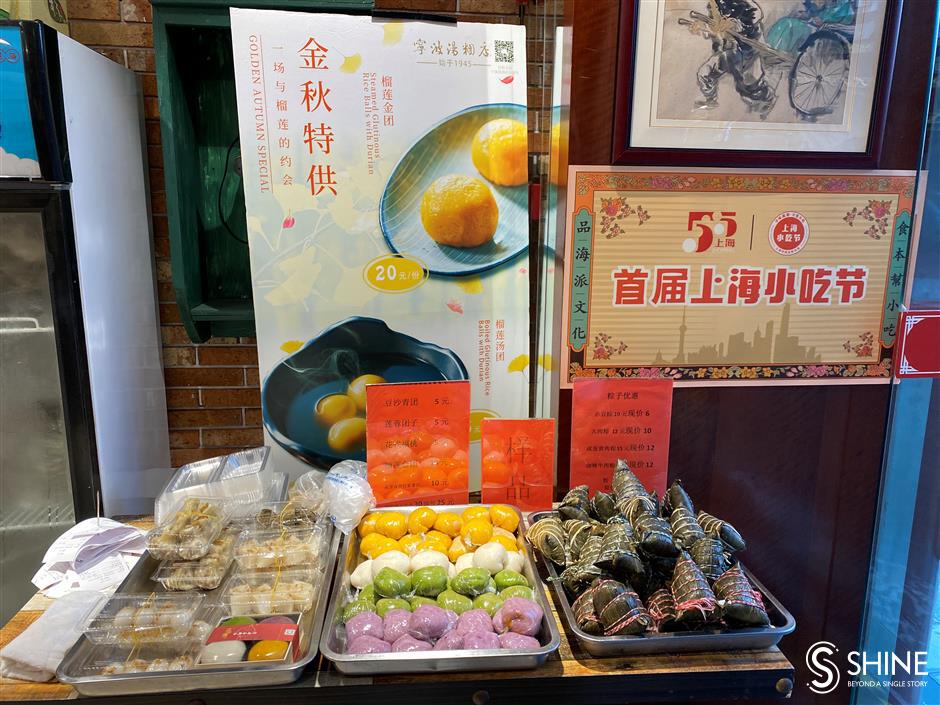 The Nanxiang Steamed Bun Restaurant has over a century of history and tourists and locals alike flock here to sample the traditional Shanghai staple food of xiaolongbao.

Before 2018, the take-out shop was on the first floor of the restaurant, right beside the Zigzag Bridge, where the queue used to stretch to.

After a six-month renovation in 2018, the downstairs shop changed into a new waiting area, and the take-out counter moved to the Gold Square, about 50 meters away, near Laomiao Gold shop.

Something traditional and special on your budget? The guantangbao (super steamed bun with crab and pork) is a better choice than the famous xiaolongbao (pork steamed bun).

At the take-away shop, guantangbao is served in a plastic plate with a drinking straw. The price is 30 yuan each for take-away and 42 yuan for dining in the restaurant.

Get some Zhenjiang rice vinegar from the large bottle in the shop, put the straw in the hot bun, drink the broth first (really hot), then enjoy the whole bun.

The filling is pure Nanxiang-style, which means minimally seasoned (no ginger or spring onion here) and the broth is pure and almost clear. 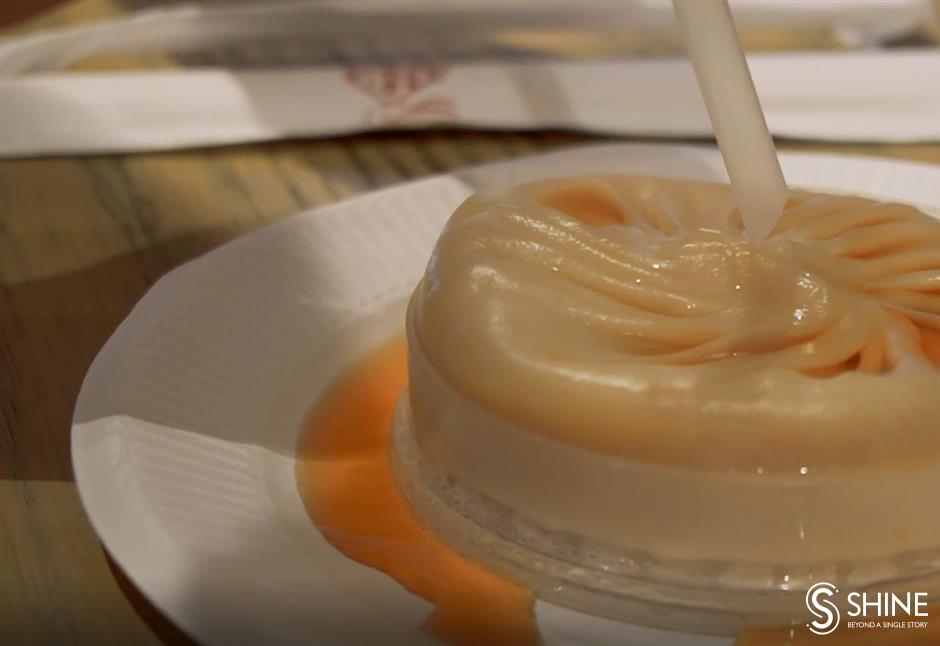 Put a straw in the hot bun 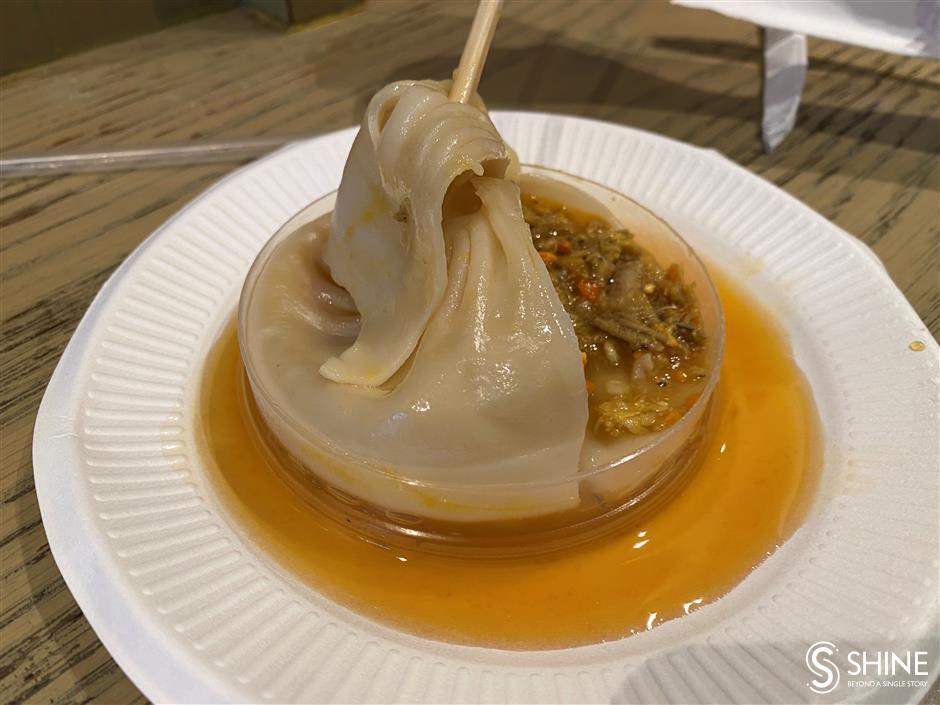 Use a chopstick to poke the bun 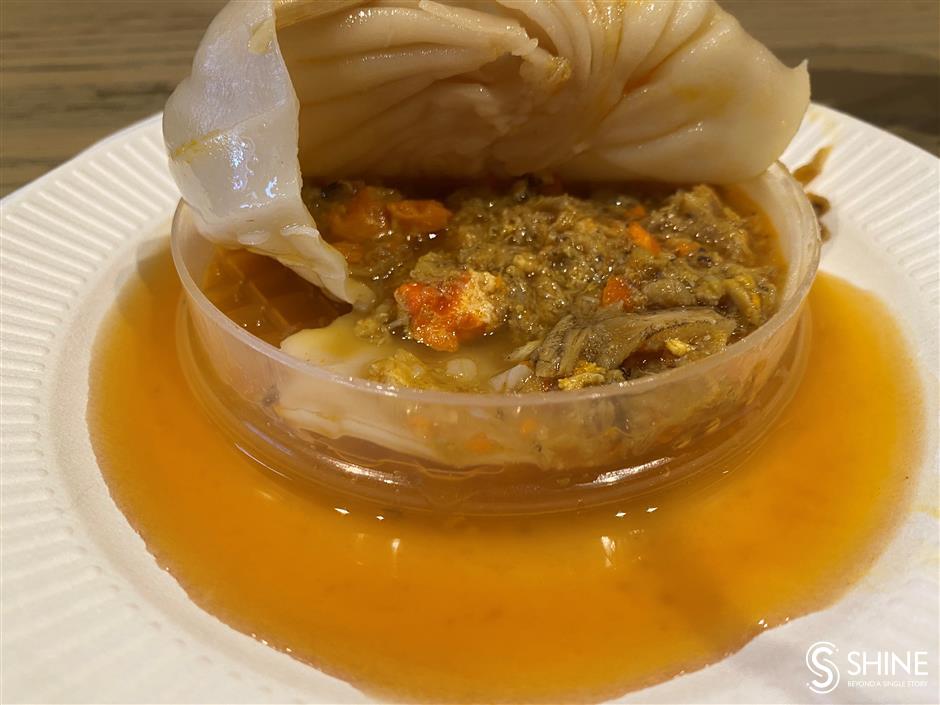 Filling with crab and pork is revealed.

Xiyangjing, the Chinese thaumatrope, has a history of more than 1,300 years, and is an intangible cultural heritage.

The booth at Yuyuan Garden has operated for decades, still in the traditional way. There are six small windows on a wooden cabinet, through which audiences can see the three-minute show for 10 yuan per person.

The show inside the wooden cabinet is actually a lantern slide show, the highlight is the live pingshu (a Quyi art form of oral storytelling) by the performer, from ancient Chinese legend to the Shanghai Expo, each picture tells a wonderful story.

The pingshu performance is in a northern dialect of Chinese. During the storytelling, the performer may imitate people or birds or wild animals. Although there is no English service, it’s worth seeing. 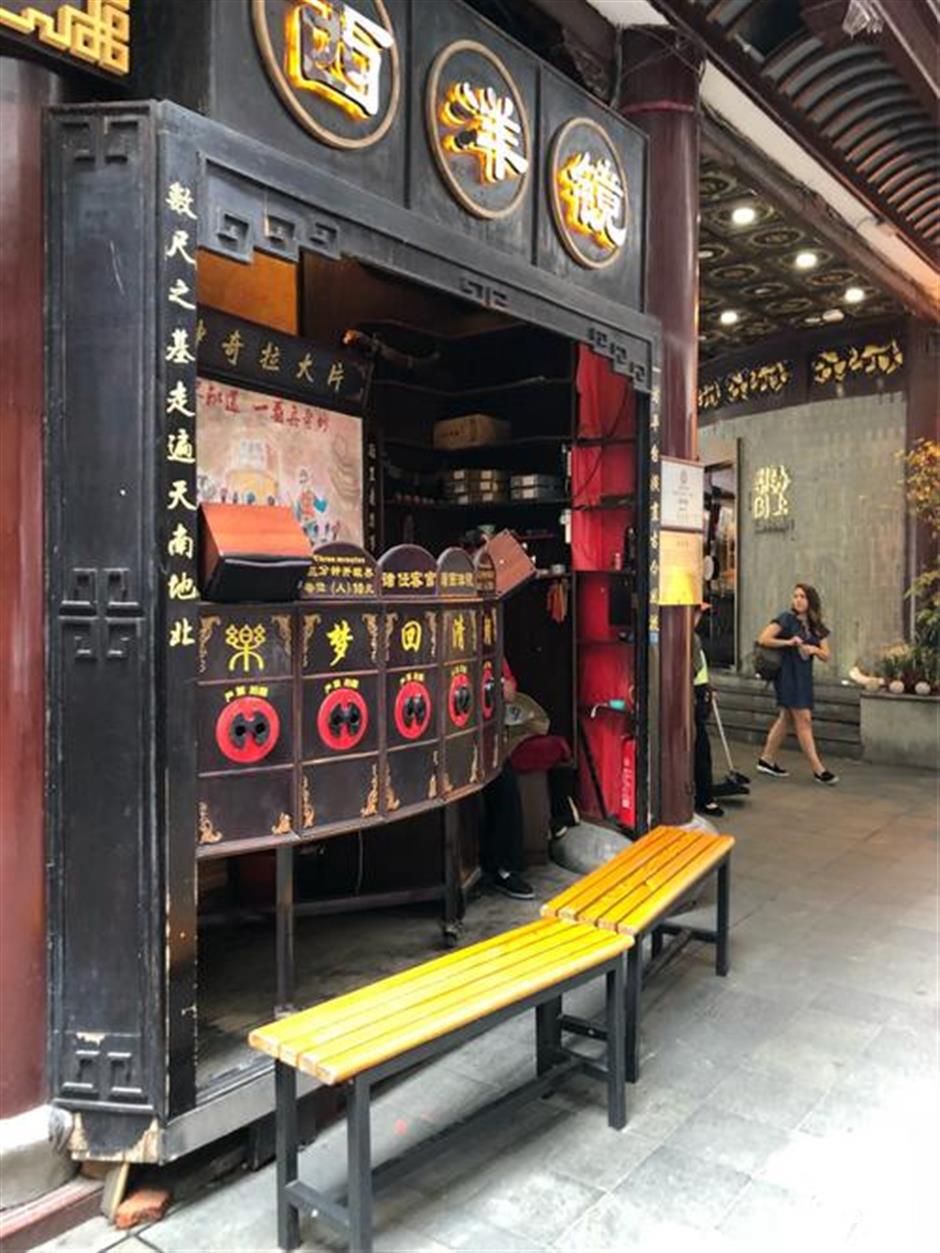 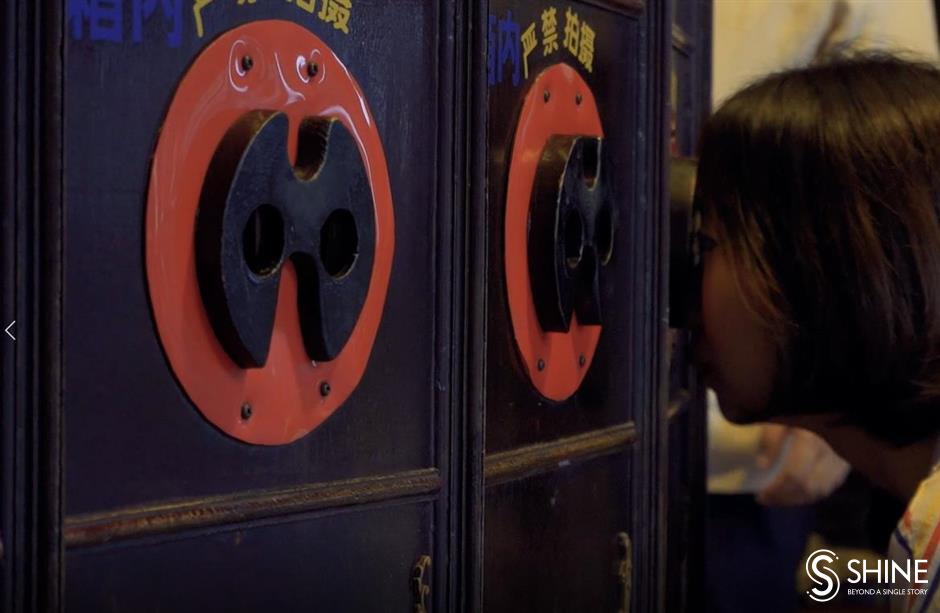 Fiona Li peeks into a xiyangjing, the Chinese thaumatrope.