Museums, fascinating as they may be, can be mentally and physically exhausting. The queuing up to pass security checks. The trying to make sense of brochures that tell you what's on display where. The overload of information as you pass from exhibit to exhibit. And walking, walking, walking.

If you would like a museum experience that's more intimate and grassroots-focused, plan a visit to Shanghai's first community museum. Located in the Hongqiao Airport New Village in Changning District, the venue officially opened on June 29 to mark the 100th anniversary of the airport. 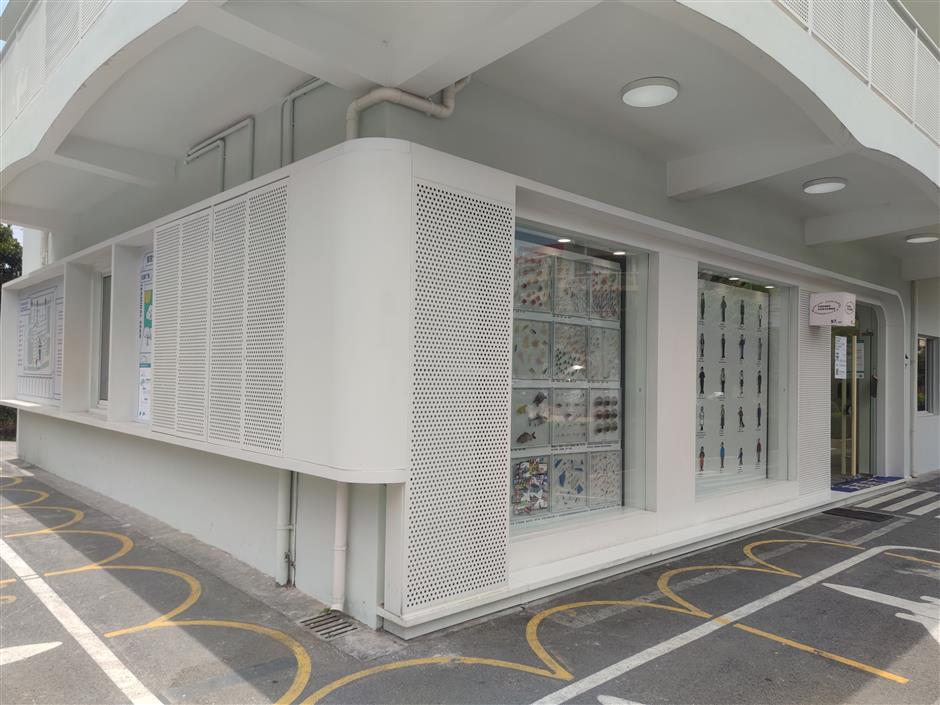 I'm here to have a look.

Hongqiao Airport was just a small facility with a dirt runway when it opened in 1921. During China's reform and opening-up period in the late 1970s, the airport's management switched from the military to a civilian business.

The village was initially built in 1978 as a residential area for aviation workers and support services.

The two-story museum, once a hostel, is designed to look like a terminal. Two glass windows on the wall beside the entrance display 25 cartoon figures representing the people who have lived and worked here – pilots, flight attendants, aircraft maintenance crews, along with local service providers like barbers and shop assistants. 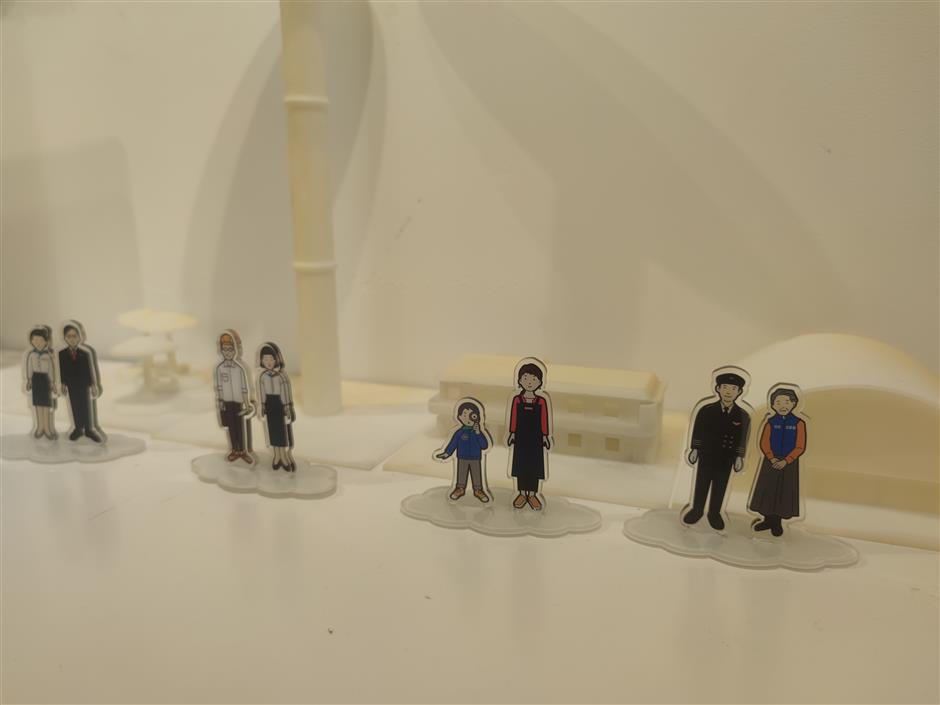 Cartoon figures represent the people living and working in the community, ranging from pilots to local service providers.

Community museums focusing on a specific locale are created for and by area residents.

"The people around us include not only neighbors but also those working in the area," says Zhu Dan, director of the project and a member of Big Fish Community Design Center. "They are all the witnesses to the development of the neighborhood. Community museums record the stories of ordinary people."

Indeed, the first thing that I see upon entering the museum are dozens of family photos under the theme "We Are All Airport People."

The photos feature the people living and working in the community. One, for example, shows Chen Yongping, who owns a local real estate agency. Because they trust Chen, many older residents leave their spare keys with him – sometimes for years on end ­– in case they lose theirs. 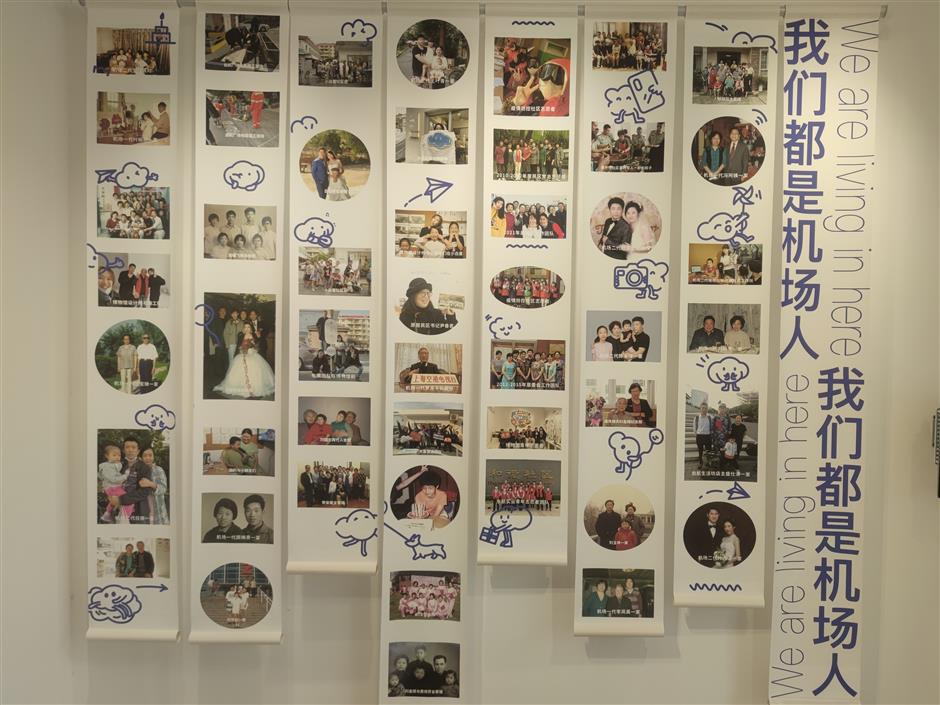 Family photos under the theme "We Are All Airport People" are displayed in a museum dedicated to a community initially built for aviation workers.

It is a Thursday afternoon during summer school holidays. Several boys are playing or reading books in the museum. It's a local gathering place.

One little boy has his nose in a children's book about different types of aircraft. All the books available for visitors deal with some aspect of aviation.

"This is my favorite book," says the 5-year-old boy surnamed Wang. "My grandmother goes to the wet market to buy food for dinner and leaves me alone here. I come here every day because there are so many books that I like."

Another boy is playing with a model airplane, which was donated by residents, along with other exhibits like old photos, employee ID cards, magazines and workbooks.

Ye Baigen, 61, is one of those donors. He hails from Shaoxing in Zhejiang Province but came to Shanghai 42 years ago as a soldier. He worked in mechanical maintenance on the airport runways and later became the Party secretary of the lighting division at Hongqiao Airport.

When he heard that a museum would be established, he dug through piles of memorabilia and found old tools, now rusted, that he once used in his work. He donated them to the museum, though they aren't on display yet. An old photo he had of the village now hangs on the wall of the museum.

It shows that the square next to the community museum was once a local wet market. There was also a water tower near the museum and even restaurants, shops, a kindergarten and a primary school.

"The old residents were either colleagues or comrades-in-arms, so we had close neighborhood relationships," says Ye, "Almost every resident has his own story related to aviation, and these stories comprise part of the history of civil aviation. I think the museum is probably too small to hold all the memorabilia."

Ye tells me that an aircraft dispatch assistant who was in charge of the emergency landing of China Eastern Airline flight 586 in 1998 still lives in the community. She was on duty when the flight crew of an MD-11 aircraft reported that the nose landing gear wasn't operating property. The aircraft safely landed after a nerve-wracking 3-and-a-half hours. The plane suffered significant damage, but only nine of the 138 people on board suffered minor injuries.

A movie entitled "Emergency Forced Landing," based about the heroic incident, was made in 1999 and dedicated to the 50th anniversary of the People's Republic of China.

The assistant aircraft dispatcher, according to Ye, was also the matchmaker who introduced him to his wife.

"Upon getting married, our company would allocate houses to us," says Ye. "Many people might complain about the roar of airplanes taking off and landing, but I always think it sounds wonderful. I can't fall asleep without it." 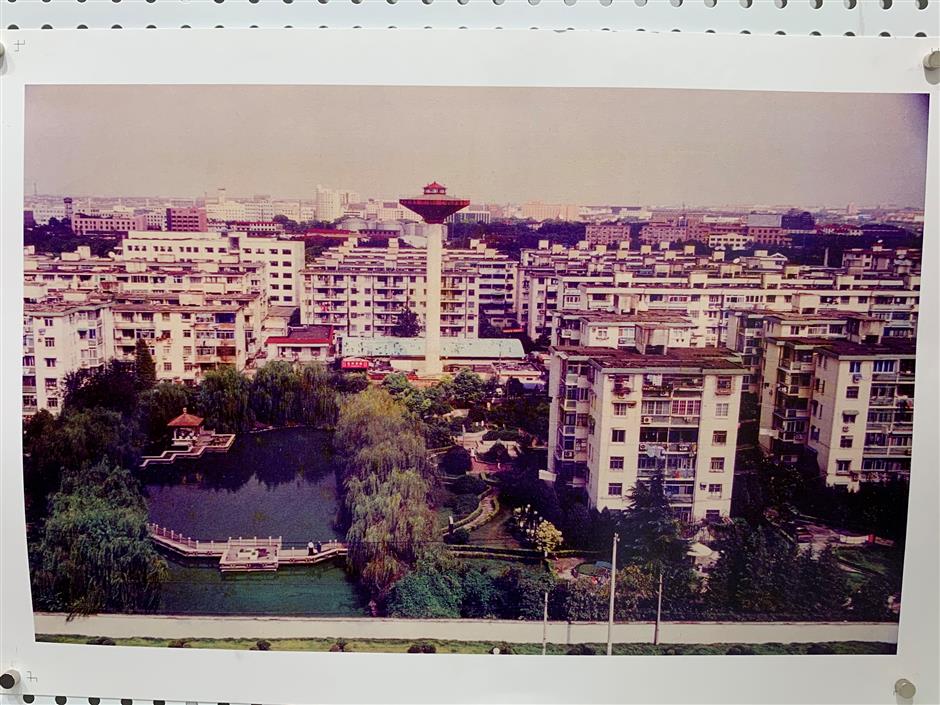 According to Cao Xinli, Party secretary of the neighborhood committee, there are 6,780 residents in the new village. Most have some connection with the aviation industry.

"From the beginning, the community has been inclusive," says Cao, who was born in 1985. "The people living here come from all corners of the country."

Participation is the fundamental concept of the community museum. Apart from donating exhibits, people of the community also took a role in creating the interior décor. There's a colorful carpet made by local children that features the abstract, imaginative map of the community.

"In the eyes of the children, the area of their school is the largest," says director Zhu.

The little artists are so proud of their work that they bring friends and family to see it. 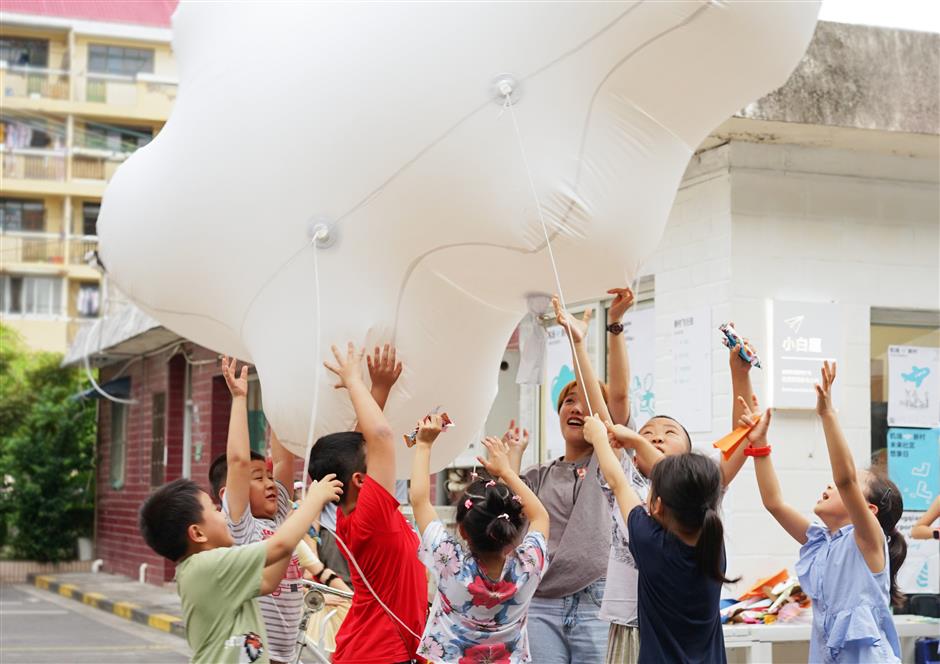 For children, the community museum is a popular gathering place.

"Children really like the place," says Ma Qingyun, 21, a volunteer of the museum. "Many people visit here while walking their dogs. One of my jobs is to look after their pets while they are inside."

Ma was born and raised in the neighborhood. Her father is a customs inspection officer. The family donated a Shanghai Airlines airplane model to the museum.

"Visiting a traditional museum is a one-off experience, while a community museum encourages people to visit frequently," says Zhu. "It is important to create a comfortable atmosphere here."

The project to create the community museum started a year ago. The neighborhood committee invited Big Fish Community Design Center to help with the work.

"If you think of the museum as a show, then the neighborhood committee is like the theater venue, Big Fish is the artistic director and our residents are leading actors," says Cao.

Aside from providing exhibits, the "actors" share their stories on the museum walls, where visitors can leave notes. One of them is signed "wife of Chai Hongliang," a retired military pilot.

"The happiest things in life were his safe returns home and growing old together," her note reads. 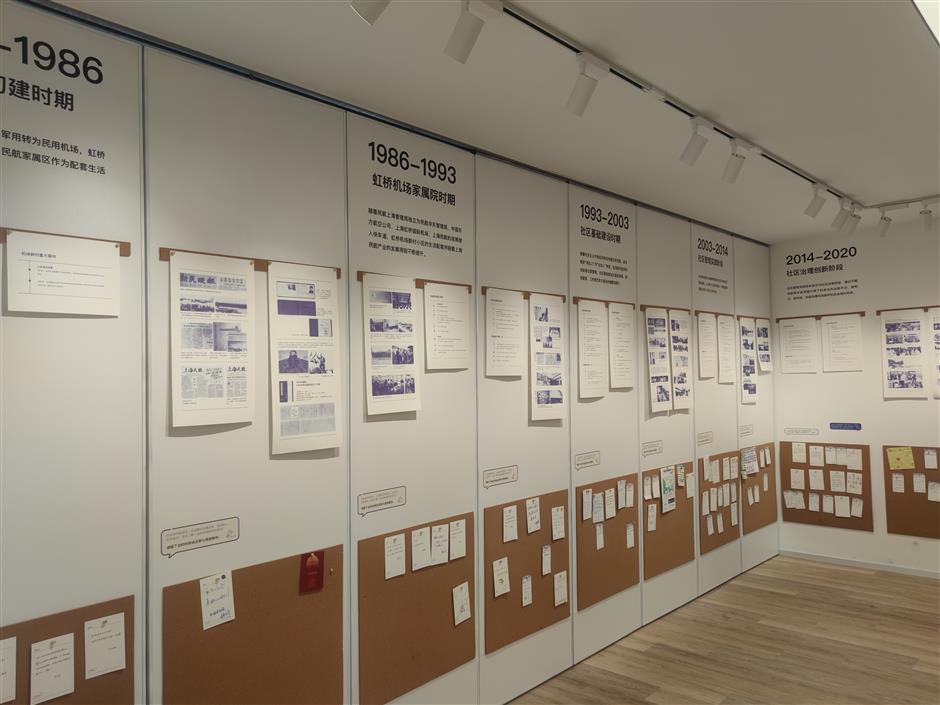 Exhibitions not only feature the history of the community but also encourage people to share stories on the walls.

Zhu said local residents were canvassed for their opinions as part of research a year ago on founding the museum.

"During the period, we found that residents wanted to be heard," she says. "The museum offers them a platform to express themselves and foster connections with others."

According to Zhu, team members who brought the museum to fruition were mainly born after 1990. Some of them had resigned from architectural firms to work for lower salaries at the community design center.

"They were used to large, commercial projects that didn't take into consideration user feedback," says Zhu. "The community projects are warm and create direct contact between designers and users."

Zhu and her colleagues are making preparation for an upcoming exhibition, probably about square dancing in the community. They are also planning a café in a small space near the museum, which they think will attract more young people to get involved in the community.

"Our ultimate goal is to have the residents take over this project," says Zhu.