It takes seconds to abandon animals but often years to rescue and nourish them back to health.

At a shelter in Jiading District, 12 puppies were frolicking and playing happily. They had been vaccinated and ready for adoption. But last month, on a rainy night the puppies were abandoned on the street. Originally they had been destined for a role in an online sales gimmick called Random Pet Box, or "pet blind box," for which customers pay a fee and receive in the mail a box containing a random animal – a puppy, kitten, hamster or rabbit.

If it hadn't been for Katherine Zhou, who rushed to the scene, they would have died.

"It was the night before the Mid-Autumn Festival, and a heavy rain hit the city," Zhou said. "I learned the puppies had been abandoned online, so I rushed there from home. I hesitated because I already had hundreds of dogs to care for at the shelter. But I couldn't bear to let them die." 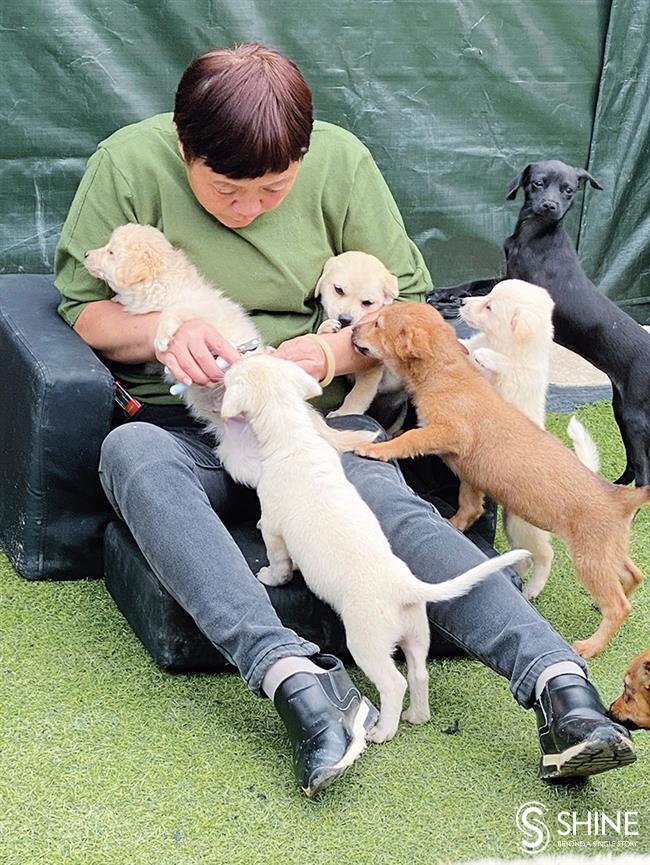 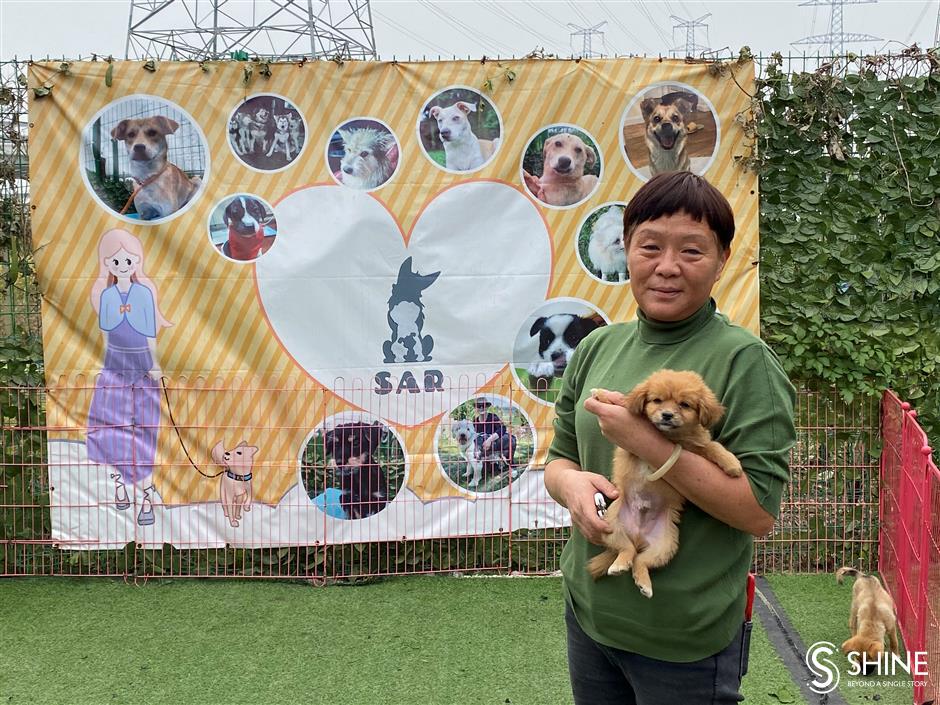 Zhou is the founder of Shanghai Animal Rescue.

Zhou is the founder of Shanghai Animal Rescue (SAR), a non-profit organization founded in 2015, which now cares for around 500 dogs rescued from various parts of the city.

When Zhou reached the scene, she found that there had been other volunteers helping the animals. She eventually took in 36 puppies, and others rescued the kittens.

But taking in the animals was just the first step. Some of the puppies were newly born and in bad condition. A vet who had been working with SAR was called on the day and worked overnight, doing his utmost to save them. Sadly, most of the puppies suffered from pneumonia and died, but the vet managed to revive 12.

"There is a story behind every dog living here, a very heartbreaking story," Zhou said.

Consider the example of Lala, a 1-year-old who has been living in the shelter since she was rescued as a pup.

"Lala suffers from a nervous disorder and was about to be adopted by a Canadian," Zhou said. "But the night before being adopted, she had four seizures, and we doubted if she could survive such a long flight. We explained her condition to the well-intentioned Canadian who had been looking forward to caring for her. We decided to keep her here in Shanghai."

Another dog living with the new puppies is one with nerve problems. He could hardly stand, not to mention walking on his own. Zhou saved him from a neighborhood complex, where he would have been killed as the residents felt threatened by him. 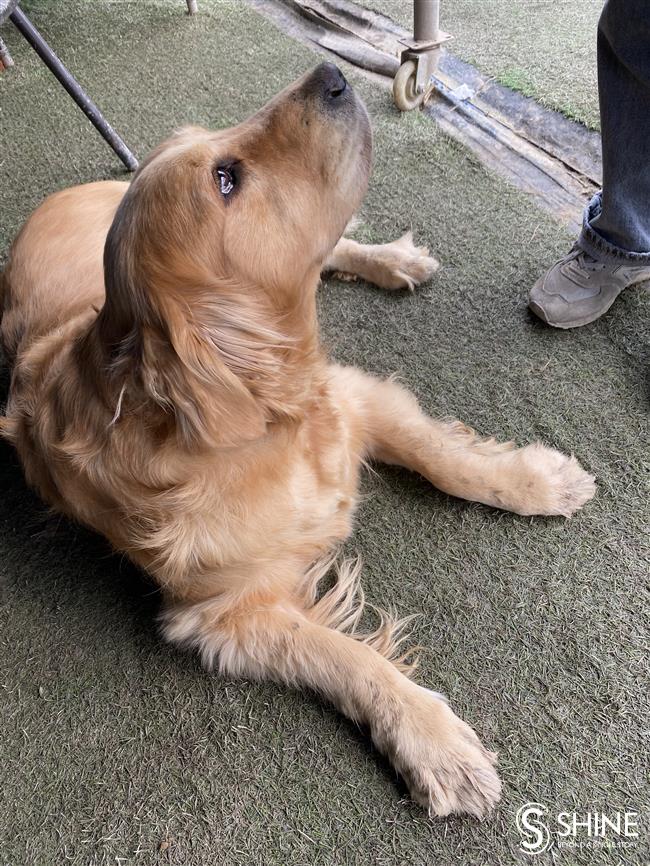 Every dog living in Shanghai Animal Rescue has a story.

Before founding Shanghai Animal Rescue in 2015, Zhou had been a volunteer at another animal rescue organization. She owned a business in the Pudong New Area, managing a company with 40 employees. The animal rescue facility, however, had to be closed for various reasons, and about 30 dogs were about to lose their home. Zhou couldn't bear abandoning the dogs, so she started her own rescue center in Jiading.

Some of Zhou's friends point out that they rarely see abandoned animals on the street. Zhou said she pays close attention to her surroundings. Sometimes animals are left in boxes on the curb. She goes out of her way to check them, and is always on the lookout. She said that abandoned animals remain a big problem. 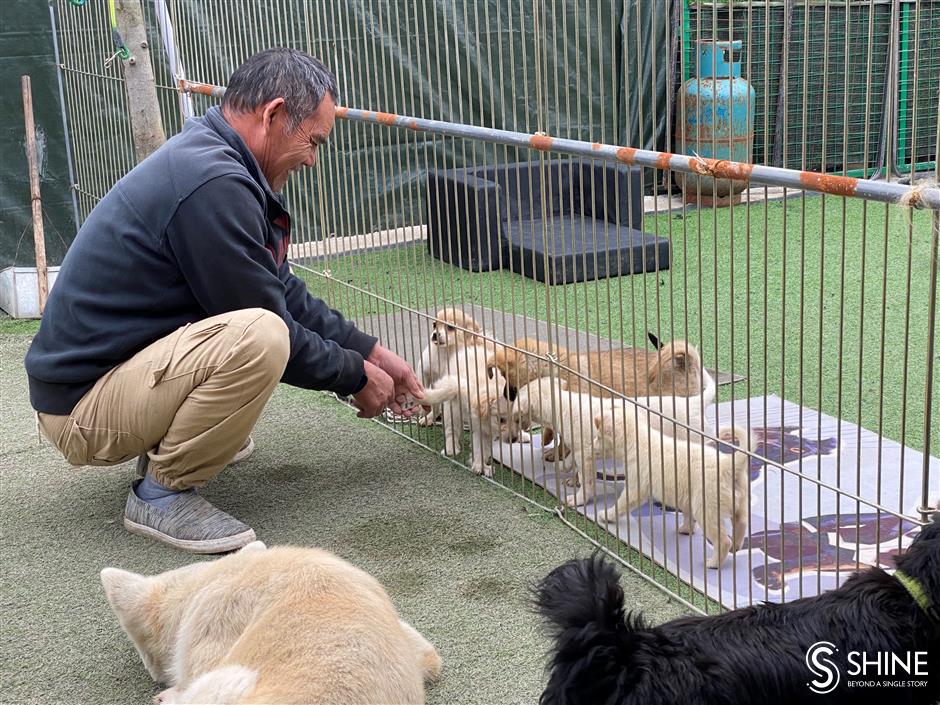 The incident in Jiading was not a single case. On May 3, an animal rescue organization in Chengdu, southwest China's Sichuan Province, found more than 160 boxes of puppies and kittens at a delivery service station, waiting to be transported to various destinations around the country. Concerned citizens called the police. Two courier companies responsible for it were fined 30,000 yuan (US$4,700) and 50,000 yuan respectively.

Since then, many similar cases have been discovered throughout China, including other Random Pet Box sales.

According to current law, living animals are not permitted to be delivered via post or express services, but that doesn't always stop nefarious business people from trying.

"We can only ask people not to buy pets online. When there is no market, there's no business," Zhou said.