Whether it’s a quick appetizer to entertain guests or an impressive main entry to wow the crowd, the simple yet satisfying meatball is an enduring kitchen creation around the world. Think Swedish meatballs. Think Italian spaghetti and meatballs. And think China.

Meatballs are called wanzi in Chinese, a name that describes the shape and can encompass vegetarian versions made with ingredients like tofu and white radish.

In soups, hotpots and other dishes, wanzi is always a crowd pleaser.

The top rule for making good Chinese meatballs is using high-quality ingredients. For the mince, the meat should be finely chopped by hand to achieve an ideal texture. Using a food processor is not recommended. Eggs can be added to help bind the mince together.

Vegetables with a crunchy texture, like lotus root or water chestnuts, also can be added for improved flavor. Crumbs of leftover steamed buns are sometimes added to keep the meatballs fluffier.

To form the meatballs, the most common method is to place some mince paste in the hand and squeeze a small ball from the part of the hand between the thumb and index finger.

By mastering the right tempo, one can make batches of meatballs of similar sizes very quickly.

Bigger versions like the lion’s head are made by shaping the mince paste with the hands until a smooth surface is achieved.

Cooked meatballs can be prepared in batches and kept in the freezer for later use. 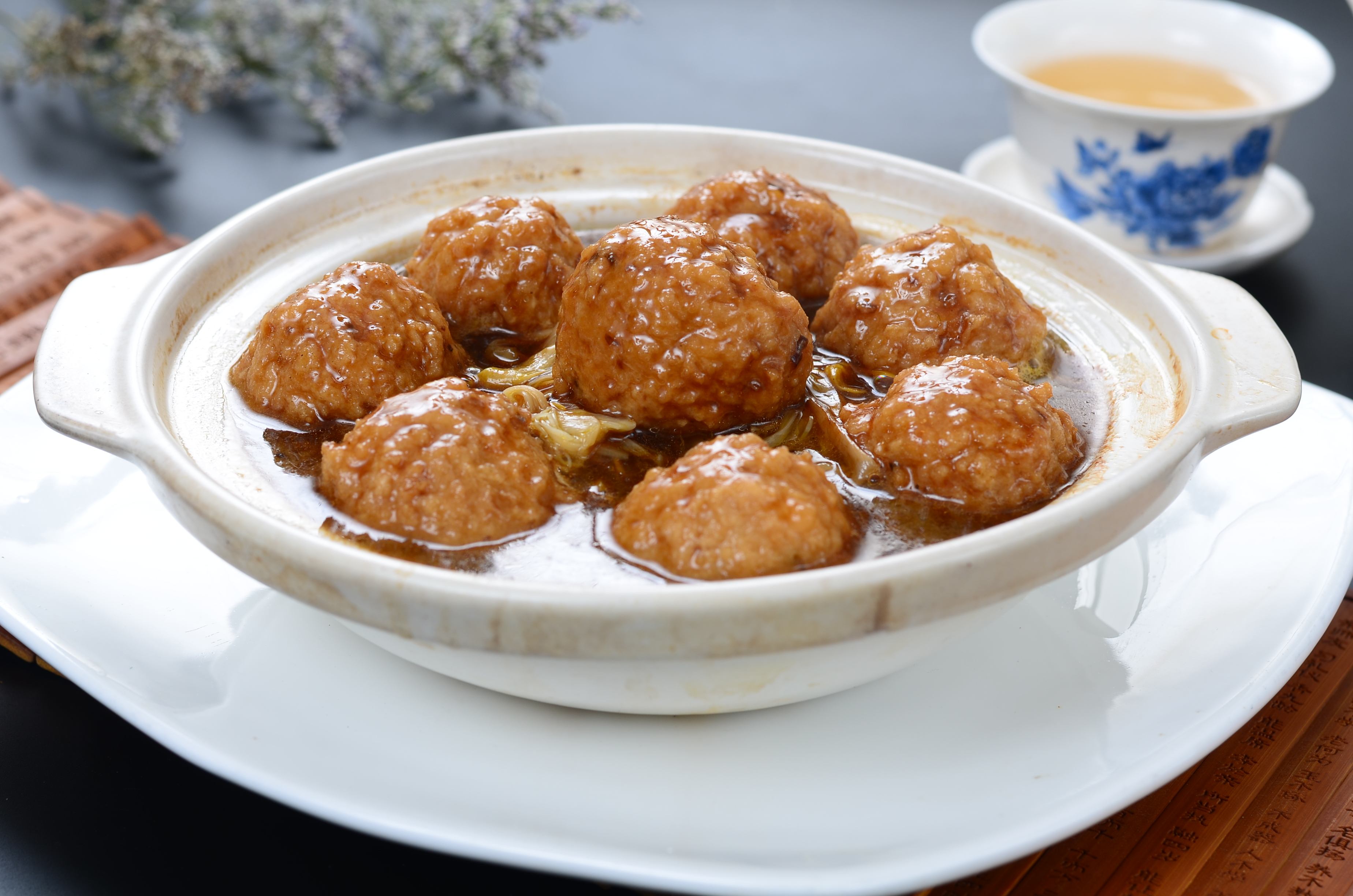 The lion’s head, or shizitou, is a staple dish from Huaiyang cuisine and a centerpiece at banquets and formal dinners.

The dish dates back to the Sui Dynasty (AD 581-618), when Emperor Yang traveled to Yangzhou. A chef there created four dishes to represent the city’s four famous landmarks, and a sunflower seed paste was used in the original lion’s head.

Unlike small meatballs, lion’s head is a soft and smooth meat dish that can be steamed, braised with soy sauce, or cooked as a clear soup.

It is often accompanied by bok choy for a touch of green. Meatballs of the size of a fist are made with 60 percent fatty meat and 40 percent lean meat, mixed with green onions, ginger and eggs.

Another notable meatball dish in China is si xi wanzi, or “meatball of four joys.” It’s often confused with lion’s head due to a similar cooking style, but si xi wanzi is derived from Shandong cuisine. It features four meatballs that symbolize luck, fortune, prosperity and happiness. The meatballs are made of minced pork and water chestnuts, and are often served as the final dish at wedding and birthday banquets. 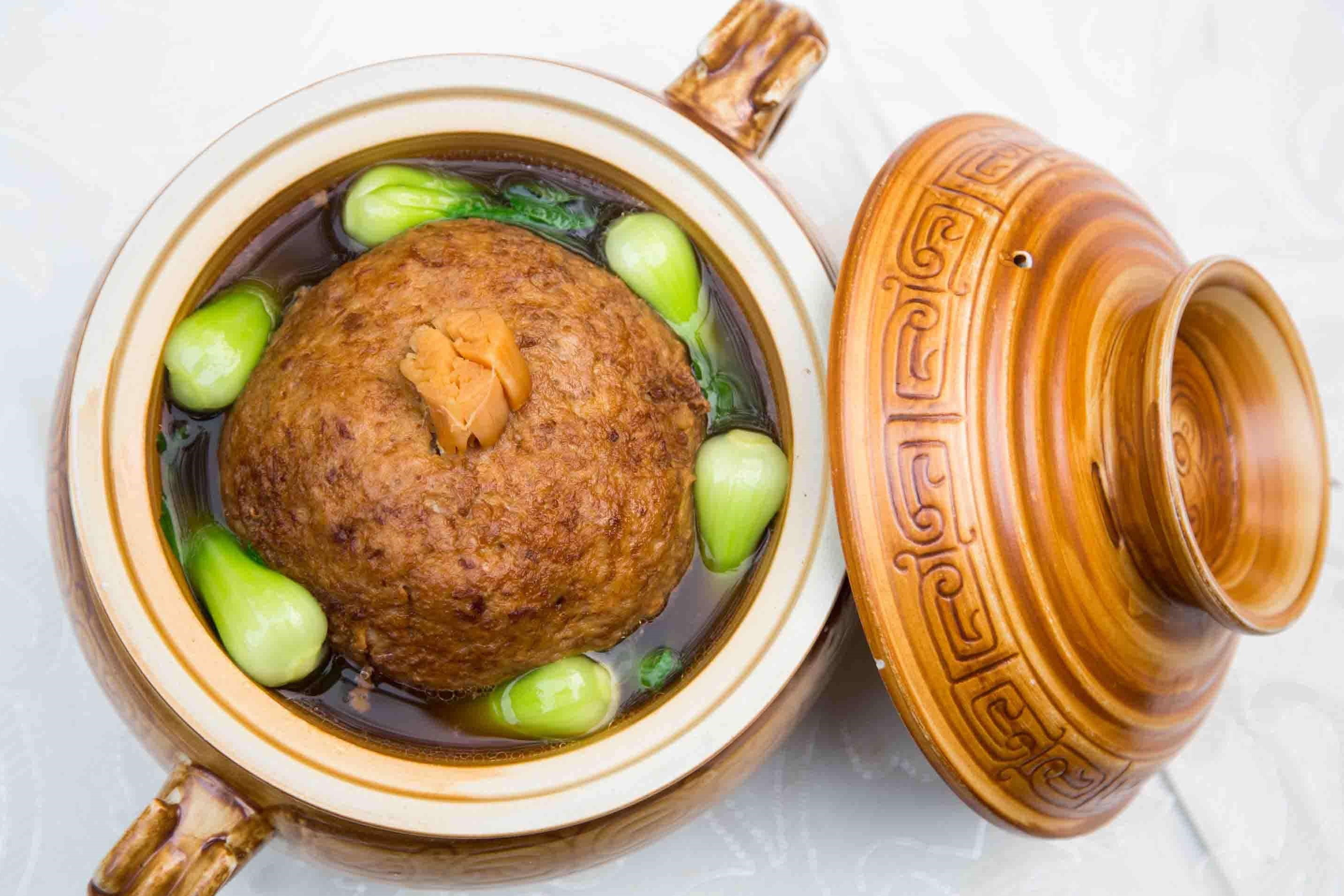 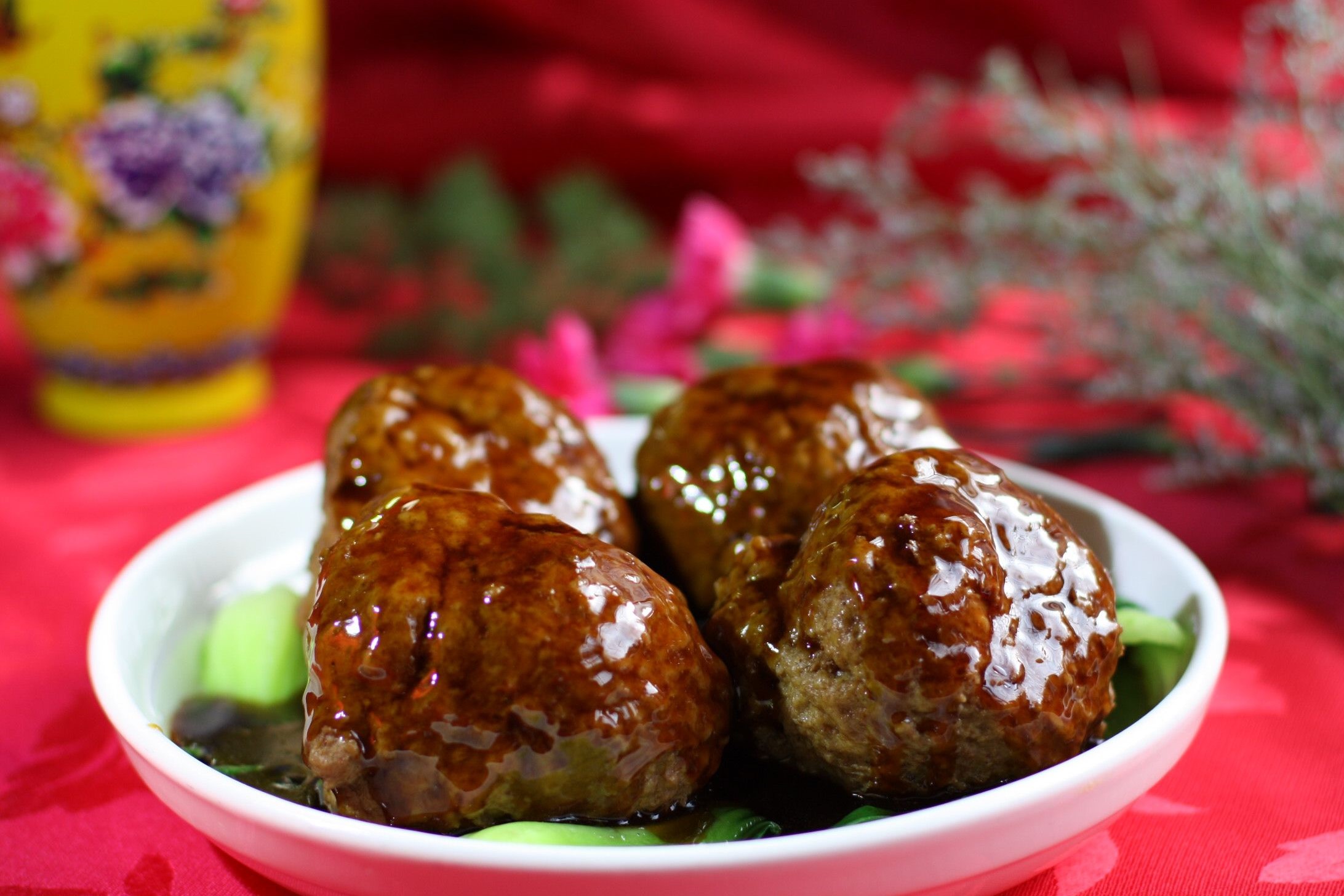 Meatball dishes like lion’s head can be quite heavy, especially in summertime. That’s when lighter flavored fish balls come into favor.

Made with either sea or freshwater fish, there are many versions of fish balls in East Asia, like the Hong Kong-style curried fish ball served with white radish.

When working with fish, it’s important to choose varieties with dense meat, like eel, yellow croaker and mackerel. After carefully removing the flesh and bones from the fish, the meat is pounded into a paste, with added sweet potato starch, ginger juice and salt. Once the balls are shaped, they are popped into boiling water and can be served as a simple soup.

Fuzhou-style fish balls from southern China differ from the plain white version. Inside a soft layer of white fish paste made of eel or freshwater fish is a filling of minced pork or shrimp, giving the fish balls added depth of flavor and texture.

In Taiwan, fish balls come with or without fillings, and include versions such as cod and cheese fish balls, cod and tofu, and lobster balls. 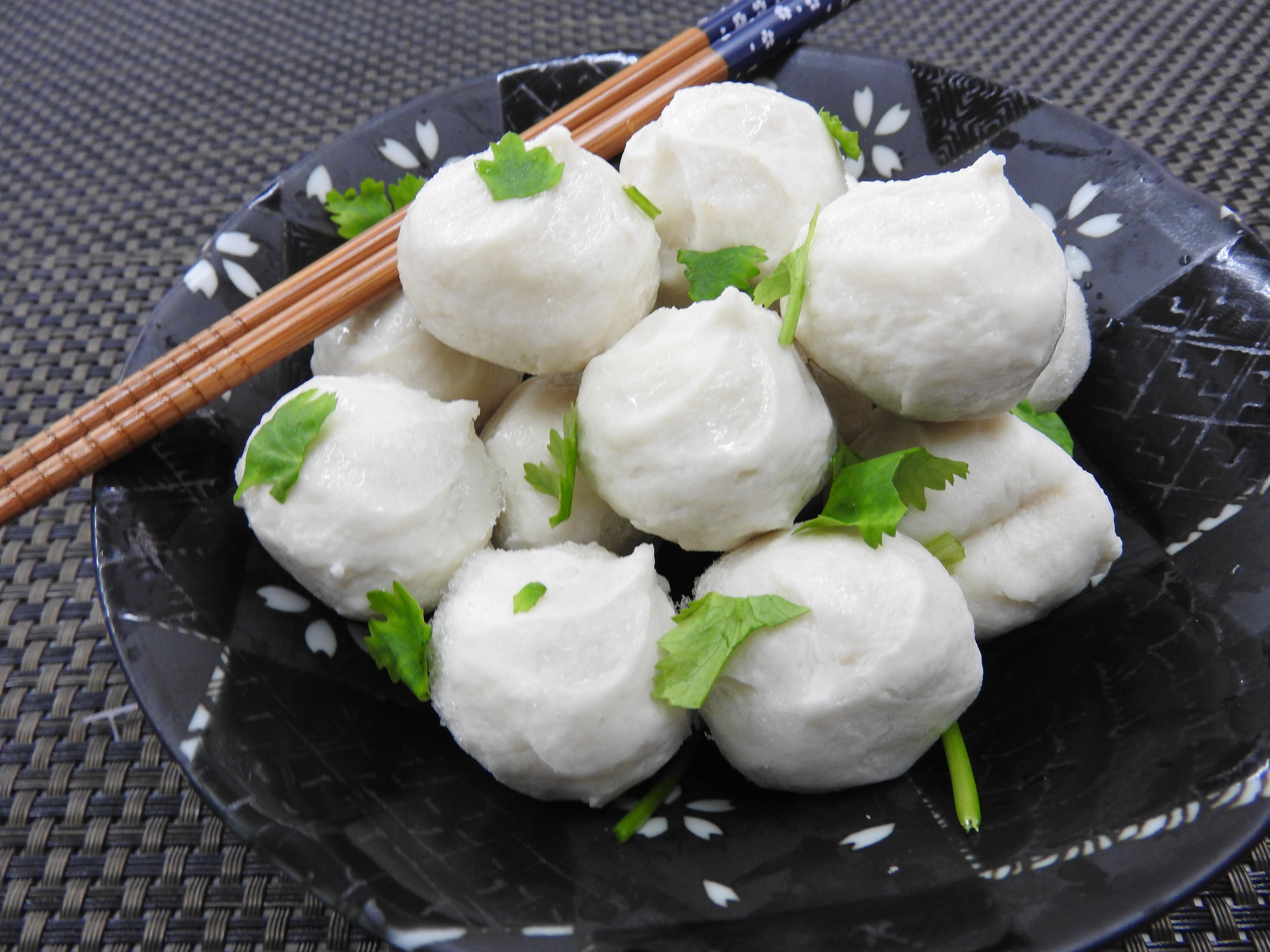 When Chaoshan-style beef hotpot became all the rage in Shanghai in 2015, the region’s unique beef meatball was one of the most popular items on the menu. It’s so springy that one could toss it and see a bounce.

Chaoshan refers to the combined cities of Shantou and Chaozhou in Guangdong Province. The region’s cuisine philosophy is to preserve the original flavor and taste of ingredients. The signature meatballs are firm yet easy to chew. The juices from inside the almost crunchy meatballs cause an explosion of flavors in the mouth.

Fresh round beef is cut into chunks after the connective tissue is removed and then placed on a big cutting board. The meat is pounded into a paste with two square-shaped hammers that weigh 3 kilograms each. Then seasonings and a little bit of starch is added, followed by another round of pounding.

The paste is poured into a big container and a few fatty beef pieces are added and then stirred until the paste sticks to the hand. The meatballs are made by squeezing the paste with a fist and then scooping it off with a spoon. The finished balls are boiled for eight to 10 minutes.

A simple Chaoshan-style snack is a beef meatball soup that simply cooks the meatballs in a beef broth and seasons it with sesame seed oil, white pepper powder and finely chopped celery. The dish is often served with satay or chili sauce on the side. 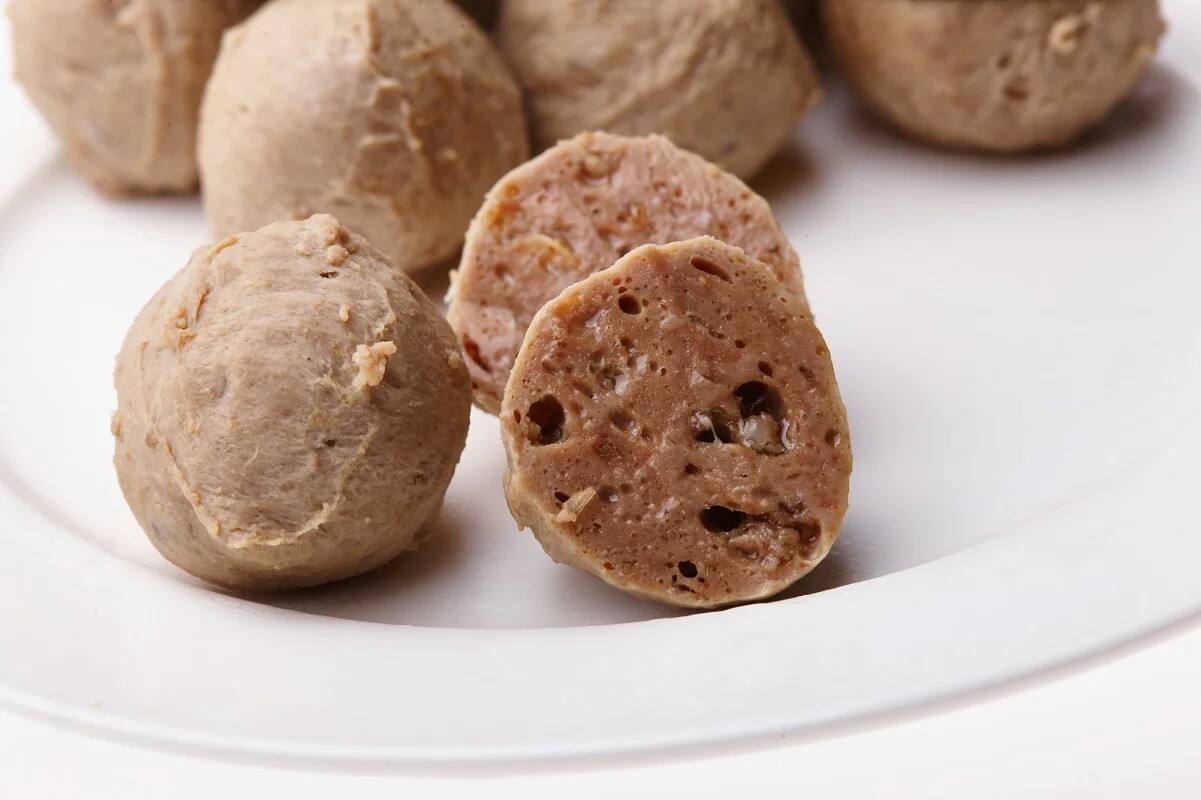 Meatballs don’t necessarily have to contain any meat. Vegetarian versions are also popular.

Tofu balls are made from crushed tofu, shredded carrot, beaten egg, green onion, and ground peppercorns. They are fried and then eaten directly or used in other dishes.

There are also radish balls made of shredded daikon radish, eggs and flour.

Lotus root can also be turned into wanzi by shredding the roots finely and mixing them with ginger and egg.

Combining steamed sweet potato paste with some flour makes a sweet wanzi to serve as dessert. 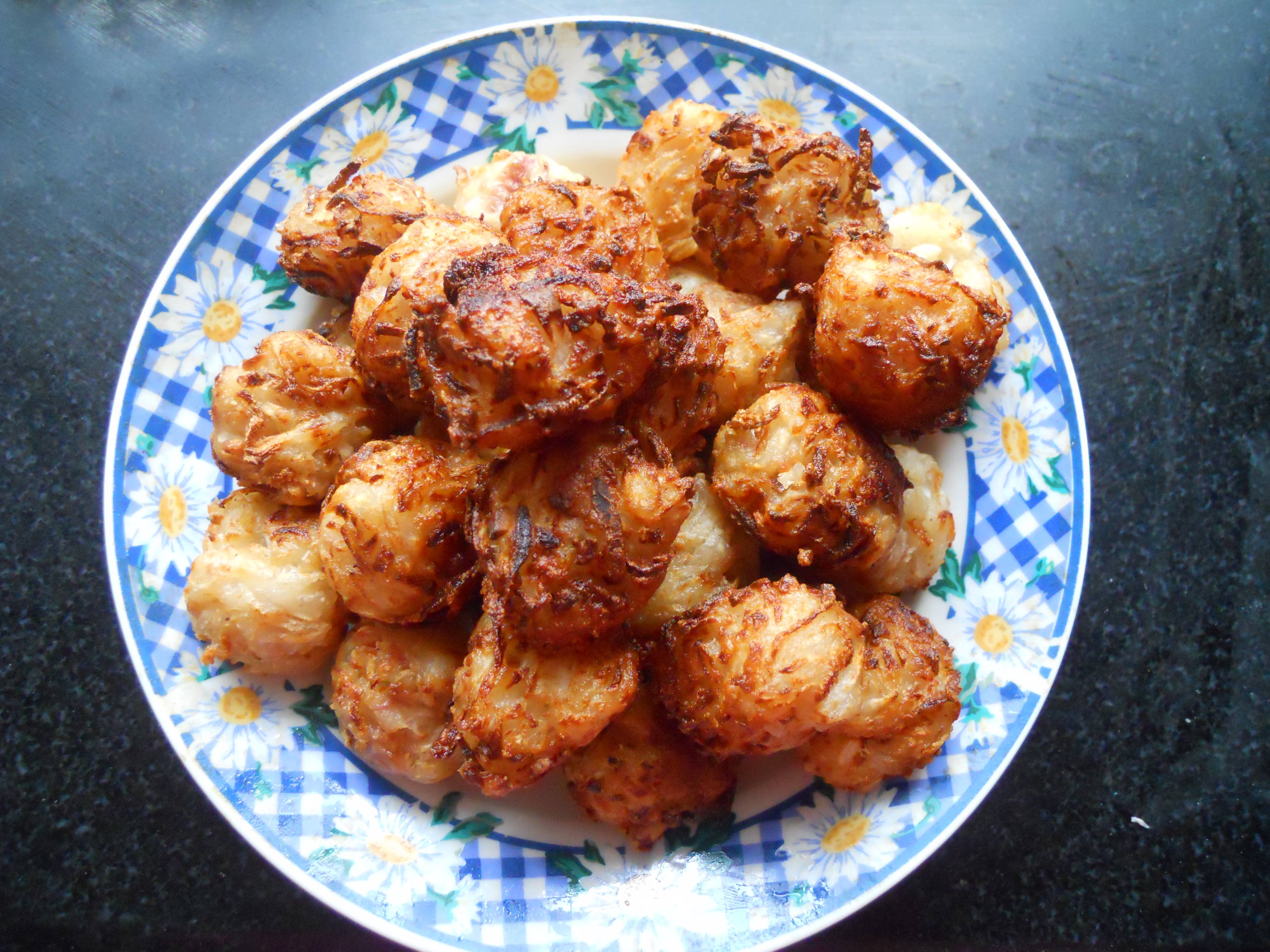