Moroccan cuisine owes much of its richness to the mix of culture that has existed in the kingdom for centuries.

Moroccans inherited simple, country dishes from their Berber ancestors; integrated exotic spices from Arabs, who arrived in the 7th century and mixed it with the sweet and savory of Andalusian cuisine.

They’ve also borrowed cooking methods from the Ottomans, such as kebabs, Mechoui and sweet pastries commonly seen in the souks.

A visit to Marrakech, the country’s tourism capital, reveals it all.

Enveloped in a sea of colors and smells, a visitor, who ventures into the medina, can embrace a magical world.

Farmers sell their produce fresh from the ground and weigh fruit and vegetables on small traditional scales.

Vendors set up stalls in the medina offering local fruits in Marrakech.

Local vendors take roast lamb straight out of underground clay-pit ovens and chop them into chunks, and visitors quench their thirst with mint-flavored green tea while enjoying delicious aromas of tagines cooked on clay hearths.

You can find something to eat at any time of the day or night in the medina.

As evening falls, the city’s main square, Djemaa El Fna, is probably the biggest stage for food vendors firing up their grills — and for touts using their best (but often annoying) lines to get tourists to dine at their stalls. Everything is served from sheep’s heads, snail soup, to different kinds of grills and tagines.

My best street find, however, was the Mechoui lamb vendor hidden inside a small alley not far from Djemaa El Fna. The baby lamb is cooked whole in a fire pit deep in a underground clay oven for about six hours.

The establishment only opens for lunch so arriving early is recommended if you want to get the best choice of cuts (shoulder) straight out of the oven. 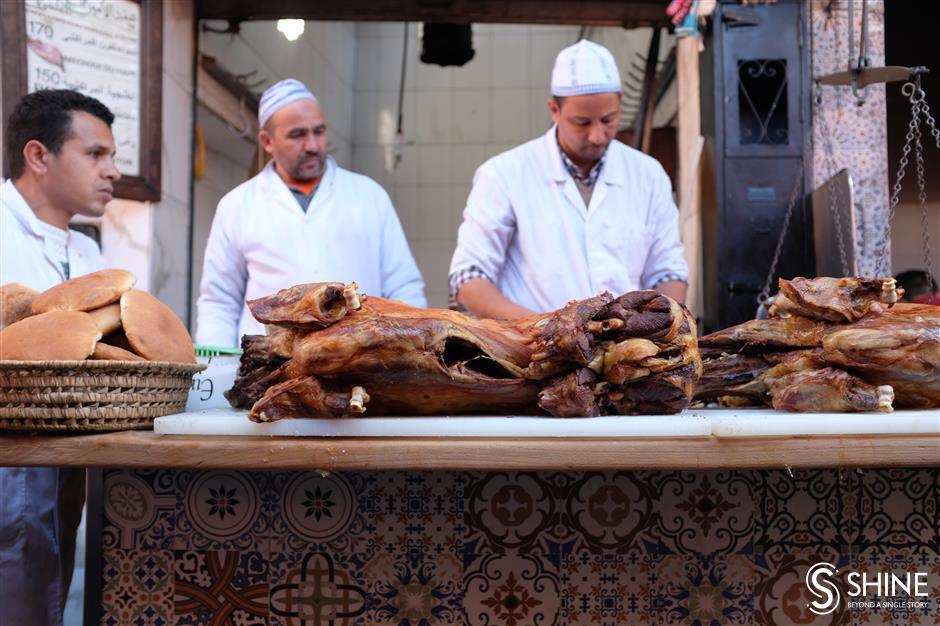 The Mechoui lamb vendor, hidden inside a small alley not far from Djemaa El Fna, only opens for lunch. The baby lamb is cooked in a fire pit deep in a underground clay oven for about six hours.

The slow-cooking method means the lamb melts in your mouth. It is tender and deliciously spiced with salt and cumin.

The culinary journey should start by sampling different types of tagine — the near-synonymous Moroccan offering cooked and served in a cone-shaped clay pot. Tagine can be found throughout North Africa in all domestic kitchens and the tagine pot is the most widespread cooking utensil in the country.

In Marrakech, you find most chicken, beef, lamb and vegetable tagines are slowly cooked with common spices like turmeric, cumin, saffron, ginger as well as nuts and fruit.

The tagine traps the liquid which results in the broth bursting with sophisticated flavors from the meat and spices.

Tagine is best experienced in a riad where home cooks serve more authentic takes on the norm.

Try the classic chicken tagine with preserved lemon and olives or the lamb or beef version with sweet prunes.

At a typical family table, dishes follow one after another. A series of colorful salads, pastillas (a kind of meat pie), grilled dishes, main staples such as tangia or tagine. Bread (kesra) is often used as a spoon.

Don’t miss out on tangia during a stay in Marrakech. Tangia refers to both a dish and cooking apparatus — an earthenware urn. It’s covered in a parchment and takes longer to cook on wood-fired ovens to get the confit-style stew. The tender meat falling off the bone is irresistible. 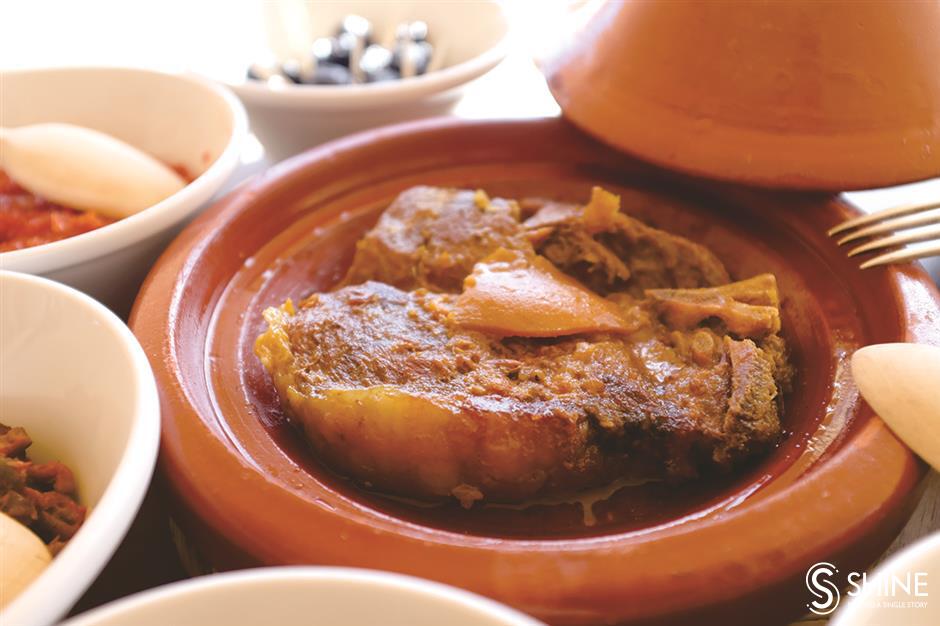 Tangia is a typical dish in Marrakech which takes long hours to cook to get the confit-style stew.

Friday is the day for soft, buttery couscous. It is a most convivial dish for after prayer or served on traditional festive occasions.

Couscous is often covered with meat and vegetables, depending on the season and the region where it is prepared. Sharing melt-in-your-mouth couscous is always a festive experience.

There’s plenty of great traditional fare found in the vendors or high-end restaurants in Marrakech, depending on your budget.

For a decent but not over-the-top experience, head to Al Fassia, run by women. To get the idea of Marrakech cuisine in one meal try a nine-dish mezze starter to lamb tagine — slow roast lamb shoulder studded with almonds.

Tradition aside, the city’s food scene is having a moment.

Resident expats are making their mark with dazzling new restaurants that mix trendy design with an innovative, international spin on the classics. 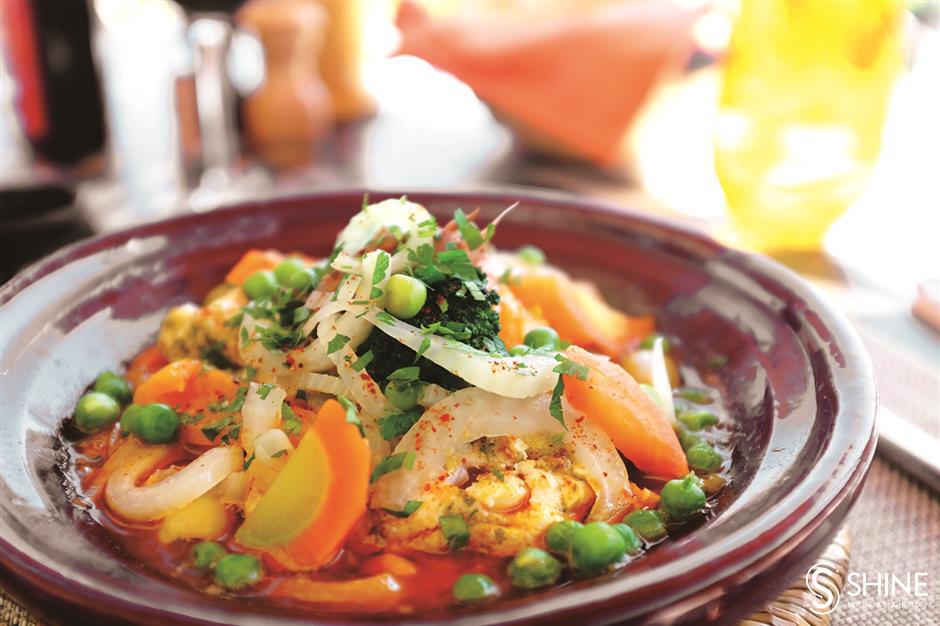 Tagines are commonly found in Morocco, which are slowly cooked with common spices like turmeric, cumin, saffron, as well as nuts and fruit.

There is a trend inside medina where hip, sun-splashed roof terraces are opened one after another, with healthy, Mediterranean-style menus and Instagram-chic décor. The latest openings include L’Mida and Kabana.

Kabana, with its tropical spirit, attracts a local party crowd and tourists alike for its cocktails and international menu.

Nothing caps a day of triumphant souk shopping like a relaxed lunch or dinner in a garden oasis inside the medina.

Le Jardin and La Famille are the best finds.

You can pick a seat beneath a canopy of banana leaves, bamboo and palms, retreat to the tree shades and order a light Moroccan salad or vegetarian pasta, accompanied by a fresh juice or detox drink.